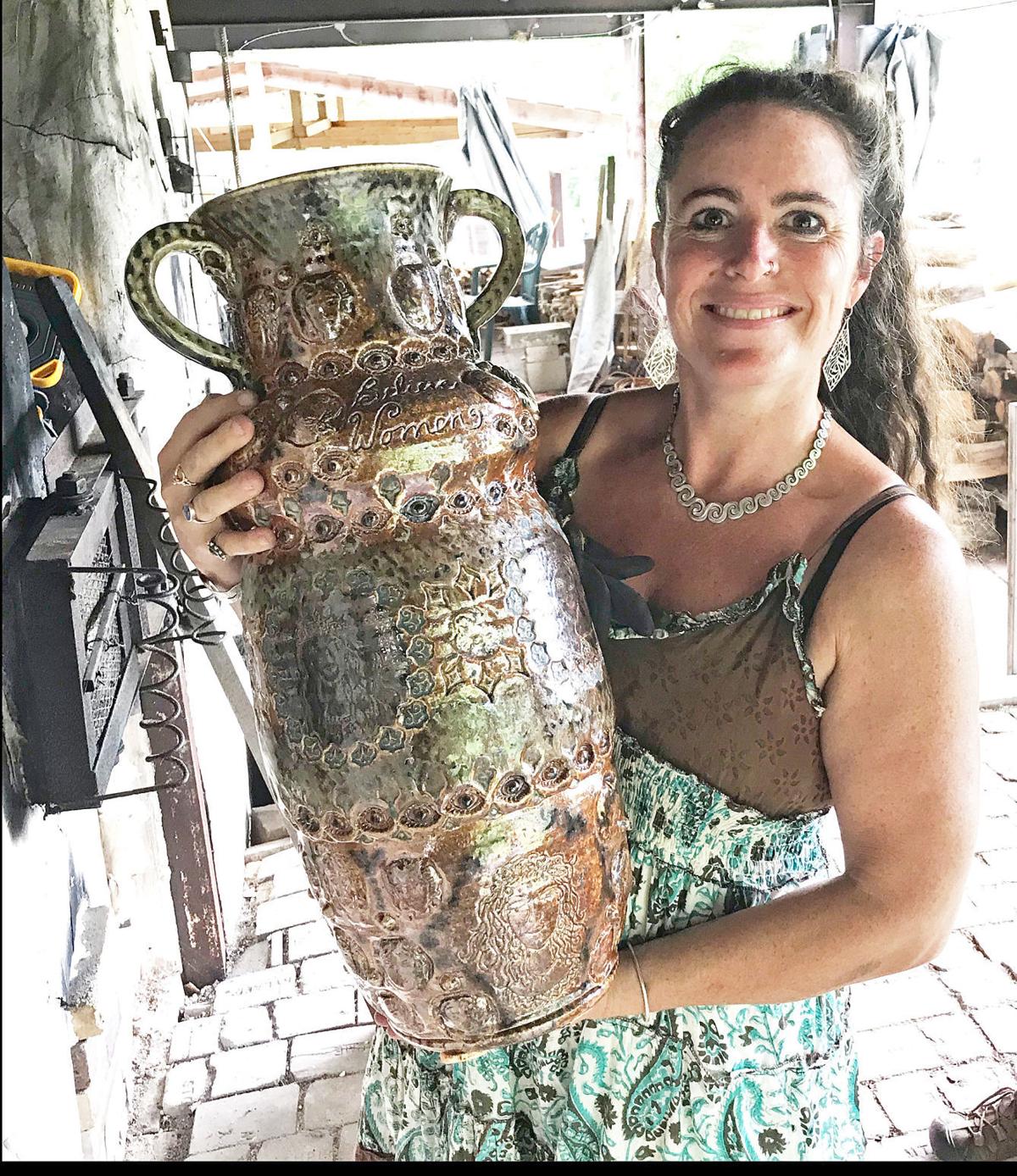 Pocasset artist Kimberly Sheerin holds “Believe Women,” a heavily embellished vase representing women all over the world who lack a voice. The vessel is part of the “Look This Way” show at the Cahoon Museum of American Art. 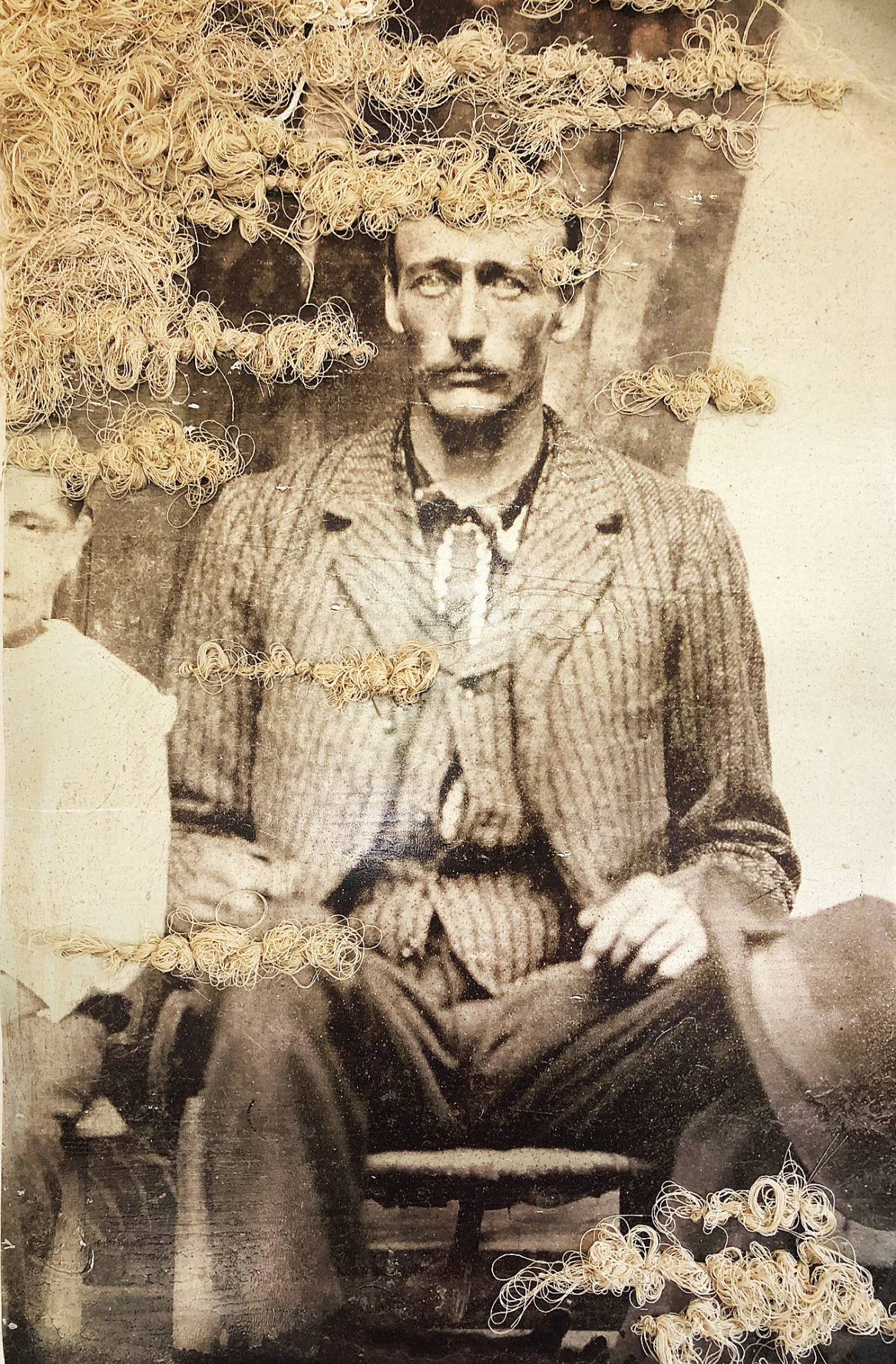 Pocasset artist Kimberly Sheerin holds “Believe Women,” a heavily embellished vase representing women all over the world who lack a voice. The vessel is part of the “Look This Way” show at the Cahoon Museum of American Art.

As a counterpoint to the museum’s daguerreotype show, the Cahoon Museum of American Art has also mounted “Look This Way,” a show by three local women artists offering their own interpretations of the expansive show on early photography.

“Look This Way,” featuring work by Jodi Colella, Jackie Reeves and Kimberly Sheerin, comprises almost all of the museums upstairs galleries, some of them displaying contemporary art for the very first time.

All three artists are presenting work “specifically in response to the downstairs show,” said marketing and special projects consultant Annie Dean, who added, “It’s our way of connecting contemporary art with historical art in a way so that when you experience it here at the museum it all makes sense.”

The three artists didn’t collaborate on their work but instead met together several times with Ms. Dean to look at the daguerreotypes and talk about their interpretations. “The meetings we had were great in terms of sharing artistic ideas and processes,” Ms. Dean said.

For her two rooms, Barnstable artist Jackie Reeves contributed several large works painted on aluminum, as well as several on canvas. The inspiration for the images were drawn from family photographs and old family movies. The images relate to the downstairs exhibit of early photographs on several levels. Described by the artist as “Memory Paintings,” Ms. Reeves questions how accurate the memories we have really are. “She’s investigating what we remember and how we remember it,” Ms. Dean said.

In some of the images Ms. Reeves has painted and then wiped away some of the imagery, exploring the idea of time erasing memories. In addition to the theme of memory and recollection, the metallic aluminum “canvas” recalls the shiny silver surface of the daguerreotypes. The photographs have a feeling of familiarity and old-fashioned comforts; a mom setting the table, a family at the waterfront.

Pocasset potter Kimbery Sheerin has created several large vessels and other objects in response to the show. Known for her elaborate and ornamental vessels, Ms. Sheerin responded most strongly to the highly decorative frames and cases that protect the daguerreotypes and could be considered small works of art on their own.

Taking a maximalism approach, Ms. Sheerin’s large vessels and smaller pieces use repetitive patterns and textures stamped or adhered using slip trailing or drawn in sgraffito to cover her large earthenware vessels. The results are breathtaking, with what seems like an entire world of information contained in each vessel.

As someone already interested in the subject of human trafficking, Ms. Sheerin was also drawn to the several daguerreotypes that contained images of slaves with their owners. Many of the new vessels play on this theme. “Slavery in the U.S.A.” features drawn images of four women in the present day who were trafficked into the United States. “Slavery did not end in 1863 with the Emancipation Proclamation but still exists today,” Ms. Sheerin says in her wall text. “Seven Types of Slavery” illustrates the practices of forced labor, bonded labor, domestic work, forced begging, circus performing, child soldiers and sexual exploitation.

“Read My Lips” is a large pitcher, stamped and decorated with colored swirls, shapes, flowers and even the eye of Ra. The pitcher also contains a drawing of three women in a circle frame above a banner that reads, “Believe Women.” The words and imagery refer to the statistic that two-thirds of women in America are sexually assaulted in their lifetimes.

“The thing about Kim’s style is that you look at it and even though the subject is human trafficking, it’s beautiful, not depressing,” Ms. Dean said.

Another piece features portraits of four women of diverse ages and backgrounds who are working to make changes locally and globally: Greta Thunberg, the teenage Swedish climate activist; Taran Burke, who founded the Me Too movement; Aloka Mitra of Calcutta, India, who founded the Women’s Interlink Foundation; and Jesse Little Doe Baird of Mashpee, who is working to revive Native American language.

“It’s a combination of decoration and deep meaning and then this simple way that she presents the portrait,” said Ms. Dean, adding, “They’re done on dark clay with dark glazes, you have to get into them to really see them.”

Long before the daguerreotype show at the Cahoon Museum, Somerville artist Jodi Colella had been collecting tintypes and other old photographs.

One of the things that struck her was that a lot of the images of men had names associated with them, but none of the women did. In response to that Ms. Colella started a series she titled “Unidentified Women,” in which she took original tintypes and embellished them using her preferred medium—fiber arts. The tiny portraits with even smaller embellishments using thread are in contrast to the over-sized scorpion by Mr. Colella that dominated last year’s “Twisted, Twined, and Woven” show at the Cahoon.

“Jodi is very project based,” said Ms. Dean, explaining that when she’s involved in a new project Ms. Colella might learn a whole new technique to execute it.

When they are blown up, a lot of the images look sinister. Titled “Disappearing Act,” a photograph of two sisters, dressed alike with their hair severely styled, makes you think of the ghostly twins from “The Shining” movie. A photograph of man seated next to a boy in “Sheeps Clothing” looks innocent enough at first but when you have a photograph and no other information to accompany it, one can make up one’s own story—is the man the boy’s father, a cruel employer or some other predator? It’s rare to see anyone smile in old photographs, so determining whether a relationship is happy or strained is left up in the air. Certainly Ms. Colella wants her audience to think beyond the surface.

“Look This Way,” along with the daguerreotype show downstairs at the Cahoon, will be on view through October 30. A Fall Open House will take place Saturday, October 12, from 10 AM to 4 PM at the museum, offering the public a chance to meet the artists and tour the museum. Jackie Reeves will hold an open house at her Barnstable studio, 3328 Main Street, Sunday, October 20, from 1 to 4 PM.