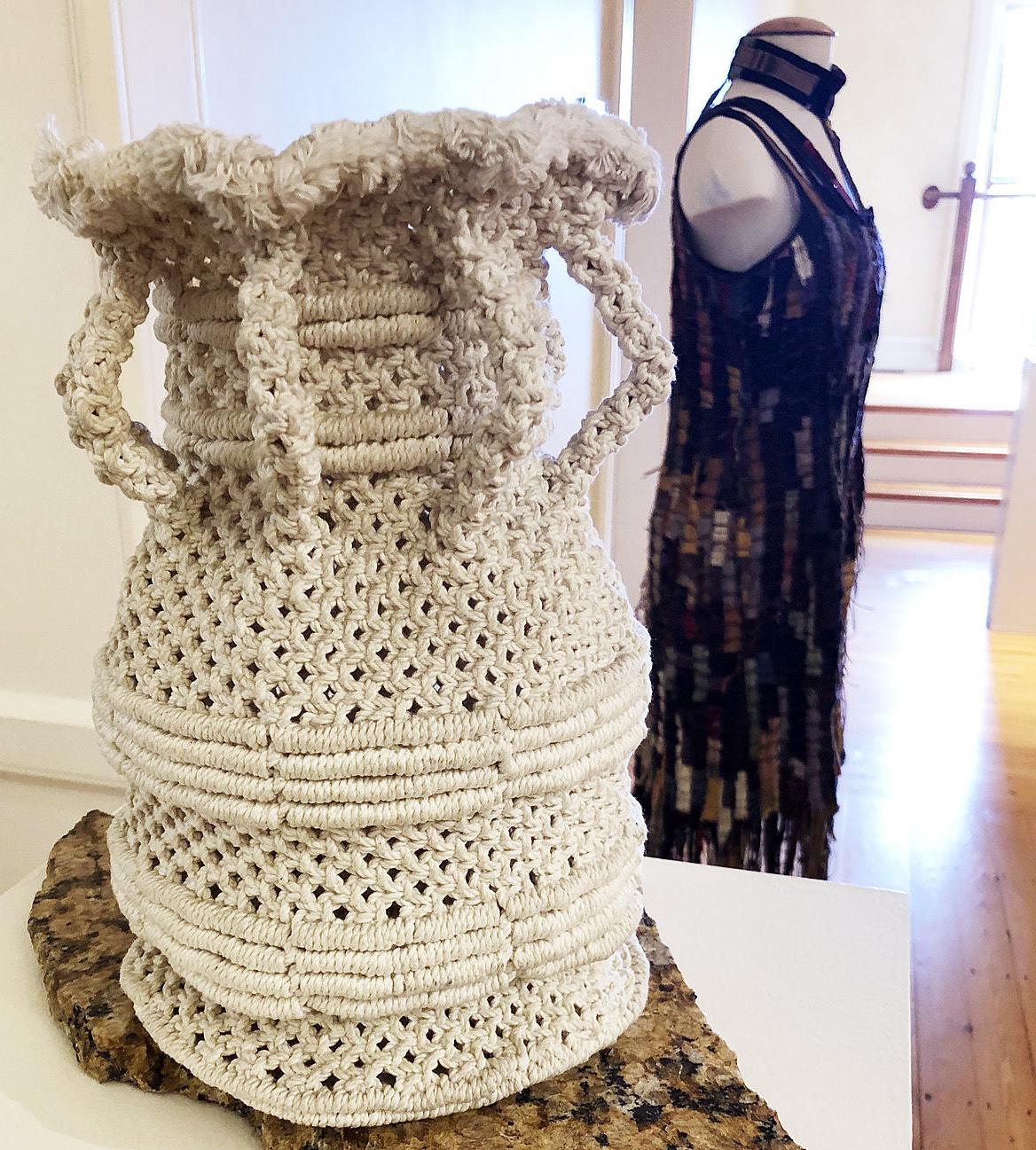 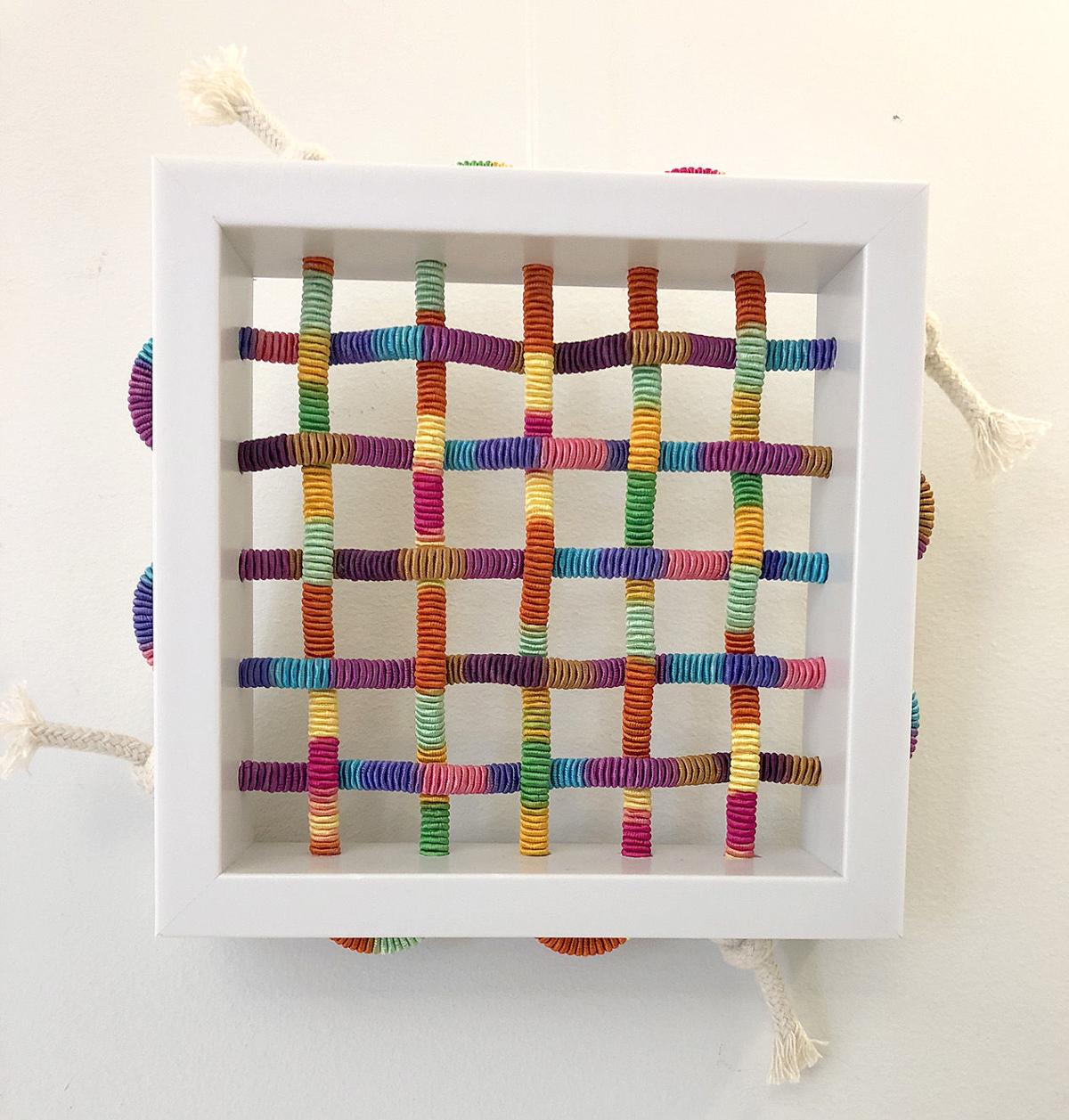 “Daybreak #1703” by Jóh Ricci is made from plain weave, rayon, rope and other materials.

“Daybreak #1703” by Jóh Ricci is made from plain weave, rayon, rope and other materials.

Highfield Hall & Gardens explored rope as art four years ago when land art artist Peter Hutchinson created a Thrown Rope installation on the grounds using rope to map out a design for boxwood plantings, and again last winter when New Bedford boat captain Tony Alvernaz made a special trip to Highfield to coordinate looping and knotting rope on Highfield’s grand staircase as part of Holidays at Highfield’s homage to the Cape’s seafaring past.

The year Highfield has gone all the way, as it were, with a featured exhibit exploring rope as an art medium.

Like fiber arts, using rope as an art medium can be done in countless ways, including some that preserve the rope in its recognizable form and others that disassemble the strands, making them into completely new forms.

The Highfield show, “Unbound: Contemporary Rope Art,” which is on view through October 31, features the work of 20 artists, including some local and others from as far away as Hungary. The different takes on the subject are vast; there’s recognizable works, sculptures of animals and vessels, lace jewelry and landscapes, as well as pieces that celebrate rope in its truest forms, inviting the viewer to see rope in a new way while still seeing rope in its conventional form.

Marcia Young, publisher of Fiber Art Now, curated the exhibit, defining rope loosely as “any cord or strings of fibers united by being twisted, braided or threaded together.”

Asking one to see rope in a different way first requires asking one to see rope at all. So ubiquitous as to barely register on the scale of our consciousness, rope dates back, according to the Highfield wall text, at least 30,000 years. With all that past history, rope is still an important tool, one that’s been especially useful here - in a part of the country with a rich maritime history; just ask any young sailing students who have been made to practice their bowlines and half hitches in the clubhouse on rainy summer days.

Exhibit pieces have been installed in both the upstairs and main floor of the mansion, and even outside on the grounds. Sizes vary from tiny to oversized.

Some of the works that most spoke to me were the ones in which the original rope can still be seen, even as it is incorporated into the art. Works by New Bedford artist Alex Buchanan especially used large, rough-looking ropes manipulated or arranged into different configurations. Mr. Buchanan is both an artist and a member of the merchant marine. His pieces speak to both the usefulness of rope and the beauty inherent in its complexity. “Weathered Together Again,” a coil of nylon, polypropylene and manila morning lines, is reminiscent of meticulously coiled ropes on boat docks and speaks to the idea that even in our hurried lives there’s time for beauty, and that aesthetics and utility should not be two different things.

I also enjoyed the work of Adrienne Sloane, especially her large knit pieces that emphasize the beauty of different knots. Like coiled rope, we know intrinsically that perfectly constructed knots are both strong and beautiful, hence the superiority of the square knot over the granny knot. “I knit to rejoin the frayed and unraveled places around me,” Ms. Sloane says in her artist statement.

Hungarian artist Agnes Herczeg has deconstructed rope, using individual fibers to weave a lacy still-life, not more that three inches square, of a woman hanging laundry. Highfield provides a magnifying glass next to the piece so museum goers can further examine the tiny design.

And while art should and does stand on its own without extensive wall texts and artists statements, several of the statements in this show were particularly compelling. From those statements and descriptions I learned that Windy Chien’s background in fiber arts began with macramé and that in 2016 she embarked on a project she called “A Year of Knots,” in which she endeavored to learn a new knot every day for 366 days.

Alan Canners of Colorado metamorphosed from lawyer and professor to professional fiber artist in his 50s while Jóh Ricci of Gettysburg, Pennsylvania, got started in fiber arts when her great aunt taught her to crochet at age 8. Mr. Canners’s sculpture of a rainbow trout, one of four works by Mr. Canners in the show, is flabbergastingly beautiful.

The exhibit also includes an activity room where anyone can try his or her hand at knotting, as well as get up close with the different materials used to create rope, from natural sisal to polyolefin.

Admission to the mansion is $8 for adults and $5 for seniors. Children under 12 and active military are admitted free.