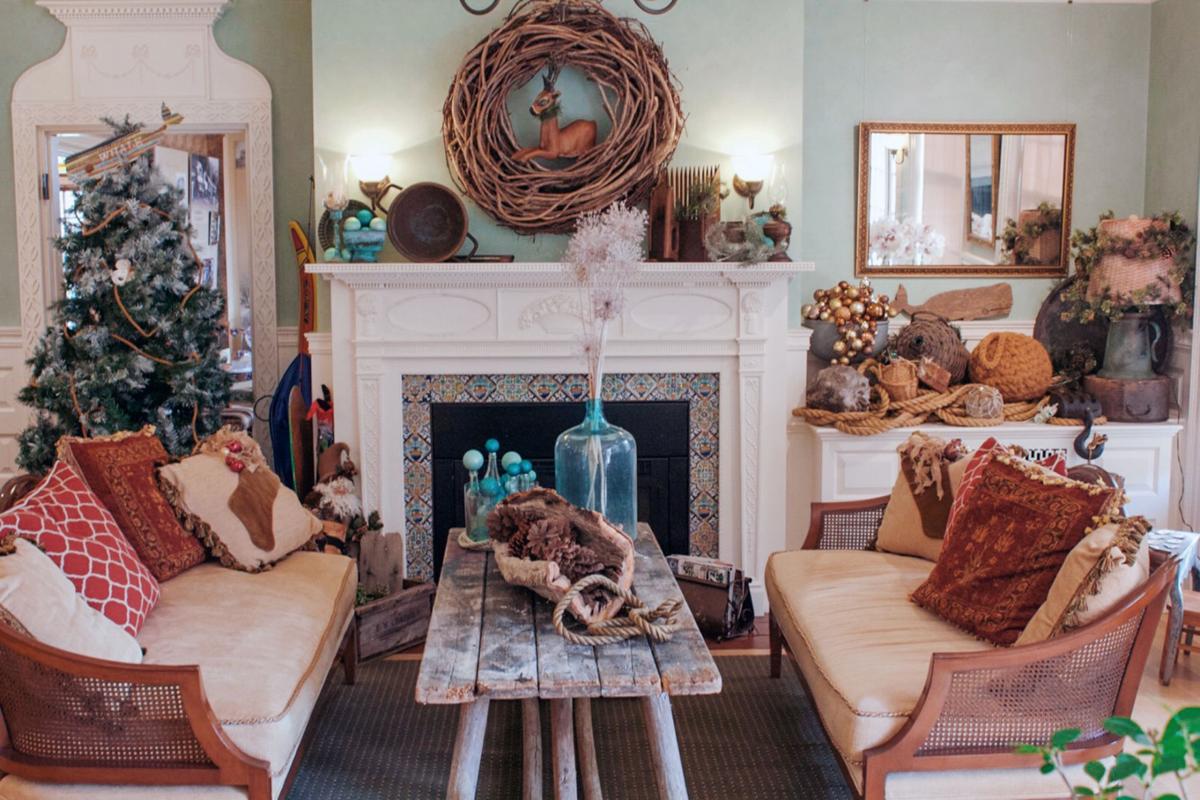 Natural and nautical decorations begin to take shape in Highfield Hall’s ballroom in preparation for Holidays at Highfield. 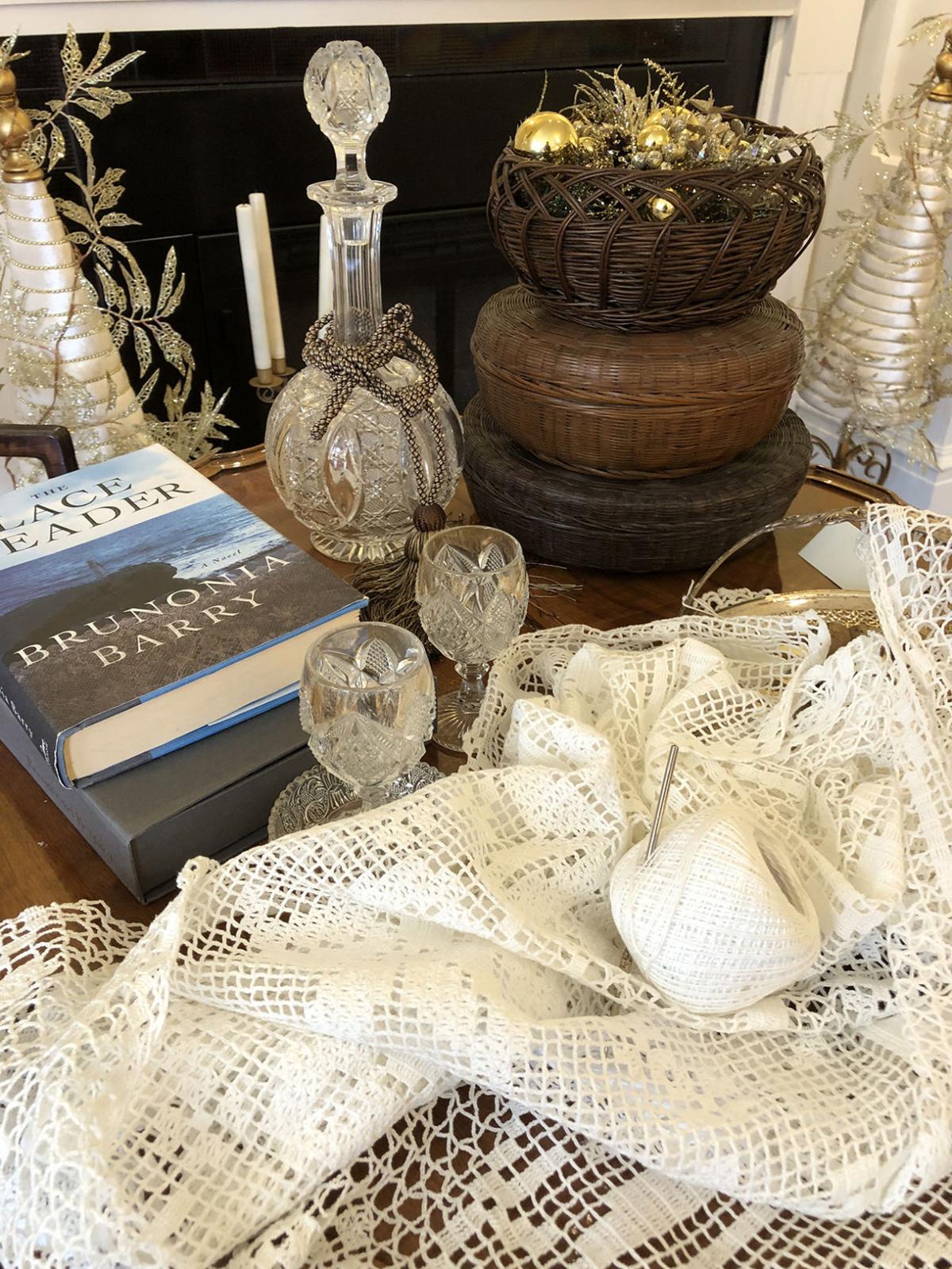 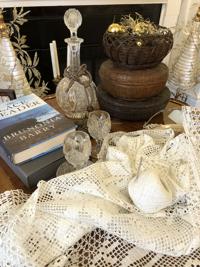 A display featuring needlework and glassware at Highfield.

Natural and nautical decorations begin to take shape in Highfield Hall’s ballroom in preparation for Holidays at Highfield.

A display featuring needlework and glassware at Highfield.

With safety protocols in place that have led to changes and perhaps the creation of a few new traditions, Highfield Hall will present its 14th annual Holidays at Highfield on select days beginning Friday, November 27 through December 13.

“We knew that if we could do it, we had to do it,” said Tara Burke, co-executive director and chief operating officer at Highfield. “We’ve been getting so many inquiries asking if it’s happening, we knew we had to be here for the community.”

While things might look a little different, the mission is the same: invite visitors to experience the beauty of the grounds and the building decorated for the season. “It really is the most wonderful time of the year,” said Lisa Walker, co-executive director and chief development officer. “We’re getting back to the simple things and being thankful and appreciating what everyone loves about this time of the year.”

There will be a definite nod to safety and precautions, most notably in the call for visitors to pre-register before arriving at the hall and to sign up for specific two-hour time blocks to be inside the building. Once inside, arrows and signage will direct the flow of traffic, with visitors climbing one set of stairs to the second floor and a second set to come back down. Outside on the grounds, visitors can linger as long as they like. “The grounds are free. People can stay on them as long as they want,” said Ms. Burke.

New this year outside Highfield is the winter woodland village display created by different individuals and groups. Thirteen miniature displays are set up inside Patrick Dougherty’s 2019 Stickwork creation “A Passing Fancy.” The scenes include a gingerbread house, a fairy family sitting down to dinner, and tiny gnomes skating and roasting marshmallows around an even tinier fire pit. Highfield has closed off some of the entrances to the interactive sculpture in order to direct foot traffic in one direction.

A tiny village set up just outside “A Passing Fancy” is the work of floral designer Anna Holmes one of Highfield’s many program instructors, and some of her students.

“People love going around the grounds and discovering new things,” said Ms. Burke, “I think this might be the start of a new tradition.”

More programming than usual is planned for the grounds outside, including storytimes with Santa, music by the Victorian Carolers and a performance by Turning Pointe Dance Studio. A special story time on Saturday, December 12, at 2:15 PM outside at Highfield will feature storyteller Jackson Gillman.

Inside the hall there will be both free and ticketed events, including music by pianist Judy Fish, harpist Maria Rindenello, and classical guitarists Joe Scott, Ryan Christensen and Takamori Decker. Ticketed events include four gingerbread house decorating workshops and two holiday boxwood workshops. “We’ve added more classes to make up for the reduced number of participants we can safely have in each class,” said Ms. Walker, “especially the gingerbread house decorating. We’re trying to have more activities for families and children. To be more inclusive.”

Many of the crafts and workshops will take place downstairs in the billiards room where families can exit the back door rather than having to walk back through the hall. Drop-in activities include creating greeting cards, gift tags, holiday paper trees, and mini angel ornaments.

“It did take some planning, along with signage and stickers on the floor,” said Ms. Burke, “but I really feel that the protocols are in place and I hope people feel that they are safe.”

Protocols include pre-registration, limiting the indoor crowd size to 40 people, requiring people to use hand sanitizer and “douse before you enter the house.” People will be given a sticker when they check in, which indicates which time slot they are part of. At the top of the hour the staff will ring the bell to alert visitors of the time. “We want to ensure that people move along inside the hall in order to keep the numbers down,” said Ms. Burke.

One thing people will notice immediately upon entering the hall is that the gift gallery has been moved from its usual spot in the ballroom. “It’s on the second floor spread out through three areas,” said Ms. Burke, adding that there was plenty of room for people to spread out and shop. The gallery will also include a book nook, where Highfield’s culinary director Gail Blakely will have some of her cookbooks for sale.

Two overall themes pervade the decorations at Highfield: celebrating the holidays at home and the lyrics to the song “It’s The Most Wonderful Time of the Year.”

Event stylist Rita Pacheco has again put together beautiful and eye-catching decorations that will delight visitors with their simplicity and creativeness. Ms. Pacheco’s team of designers also includes Isabel Melo and Alda Barron.

George Chapman, landscape director at Highfield, has also had an important hand in bringing much of the beauty of the grounds indoors for visitors to enjoy, most notably the dried hydrangeas, which line the grand staircase and hang in the foyer of the hall. The same flowers that delighted visitors during the summer were cut and dried to be used in the winter display. Although it took advanced planning to cut and preserve the hydrangeas, Ms. Pacheco said that she and Mr. Chapman were just looking out the window of the hall one afternoon, saw them and knew they had to use them. “Sometimes you’re just in that moment and you look and see something,” she said.

“Everything has a bit of whimsey to it,” said Ms. Pacheco about the decorations, “you have to have fun with it.”

With the focus on everyone staying home for the holidays, Ms. Pacheco fixated on specifically staying home on Cape Cod.

As visitors enter the hall they will be greeted by several of Falmouth artist Karen Rinaldo’s iconic paintings portraying the town during the holidays. One even shows Highfield in its landscape. “People are not traveling; they are here in Falmouth,” said Ms. Pacheco. “A lot of folks are staying in their summer homes for the holidays, maybe for the first time. They may not have all their holiday accoutrements with them, so this is something of a wash-ashore Christmas by the sea.”

Having been used in the past to house the gift gallery, the ballroom was a blank slate ready for decorating. Ms. Pacheco continued the theme of home for the holidays in the large room, decorating with simple, Cape-themed objects, oyster shells, heart-shaped rocks, wampum, even cast-aside beach debris. “It’s all very natural,” said Ms. Pacheco. “It emphasizes doing what you can with where you are and what you have.”

In the ballroom Ms. Pacheco focused some of her color scheme to match the color of the walls and tile work, which are a blue green shade, almost the color of sea glass. In the middle of the room, a divider of tree and plants on a long wooden log breaks up the room and also helps guide the flow of traffic around the room.

In the nook next to the grand staircase the theme is music and caroling, with sheet music and vintage instruments on display next to Highfield’s grand piano. In the office area Ms. Pacheco has used old Christmas photographs of Highfield staff in a silver and white display emphasizing show.

The dining room features a Victorian theme with inspiration for decorating coming from the wallpaper. Ms. Pacheco has also scattered angels throughout the different areas for people to find. “There’s a symbolism in it,” said Ms. Pacheco. “You don’t always see them, but they are around.”

Ms. Pacheco has decorated 10 spaces in all.

Since this year’s guests are being guided along a particular path inside the building they can experience the narrative Ms. Pacheco has laid out, imagining the story of a family celebrating Christmas in their beloved Cape cottage.

There’s no right or wrong, said Ms. Pacheco, when it comes to decorating for the holidays. “Use what you have and place it any way that makes you happy and brings you joy. The first year we did the decorating we brought in all our own stuff. Last year I used some of the stuff we had downstairs and this year we used more of it. It’s what a normal family would do, put the Christmas stuff away and then go through it and use it the next year. It’s the same stuff but displayed in a different way.”

“We take solace in this building every day,” said Ms. Burke. “We hope everybody can come and enjoy it the way we do.”

Holidays at Highfield opens November 27 and continues Thursdays through Sundays from noon until 6 PM until Sunday, December 13. Entry times are between noon and 2 PM, 2 to 4 PM, and 4 to 6 PM. Admission is $10. Children and military personnel are free. Tickets must be purchased in advance through Highfield’s website.