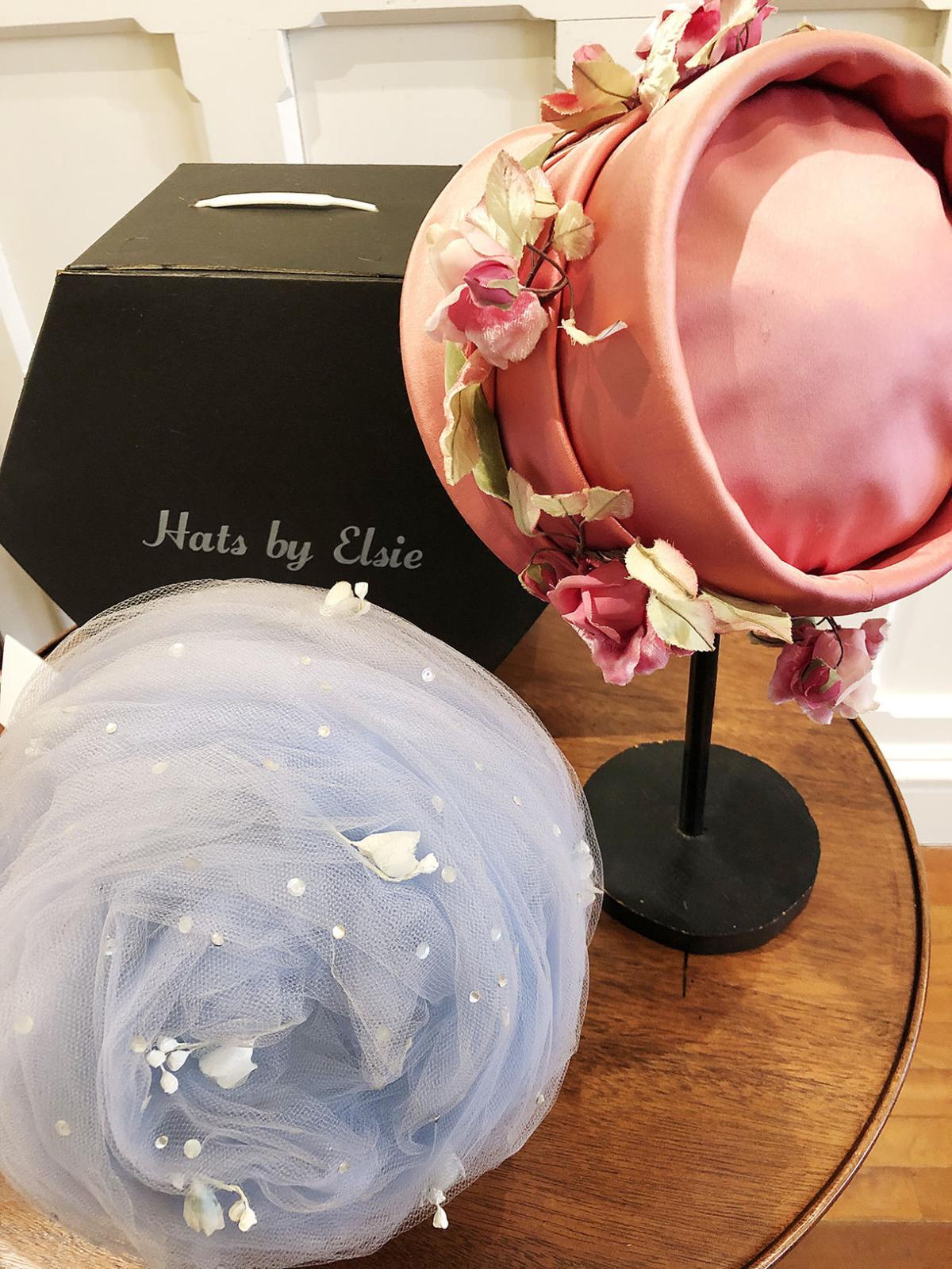 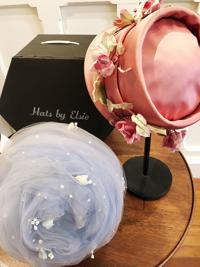 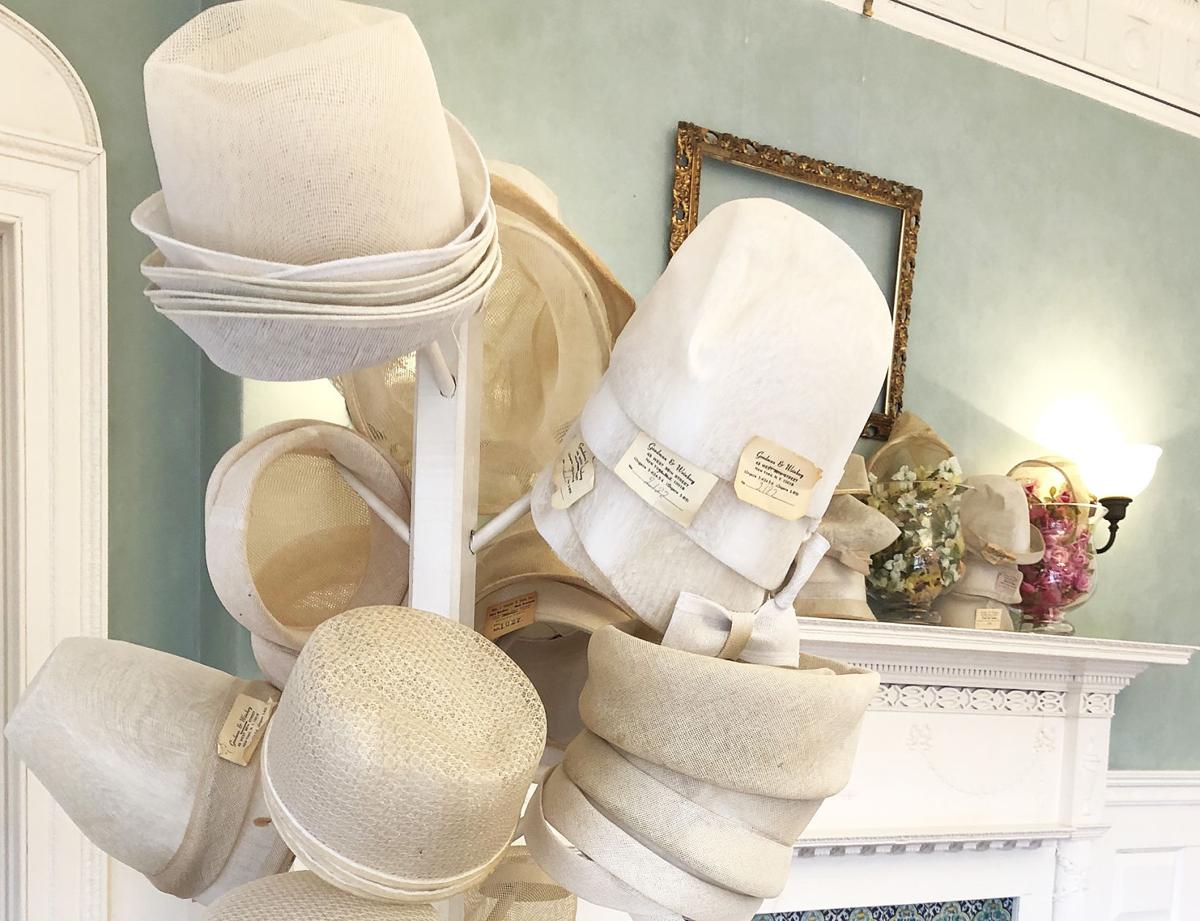 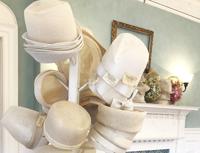 Highfield Hall’s latest exhibit, “Hats by Elsie,” is, if you don’t mind the pun, custom tailored for those who love vintage textiles and accessories.

The show features millinery materials from the collection of Elsie Rebello of New Bedford, a hat maker for over 50 years.

Now in her 90s, Ms. Rebello opened her hat salon in 1963. She sourced many vintage materials for her creations, which ranged from custom fashion hats to wedding, special event hats and veils.

Event stylist Rita Pacheco, who has decorated Highfield Hall for Holidays at Highfield for the past three years, curated the exhibit and designed the installation.

“Ms. Pacheco brought the idea up to us late last year,” said Joanne Ingersoll, director of programs and exhibitions at Highfield, noting that Ms. Pacheco’s friendship with Ms. Rebello and her family gave her access to Ms. Rebello’s extensive collection of not only custom-made hats, but the materials and tools involved in the trade.

Finished hats, forms, hat extenders, sewing supplies and patterns, laces, ribbons and straw, sales slips and tags, magazines, and a large assortment of vintage faux flowers are some of the items that make up the exhibit.

“This is just the tip of the iceberg,” said Ms. Ingersoll, adding that Ms. Rebello was meticulous, “she kept everything. She was also very prolific. She made a lot of hats.”

After taking classes in the late 1950s, Ms. Rebello set up and operated her business out of her home with her parlor serving as her upscale fashion salon. “The women who would come in were often looking to match a hat with a suit or dress,” said Ms. Ingersoll, noting that before the Second Vatican Council in the early 1960s, Catholic women were required to wear a hat, mantilla or other head covering to Mass.

One quote from Ms. Rebello explains that the hat styles of Jackie Kennedy boosted her business but she also states, “hats were in style before that because it was the hat that made the outfit.”

Ms. Rebello started her business at the peak of the pillbox hat era but as the 1960s went on, fashion became more about the hairdo, (think beehive or bouffant), and less about the hat, at which point Ms. Rebello segued into bridal and special occasion hats.

“She moved with the times,” said Ms. Ingersoll, adding that Ms. Rebello also sold millinery supplies to other hat makers, “so she was able to expand her business accordingly.”

Ms. Rebello also did shoe ornamentation when a pair of shoes needed to match a hat.

One notable aspect of Ms. Rebello’s business model was her buying habits.

“What I found so fun about her was that she did her buying trips in New York, buying from major hat millinery wholesalers who sold not only current products but also ones made decades before; so Ms. Rebello was also buying vintage and we’ve got a lot of that on view here from the straw and feathers to the ribbons. Everything that you see in the hall was specifically handmade for the millinery trade.”

There was an increase in the variety of materials available beginning in the first decade of the 20th century: machine lace, maline, velvets, tulle, silk and later nylon and lamé. Ms. Rebello bought “the best of the best,” according to Ms. Ingersoll, “she bought as much from Paris as she could.”

For the design of the show, in Highfield’s ballroom, Ms. Pacheco has reimagined how Ms. Rebello’s work space and shop may have looked and how she may have laid out and presented her materials. Vintage hat magazines are arranged on tables in the ballroom, as they would have been in Ms. Rebello’s shop, similar to hair fashion magazines being spread out at a hair salon. “They are from the end of the hat fashion era, but they are fun to look through,” said Ms. Ingersoll.

Ms. Pacheco has arranged the hall’s dining room as if a women’s luncheon and tea were taking place, followed by an afternoon of hat making.

To make a custom hat, Ms. Rebello might wrap the desired fabric around the base of the hat using bonding, glue or stitching to apply the materials and accessories. Flower-making was another related industry of the day, one that women could operate out of their homes. The large centerpiece in the museum’s foyer features an umbrella spine strewn with millinery flowers in an April-showers-brings-May-flowers motif.

Straw hats were also an option. Union Straw Works, the largest straw hat-making manufacturing factory in the world, was located in the town of Foxboro in the mid-to-late 1800s. Using straw in hat designs and bonnets remained popular long after.

A downside of the hat industry was the aggressive destruction of birds whose feathers were used on hats, a practice that thankfully fell out of favor in the early 1900s. The show includes examples of faux feathers, fabricated especially for millinery use.

Vintage hexagonal hat boxes, elegantly lettered with “Hats By Elsie,” are employed throughout the exhibit’s design.

With Mother’s Day, May Day and the Kentucky Derby all upcoming, Highfield’s “Hats by Elise” is both timely and timeless. The show will be on view through May 31.

For visitors who want to plunge their hands into the baskets of fabrics and ribbons, Highfield will be holding several workshops where participants can decorate their own hats or fascinators using some of Ms. Rebello’s excess supplies. Upcoming workshops include a flower crown-making workshop on Saturday, May 8, a hat-making workshop on Wednesday, May 19, and a floral creation night on May 20. Every Wednesday at 11 AM Ms. Ingersoll leads guided tours of the “Hats By Elsie” exhibit as well as of “Edges: Studio Art Quilt Associations Small Works.” The tours are free with museum admission, call or visit the website to register for events.

Gallery hours at Highfield Hall and Gardens are Wednesday through Friday, 10 AM to 4 PM, and Saturdays from 10 AM to 2 PM. Admission is payable at the door. Centers for Disease Control and Prevention and state protocols for health and safety must be observed.