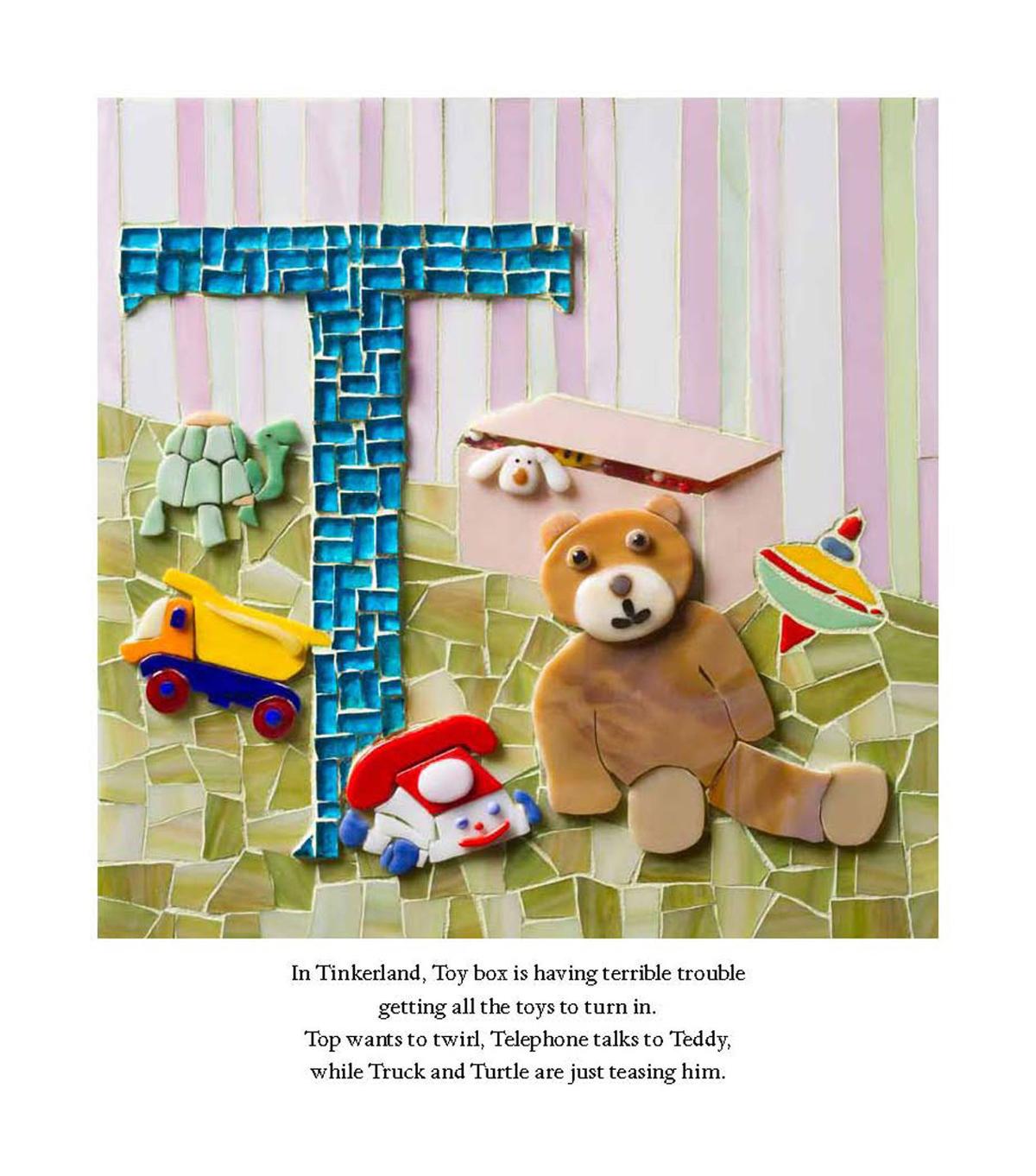 Currently “My Mosaic Alphabet Book” is available for purchase at www.capecodmosaicworkshops.com, through Amazon and at Artisan Salon on Main Street in Falmouth. 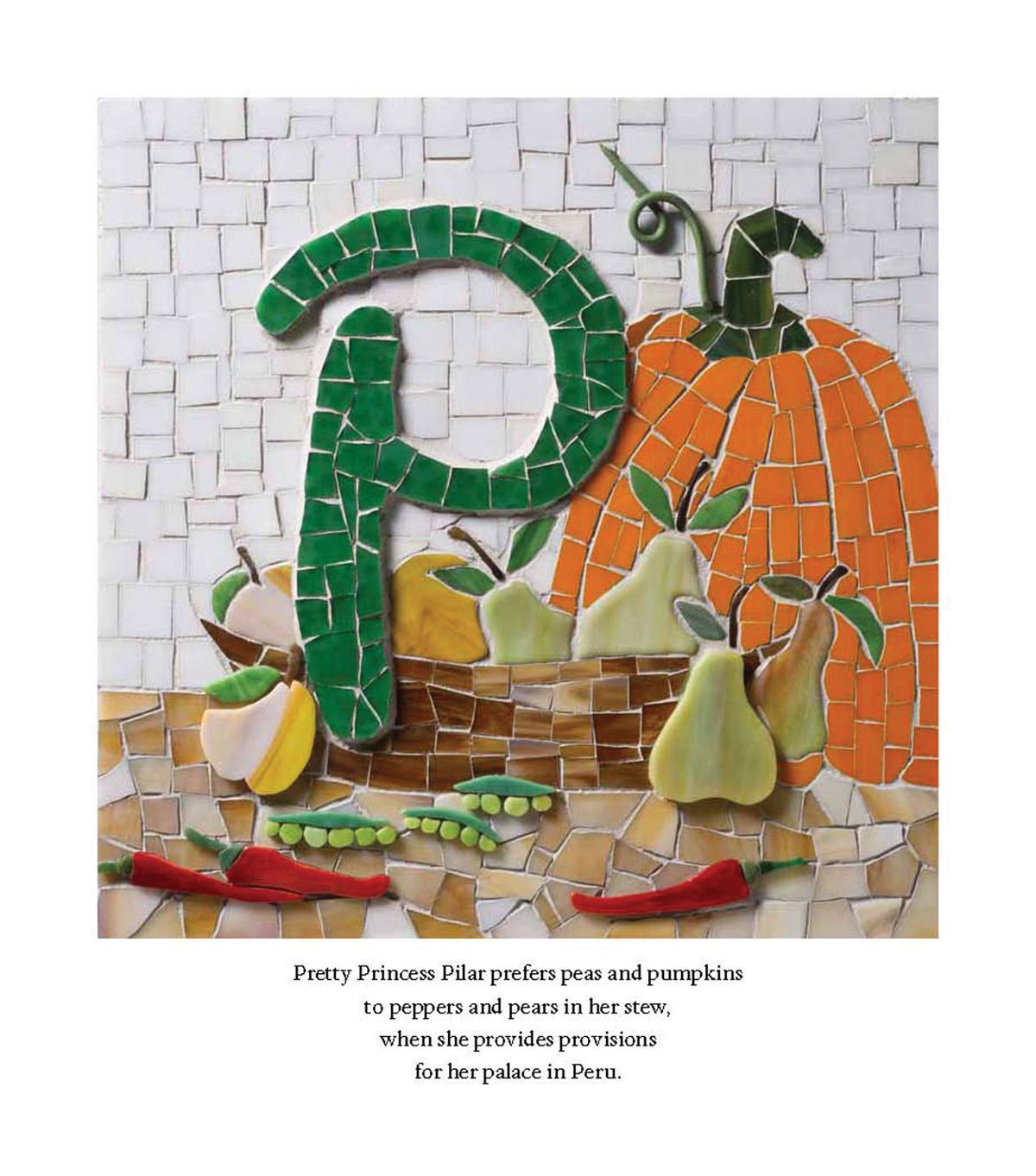 “My Mosaic Alphabet Book,” a collaboration between Jim and Debbie Bowen, combines colorful and intricate mosaic artwork with verses.

Currently “My Mosaic Alphabet Book” is available for purchase at www.capecodmosaicworkshops.com, through Amazon and at Artisan Salon on Main Street in Falmouth.

“My Mosaic Alphabet Book,” a collaboration between Jim and Debbie Bowen, combines colorful and intricate mosaic artwork with verses.

Did the ancient Greeks teach their children the alphabet via colorful artwork and clever rhymes? If they did, it’s likely they created those early abcderiums in mosaic, an art form that dates back as far as the golden age of Greece.

Regardless of whether his forefathers in art used mosaics for celebrating the alphabet, mosaic artist Jim Bowen of Bourne has recently completed the task: 26 14-x-14-inch mosaics, each illustrating a different letter, combined with verses by Mr. Bowen’s wife, Debbie, to create “My Mosaic Alphabet Book.”

In a career spanning two decades, Mr. Bowen has dabbled in all aspects of mosaics, from functional pieces to fine art, abstract art, and community projects. Also the founder of Cape Cod Mosaic Workshops, “my passion is teaching beginners,” Mr. Bowen said.

“I was looking for a long-term project to lose myself in,” said Mr. Bowen when the idea of an alphabet book surfaced, spurred by the arrival of the Bowens’ first grandchild, Pilar. “There comes a point in your life when your grandchild becomes your muse,” he said.

Mr. Bowen said that he began the process by taking a letter and researching and listing all the words he could think of that started with the letter. “I’d look at the list and think about how the words might related to each other, how they might make a story.” Mr. Bowen then sketched out his ideas as thumbnail drawings and chose the ones he thought worked the best.

Mr. Bowen said he initially started the project by going through the letters in alphabetical order, but then began jumping around and even redoing certain letters.

Some of his favorite mosaics included the letter J, which features a jester, jacks, a jump rope, and a tipped-over jar with individually cut and shaped fused-glass jellybeans spilling out of it.

The letter V features an elegant violinist performing in a carefully crafted vineyard with green fields of varying colors and terra cotta-roofed houses in the background. “I just love it,” said Mr. Bowen who explained that the drawing itself uses foreshortening that’s difficult to do on a mosaic surface, plus the bunches of grapes are all tiny individually chipped and fused bits of glass. “I got more detail-oriented at the end,” said Mr. Bowen.

Mr. Bowen also enjoyed the simplicity of the letter L’s image: a lighthouse bathed in sunlight with an ocean liner in the distance. “As simple as it is, it holds itself together well,” said Mr. Bowen.

“My Mosaic Alphabet Book” took four years and over 1,000 hours to complete, plus another year spent getting the book printed and preparing to market and promote it. Mr. Bowen called the process of self-publishing and marketing fascinating and likened it to a business start-up. He also enjoyed balancing the creative aspect of the book with the marketing aspect. “It used both the left and right sides of the brain,” he said.

Mr. Bowen said that from the start he envisioned a hard cover, glossy print, coffee table book. “They call these books grandparent books because grandparents often buy them for their grandchildren,” Mr. Bowen said.

It’s understandable that Mr. Bowen would be proud of the book. It’s a tour de force with incredible detail, fused glass as well as inlaid pieces, plus pieces built up on top of each other to create a three-dimensional, bas-relief look in certain areas of each piece. But Mr. Bowen is also proud of having been able to employ so much local talent in the book’s creation. It’s even printed in the USA.

The book was edited by Gene Bourque of West Falmouth, the pieces were photographed by Falmouth’s Tom Kleindinst. Saltwater Woodworks on Main Street in Falmouth created the frames for each piece. The book designer was from New York.

After each mosaic was completed, it was up to Debbie Bowen to create verses using the images her husband had so carefully created. Ms. Bowen said that, like her husband, she originally started the project by going in alphabetical order but “that turned out to be too forced.”

Many of the verses mention particular places: Peru, London, Malaysia, Africa, and, of course, Cape Cod. The verses are also well researched; for example Mrs. Bowen made sure that newts do indeed eat ants before mentioning that on the page for the letter N. The letter E accurately references a male eagle tending its nest—both the male and female eagle will incubate eggs.

“I wanted to explore the world and mention different places but more importantly I wanted each story to flow smoothly” said Mrs. Bowen.

Writing the verse for “My Mosaic Alphabet Book” inspired Mrs. Bowen to go even further with her writing and since the book’s completion she has written copy for two picturebooks for children. “I was inspired by my grandchildren, Pilar who is 6, and Alexander, 2, and the way they look at life and at different situations,” Mrs. Bowen said.

Mr. Bowen admitted to not having any future plans in the works yet. “I’d like to get back into oil painting,” he said.

A book signing for “My Mosaic Alphabet Book” will take place at the Cape Cod Children’s Museum in Mashpee on Wednesday, August 3, from 11 AM to 1 PM as part of the museum’s Cape Cod Land and Sea Week. The signing will include a mini-mosaic workshop for children using pieces of colored paper as tiles, as well as selections from the book read by the Bowens.

“My Mosaic Alphabet Book” is available for purchase online at www.capecodmosaicworkshops.com and through Amazon. Mr. and Ms. Bowen will be selling the book at book fairs and craft shows this fall. It is currently for sale at Artisan Salon on Main Street in Falmouth, where Mr. Bowen cuts and styles hair.

As for the 26 original mosaics that make up the book Mr. Bowen hopes to sell them as a set, hopefully to a person or institution with the space to display them. Perhaps the only chance the public will have to view the complete artwork will be this fall at Highfield Hall & Gardens, where they will be on display September 17 through October 31.