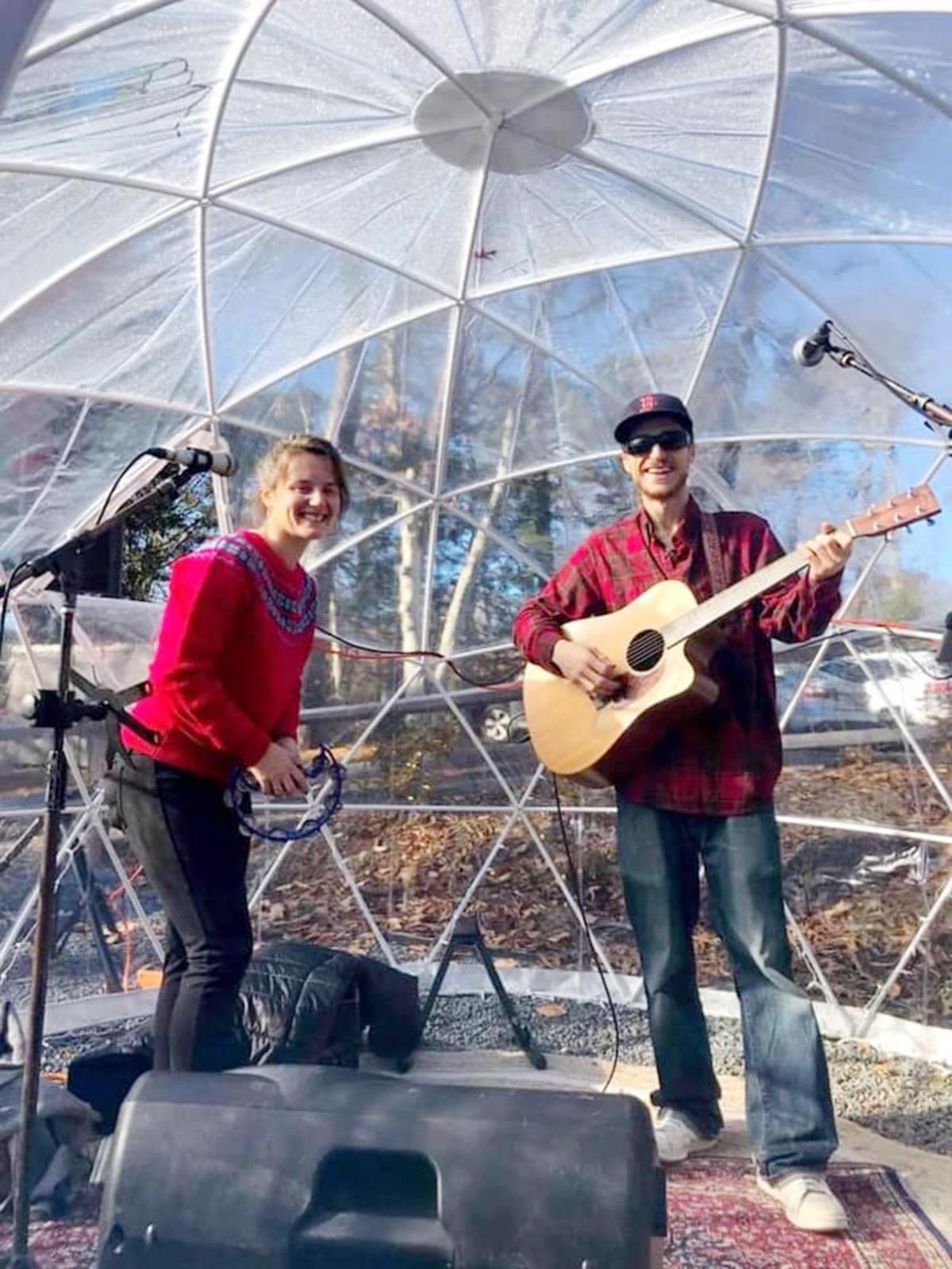 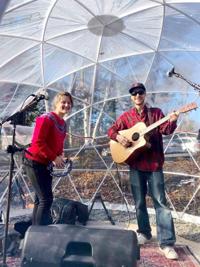 Mary Lindberg and John Redden of The Silent Trees, in a performance inside one of the igloo’s erected at Naukabout Brewery in Mashpee 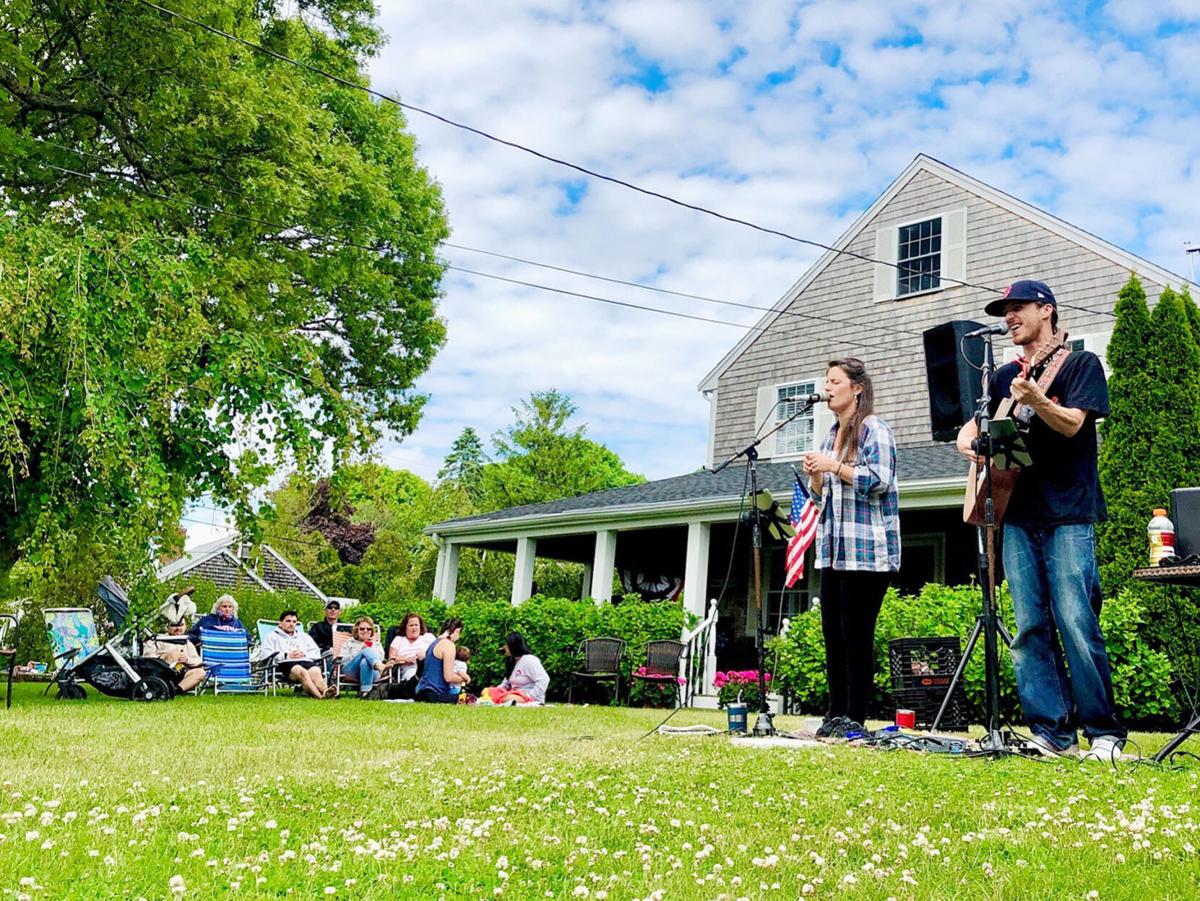 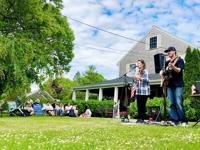 An impromptu front yard concert by The Silent Trees turned into a weekly event for the duo and their neighbors.

Mary Lindberg and John Redden of The Silent Trees, in a performance inside one of the igloo’s erected at Naukabout Brewery in Mashpee

An impromptu front yard concert by The Silent Trees turned into a weekly event for the duo and their neighbors.

The relationship between an audience and a musician is often symbiotic—both the performer and the listener receive something from the experience. “We love performing for an audience and need to do it as much as they enjoy hearing it,” said Mary Lindberg, who together with her partner John Redden comprise the acoustic duo The Silent Trees.

In terms of playing live music, 2020 was definitely a year for the record books.

“In March we knew something serious was happening, and we knew it would affect us because we play shows every weekend,” said Mr. Redden, adding that the pair, who have been together as a band for 10 years, are usually booked for gigs every Friday and Saturday and have a regular Thursday night gig in the summer playing at the West Falmouth Market.

“The next thing we knew everything was shut down, no entertainment,” Mr. Redden said, adding that it was particularly hard since “we happened to be way ahead of schedule and had almost the entire year booked.”

“It was definitely an adjustment,” Ms. Lindberg said. “We go pretty hard playing out all year-round.”

During the quiet spring, the duo committed to learning new material. “Songs fans have been suggesting for a long time,” Ms. Lindberg said, “but we didn’t have the time to sit down and learn between working our day jobs and going straight from there to gigs.”

Through Zoom, Mr. Redden continued to teach music to students, which he said has its pros and cons but generally works pretty well. “You would think that lessons need to be hands-on, but it’s almost better online because you have to verbalize everything. You can’t just point to something and say, ‘Do this,’ ” he said.

At the beginning of the shutdown, Mr. Redden and Ms. Lindberg teamed with other artists for several virtual performances, participating in “A Tribute To The Front Line, a livestream for frontline workers and first responders across the country, as well as in a virtual music festival organized by the Quell Foundation and dedicated to students who graduated in 2020.

The duo also performed livestreams from their home in North Falmouth, which they dubbed Tree House Studio Streams.

“We did some streams on our own, but we wanted something more,” Mr. Redden said. “Around Memorial Day, we decided to set up outside in our front yard and play a show for the neighborhood.” The show was well received, and neighbors and friends encouraged them to do it again. “It quickly became a weekly show,” Mr. Redden said, adding, “We felt a deep connection on so many levels with so many age groups in the community.”

People stayed socially distant in lawn chairs and blankets on their own lawns and on the periphery of Mr. Redden and Ms. Lindberg’s lawn. “Some people would drive from other parts of town and sit in the back of their cars in the driveway and listen,” Ms. Lindberg said. “For our little community, it was great. We played for free and put our tip jar out, and people were generous and appreciative of what we were doing.”

Some neighbors even wrote letters thanking Mr. Redden and Ms. Lindberg for providing music. “You may not think that you are making a difference in the world right now, but...you have made a huge difference in our lives,” wrote one neighbor who called the concerts “music therapy in its finest sense.”

“I felt like when it really started to take off we were a few months into the pandemic, and everyone was feeling the pressure and the depression from the shutdown. I think it brought people some much needed joy,” Mr. Redden said.

The Silent Trees play a mix of original songs and covers. “It kind of depends on what kind of crowd we have,” Mr. Redden said. “We’ve done more covers lately because it seems like that’s what the patrons want.”

The concerts became even more meaningful in the wake of George Floyd’s murder. “When the riots started, it felt a little like maybe we shouldn’t be doing it anymore, but I’m glad we keep it up. It seemed to bring everyone together.” Mr. Redden said that with a set list of more than 300 songs, he and Ms. Lindberg tried to choose songs that had meaning to what was going on. He remembered opening one of their shows at that time with Marvin Gaye’s “What’s Going On.” The couple also held a moment of silence during the shows to acknowledge what was going on and to remember people who had died from COVID-19 or from social injustice and to acknowledge, as Mr. Redden put it, “that people were struggling everywhere.”

“It was really special,” said Ms. Lindberg of the front yard concerts, adding that she did not know if the concerts would have happened if it wasn’t for the pandemic. “Last year if we had set up in our front yard, I wonder if as many people would have come by or been interested.”

Mr. Redden said they were also able to stream some of their summer shows for fans who were not comfortable leaving their homes.

Slowly things began to pick up, and the duo performed outdoors at a variety of venues during the summer and fall, namely the Cape Cod Winery, Cape Cod Coffee, The Bog Pub, Off The Grid, The Pilot House and Naukabout Brewery.

The Woodshed in Brewster was the first place they performed after the initial shutdown. “They were really good to open their doors and try it,” Mr. Redden said. “They had to jump through hoops to bring in live music.”

The couple had nothing but complimentary things to say about the venues that hired them to play live music during the year.

Naukabout Brewery in Mashpee invested in geometric, igloo-like domes to erect outside for patrons to use during the winter. “One of the first days they had them set up, they wanted us to play inside one of them,” Mr. Redden said. “We put our speakers outside the igloo, and we played inside the igloo while other people were in their different igloos. They just went above and beyond to try and accommodate patrons and entertainers. We appreciate all the places that hired live music during this time and supported the artists who play out.”

The duo was also able to perform at the Falmouth Drive-In.

“As dark and as weird as it got and still is, I feel like there may be a shift, a renaissance of people who have been at home creating things that wouldn’t have happened under normal circumstances,” Mr. Redden said.

With the latest restrictions preventing live music at restaurants, The Silent Trees have had to reinvent themselves again. “For Christmas we recorded personalized greetings and jingles that people could purchase for someone,” said Mr. Redden, adding that the pair also offered private Zoom concerts where fans could request the entire set list. “It just seemed a little more interactive,” he said.

Another innovation the pair have been considering is performing private livestreamed concerts for specific venues. “We could go livestream in a bar that’s equipped with TV and a sound system,” Mr. Redden said, “and it would be like we’re playing there even though we wouldn’t be in the building.”

While technology sometimes gets viewed in a negative light, the ability to livestream or perform over Zoom was a lifesaver this year. “Thank goodness for technology,” Ms. Lindberg said. “Being able to bring our music to people in the safety and comfort of their own homes has been such a blessing.”

Along with livestreams came the challenge of learning new technology. “We’re still figuring it out, and I feel like it could always be better. It’s part of the puzzle that wasn’t really assigned when we first got into this,” Mr. Redden said. “You have to be everything for your band: promotions, accountant, janitor, manager. It’s now more manageable as a do-it-yourself than it’s ever been. Which is good and bad.”

Updates on the band’s schedule, livestreams and other events can be found on the group’s Facebook page.

“When the music lives inside you the way it does in almost any professional musician who wants to play out, you’re going to have to find a way to make others hear it,” Ms. Lindberg said.

“It’s been a roller coaster,” Mr. Redden added, “but one silver lining was witnessing firsthand the power of music and how it can resonate light in the darkest times.”