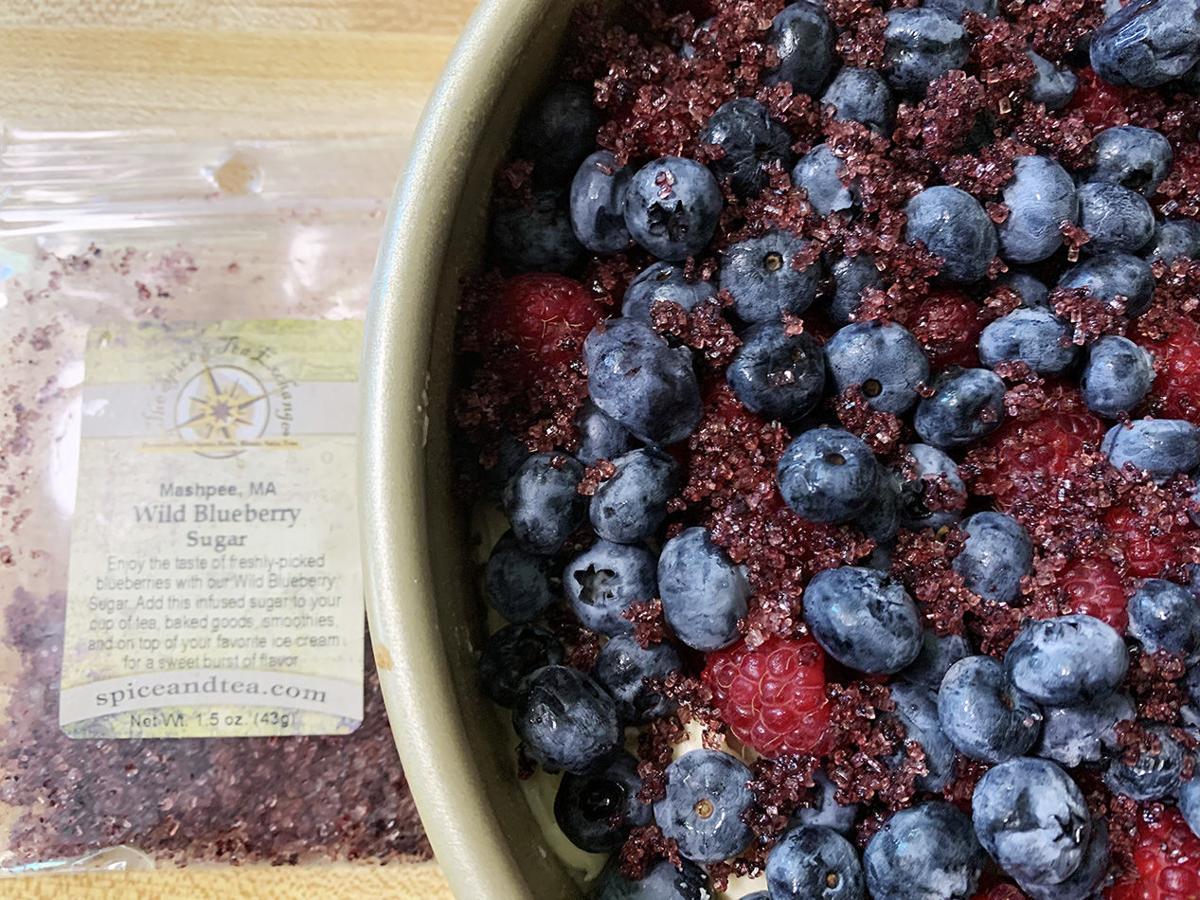 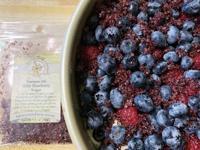 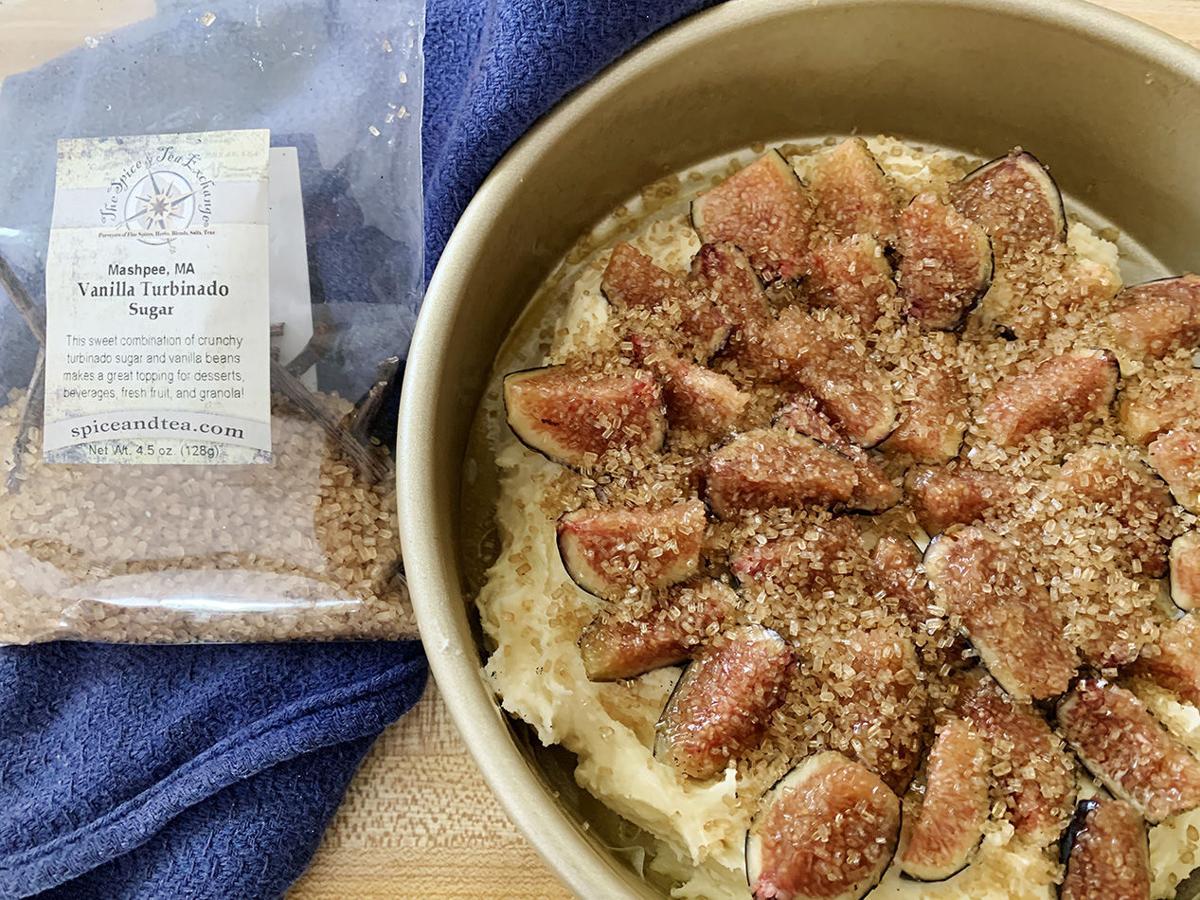 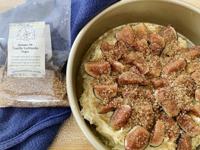 It’s always been one of my favorite “back pocket” cakes to make. Simple, seasonal, not too many ingredients: a stick of butter creamed with three-quarters cup of sugar, a teaspoon of vanilla, then two eggs. Beat well, sprinkle in a cup of flour, a teaspoon of baking powder and half a teaspoon of salt. Spread in the pan, top with fruit, sprinkle with a little “bling” in the form of demerara sugar, bake—and you are done.

This is, of course, the iconic plum torte that was originally published in the “Elegant But Easy” cookbook, written by Marian Burros. She credits Lois Levine, a childhood friend, for the recipe that they published in their joint cookbook in 1960. The recipe was then called “Fruit Torte.” Burros recommended making it at this time of year, when prune plums are just in the markets for a few weeks.

She published it in the New York Times in 1983, and it quickly became a reader favorite. Actually a classic—for many of us, the harbinger of fall baking. Readers of the Times went crazy for it, continually asking for it to be reprinted. Responding to their passionate pleas, the Times obliged, and every fall (for 12 years or so) they shared it.

Then they grew tired of it and encouraged readers to print and/or laminate it, thinking they might not publish it the next year. Folks involved in the effort attribute its popularity to its ease, deliciousness and adaptability—perfect for a home cook.

In an article she wrote in 2016, Margaux Laskey noted that a Google search for “New York Plum Torte” yielded nearly 80,000 results. Try Googling it today, and you will get more than half a million results! Indeed, who would have thought a simple cake could elicit so much interest?

In 2010, Amanda Hesser, former food editor of the New York Times Magazine, published “The Essential New York Times Cookbook.” She took on the daunting task of testing/compiling the paper’s most requested recipes, and, not surprisingly, suggestions for this recipe popped up almost 250 times from readers. She herself tested and confirmed the cake was pretty much a “perfect recipe.”

“This plum torte is the most requested recipe in the Times archives,” Ms. Hesser wrote. She attributes the recipe’s popularity to its simplicity: “The ingredients are familiar, the instructions call for just a handful of steps and no special equipment is needed. Not only is the dessert not overly fussy, it’s not overly sweet, and it’s not at all intimidating to make.”

With such a few ingredients, this didn’t seem to have the makings of a hit. Ms. Laskey states, “Yet after the fact, the newspaper received so many requests for the recipe that the editors decided to reprint it the following year, and the next, and each subsequent year until they decided it was time to put an end to the madness.”

In 1989, they ran an updated version (three-quarters of a cup of sugar, rather than a full cup) with a broken-line border, encouraging readers to cut it out, laminate it and save it. Ms. Burros wrote, “This could really be the last time we print the recipe. Really!”

Ms. Laskey says that numerous protests followed. “The appearance of the recipe, like the torte itself, is bittersweet,” a reader wrote. “Summer is leaving, fall is coming. That’s what your annual recipe is all about. Don’t be grumpy about it.” Another reader wrote, “Perhaps this has become the adult version of September’s shiny new notebook for school,” and a few readers sent in poems.

The recipe has been adapted by many. Some add cornmeal, others peaches. Some sprinkle on berries (as I did) or use what they have (figs) when they cannot find prune plums in the market (as I did). Anyway you make it, it turns out just fine. It’s a buttery, crispy-edged cake with sweet and gooey fruit baked inside, and a crunchy topping (if you use a coarse sugar as I did).

It’s adaptable to size: use an 8-or-9-inch baking pan, a springform pan, if you want. I have even made it in a tart pan. Here’s the original recipe, followed by a few more that have become popular over the years. I believe that Ina Garten’s cranberry torte is based on this cake, so grab a few bags for the freezer when you see them.

Preheat oven to 350 degrees Fahrenheit; grease a springform pan (8, 9 or 10 inches) and set aside. Cream the sugar and butter in a bowl; add the flour, baking powder, salt and eggs, and beat well. Spoon the batter into the prepared pan a springform pan of 8, 9 or 10 inches. Place the plum halves skin side up on top of the batter. Sprinkle lightly with sugar and lemon juice, depending on the sweetness of the fruit. Sprinkle with about 1 teaspoon of cinnamon, depending on how much you like cinnamon. Bake for about 1 hour. Remove and cool; refrigerate or freeze if desired. Or cool to lukewarm and serve plain or with whipped cream. (To serve a torte that was frozen, defrost and reheat it briefly at 300 degrees.)

A squeeze of lemon juice

Preheat oven to 350 degrees Fahrenheit; prepare a 10-inch pan by buttering and lining with parchment paper. Whisk together flour, cornmeal, salt and baking powder. Beat butter; add ½ cup plus 2 tbsp sugar, and continue beating while adding the grapeseed oil. Add the eggs, one at a time, beating after each addition. Add the dry ingredients and then the vanilla, beating only until combined. Pour into prepared pan; halve the plums and remove the pits. Top the batter with the plum halves, forming concentric circles. Top with a squeeze of lemon juice. Combine remaining tablespoon of sugar and cinnamon, and sprinkle evenly over the top. Bake for 45 to 50 minutes; cool completely, then run a knife around edge. Flip onto a plate and then flip again (onto another plate) so that the plum side is facing up.

Heat oven to 350 degrees Fahrenheit; sift flour, baking powder and salt; set aside. Add butter and sugar to the bowl of a large stand mixer (or use a hand mixer), and mix on medium speed until light yellow in color (a few minutes should do the trick). Add the sifted ingredients to the bowl, mix gently and add eggs and mix until just combined. Transfer batter to an ungreased 9-inch springform pan, and spread evenly. Cover batter with peach slices (arrange however you wish). Sprinkle with the remaining tablespoon of sugar, lemon juice and cinnamon. Bake until a cake tester comes out clean in the center and the cake is golden for 45 to 50 minutes. Remove from oven and cool, then unmold from pan. Serve with whipped cream, creme fraiche or more sliced peaches.

Preheat the oven to 400 degrees Fahrenheit, and grease a 9-by-13-inch baking pan. Place the plum slices in a bowl, and gently toss with 2 tbsp whole-wheat flour. In a separate bowl, combine the remaining whole-wheat flour with the baking powder and kosher salt. In the bowl of an electric mixer, beat together ½ cup butter, sugar, Cognac or brandy and vanilla until light and fluffy. Add the egg, and beat until thoroughly combined. Add half the flour mixture, and beat until just combined. Pour in the milk, and continue beating, scraping down the bowl as necessary. Add the remaining flour mixture, and beat until just combined. Scrape the dough into the pan, smoothing the top with a spatula. Scatter on the plums in an even layer. Sprinkle the demerara sugar on top. Bake for 35 to 40 minutes until the top is golden brown. Transfer to a wire rack to cool completely before serving, with whipped cream if you like.

Improvements Are Ongoing At Highfield Theatre