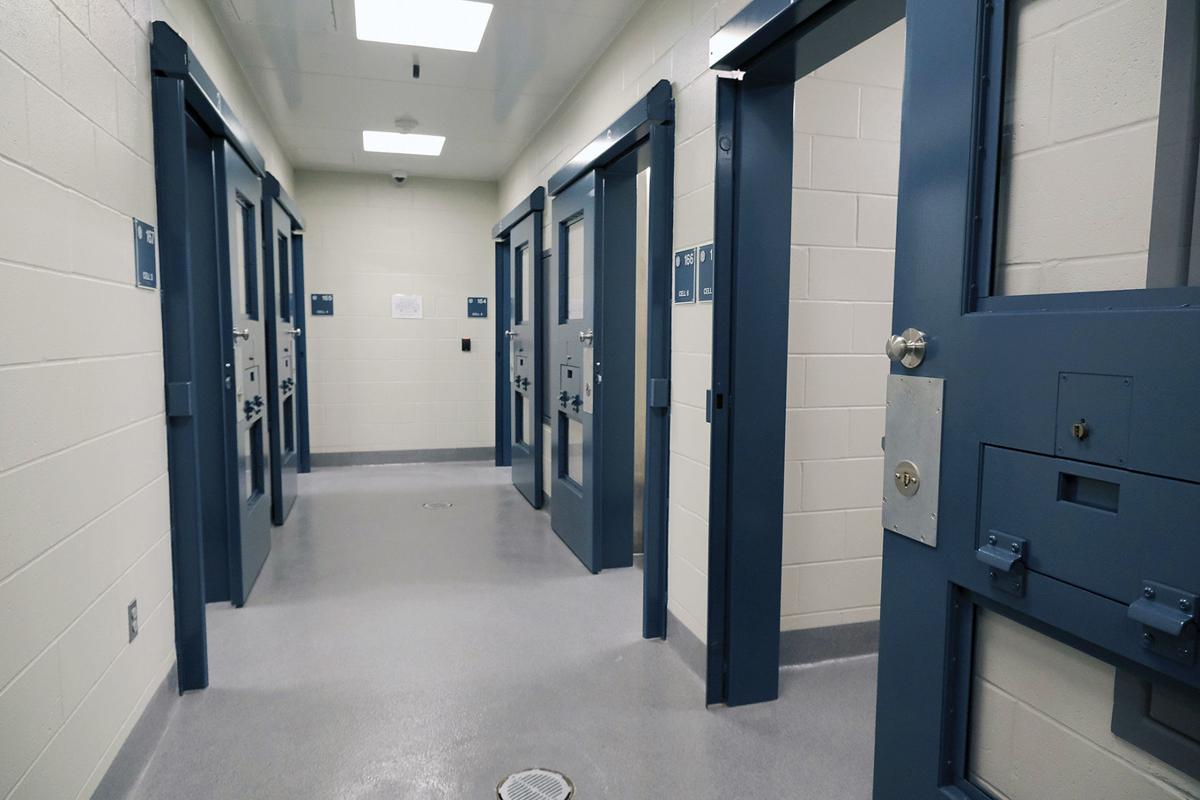 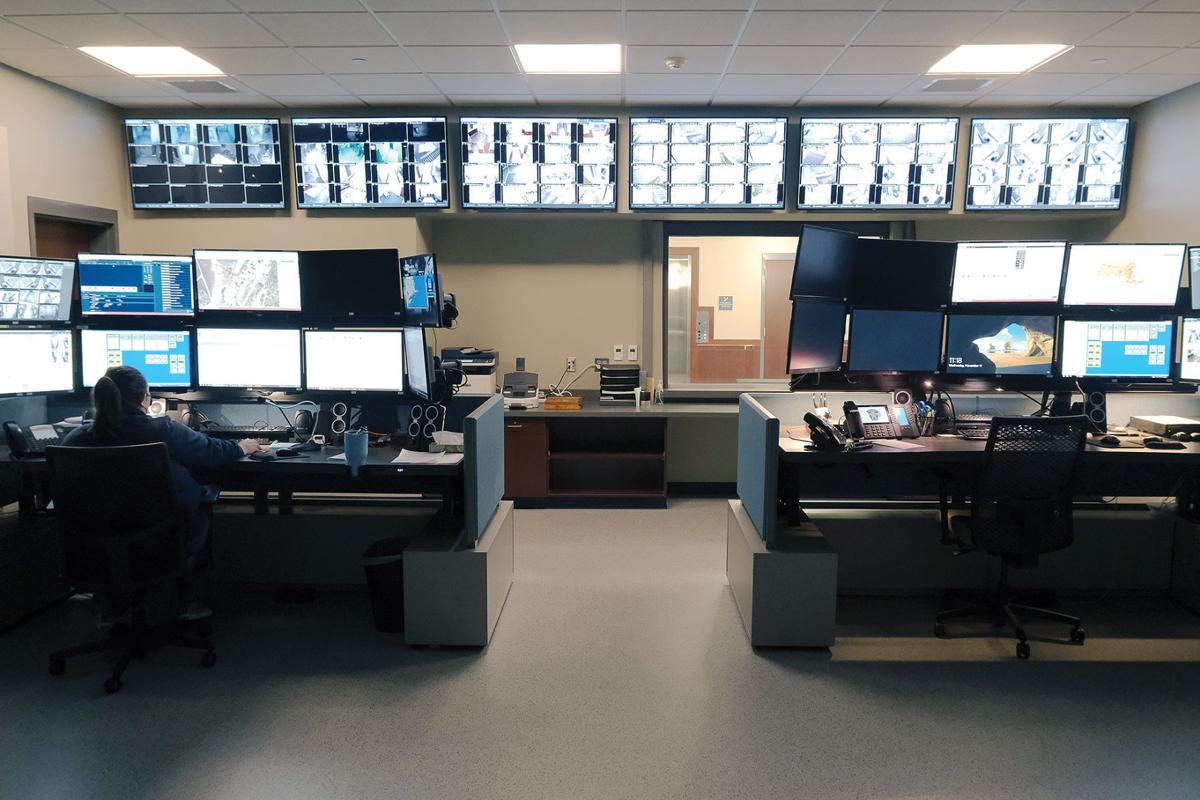 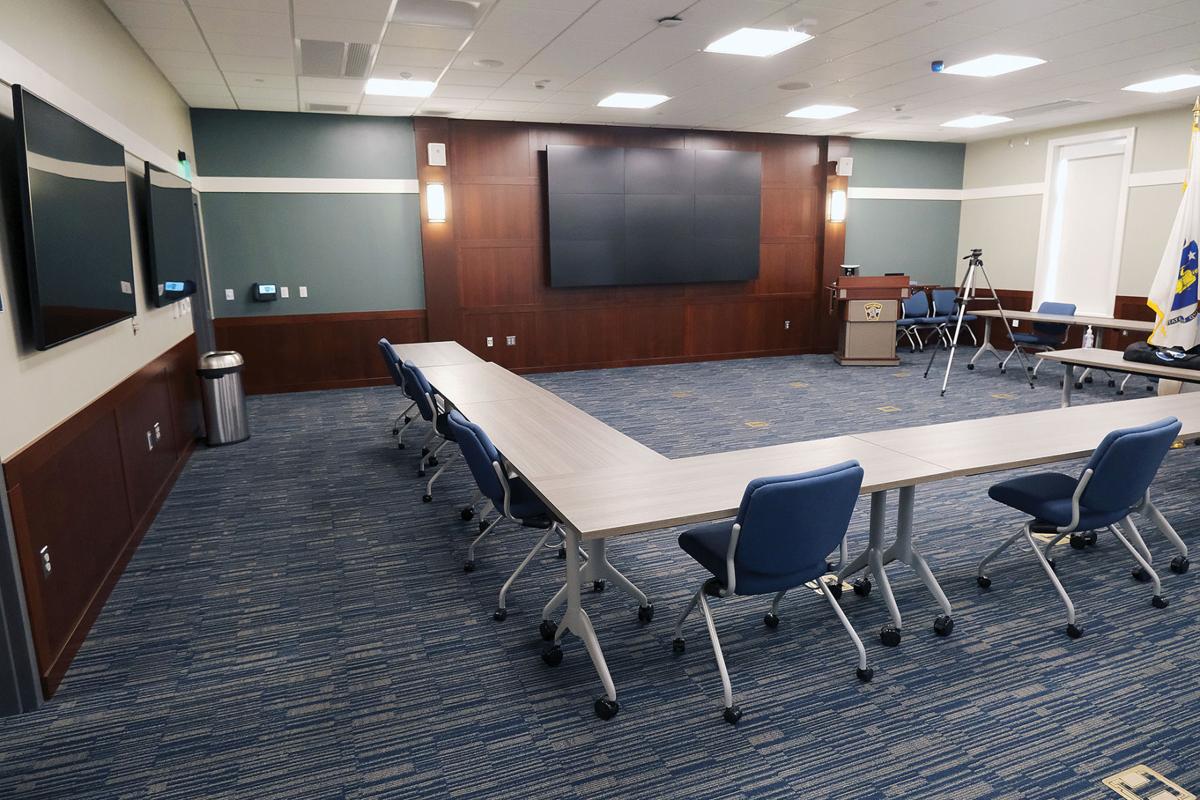 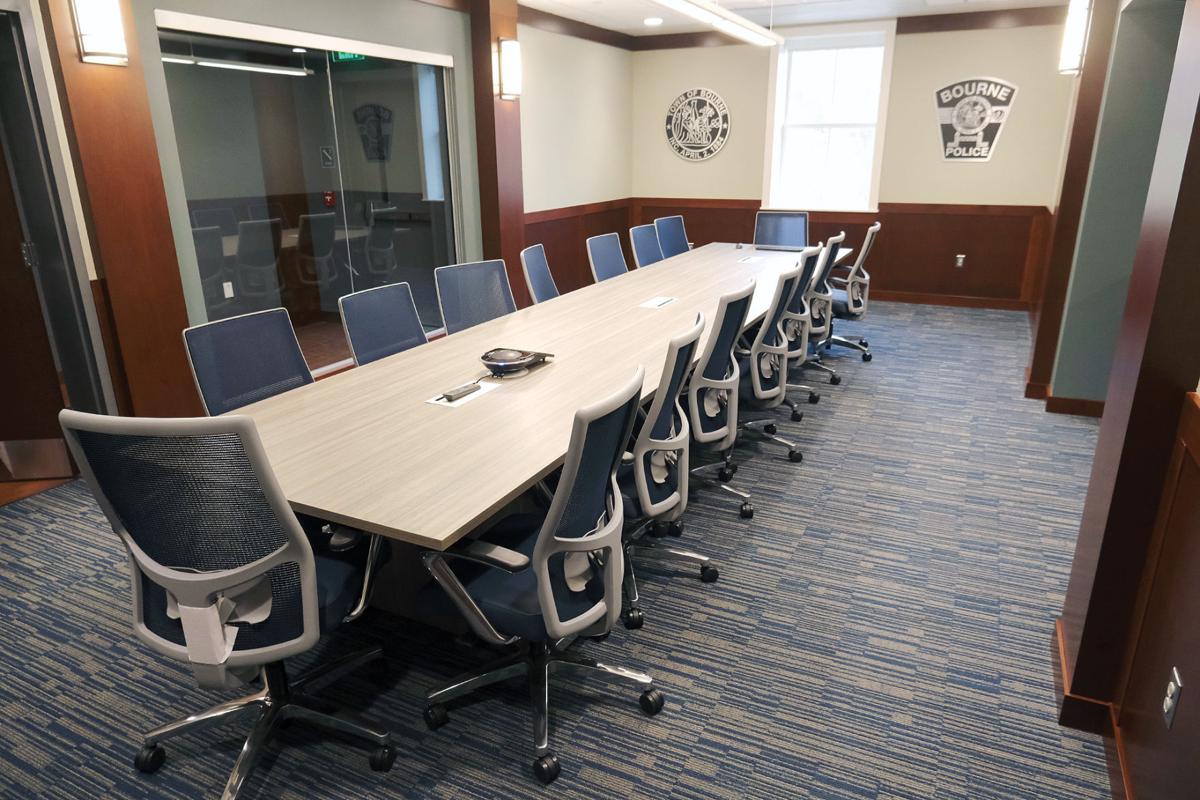 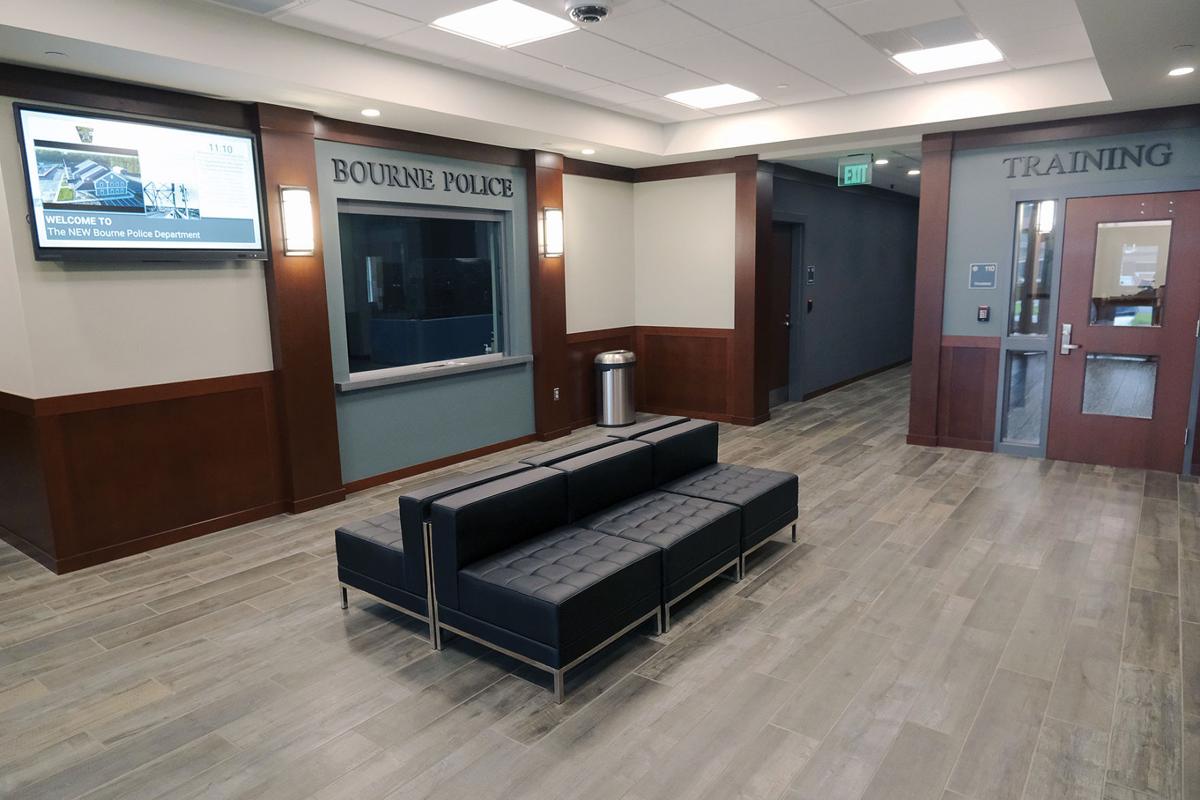 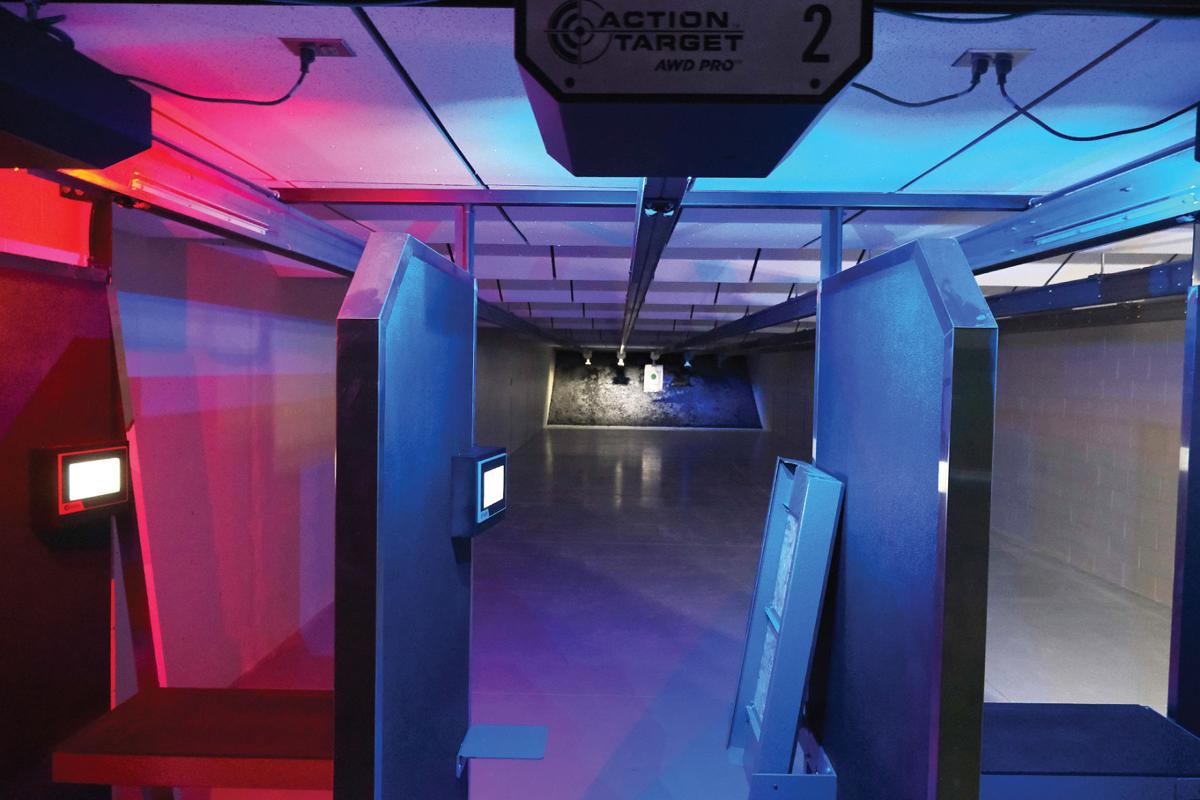 Lights can be activated in the firing range that simulate the flashing lights from cruisers.

Lights can be activated in the firing range that simulate the flashing lights from cruisers.

It took more than a decade, but the Bourne Police Department finally has a new home, and the contrasts between the new police station on Armory Road in Buzzards Bay and the department’s former home on Main Street could not be starker.

The old building was a cement-and-concrete box nearly nine decades old. The new station—with its clapboard-sided, Cape Cod design—is far more modern in its look and infinitely more inviting to the public.

The old building covered a little more than 8,000 square feet and was bursting at the seams with its personnel, vehicles and equipment. A 2009 report by the Cecil Group called the Main Street station the worst public building in town. Still, it took until the October 2016 Special Town Meeting before Bourne residents voted to approve funding the $17.6 million project.

The new building has three floors aboveground and one underground. Its total measurement comes to 29,379 square feet, with a footprint of 13,296 square feet, and a height of 51 feet, 6 inches. The building’s lifetime has been placed at 50 years.

On a recent tour of the new police headquarters, Chief Woodside opined that there is no telling the types of challenges that law enforcement personnel will face in the future. With the new building, he said, the department and its officers “are set up to succeed.”

Visitors enter into a spacious main lobby where they are greeted by dispatchers who sit behind a thick, protective wall of bulletproof glass. Just off the lobby is a firearms licensing room as well as an interview room where people can come in, meet with department staff and discuss a problem they might be having.

Past the lobby is a large conference room where much of the department’s training takes place. The room is outfitted with numerous video monitors, and experts have already been brought in to conduct training sessions in such scenarios as deescalating a tense situation. Chief Woodside said he could not emphasize too strongly the need for training by the men and women of the department.

“Any training opportunity that has a direct benefit to our officers, we embrace it 100 percent,” he said.

The new station’s training room is a departure from the old station, the chief said. There was no training room at the Main Street building, so officers had to be sent elsewhere. Having a training room, he said, saves the town both time and money.

Another benefit of the training room is it can function as an operations center in the event of an emergency such as a hurricane, he said.

A roll call room provides a place for officers to gather first thing in the morning, go over police logs, get advice on what to look out for while on patrol and learn about new policies or procedures, the chief said. An evidence room contains equipment for processing evidence as well as lockers for storage.

On the other side of the lockers is an evidence officer who logs the information into a computer, then places it back into storage. Evidence compiled in connection with drug cases is filed in even more secure storage compartments. Chief Woodside said he consulted with the Cape and Islands District Attorney’s office as well as the Massachusetts State Police on what files needed to be retained and what could be discarded before moving to the new station.

Booking rooms are entered into directly from the station garage. The rooms contain cameras for mug shots, computers in which booking information is logged, phones for suspects to use, lockers for prisoner property, fingerprint machines and breathalyzer testers.

Cells are divided into male, female and juvenile. Concrete bunks are built into the wall, and prisoners are given a blanket to lie on while they are being held. A room where the bail commissioner can conduct business is in the same area of the building as the cells. All business is audio- and video-recorded, the chief said. Upon release, prisoners leave through a nearby door with direct access to outside, with no need to go back inside the building, he said.

The former police station, at 175 Main Street in Buzzards Bay, was home to the Bourne Police Department for 87 years. Built in 1933, according to Bourne Town Assessor records, the station was originally a one-story structure. A second floor was added in the 1970s.

In 2013, the brick façade where the second floor was added began to pull away from the outside of the building. Holes had to be drilled and bolts inserted to secure the brick façade and prevent the siding from collapsing.

The list of problems with the old station was long and substantial. Water damage, black mold and asbestos permeated the building. Chipped and cracked floor tiles in the men’s locker room sent asbestos dust into the air that officers breathed in on a daily basis. Throw rugs were placed in front of lockers to keep the asbestos dust down.

Other than the ramp in front of the building, no other part of the building complied with federal Americans with Disabilities Act regulations. That included any kind of accessible entrance for a handicapped prisoner other than into the front lobby, or an elevator to the second floor.

At the old station, one locker room was set aside for the department’s female staff. However, the same room also housed a refrigerator where all department employees kept meals as well as a microwave for heating up that same food.

The garage was too small to hold the department’s cruisers, so it became a storage space. With no room for cruisers, prisoners exited into an open area instead of an enclosed garage. That made arrests difficult for patrolmen should a prisoner attempt an escape.

The new station now features a sally port and garage where cruisers can pull in and doors close, and where suspects are brought immediately into a booking room. The chief said he believes the new garage, compared to the undersized garage at the old station, can accommodate up to five or six of the department’s fleet.

Administrative offices, including those for the sergeants, lieutenants, court officer and the chief himself, are located on the building’s upper floors. A short elevator ride down belowground is where the department’s new firing range is located.

Five lanes wide, the range offers a variety of programs to test the shooter’s ability to react given different circumstances. Targets can move away, come back and/or pivot, the chief said. A program can be set up in which the target is in position for 3 seconds and then moves to a different location. Flashing lights, designed to emulate a cruiser’s lights being on, can also be incorporated into the shooting session.

An adjacent training room contains a computer simulator. It features computer programs that put the officer in different arrest scenarios. Weapons and equipment the officer can use during the simulation include rifles, guns and pepper spray. The aim of the simulator, along with the actual firing range, is to provide the training the chief feels is crucial for solid police work.

“You have to train, train, train,” he said, “because when you’re under stress, you can’t process decisions. It takes longer, so you kind of have to react. It’s a lot of training.”

The new station was budgeted for $17.6 million, but Chief Woodside said it will come in under budget. He hesitated to give a precise figure, but he estimated that a couple hundred thousand dollars will be left over. He has already received compliments from architects in other police departments expressing their enthusiasm for the new station.

“It increases our professionalism amongst the men and women who work here, which is certainly always desirable,” he said.

As for the fate of the old Main Street building, no firm decision has been reached by town officials. In February, the Bourne Board of Selectmen broached the prospect of combining the building lot and the parking lot across Harrison Avenue.

Harrison Avenue, which loops around the old station and Canal Cruisers Bicycles, would then be turned into a dead end at the back of the property line. Board members concurred that being able to offer both lots, with no street in the middle, would be more desirable to any potential developer.

Any decision to turn Harrison Avenue into a dead-end street would have to be approved by residents at a future Town Meeting.