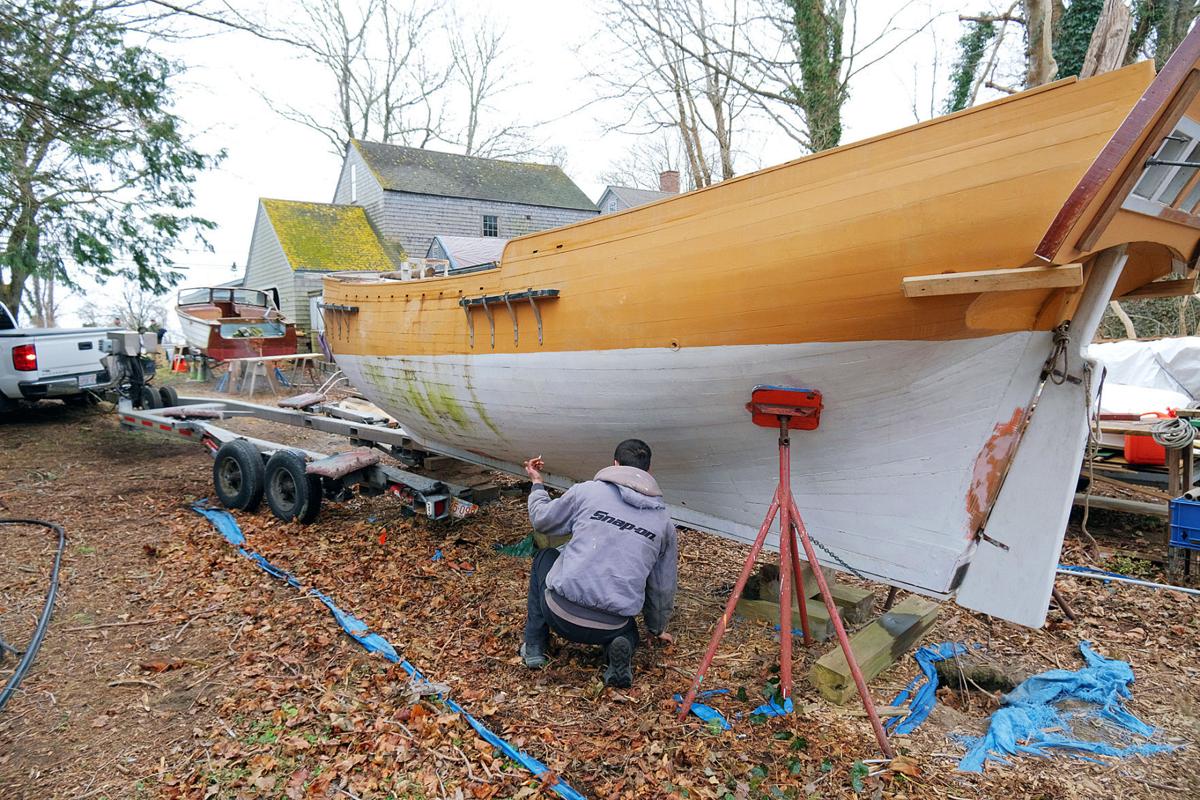 The replica of the Sultana is prepared for its move from Woods Hole to the Aptucxet Trading Post in Bourne. The original ship, built in 1767, was about 55 feet long. It was a Marblehead Schooner, a type of ship named for the town where the style was designed. 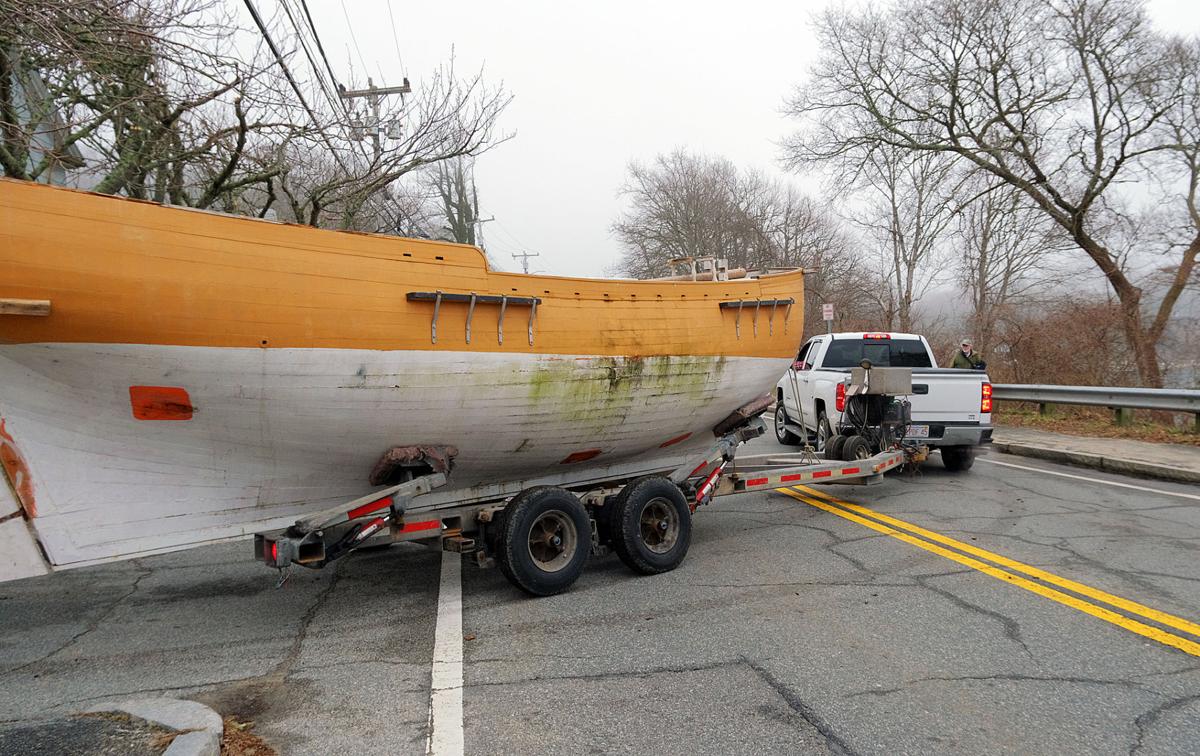 The Sultana, a half-scale model of a Revolutionary War-era vessel, is on its way from a spot behind the Woods Hole Historical Collection to the Aptucxet Trading Post in Monument Beach. The vessel was moved on Tuesday. The original ship, a Marblehead Schooner, was built in 1967 in Boston. It was about 55 feet long.

A 20-year boat-building project has found its way to Bourne. Construction of a half-scale replica of a Revolutionary War-era schooner has been moved from the boat shop at the Woods Hole Historic Museum to the grounds of the Aptucxet Trading Post.

The 27-foot-long, 9-foot-wide replica of the schooner Sultana was hoisted onto a trailer and trucked from Woods Hole to Bourne by Peck’s Boats of Marstons Mills on Tuesday, February 25. It will be on permanent display at the trading post and situated alongside another historic boat—the Speedwell—occupying the trading post grounds.

Bourne Historical Society chairman Galon L. (Skip) Barlow Jr. is the author of the book, “The Battle of Nantucket.” The book explores a battle involving the two ships. Mr. Barlow said the juxtaposition of the two at the trading post is fitting, given their shared history.

The original Sultana was built in 1767 in Boston. At 55 feet long, it was built in the style called Marblehead, and named for the North Shore town where the design was developed. Upon completion it was delivered to Sir Thomas Asquith of Southampton, who had ordered its construction.

It was requisitioned for the British Royal Navy, and returned to the colonies to enforce tea taxes and blockades in the years prior to the Revolutionary War. Mr. Barlow explained that the Sultana patrolled all around Cape Cod, including Nantucket Sound and Buzzards Bay.

The Speedwell, he said, was built in Pocasset and sailed by Mr. Barlow’s ancestors, who were engaged in coastal trading. The ship ran afoul of the British when it rounded up colonists on Nantucket who were sympathetic to the crown, and provided supplies of fresh meat and water, he said.

The crew of the Speedwell brought the supporters back to the mainland to be tried as traitors, Mr. Barlow said. That made his ancestors outlaws in the eyes of the British Navy, he said.

“The British tagged those guys on that boat [Speedwell] as pirates,” he said, “so you had good guys and bad guys.”

The Speedwell and the Sultana faced off in what came to be known as The Battle of Nantucket in 1782.

“So, we’re going to have those two boats side by side,” Mr. Barlow said.

The scale model of the Sultana has been at the Historic Museum since 2014. Its size has required the museum to lease a small piece of neighboring property that is owned by the Woods Hole Oceanographic Institution.

While the lease with WHOI has been renewed for another two years, people connected with the museum believe that the move to Aptucxet would be more advantageous for the project. There are a number of other boat-building projects currently underway that are making working space tight.

Construction of the Sultana replica was started on Martha’s Vineyard in 2000 by Fred Littleton of Chilmark. Mr. Littleton was a Philadelphia attorney who moved to the Vineyard upon retirement and served as harbormaster from 1985 to 1995.

He began the project at age 75 and was still working on it when he died 10 years later. After his death the boat was supposed to go to another Cape Cod museum, but those plans fell through and it wound up sitting in the yard of a Centerville homeowner.

Laura M. Reckford of Lakeview Avenue, Falmouth, in an article about the project in the publication "Cape Cod Wave," wrote that after Mr. Littleton died, the scale model was moved from the Vineyard to the home of Mark Wilkins of Centerville, the former curator for the Cape Cod Maritime Museum in Hyannis.

Mr. Wilkins intended to install it at the Maritime Museum. Before that could happen, Ms. Reckford wrote, Mr. Wilkins left the museum and moved off-Cape. He left the boat behind in the yard of his home, along with a letter of intent to donate the boat to a museum, she said.

The new homeowners, Virginia and Bernard Sweeney, wanted the scale-model boat removed from their property. In 2014, the couple placed ads on Craigslist and in local newspapers, hoping someone would show interest.

The Woods Hole Historical Museum’s woodworking and boat-building crew saw the Craigslist ad and jumped at the chance to get the boat.

One member of the work crew is Robert Leary of East Falmouth. Mr. Leary is a retired public school industrial arts teacher who has been working on the Sultana replica since 2014.

He said the crew learned that the Sweeneys’ plans were to cut up the boat if no one took it off their hands. Destroying the boat, Mr. Leary said, was the last thing the boat-builders wanted to see happen to it.

“We thought, you know, this is a bit of Cape Cod history,” he said.

The boat, Mr. Leary said, is a two-masted schooner. Spruce trees were cut down in the Falmouth town forest and will be used to create the masts for the finished boat, he said. Mr. Littleton’s original intent, he said, was to build a working boat that he could sail.

That goal has changed, Mr. Leary said. The intent is no longer to charter it, or put it to practical use. Instead, it will be a static display at Aptucxet Trading Post.

“I forget how many pounds of lead we pulled out of the bilge because he had all this ballast in it,” he said, “so it’ll be lighter for you guys!” he joked with Mr. Barlow.

Myron J. Hartford Jr. did much of the research on the boat, Ms. Reckford said. Mr. Hartford went to a museum in Maryland that is devoted to the Sultana, she said, where he obtained drawings and information on how things were constructed hundreds of years ago.

Mr. Hartford said the 20-year history of the construction of the Sultana replica is due, primarily, to the amount of time the work crew can devote to the project. At most, the crew puts in a few hours each week, he said.

“If you had two or three guys,” he said, “it would probably take you about six months, full time.”

Age has forced some of the crew who started with the project six years ago to back away. Some of them are in their 90s and no longer capable of doing any work, Mr. Leary said. One possible answer, with the boat’s move to Bourne, Mr. Barlow suggested, may be to recruit students from Upper Cape Tech.

“That would really be a positive thing,” Mr. Barlow said. “They like to get involved in community projects.”

Fred Littleton of Chilmark started construction of the Sultana replica on Martha's Vineyard in 2000. The replica has been at the Woods Hole Historic Museum since 2014.

This has what to do with Bourne history again?