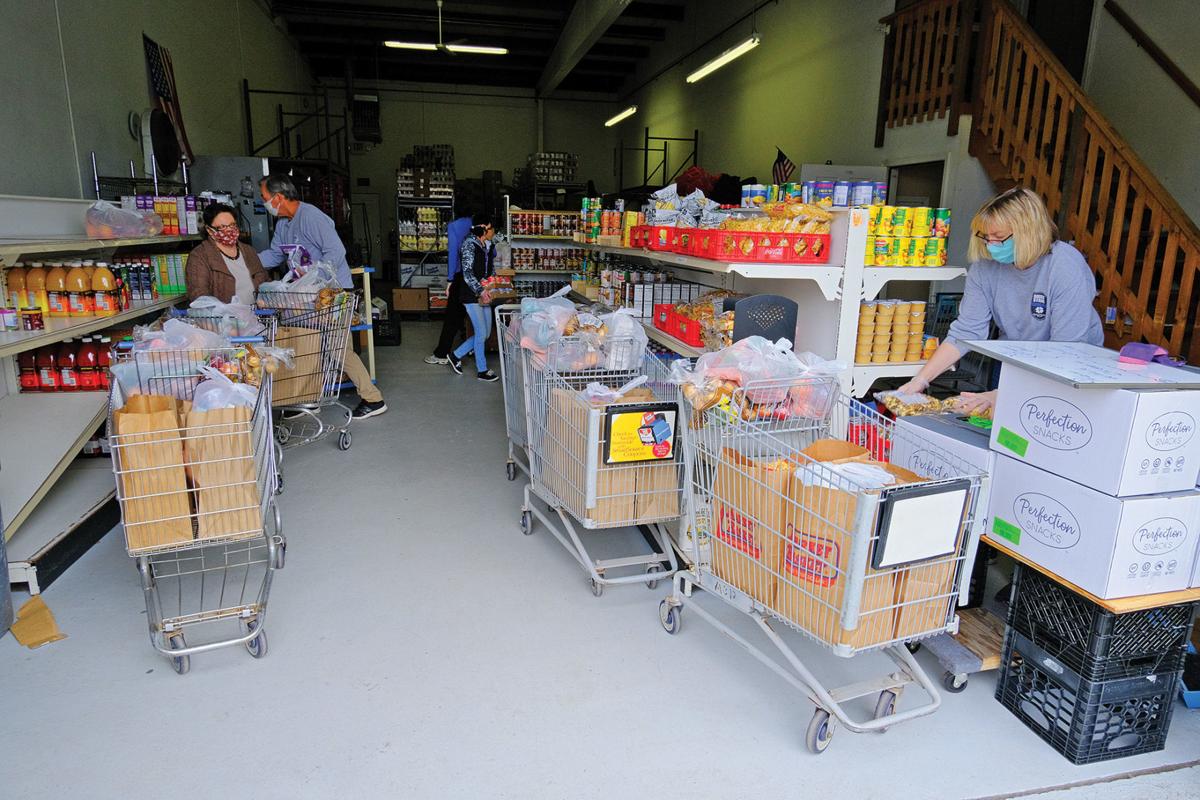 Volunteers at the Bourne Friends Food Pantry pack shopping carts with groceries. The carts will be wheeled out to clients as they drive up. 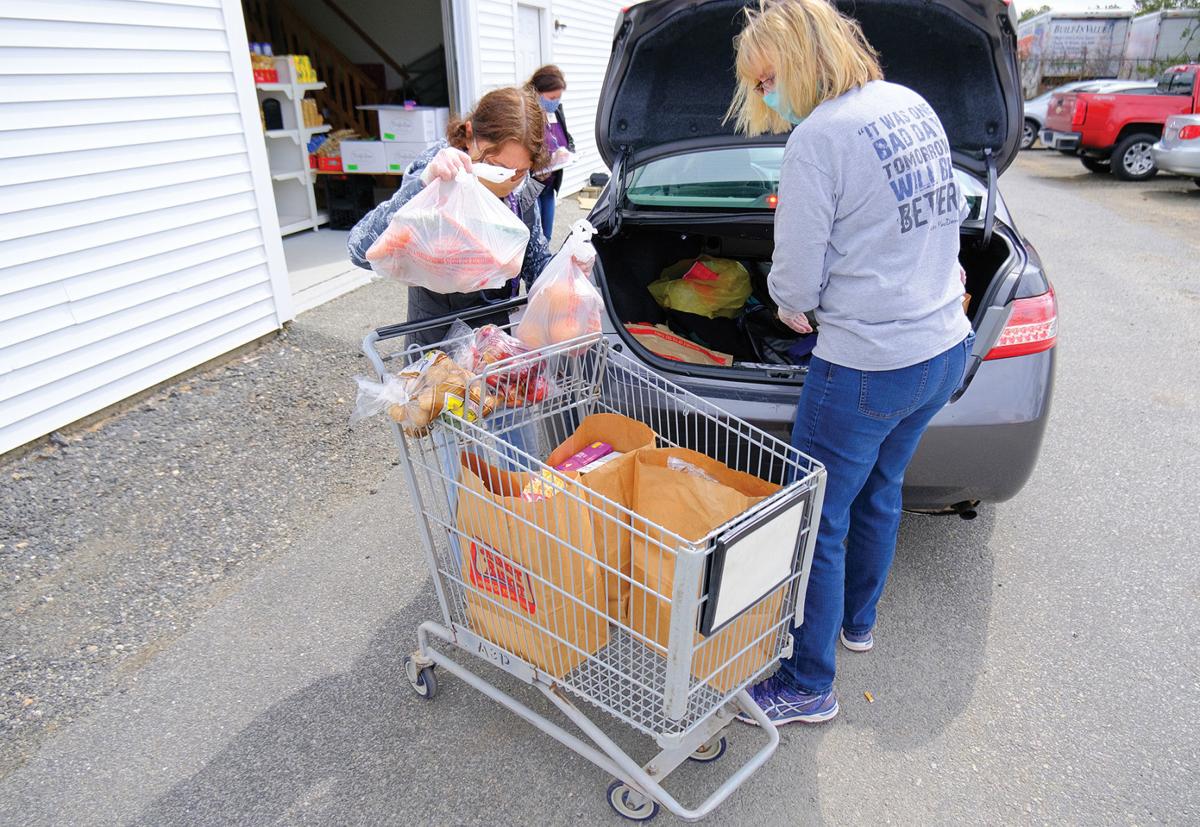 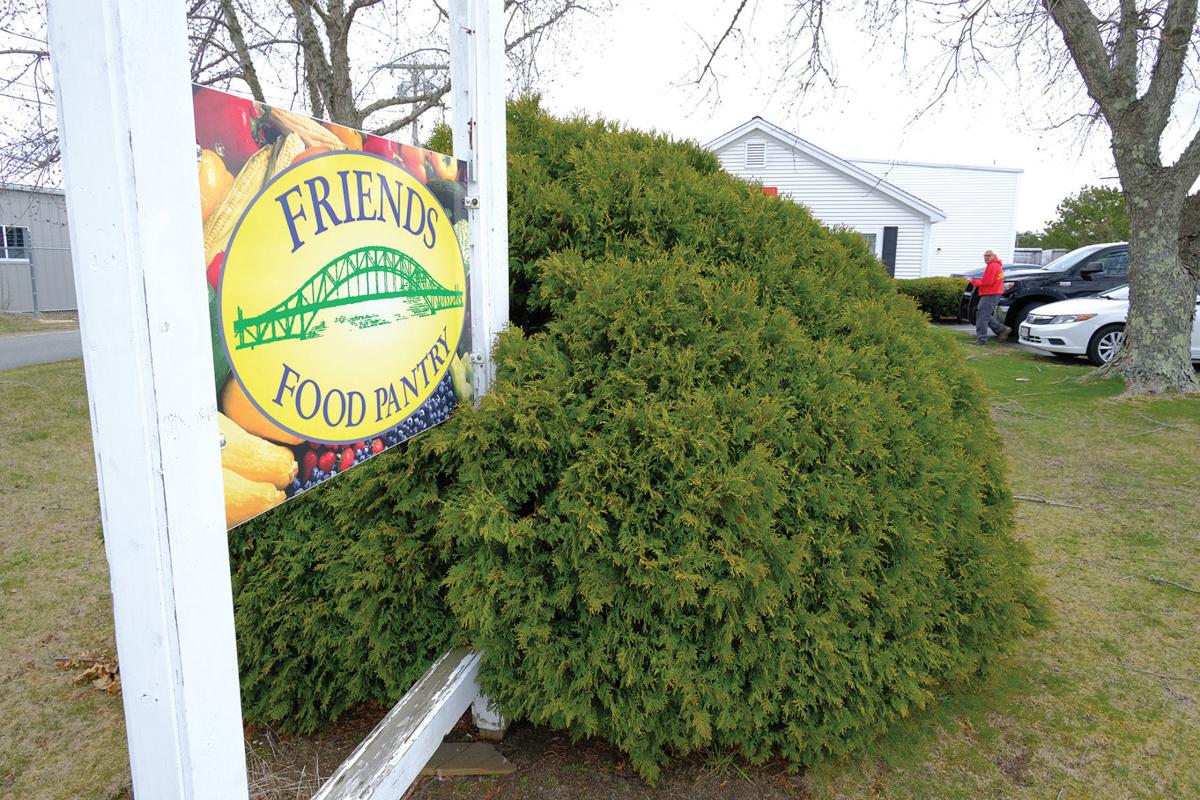 The Bourne Friends Food Pantry is using a drive-up system to avoid direct contact with customers during the COVID-19 pandemic. Customers receive pre-packed bags of groceries and the meat of their choice.

“It’s an interesting mix of new and regular customers,” she said.

Ms. Ross said that while the number of visitors on a given week has increased, the upsurge has not proven to be overly burdensome to her and her staff at the food pantry.

“We’re not overwhelmed, we’re meeting the demand,” she said.

The food pantry is at 20 Commerce Way in Pocasset. Its stated mission is to provide support services to Bourne residents facing economic adversity. That mission is more vital now, she said, during this particularly difficult time, with the pandemic tossing residents from their jobs and into financial hardship.

The need to provide the community with much-needed food has led to the food pantry altering its hours. Before the COVID-19 crisis the food pantry was open one Saturday a month. To accommodate the uptick in need, the pantry is now open every Tuesday from 9 AM to noon.

“So far, it’s working beautifully, but we may have to reassess if demand increases,” she said.

The food pantry has also restructured how it operates, given the coronavirus situation, Ms. Ross said. Under normal circumstances, customers would be escorted through the building by a volunteer and choose the items they wanted. Now, everything is by curbside pickup or home delivery only, she said.

Volunteers put together bags of food—pasta, sauce, canned fruits and/or vegetables, for example. Bags are put together with a featured item such as meat. People are asked what kind of bag they would like and given a meat bag if that is their stated preference, she said.

Masked, gloved and aproned volunteers bring the bags to people waiting in line in their cars. Ms. Ross said the trick is getting enough variety in the bags to satisfy people.

“It’s tough,” she said. “We’re hoping we’re giving them what they need.”

The food pantry also has a home delivery service, which does about 60 deliveries a month, Ms. Ross estimated.

Ms. Ross explained that the food pantry gets its supplies from the Greater Boston Food Bank. She said there had been reports of the food bank running into difficulty supplying organizations with food. That, however, has not been her experience, she said.

“Sometimes it won’t have a wide variety of canned fruits and vegetables, but the Greater Boston Food Bank is doing a great job to keep everyone safe and fed,” she said.

Ms. Ross said that, while the new way of operating is working fine, she does miss having people come into the building. She prefers having that personal connection with the food pantry patrons, she said. She added that she is grateful for the people who volunteer to “come in, mask up and help out.”

Some volunteers have chosen to stay home, she said, and she looks forward to seeing them return under more normal circumstances.

“We have no idea how long we’ll do it this way,” she said. “We’re doing this through the summer, and then we’ll reassess in the fall.”