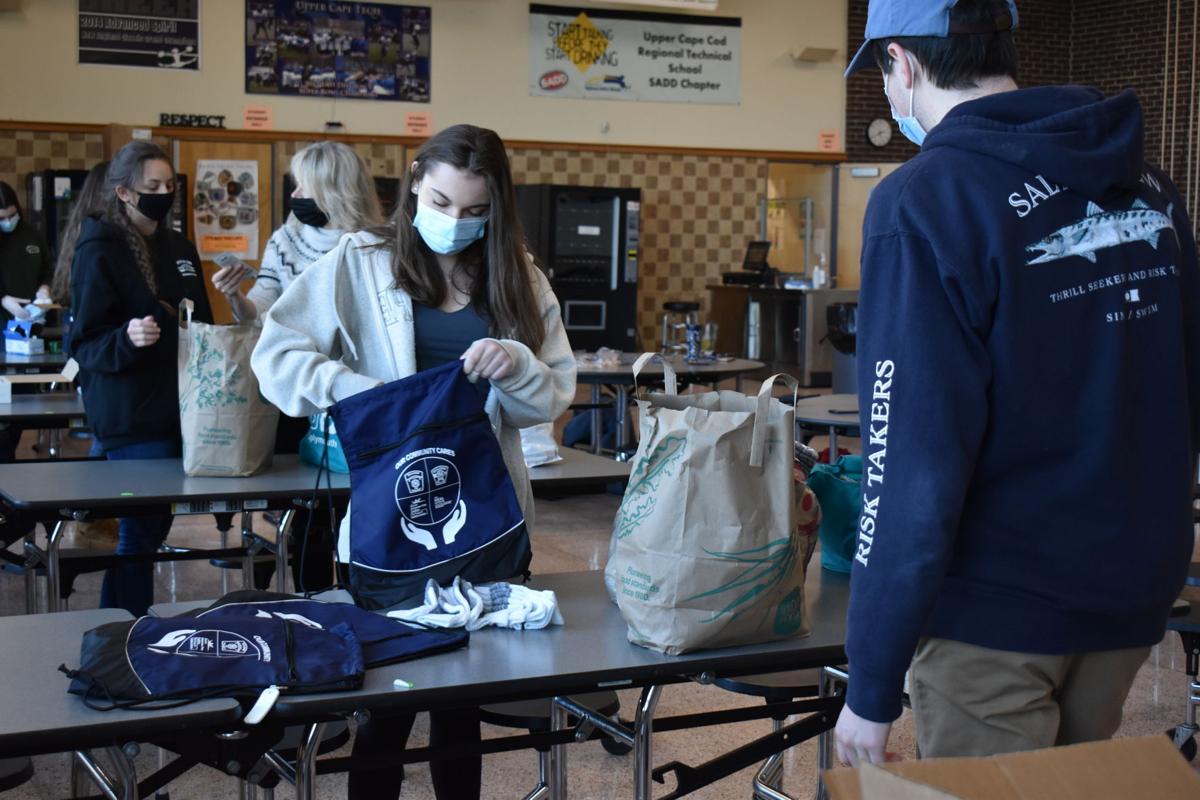 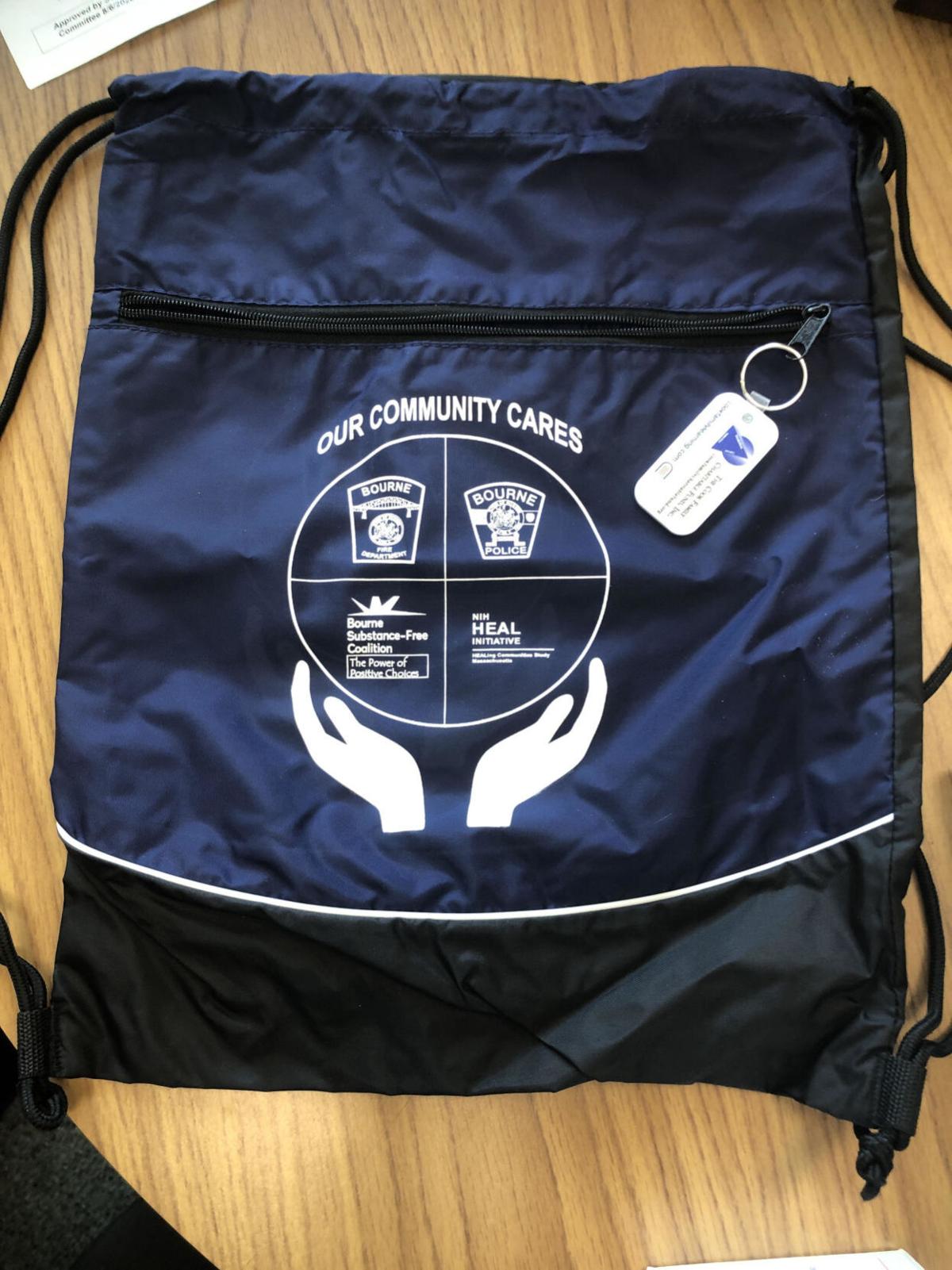 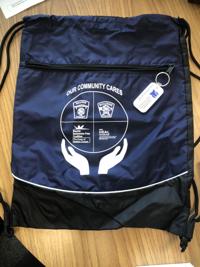 The Bourne Substance Free Coalition is distributing these resource bags to people struggling with an addiction issue. 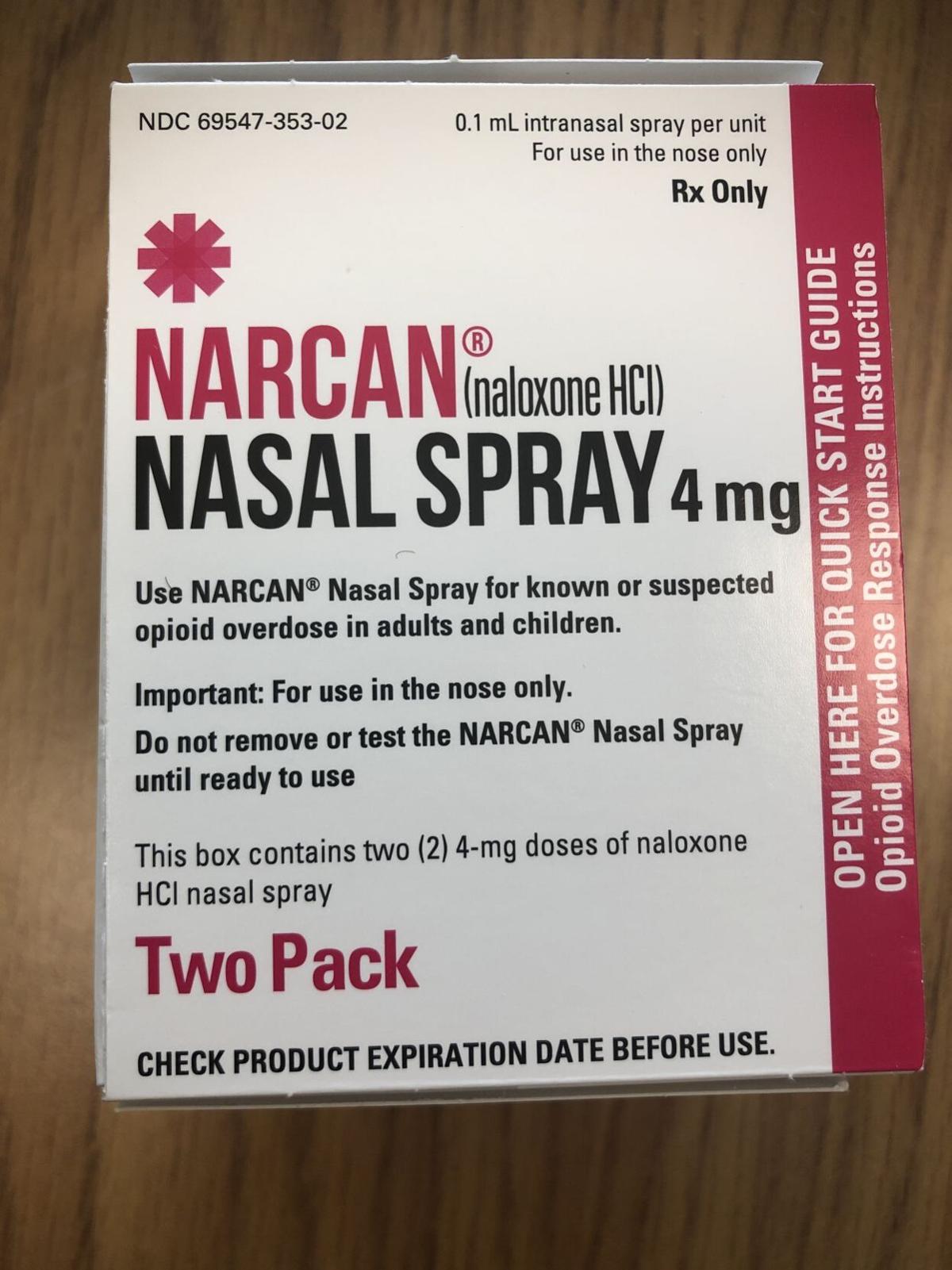 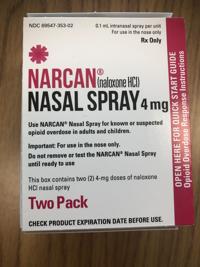 Each bag comes with a box containing two doses of Narcan nasal spray. This is the one item that the students are not allowed to handle.

The Bourne Substance Free Coalition is distributing these resource bags to people struggling with an addiction issue.

Each bag comes with a box containing two doses of Narcan nasal spray. This is the one item that the students are not allowed to handle.

Members of the support group Bourne Substance Free Coalition agree that the COVID-19 crisis has had a negative impact on their efforts at fighting addiction over the past year, but it has not stopped the group in its tracks. The group has stayed committed to its goals of helping people fighting addiction by providing assistance and resources.

One of the coalition’s newest endeavors involves distribution of resource bags to people struggling with an addiction issue. The blue bags feature a graphic that shows a circle sectioned off in four quadrants, with each area featuring a different logo—Bourne Fire Department, Bourne Police Department, the Bourne Substance Free Coalition, and the National Institutes of Health HEAL Initiative.

The circle is held by a pair of hands, while a message of compassion floats above it:

Coalition member Joseph J. Carrara Jr. said the nylon bags contain two doses of the overdose-reversing medication Narcan, along with everyday items including toothpaste, toothbrush, hand sanitizer, mouthwash, socks and facemasks. In addition to the personal care items and the Narcan, information on how to get help with addiction issues will be included, Mr. Carrara said.

Mr. Carrara said the bags will be dropped off as part of overdose follow-up calls made by members of the Bourne Police Department and Bourne Fire/Rescue Emergency Services. The goal, he said, is to follow up on every overdose call and drop off a resource bag as part of each visit.

The resource bags are being funded through money from the group’s involvement in a national program aimed at curbing the opioid crisis. The federal program is called the HEALing Communities Study, and it has a goal of reducing opioid overdose deaths by 40 percent over three years in participating communities, including Bourne and Sandwich.

Elizabeth Griffin is one of the coalition’s founders. A counselor at Upper Cape Cod Regional Technical School, she has a private practice as a counselor and therapist. She said a wide swath of people and groups have donated items for the resource bags, which shows the towns coming together to fight the problem.

Some of the groups and individuals who have donated resources, supplies or money include Parents Supporting Parents; Barnstable County Human Services; Gosnold; Dr. Jose A. Sapia, DDS of Sagamore; Dr. Julie A. Gelnett Orthodontics in Pocasset; the Rotary Club of Bourne and Sandwich; Plymouth Youth Development Collaborative; and the Cook Family Charitable Fund.

“What excites me the most is a collaboration of our town,” Ms. Griffin said, “people donating things for the bag, and police and fire actively working together to help people get resources.”

Overdose data from the past year, released by the Bourne Police Department, show a marked increase in the total number of overdoses. Figures show that in 2020 there were 75 overdoses in Bourne, 11 more than in 2019 and 12 more than in 2018.

That number includes overdoses by opiates, as well as prescription drugs, alcohol and marijuana.

Several years ago, the Bourne Substance Free Coalition initiated a practice of placing purple and black flags in an area just outside the fire station on Main Street in Buzzards Bay—purple for someone who had overdosed, and black for someone who had died from an overdose. Mr. Carrara said the display is taken down during the winter months because of damage from the harsh weather. He anticipates it will be back in place by mid-April.

The HEALing Communities Study is being carried out in partnership with the Substance Abuse and Mental Health Services Administration and the National Institutes of Health. The program brings together scientists to partner with communities to test interventions aimed at combatting the opioid crisis.

Massachusetts is one of four states participating in the study, which focuses on 16 communities that have been hit hard by the opioid epidemic, including Bourne and Sandwich. Boston Medical Center received an $89 million grant from the National Institute on Drug Abuse and the Substance Abuse and Mental Health Services Administration to lead the Massachusetts-specific study.

Money from the study will also pay for the purchase of a van that will travel around town to areas known to be frequented by addicts. The van will have Narcan for those in need, along with other resources, he said. There will also be a trained addiction recovery coach inside the van who can work with people seeking help for their issue.

The coalition is also trying to get commitments from area hospitals to have resource bags given to overdose patients when they are discharged. Beth Israel Deaconess Medical Center in Plymouth has committed, he said. The group is still waiting to hear from Falmouth Hospital and Tobey Hospital in Wareham.

The Bourne Substance Free Coalition formed in 2015, with a goal of developing drug prevention plans and programs that will deter substance use in the community. Those efforts, members agreed, were hampered by the pandemic.

The shutdown made it impossible to conduct in-person meetings and presentations, such as the group’s Hide in Plain Sight seminar, which teaches parents about identifiable signs that their child has an addiction problem.

“We’re hoping that as soon as life returns to normal,” Mr. Carrara said, “we’ll be able to get back to physical involvement.”

Mr. Carrara said that, for him, reaching the town’s youths by getting into the schools is crucial. Setting them on the right track away from a lifetime of addiction is key to his involvement with the group.

“We really want to try to get in the schools as much as possible,” he said, “before someone makes a bad life choice.”

Ms. Griffin concurred, but added that the coalition’s message, and ambition, embraces the entire town.

The towns of Bourne and Sandwich have entered into a national program aimed at curbing the opioid crisis. The federal program called the HEALi…