Police Chief Dennis Woodside has been with the Bourne Police Department for 32 years, nine of them in the department’s corner office. 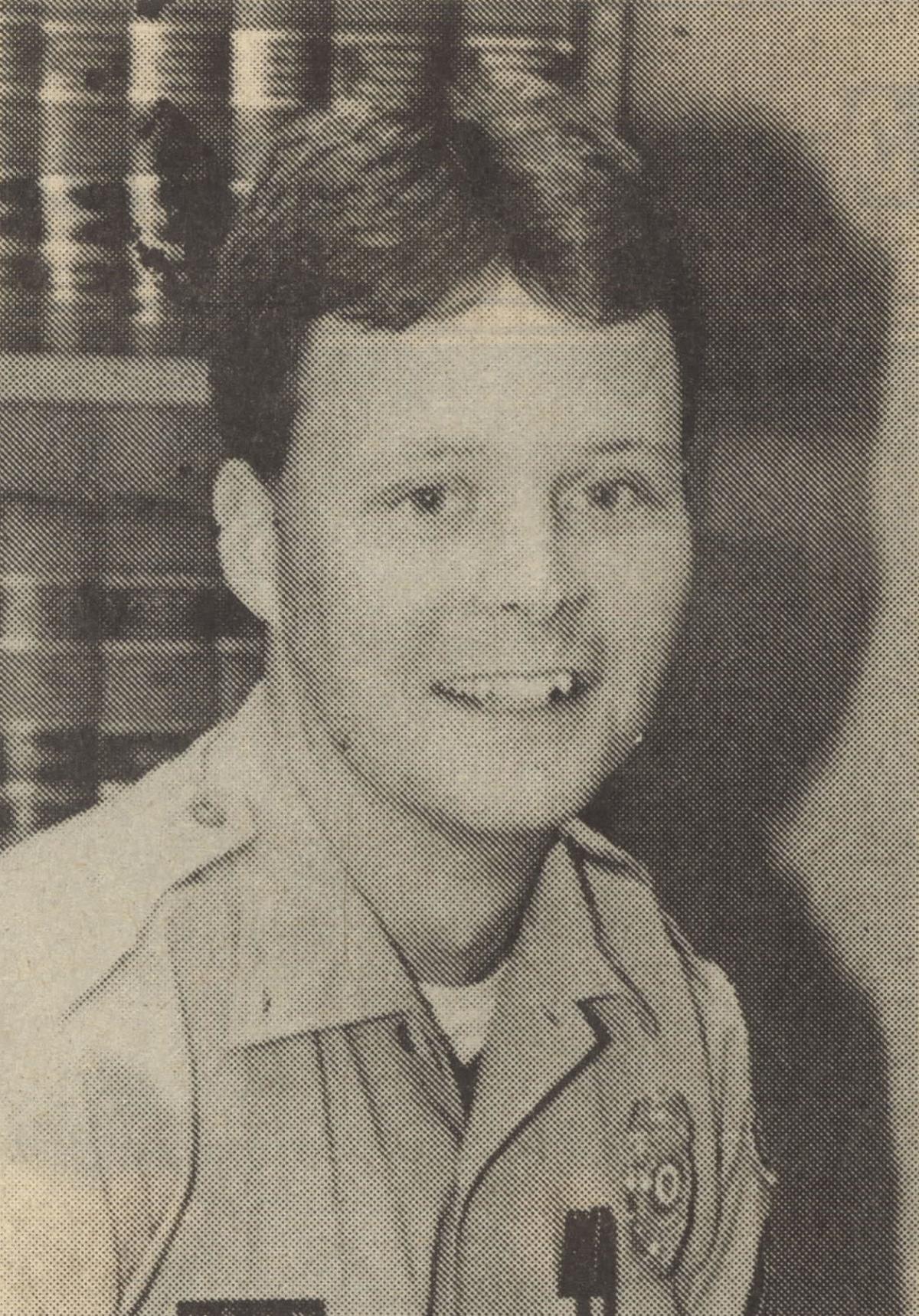 This photograph from a 1993 article in The Bourne Enterprise shows a 27-year-old Dennis Woodside soon after he was promoted to sergeant.

Police Chief Dennis Woodside has been with the Bourne Police Department for 32 years, nine of them in the department’s corner office.

This photograph from a 1993 article in The Bourne Enterprise shows a 27-year-old Dennis Woodside soon after he was promoted to sergeant.

Chief Woodside was born in East Boston, and did not move to Bourne until he was 6 years old, he said. However, once he made the trip across the Cape Cod Canal at that young age, he said, he has stayed with no desire to live anywhere else.

The 53-year-old longtime veteran of the Bourne Police Department is the oldest of four children, born to Robert A. and Dorothy A. Woodside of Buzzards Bay. His siblings, Diane M. Woodside, Doreen A. Dolin and Daniel E. Woodside declined to comment for this article other than to share one insight about their big brother.

“Honestly, we all thought he would be a fireman,” Ms. Woodside said.

She recalled that a friend of the Woodside family was a member of the Bourne Fire Department and that his wife would often take Dennis and her own children to fires that her husband was working.

“It could be 3 AM, he’d be up and ready to go when the fire alarm went off,” Ms. Woodside said.

She added that when the family learned he had signed up for classes in college, everyone laughed when they heard the courses were not in anything like fire science. Chief Woodside confirmed, much to his chagrin given the traditional rivalry that exists between police and fire departments, that he was initially drawn to a career as a firefighter.

“I’m going to throw up in my mouth here, but I was probably leaning toward the fire service, firefighting,” he said.

He said that one of his classes at Western New England College was with Judge Joseph J. Reardon, the former presiding judge in Barnstable District Court. Judge Reardon, he said, shared an observation that a lot of people in law enforcement have that same affinity for firefighting.

“For some reason, the two fields gravitate to one another,” he said.

A summer job working as a police officer in Falmouth when he was 19 years old proved to be the turning point, Chief Woodside said. That, he said, “was probably when I got hooked” on law enforcement over firefighting.

The following year, 1986, he worked as a summer officer in Bourne for two to three months. After that, he went to the state police academy and eventually became a full-time officer. That was more than 32 years ago, he said.

“My career took off right at that age,” he said. “It was fun, I was really young, I was really skinny, I didn’t weigh much, but I enjoyed it. I loved it.”’

Ms. Woodside said that, despite her brother’s fascination with firefighting as a youngster, his switch to becoming a police officer has proven to be the right path for him.

“It’s pretty evident he should have been a cop all along,” she said.

The chief said he has two cousins, both named Kevin, who have served in the Boston Police Department. The older cousin, Kevin A. Woodside, is retired.

Ironically, the younger of the two cousins, Kevin Smith, could have been a Boston firefighter, the chief said. Instead, he chose the police force and is currently on the harbor patrol, the chief said.

“You see similarities like that,” he said, “I don’t know why.”

Chief Woodside joined the Bourne Police Department on September 8, 1987, and never gave a second thought to firefighting. Being a police officer, he said was “fun, rewarding, busy and exciting.”

“We would go out and catch people that were doing things that you wanted to clean up, whether it’s the bars, or the drug use or the drunk drivers or the fights,” he said. “It was just exciting to be able to resolve situations like that.”

Less than six years later, he was promoted to sergeant. He was one of four patrolmen who took the sergeant’s examination, but his score of 85 percent was the highest among the group. The chief was a month shy of his 27th birthday.

“I made sergeant very young,” Chief Woodside said. “The older guys probably didn’t like that very much—some young kid on the job just five and a half years making sergeant.”

Former Bourne Police Chief John A. Ford Jr. recommended the promotion to the board of selectmen in September 1993, and the board approved Chief Ford’s recommendation.

In December 2010, Chief Ford had retired from the force and was serving as chairman of the Bourne Board of Selectmen. On the heels of Earl V. Baldwin’s retirement as police chief that November, Selectman Ford approved another promotion for Sergeant Woodside. The 44-year-old was appointed Chief Baldwin’s successor as Bourne’s next chief of police.

“It’s nice to see an officer come up through the system and get promoted to the top,” Chief Ford said upon Chief Woodside’s promotion.

Bourne Selectman Peter J. Meier grew up in Buzzards Bay and despite a five-year difference in their ages, was friendly with Chief Woodside. Mr. Meier recalled that one of the chief’s best friends lived next door to the Meiers on Catskill Road in Buzzards Bay, so the chief was often around the neighborhood.

As a young man, the chief was also always helpful, Mr. Meier said. He recalled missing the school bus one day in high school and being driven to Bourne High by the chief who was in his early career as a patrolman in Bourne.

Mr. Meier said he was not at all surprised that Chief Woodside chose a career in law enforcement.

“He’s very good at what he does,” Mr. Meier said. “He gives back, he cares about his community, and he loves the Town of Bourne.”

Mr. Meier was also quick to praise the Bourne Police Department under Chief Woodside’s leadership. He described the chief as a balance between his two most immediate predecessors, Chief Ford and Chief Baldwin. Chief Ford, he said, was more policy and administration-oriented, while Chief Baldwin was a more hands-on, rank-and-file type of leader.

“Today’s Bourne Police Department is a well-oiled machine,” Mr. Meier said. “I’m proud of Dennis’s leadership, and I would take our department over any other.”

The chief’s involvement in the town extends beyond supervising the police department. He has also served on a number of different town boards and committees. Currently, he is a member of the Police Facility Building Committee, the group overseeing construction of the new police station off the Route 6 & 28 Bypass Road in Buzzards Bay.

He has also served on the Transportation Advisory Committee, the Bylaw Committee, and the town’s Street and Traffic Light Committee.

Chief Woodside graduated from Bourne High School in 1984. He earned an associate’s degree from Cape Cod Community College. After he became a police officer, he said, he went back to college and earned a bachelor’s degree and a master’s in criminal justice at Western New England University in Springfield.

Chief Woodside said that he has been married to his wife, Andrea M. (Shea) Woodside, for more than 25 years. The couple lives in Pocasset, where they raised their three sons, Dillon, 23, Declan, 20, and Dalton, 18.

Of the three, Dillon recently graduated from the University of Massachusetts in Amherst. Declan and Dalton are currently taking classes in Criminal Justice at Cape Cod Community College, among other things, the chief said. He said that only Dalton is likely to follow in his footsteps.

“He would probably go down this route,” he said.

Chief Woodside said that one of his great frustrations as chief is being stuck behind a desk. He admitted that he does not go out on calls as often as he would like. Commuting to and from work, if he hears an emergency call come in and he is near the situation, “I’m there,” he said.

“I absolutely try to go there,” he said. “I enjoy that kind of stuff, but I also understand my role, that I can’t be out there arresting people.”

Asked what he sees as his greatest strength as a police chief, Chief Woodside said he is fairly organized. He also tries to educate himself about an issue before talking about it, he said.

“If I don’t know something someone might ask about, I won’t make something up,” he said, “I won’t pretend to know.”

In the end, though, whether he is at a crime scene, behind his desk, or providing much needed help to someone, serving the public is where he gets the most fulfillment.

“I get a lot of satisfaction unlocking someone’s car when they’ve locked the keys inside, and I love it when an officer can’t figure out how to do it and I show up and do it quick,” he said with a smile.