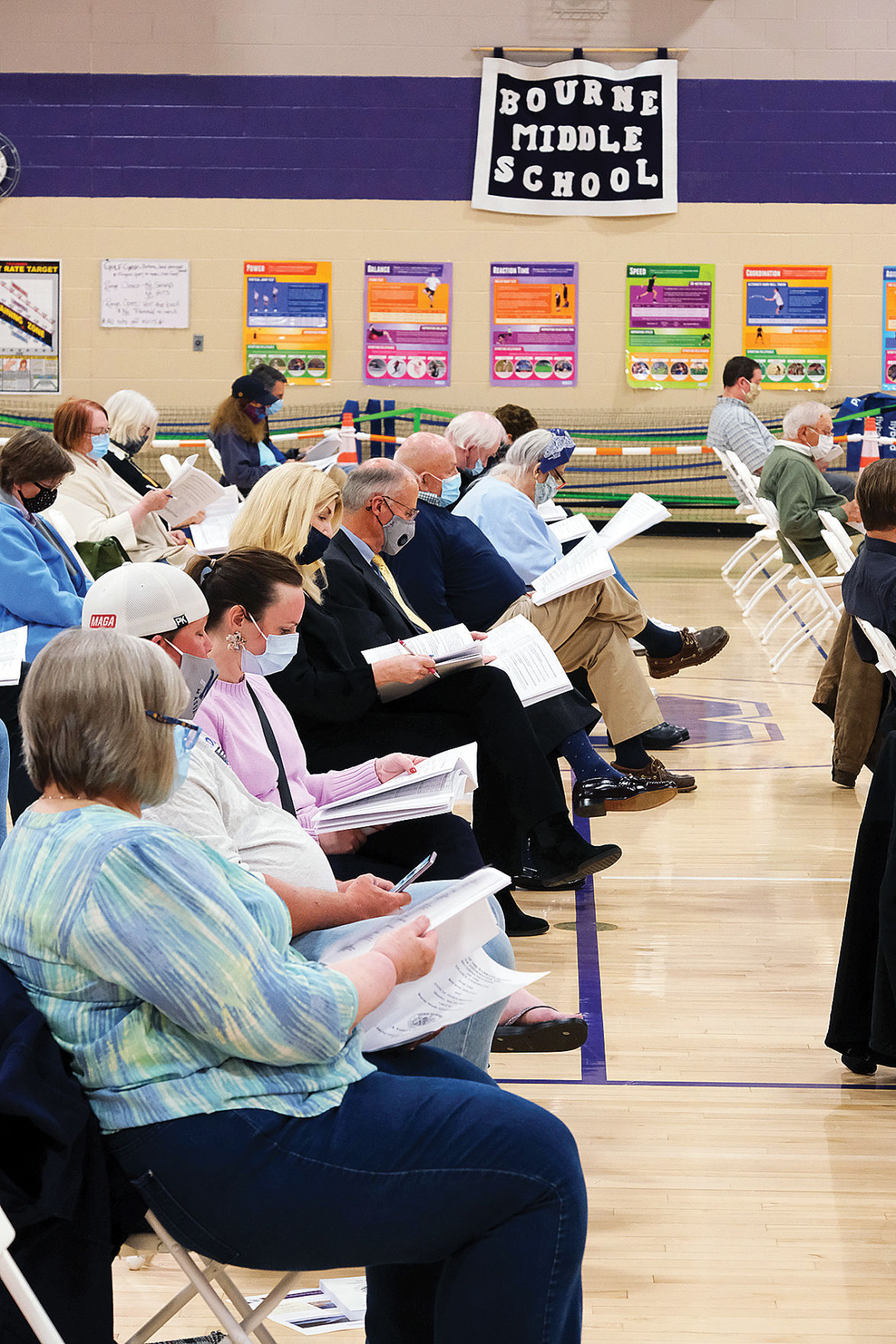 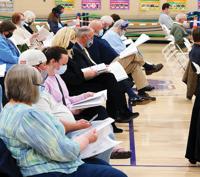 Bourne voters make their way through the warrant at Bourne Town Meeting voters at the Middle School gymnasium Monday. 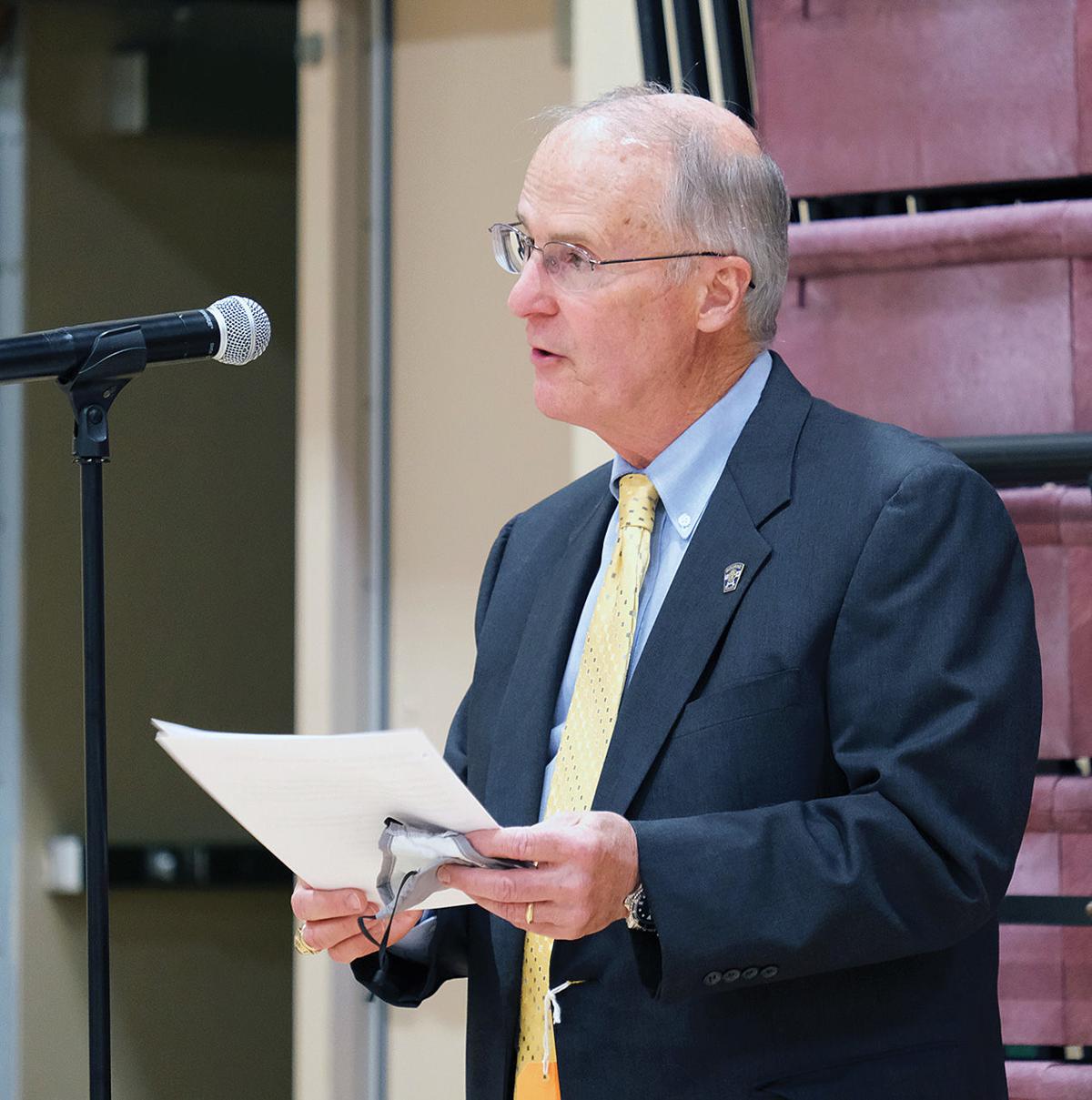 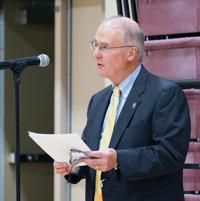 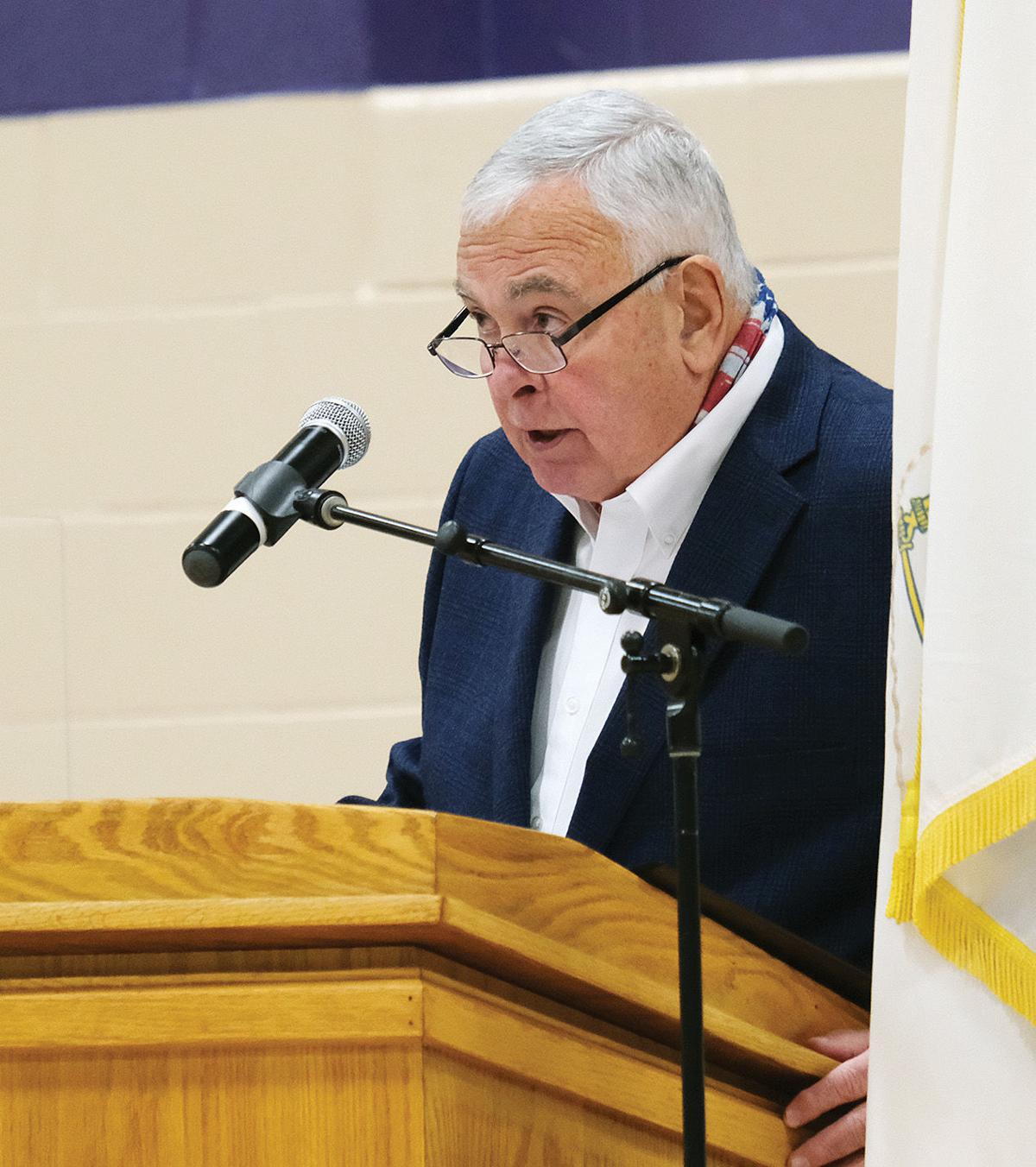 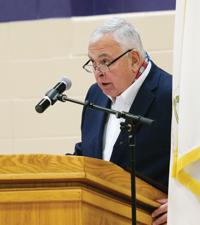 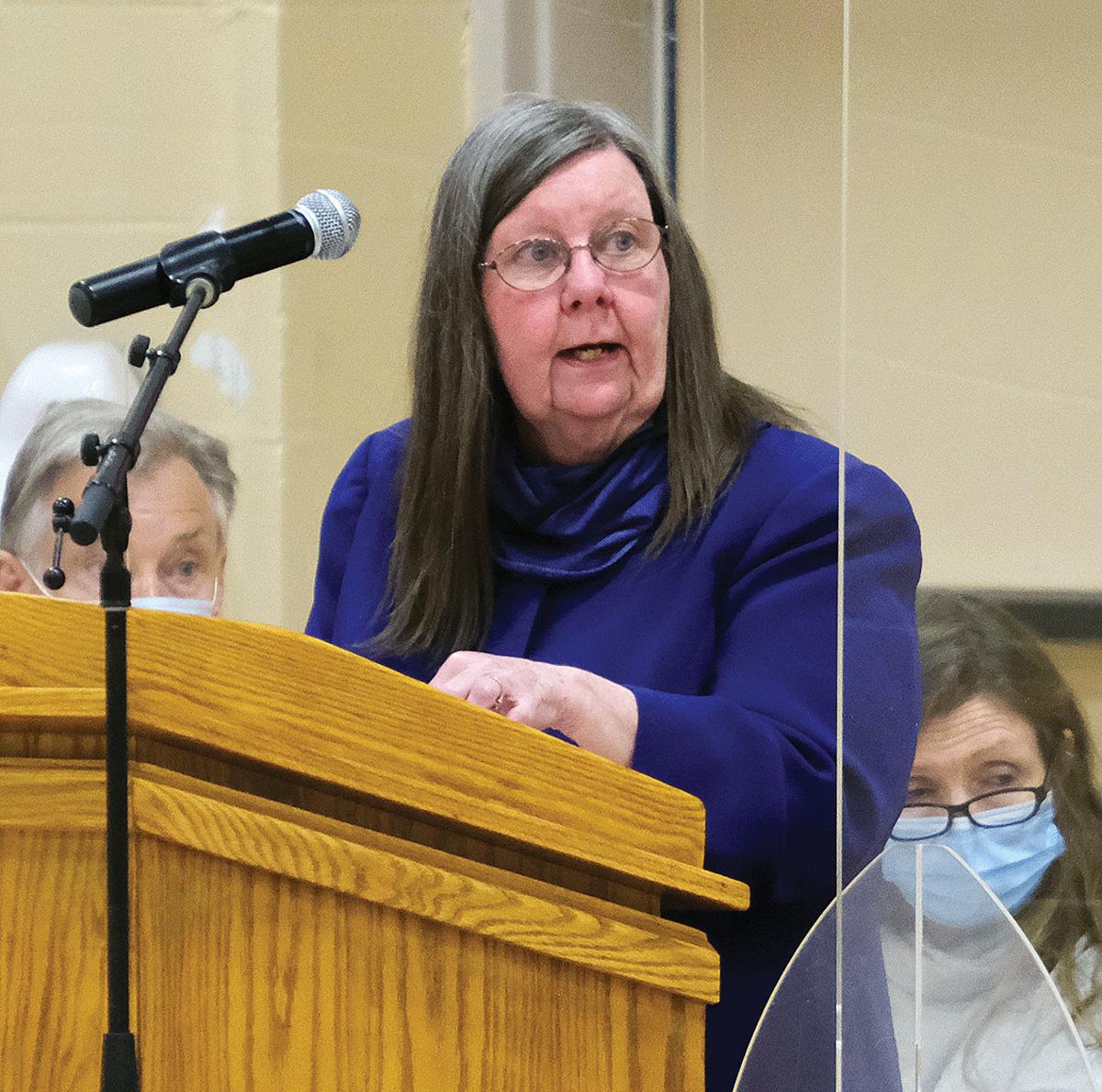 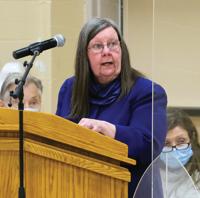 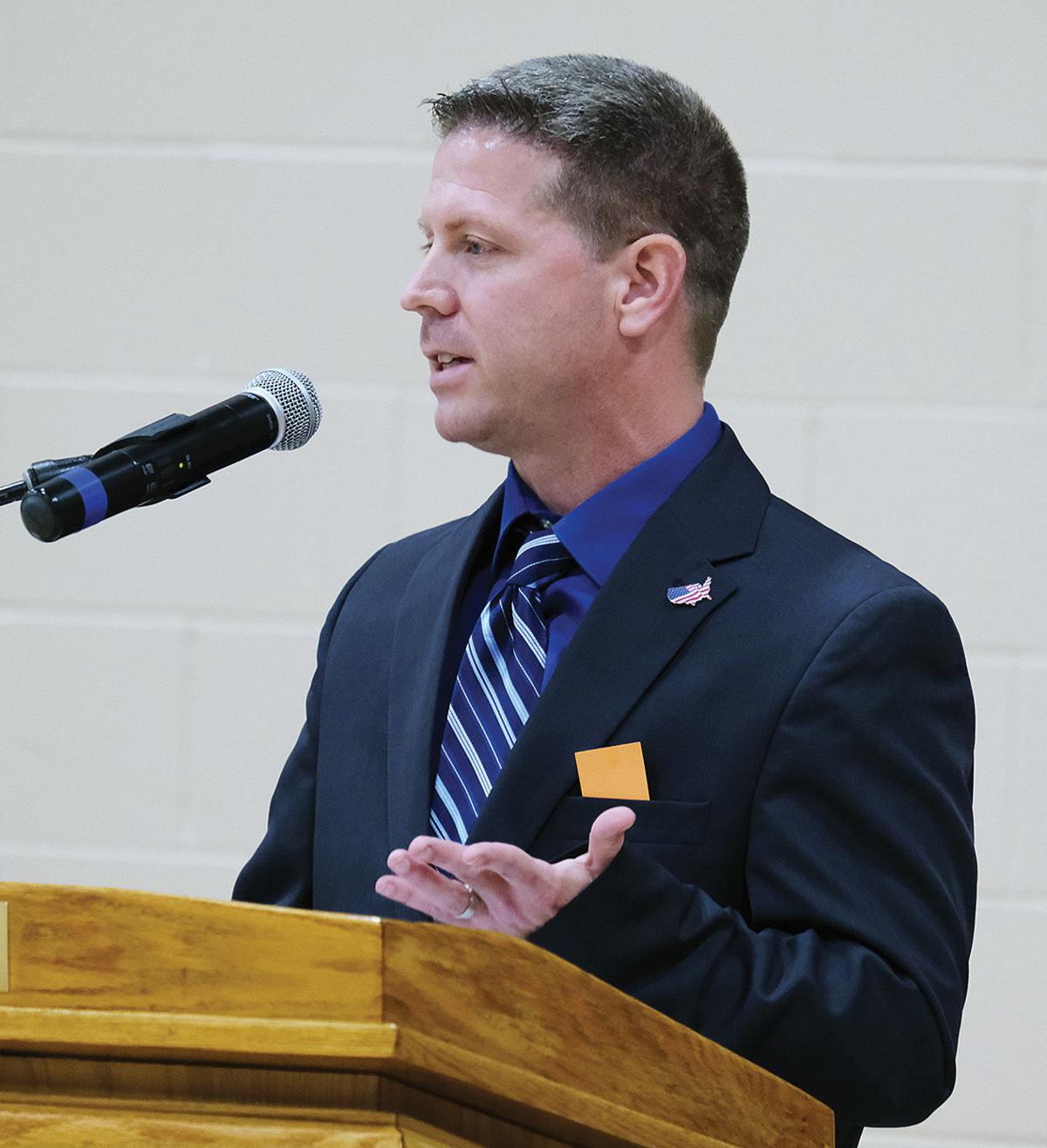 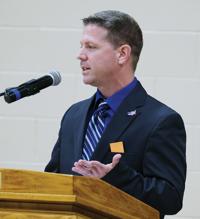 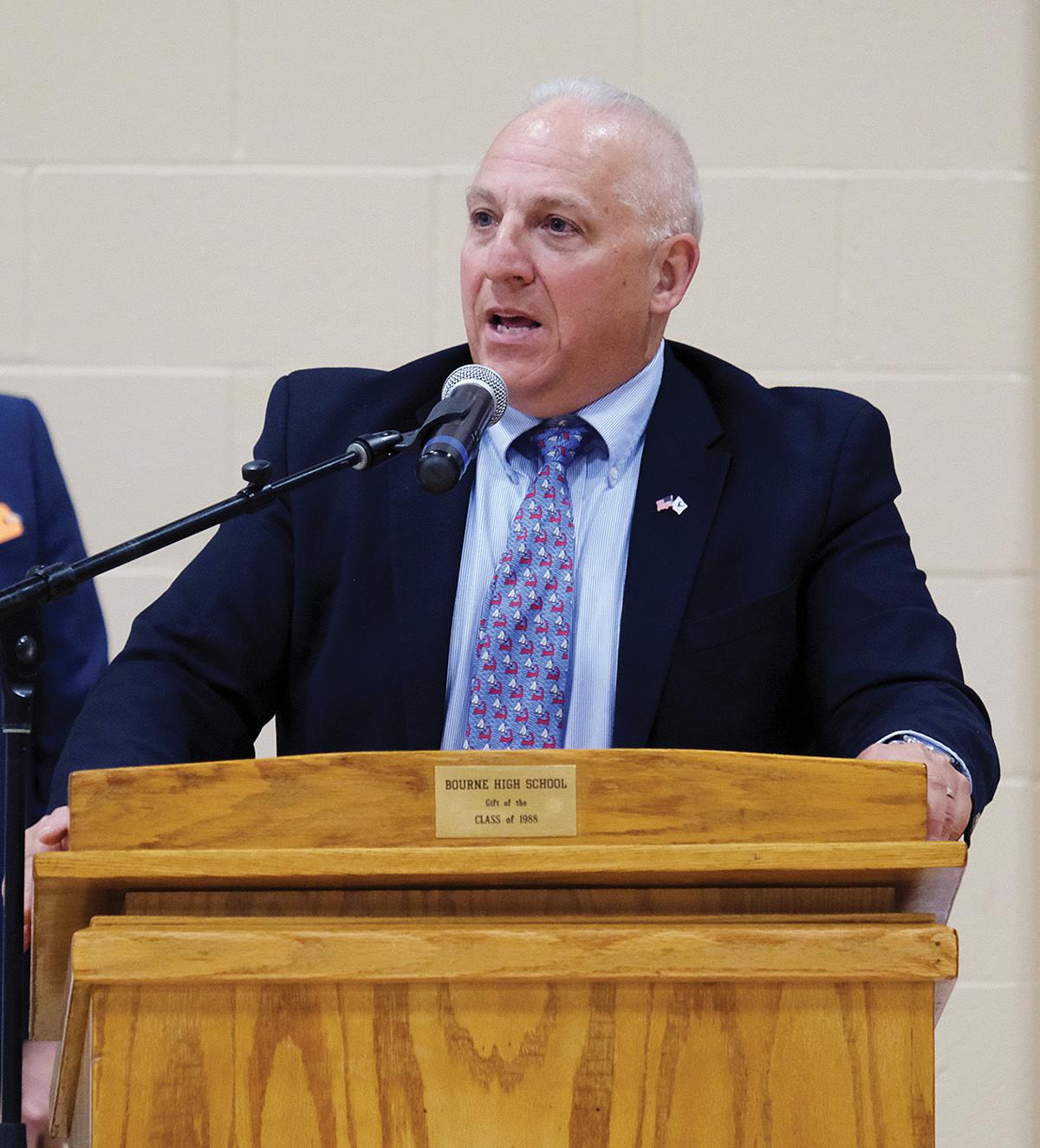 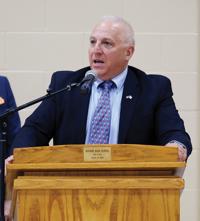 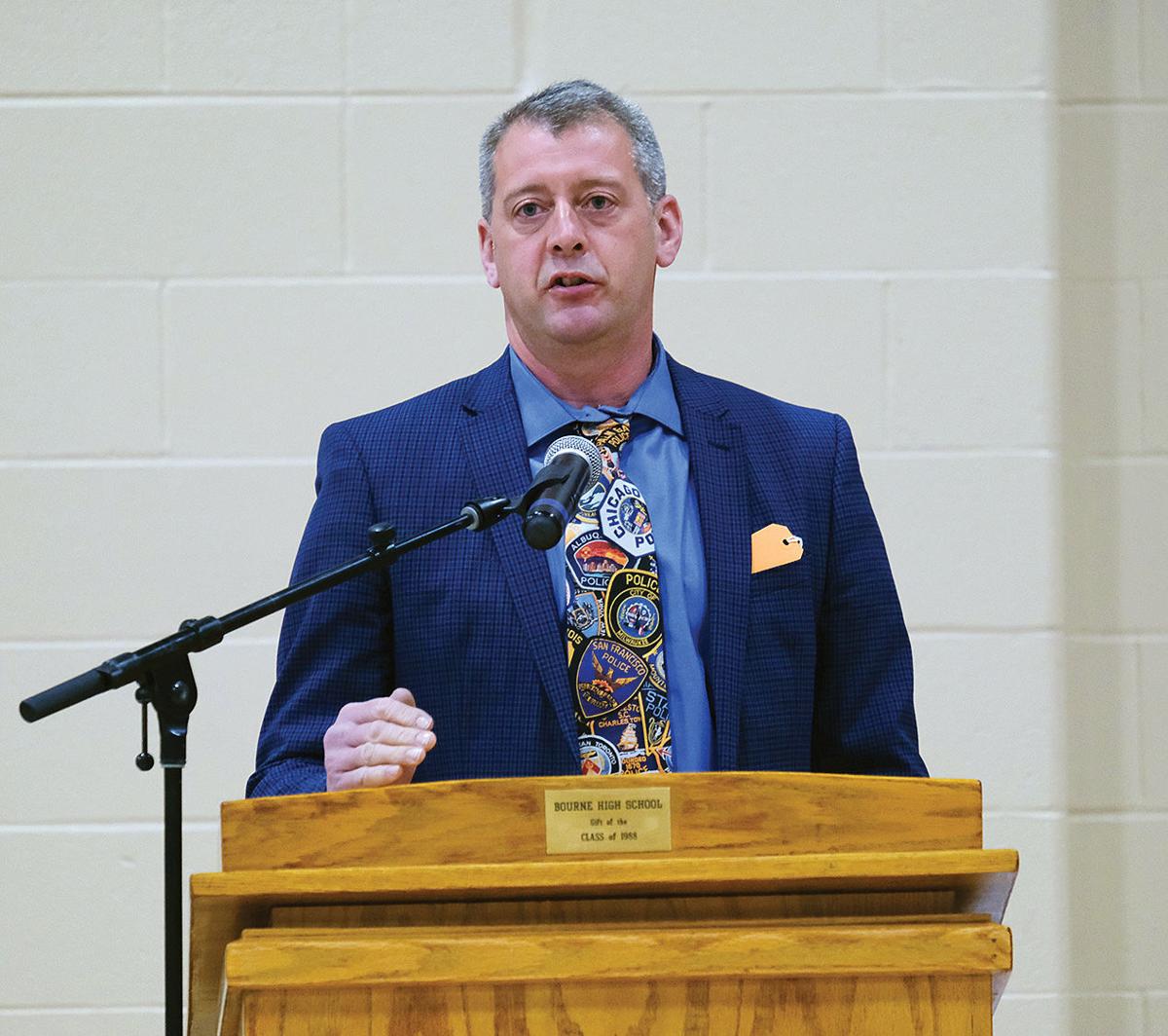 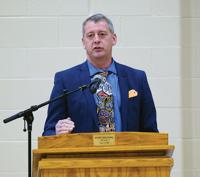 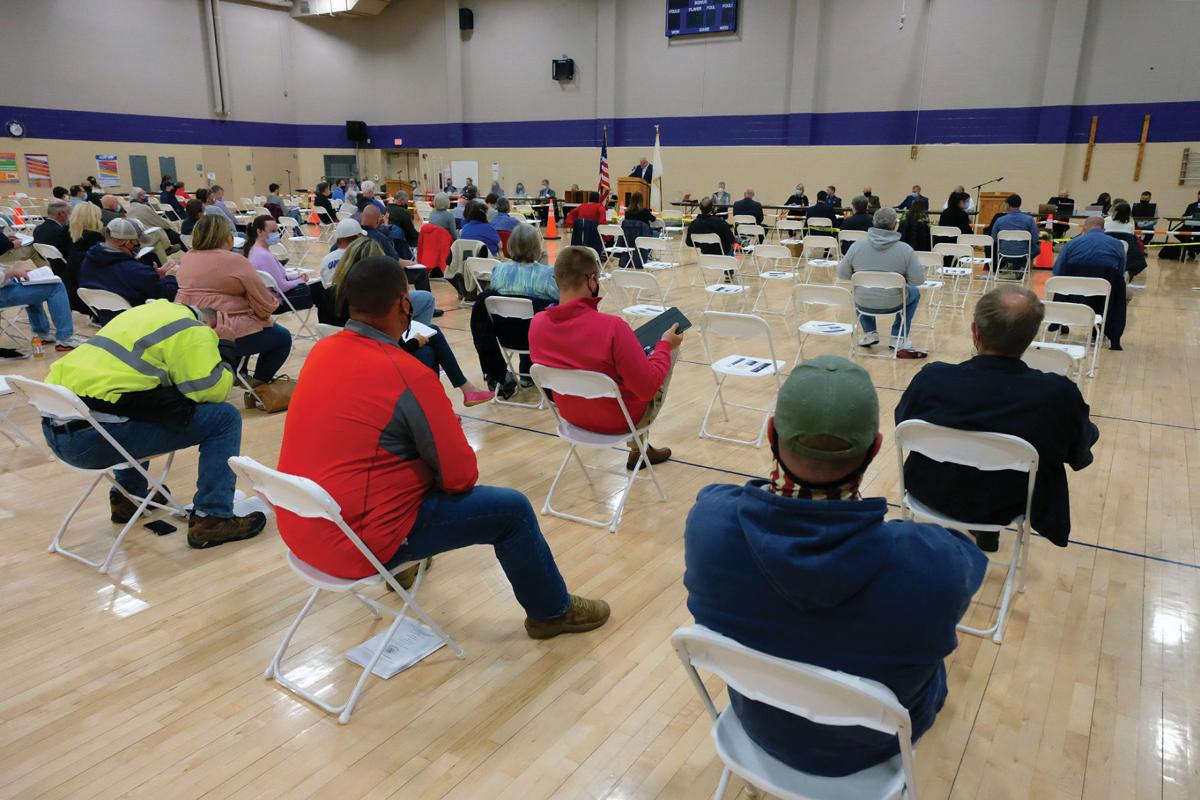 Bourne voters make their way through the warrant at Bourne Town Meeting voters at the Middle School gymnasium Monday.

A new town budget, a new sewer budget and a new method for choosing the town's police chief were among the highlights of this week's Bourne Special/Annual Town Meeting.

Residents voted on a total of 21 articles, including Article 2 on the Annual Town Meeting warrant, authorizing the town’s proposed $71,735,576 general operating budget for Fiscal Year 2022. The approved amount represents a 1.53 percent increase over the current operating budget.

Also approved was Article 3, the proposed $1,357,223 sewer department budget, which included $50,000 in sewer retained earnings to subsidize an increase in user rates. The sewer budget had been heatedly debated between the sewer commissioners and the Finance Committee.

The finance committee wanted to dedicate $135,000 in retained earnings to help decrease user fees. The sewer commissioners wanted to limit the use of retained earnings, which members felt should be saved for emergency infrastructure repairs, not subsidizing rates.

The finance committee eventually voted to recommend the sewer commissioners’ suggested budget with the $50,000 in retained earnings, and Article 3 passed with no debate Monday night.

Several articles on the Annual town Meeting warrant did garner considerable discussion and debate. Among them, Article 13, which called for removing the position of chief of police in Bourne from civil service.

Bourne Town Administrator Anthony E. Schiavi argued that removing the position from the constraints of civil service gives the town greater latitude in who is hired as police chief. Mr. Schiavi said that civil service requires the town to hire whoever tests highest on an exam and does not take into consideration attributes the town might want in its chief of police.

“We’re allowing a system, not the community, to decide who will be police chief,” he said.

Charles K. Noyes, current emergency management director for the Town of Bourne and a former member of the Bourne Police Department, argued against Article 13. Mr. Noyes said he preferred to see a member of the department rise up through the ranks and attain the position of chief through the civil service exam.

“I certainly would like to see the capability for command staff within the Bourne Police Department to seek and attain the rank and position and honor of being the police chief for the Town of Bourne,” he said.

Former Bourne patrolman and current Bourne selectman Jared P. MacDonald countered that removal of the position from civil service would not disqualify members of the department from promoting to chief. Mr. MacDonald added that he worked for three police chiefs, all chosen under civil service requirements, who were “not good managers, not good leaders.”

Article 13 required a majority vote, and at first the article was announced as defeated. Scott Froman of Sagamore asked for a standing vote, arguing that the opponents were simply louder than the people voting in favor. A standing vote was held, and the article was approved by a vote of 62 to 52.

Also debated Monday night was Article 19, which called for the Board of Selectmen to petition the Massachusetts General Court to amend state law. The amendment would allow the Cape Cod and the Islands Water Protection Fund to provide financial assistance for water protection projects in Buzzards Bay in accordance with the town’s intermunicipal wastewater agreement with Wareham.

Bourne’s intermunicipal agreement with Wareham includes paying a share of the cost for operations at Wareham’s regional wastewater treatment plant. Plans are for expansion of the plant, and Bourne will be responsible for a share of that cost.

Bourne finance committee chairwoman Mary Jane Mastrangelo told the audience that Wareham currently is not eligible to receive money from the Cape Cod and the Islands Water Protection Fund. Passage of the article, she said, would allow the selectmen to work with the fund managers on ways for Bourne to use protection fund money “for wastewater projects that our sewer users pay for as customers of Wareham.”

Former selectman Stephen F. Mealy urged residents to vote against Article 19. Mr. Mealy argued that the article should be rejected because Wareham is not a member of the water protection fund. Fund money, he said, is to pay debt service to member towns on projects that the Massachusetts Department of Environmental Protection has deemed water pollution abatement projects under the federal Clean Water Act.

“This does not include agreements such as Bourne has with Wareham for supplying services including the treatment of Bourne’s wastewater,” Mr. Mealy said.

He argued that approval of Article 19 could jeopardize the water protection fund agreement that the 15 towns on the Cape have entered into, which already provides funding for projects designed to clean up wastewater issues.

Current Bourne Board of Health member Galon L. (Skip) Barlow agreed, saying he wanted to know specifically what any letter to the general court would request. The article, as presented, “is ill-prepared,” he said.

“I think we all need to know specifically what is being asked for here, not give somebody the authorization to develop something that we know nothing about,” he said.

Bourne Board of Sewer Commissioners chairman James L. Potter stipulated that Bourne’s arrangement with Wareham was not considered when the water protection fund was established. Mr. Potter said that passage of the article would allow creation of the language that would make Bourne eligible for the town’s 17.91 percent share of capital costs associated with the Wareham plant.

Mr. Schiavi noted that the article was left purposely unspecific in its wording to provide latitude when crafting the petition that would go to the general court. He said that if the article contains specific language, there could be no negotiation over the wording. He added that the town should not restrict where funding is received from, and how that money is spent, which would ultimately penalize residents.

“When we have to pay for these wastewater projects,” he said, “if we don’t go after other sources of funding, including this, it’ll fall to the taxpayers.”

The remaining articles on the Annual Town Meeting warrant passed with little to no discussion or debate.

Article 1 was an omnibus consent article that lumped several motions into one. It requested authorizing town officials to approve various contracts, apply to grant programs, accept state funding such as Chapter 90 for road maintenance and establish revolving funds and set the salaries for elected officials. The article passed unanimously.

Residents unanimously approved Article 6, which gave approval to hear reports and recommendations from boards, committees and town officers. Mr. Mealy, who chairs the Charter Review Committee, spoke of the outreach his group has done, speaking with officials in neighboring towns, as well as current and former Bourne officials.

Article 8 was another community preservation committee request. The CPC asked for $1,474,359 to fund CPA projects undertaken by the Bourne Archives, the Bourne Historical Commission, the Bourne Housing Partnership, the Bourne Affordable Housing Trust and the Open Space Committee.

Article 11 approval would transfer $20,000 from free cash for use by the Human Services Committee to provide grant funding to human services organizations. The money used to be in the town budget but has been moved to an article to comply with Department of Revenue regulations.

Article 12 asks to use $50,000 in free cash to replenish the town’s Special Education Reserve Fund. A second appropriation request is expected to be made at the fall Special Town Meeting.

Article 14 was a citizen’s petition requesting that town officials communicate with Governor Charles D. Baker Jr. regarding safe storage and protection of spent fuel rods from the Pilgrim Nuclear Power Station in Plymouth.

Anti-nuclear activist Diane Turco of Harwich addressed the article and called nuclear waste from the abandoned plant “the most dangerous toxic substance known to humankind.” The article was approved with just one nay vote.

Passage of Article 16 resulted in amending the current language in the town’s Wetlands and Natural Resources Protection bylaw. The new language gives the Conservation Commission more flexibility in permitting projects within the velocity flood zone.

Article 17 was also approved unanimously. It amended the rules and regulations section of the town’s Wetlands and Natural Resources Protection bylaw by expanding the Conservation Commission’s authority. Previously, the commission could only apply its regulations on projects related to docks and piers.

Article 18 was the Hawkers and Peddlers bylaw written by the Bourne Police Department that residents approved in 2019 but was rejected by the state. There were questions regarding some of the wording in the bylaw, so the Attorney General’s office sent it back to be reworked and reconsidered. The revised article was approved unanimously.

Article 20 called for deleting an entire section of the town’s zoning bylaws relative to floodplain regulations and replacing it with a new section. Town Engineer Timothy P. Lydon said adopting the proposed bylaw change would bring the town into compliance with the federal government and the National Flood Insurance Program. Recommendation of the article was approved by the Bourne Planning Board in March, and the article passed with unanimous approval Monday night.

The Special Town Meeting warrant had only one article. That article requested approval of $56,742.03 to pay unpaid bills that were received after the close of the previous fiscal year. It passed unanimously.