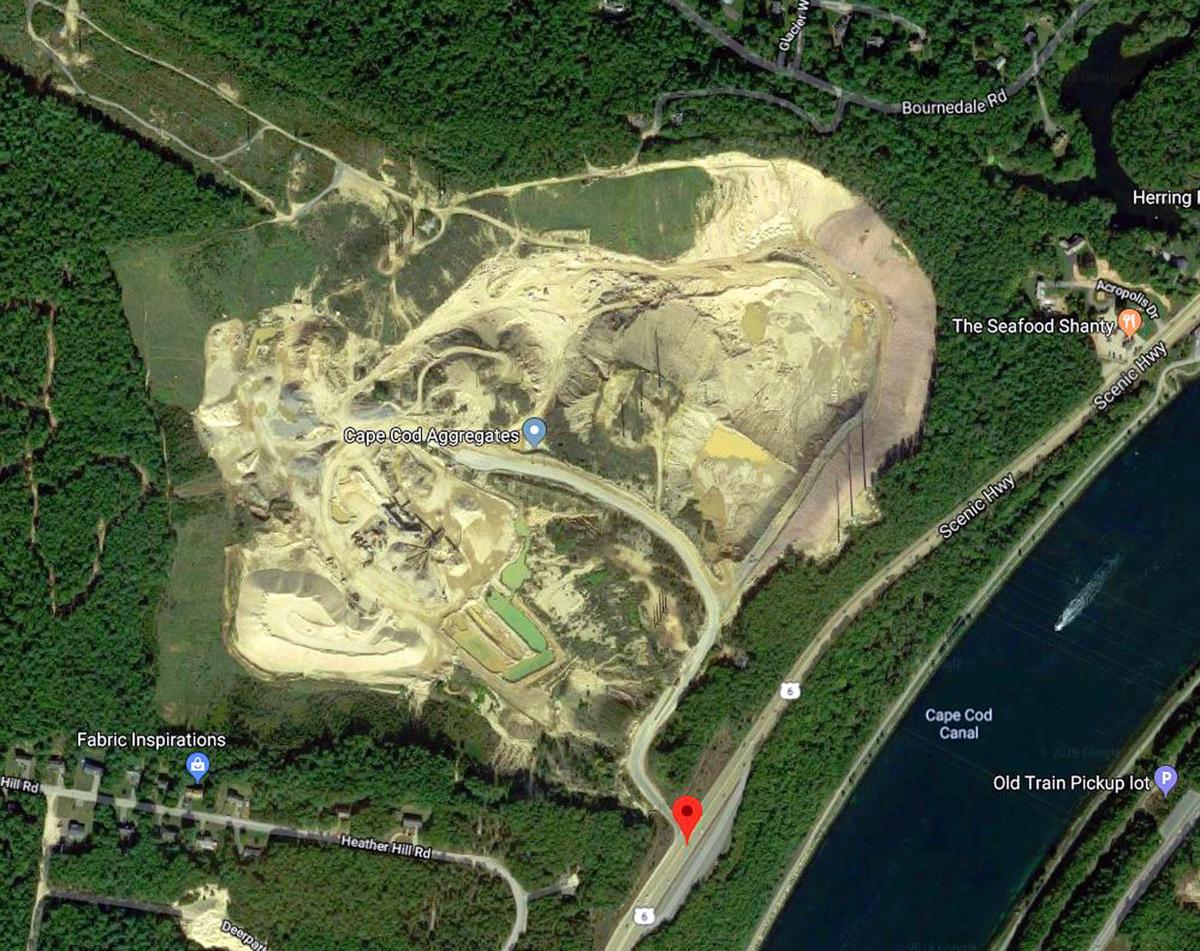 Mining is scheduled to end today at Cape Cod Aggregates, which covers 126 acres off Scenic Highway. 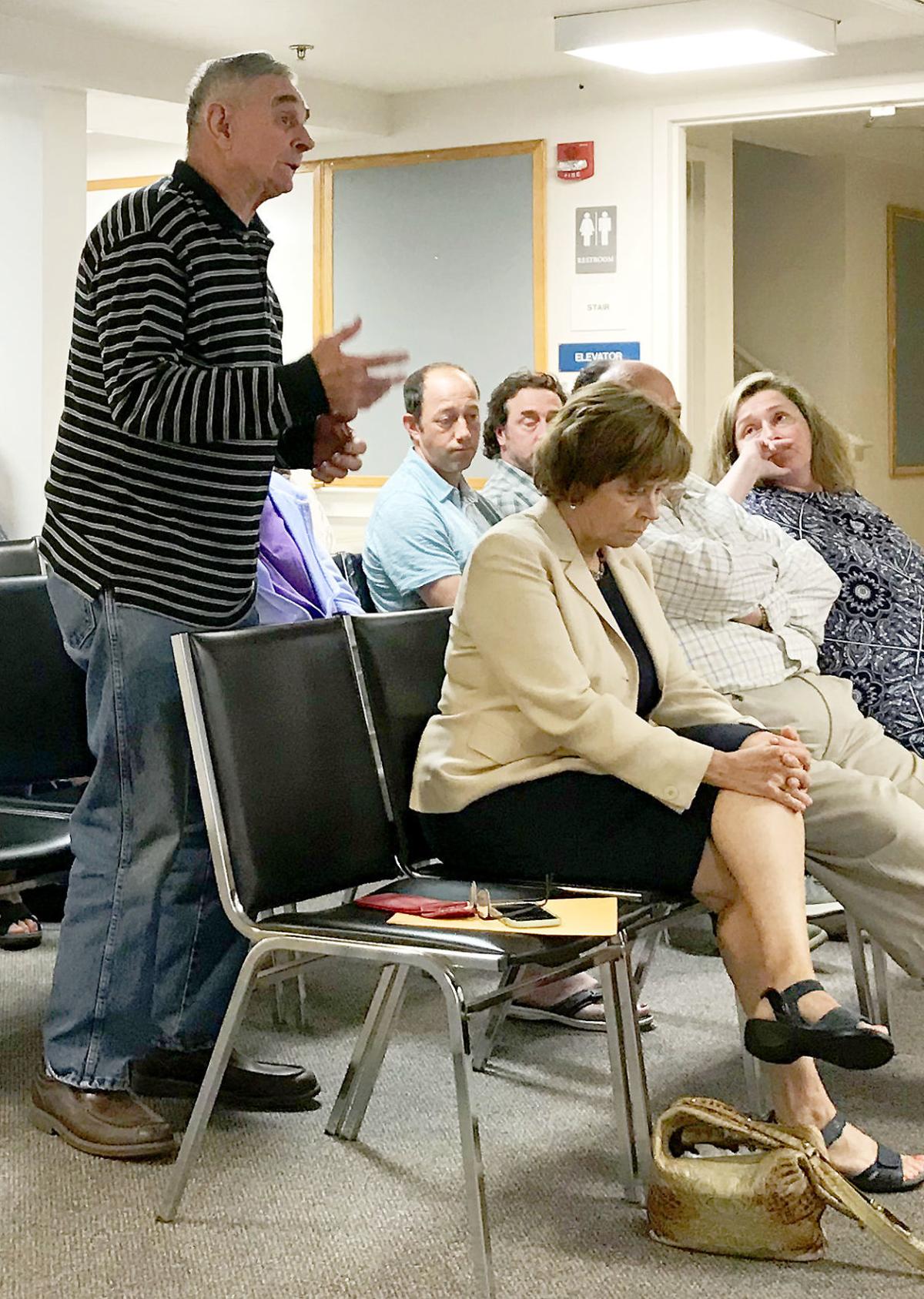 Bournedale resident Lewis Perry questions whether Cape Cod Aggregates owner Sam Lorusso will keep to his word and restore his Bournedale location. Mr. Perry said that the company has been granted numerous extensions and always comes back to the board for more time.

Mining is scheduled to end today at Cape Cod Aggregates, which covers 126 acres off Scenic Highway.

Bournedale resident Lewis Perry questions whether Cape Cod Aggregates owner Sam Lorusso will keep to his word and restore his Bournedale location. Mr. Perry said that the company has been granted numerous extensions and always comes back to the board for more time.

Cape Cod Aggregates, the construction materials processing company, is scheduled to cease operations at its site off Scenic Highway in Bournedale as of Friday, June 21.

The company will no longer mine materials, and instead will focus solely on removing all existing processed materials and restoring the site.

The company will also post a $1.5 million bond with the Town of Bourne to ensure the cost of remediating the area will be covered if the town has to take on that responsibility.

On Wednesday night, company owner Samuel A. Lorusso appeared before the Bourne Zoning Board of Appeals. Mr. Lorusso assured board members that all mining and crushing operations would end today, one week earlier than the June 30, 2019, deadline the ZBA approved last December.

Cape Cod Aggregates is on 126 acres just off Scenic Highway in Bournedale. The company excavates the site for materials that are used by the construction industry. Items sold include various forms of stone, stone dust, gravel and sand.

In addition to Bourne, the company has locations in Falmouth, Hyannis, Sandwich, Freetown and New Bedford.

The agreement reached last December called for processing operations to cease and the site to be fully remediated as of June 30. Mr. Lorusso appeared before the zoning board, with his attorney Diane C. Tillotson, and initially requested a six-month extension to finish restoration efforts.

Pressed further, Mr. Lorusso said that removing all existing materials and reconditioning the land would take considerably longer, and asked for a one-year extension. He now has until June 30, 2020, to remove material and equipment and revegetate the property.

In addition, Mr. Lorusso agreed to increase the $250,000 bond he has with the Town of Bourne to $1.5 million. The money can be used by the town for restoration efforts in the event that Cape Cod Aggregates, for some reason, is unable to recondition the area.

Restoration involves filling in the excavated area and reestablishing native vegetation. As part of his original agreement with the town, Mr. Lorusso put up a $100,000 bond. That amount was increased to $250,000 during the zoning board meeting back in December.

Wednesday night, Mr. Lorusso estimated that it would cost $1 million to fully restore the gargantuan pit he has mined since 2006. He agreed to the higher amount out of consideration for the possibility that costs could increase over the coming year.

Associate board member Kathleen Brennan chastised Mr. Lorusso for not abiding by the agreement struck in December. Ms. Brennan said the board, based on the company’s promises, had assured neighbors that everything, operations and remediation, would be completed by the end of this month.

“He promised the abutters six months ago he would be over,” Ms. Brennan said, “and I feel bad about that. We all voted that six months is it, the end.”

Ms. Tillotson said the company’s understanding was that processing operations, which involves the crushing of excavated material, would cease as of June 30. She said that partial restoration of areas has been underway since 2006. Full restoration of the area, she said, would take longer, which was why they were asking for the six-month extension.

“We appreciate that the board, and the abutters, have been very patient with us, “ she said, “but I think that whatever the disturbance was, and the impacts to the abutters, that will certainly be over.”

For years, neighbors have complained that the mining and processing of material by Cape Cod Aggregates has led to dust permeating the air, covering their homes and making their lives miserable.

Lewis H. Perry of Bournedale Road has been one of the company’s severest critics. Wednesday night, he noted the numerous extensions that the board had already granted the company, dating back to 2010, and questioned whether Mr. Lorusso would abide by any decision from the board.

“They say all these things all the time: Gonna do this, gonna do that,” he said. “They don’t do nothing! All they do is dig dirt and make dust. I think enough is enough!”

David Ingersoll of Head of the Bay Road said his family owns property adjacent to Cape Cod Aggregates. Mr. Ingersoll complimented the Lorusso family for donating the land on which Bournedale Elementary School was built. He said the town should hold the family to their word, regarding restoration of the excavation pit, “but we should also remember they’ve been good to the town.”

Mr. Ingersoll added that if the board were to shut down the Lorussos and they left without remediating the site, it would be left to the town to do the job. That, he said, would be a big mistake.

“I would rather have people who are experienced with giant bulldozers and moving machinery around doing that,” he said, “than having the Town of Bourne taking it on, and me having to pay for it in taxes.”

The board also stipulated that company manager David Peterson must appear before them and provide monthly updates on the shutdown efforts. Mr. Peterson’s first report to the members will be expected at the board’s meeting on August 1.