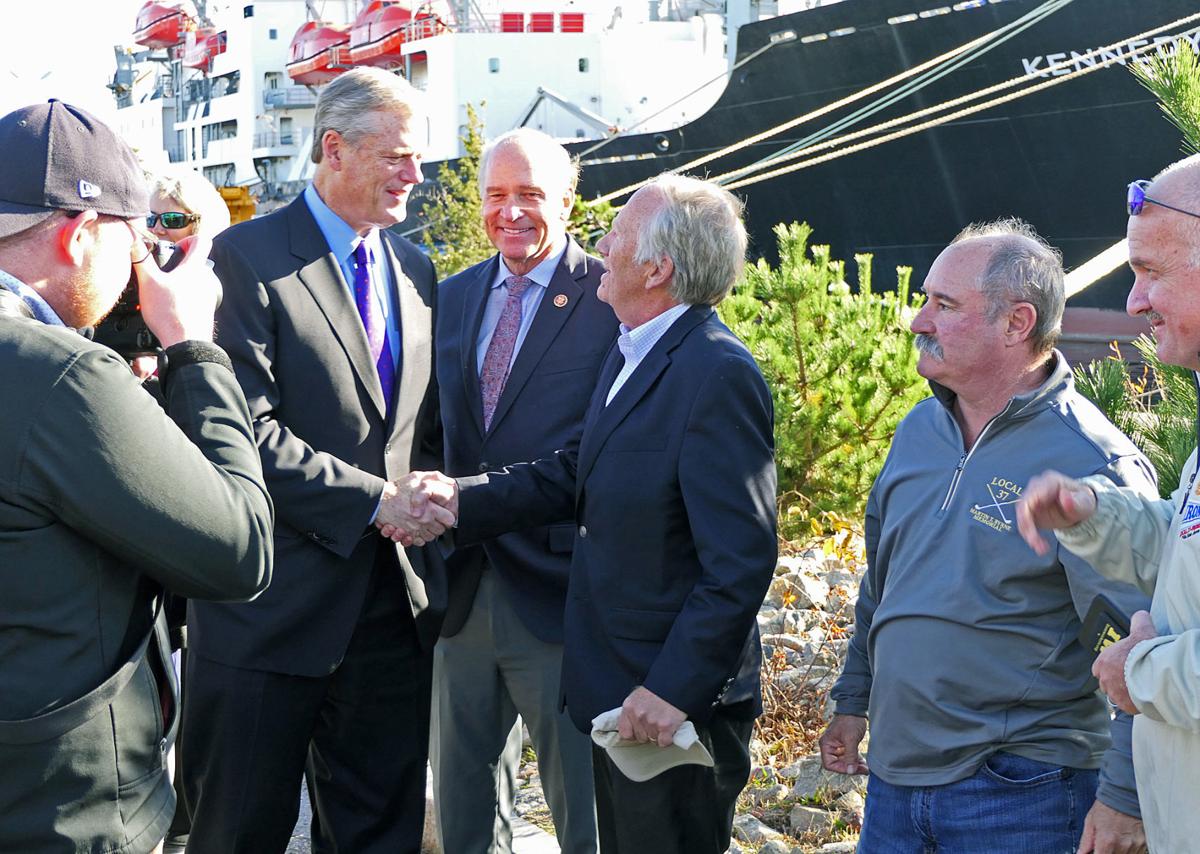 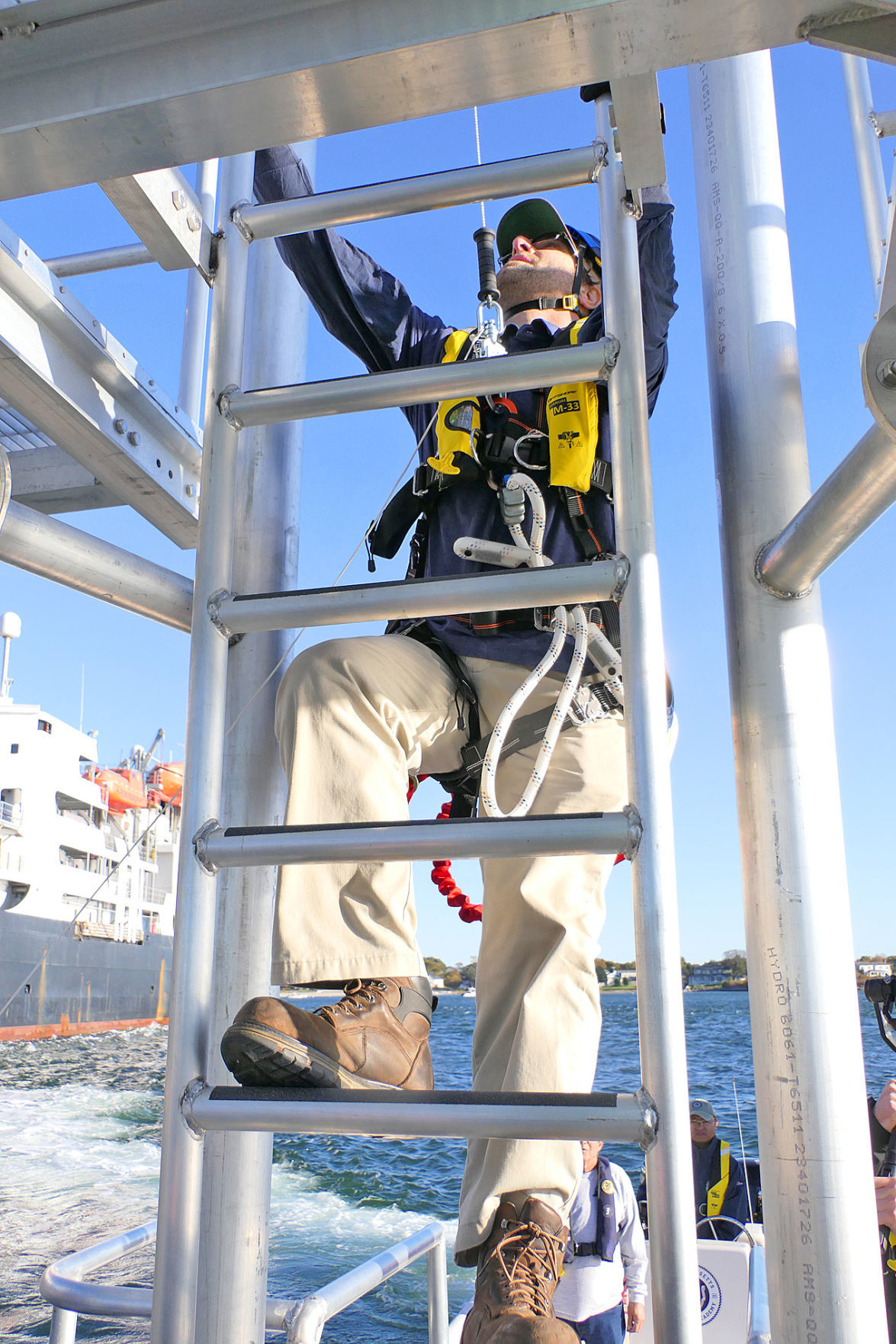 Training instructor James Redmond performs the maiden climb up the training tower. The tower allows students to get the feel for climbing onto a turbine platform from a boat at sea. 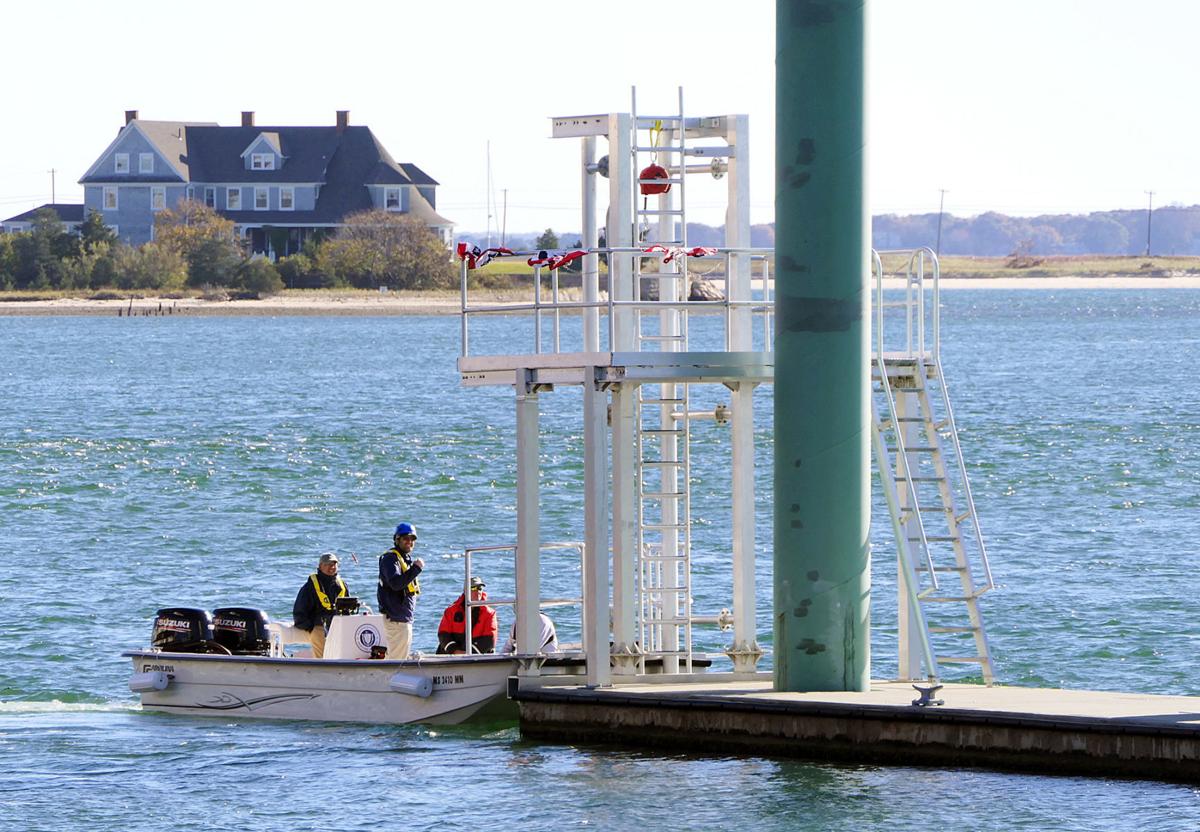 The training tower at the end of the pier will be used to train wind farm workers in transferring from a boat to the climbing tower. 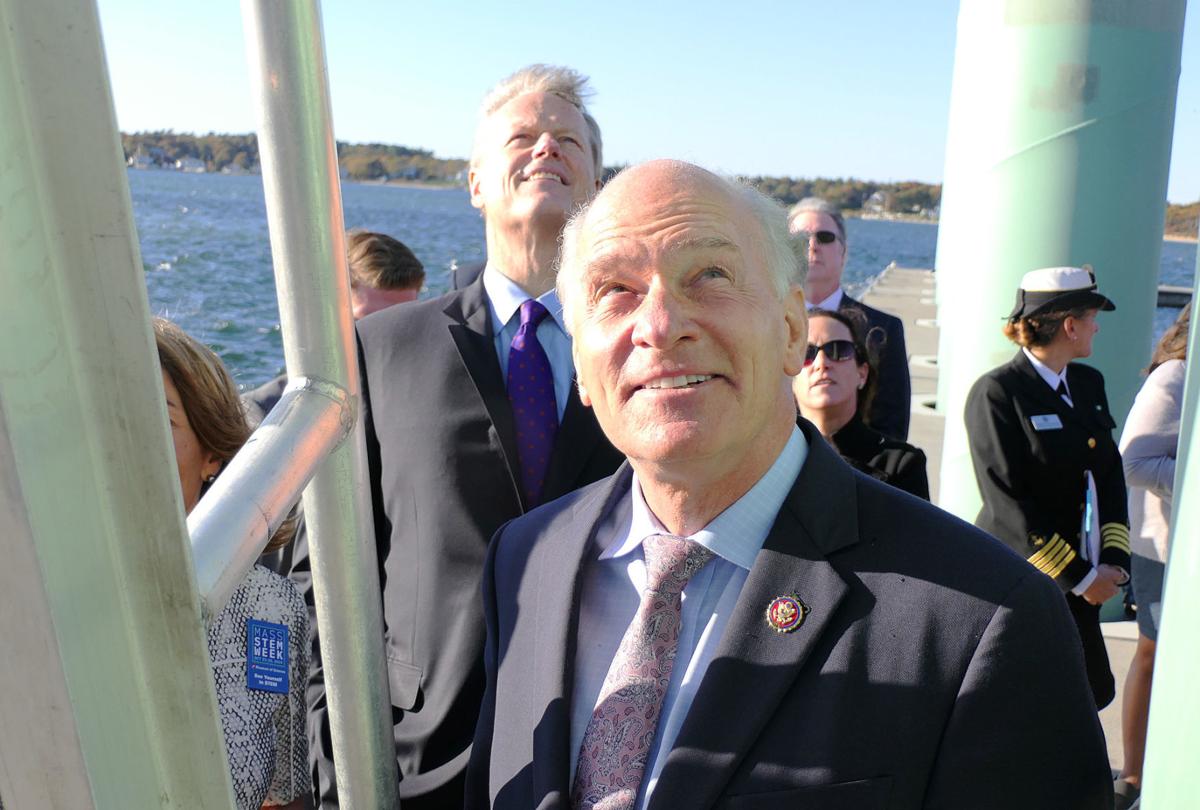 Training instructor James Redmond performs the maiden climb up the training tower. The tower allows students to get the feel for climbing onto a turbine platform from a boat at sea.

The training tower at the end of the pier will be used to train wind farm workers in transferring from a boat to the climbing tower.

Massachusetts Maritime Academy is pioneering a new training program that will be the first in the country to train workers entering the offshore wind industry.

The school’s director for maritime and professional training, Captain Michael R. Burns Jr., said the standards the program will be following are based on ones developed by the Global Wind Organization.

He said the course would run for six days and would cover five modules that are key to working on offshore wind facilities. Those modules are first aid, manual handling (how to handle turbine equipment manually and how to recognize symptoms of injury related to that work), fire awareness, working at heights and sea survival.

The training for working at heights will take place on the school’s newly constructed indoor climbing facility and the sea survival module training will occur on the Crew Transfer Training Facility at the end of the pier.

Capt. Burns said that those two training modules are the ones that required the most capital and energy investment and would not have been possible without the support of the Massachusetts Clean Energy Center.

“Initially, we will be focusing on Basic Safety Training for Offshore Wind,” Capt. Burns said. “Global Wind Organization’s version of basic safety training is very similar to the United States Coast Guard approved basic safety training that we currently offer and seemed to be the best place to get started in the field.”

The school has partnered with RelyOn Nutec, a Global Wind Organization training company based in Denmark, to train instructors and develop the program’s curriculum, Capt. Burns said.

In order to accommodate the instruction, a training tower that is similar to real offshore wind turbines was built at the end of the school’s pier at the end of August. Capt. Burns said the facility cost about $700,000 to build and that the cost was covered by grant money from the Massachusetts Clean Energy Center.

“This has covered the majority of costs, but several MMA employees have put dozens, if not hundreds, of hours into this project,” he said.

A ceremonial ribbon-cutting was held to inaugurate the program on Thursday, October 24. Governor Charles D. Baker Jr. was at the school to mark the occasion. He was joined by Lieutenant Governor Karyn Polito, secretariats of the commonwealth, and officials from the offshore wind industry.

Christopher Ryan, the school’s director of media and public relations, said the program is the first of its kind in the country.

Companies that have expressed an interest in the training so far are Vineyard Wind, MHI Vestas Offshore Wind, Orsted, Mayflower Wind, and Equinor, Capt. Burns said. He said that the Piledrivers Union and the Ironworkers Union have been interested, too.

The school will start training instructors for the course next month and expects to begin offering classes in December.

Capt. Burns said that two sessions of the course will be held each month and will initially be offered to workers who are involved in the construction, operation, and maintenance of wind farms. The companies sending the workers are expected to cover the cost of tuition.

Kudos to Self Reliance and executive director Megan Amsler for playing a key role in helping Mass Maritime to get this process started. If we can just get the current admin to allow offshore wind to proceed, we can all benefit.

Was the Town of Bourne represented or invited?