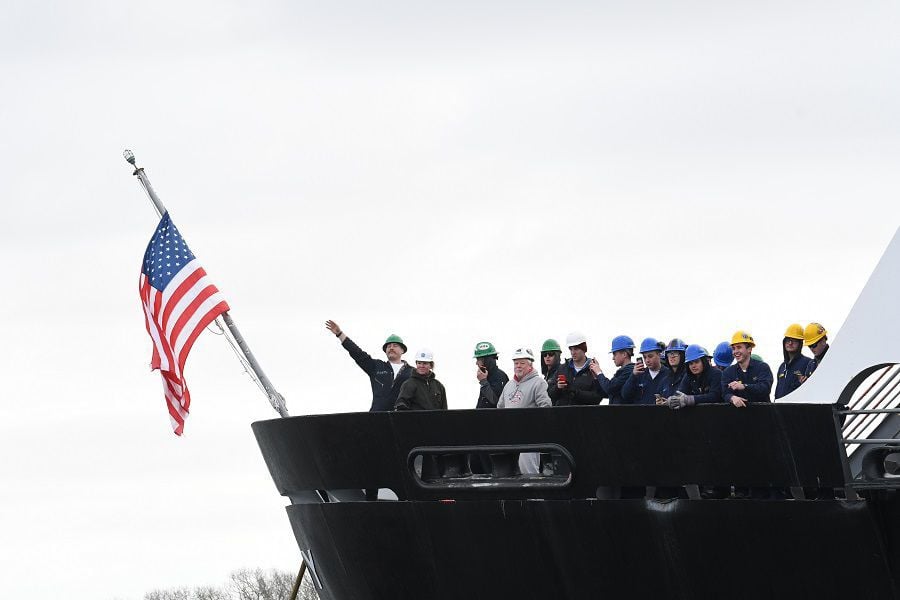 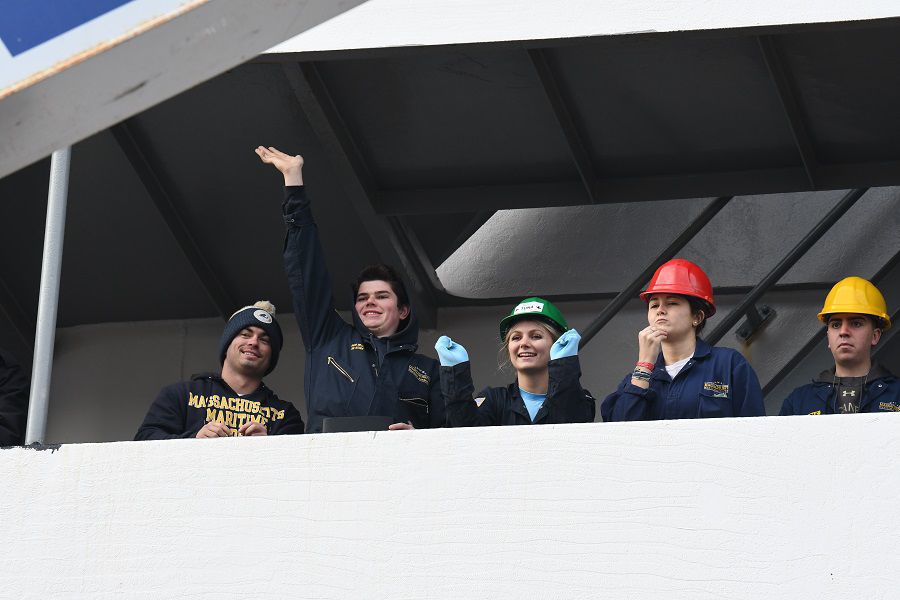 A Mass Maritime Academy cadet waves goodbye as the Kennedy get ready to head out on this year's sea term. 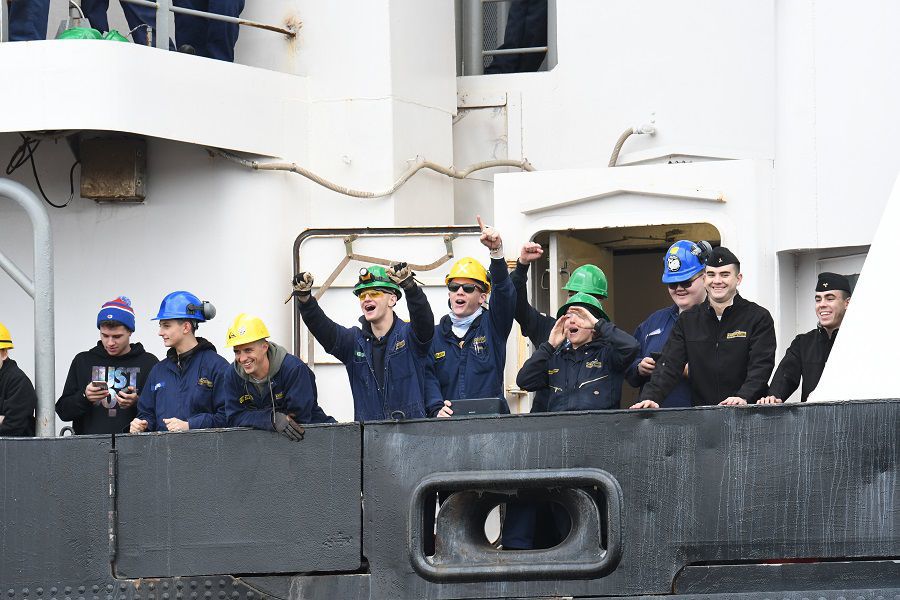 Mass Maritime Academy cadets get ready to head out on their sea term. 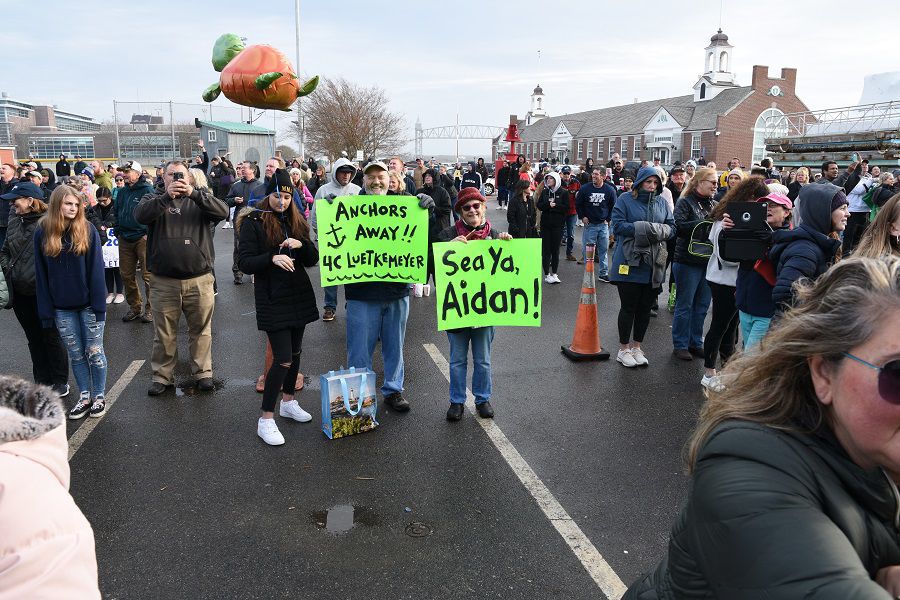 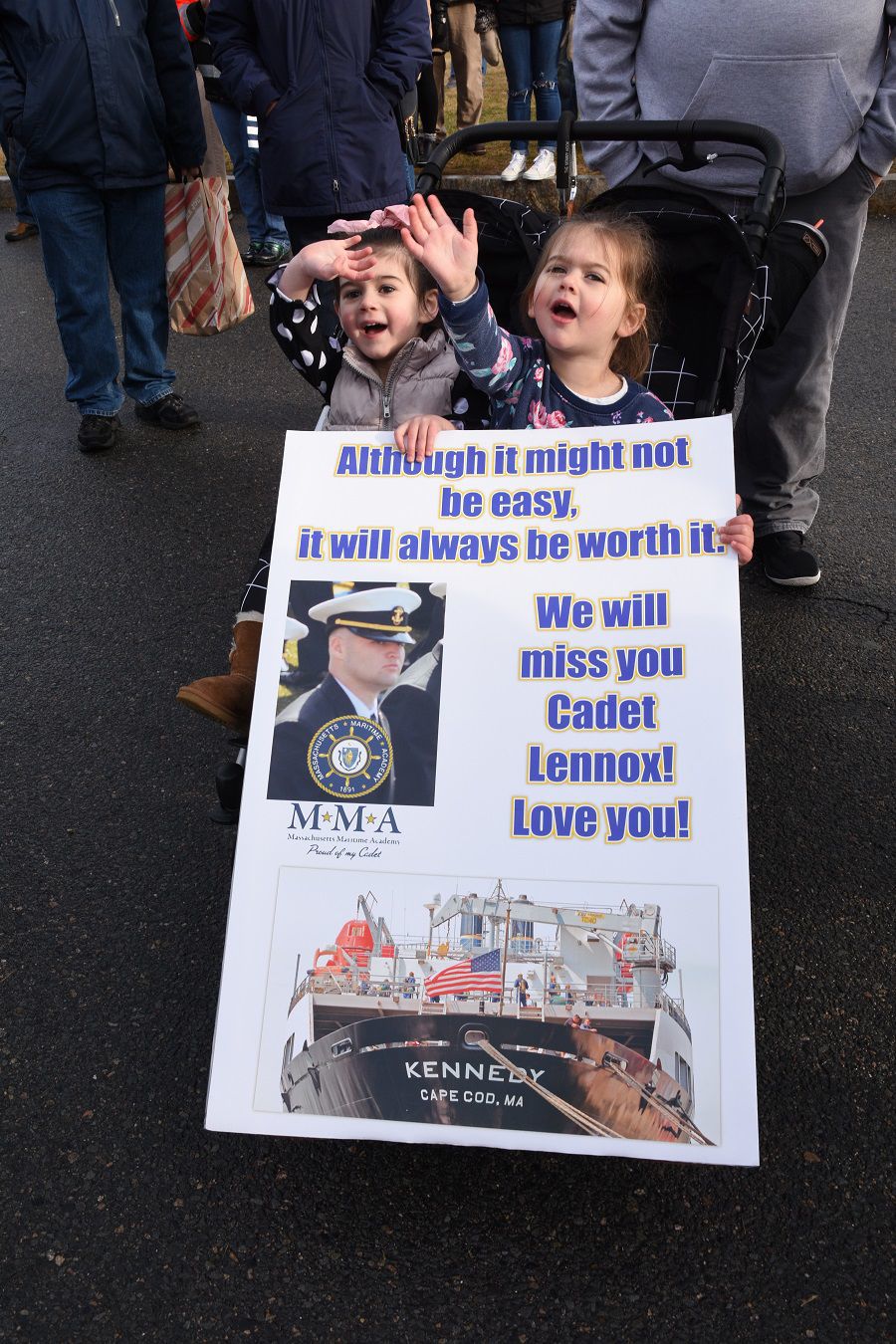 Giving a big wave to their uncle Chad Lennox, a 2019 Falmouth High School graduate, are Tenley Battles, 3, and her cousin, Delia Fuccillo, 3, from Falmouth. 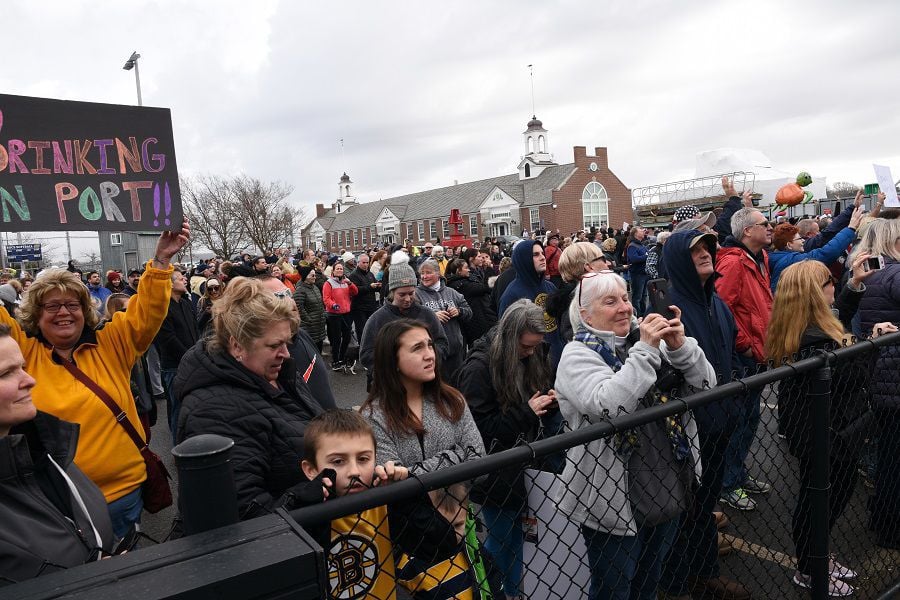 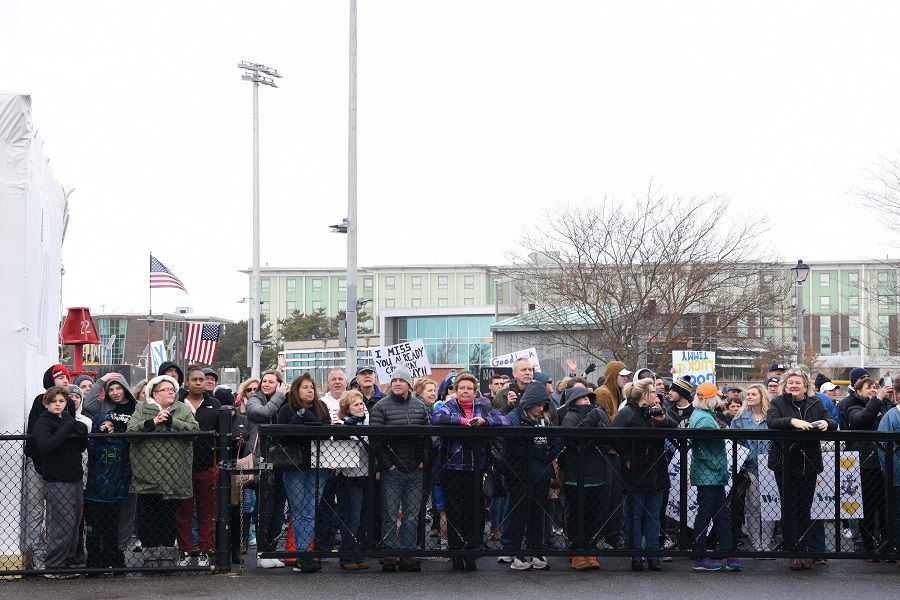 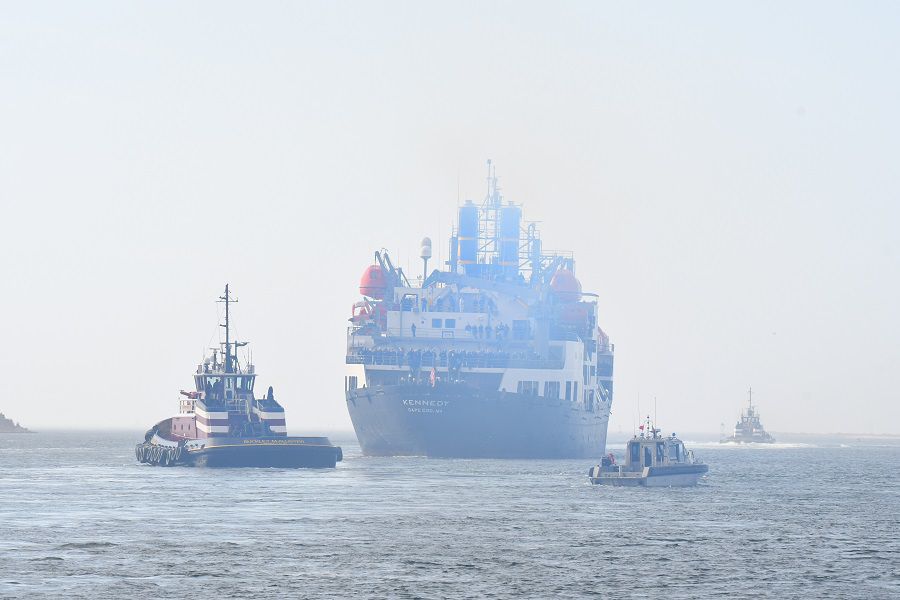 The Kennedy makes it way through the Cape Cod Canal as it departs on sea term. 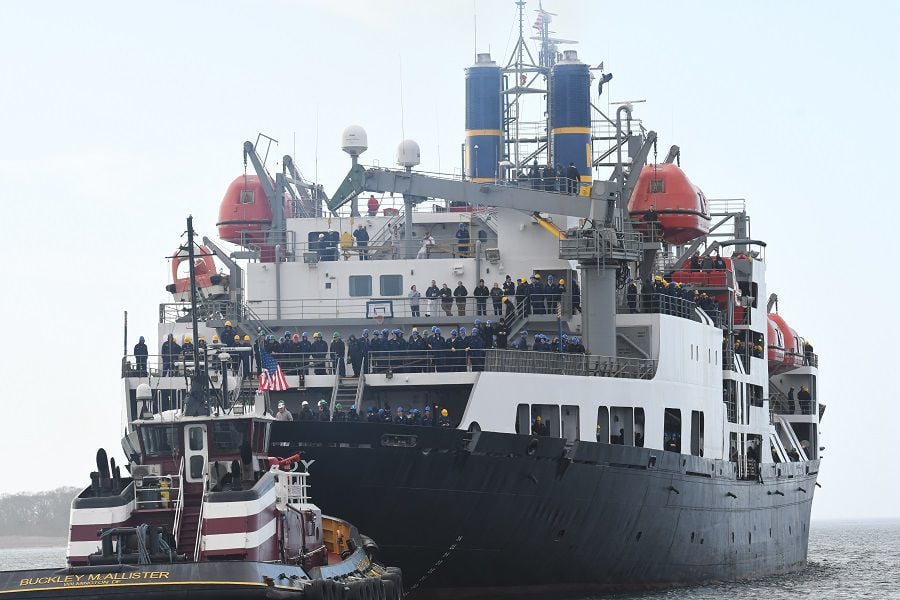 Cadets line the railings as the Kennedy leaves the pier. 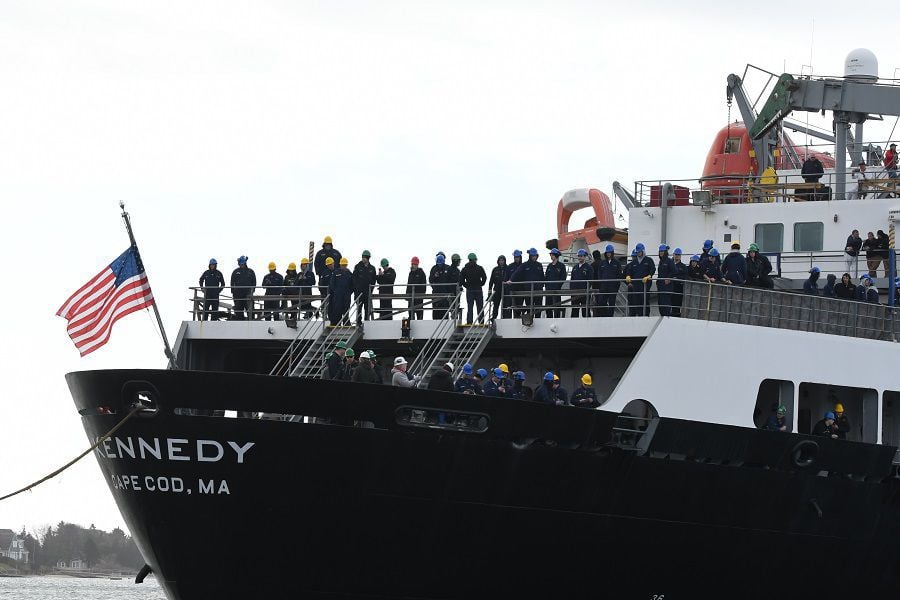 Cadets line the railings as the Kennedy departs.

Cadets have spent the past week preparing the academy’s training ship, the TS Kennedy, for the journey by making sure the vessel is clean and stocked. On Saturday morning, they lined the decks to wave goodbye to the people standing on the docks.

By 9:20 AM, all of the parking spaces leading up to the dock were full as families from all over the country came to the campus to watch their cadets sail off.

For the Kohler family, from Tuckerton, New Jersey, watching sophomore David Kohler head out was an emotional experience.

Ms. Kohler said that her husband and her son’s grandfather are both ship captains themselves, so he is following in the footsteps of his family members.

The couple were at the dock with their daughter, Emma Kohler.

Gerry Voege of Andover was there to watch his grandson Sager Florio set sail. He graduated in 1960 from the United States Merchant Marine Academy in Kings Point, New York. He did a similar journey himself 65 years ago, he said.

Mr. Voege said that it was neat seeing his grandson off, in part because of the ship’s history. The Kennedy was originally known as the Velma Lykes, and Mr. Voege once sailed on the Norman Lykes.

Also at the dock for Mr. Florio were his parents, Maryellen and Mark Florio, his grandmother Josephine Voege, and his girlfriend, Addie Baldwin, a student at Andover High School.

The family carried cardboard cutouts of Mr. Florio’s face to see him off.

As the clock ticked nearer to the scheduled departure time of 9:40 AM, cheers rose from the deck of the ship. A group of students also performed a rousing rendition of Lynyrd Skynyrd’s “Sweet Home Alabama.”

At 9:40 AM, the ship’s horn blew, signaling that the ship would be leaving the dock. More cheers arose from the ship as it slowly made its way into the Cape Cod Canal. A few minutes later, the voyage was officially underway.

After the ship pulled away the family of senior Leo Munafo and freshman Matthew Munafo of Wrentham remained on the dock. Their father, Ron Munafo, said that this was not their first time waving their children off and that the boys’ elder brother has gone on the voyage before.

Walking along Academy Drive to her car, Gay Perkoski talked about how her son, sophomore Nathan Barboza of Attleboro, had grown anxious to depart over the past week. She said that her son was nervous, but excited to go.

“It’s his first time away,” she said. “He’s been home every weekend that he can.”

The cadets will be traveling through the Panama Canal and across the equator. Cadets crossing the line for the first time will be taking part in a Shellback Ceremony—a traditional initiation ritual.

As of Tuesday, January 14, the ship was off the coast of Puerto Rico. The ship’s captain, Michael Campbell, said that they were practicing anchoring drills. He said that the weather where they are is expected to be sunny and in the mid-80s.

The captain, as well as cadets and the ship’s mascot, a stuffed green monster named Little Buc, are keeping journals online throughout the trip. The content of the blogs is wide-ranging from updates on their location, and what they are learning, to historical information about the school and the ship.

A blog by Little Buc on Wednesday, January 15, talked about the Great Molasses Flood that happened in Boston’s North End on the same date in 1919. In the blog, Little Buc says that at the time of the flood, the Massachusetts Maritime Academy was known as the Massachusetts Nautical School and that the entirety of the school was housed in a training ship docked at the North End Pier.

When the flood happened, there were 116 cadets on the ship and they did not hesitate to jump into action when they heard the molasses tank explode. The cadets were able to prevent onlookers from getting close to the disaster, to recover six victims, and pull 20 wounded people from the molasses.

As an addition this year, in recognition of the 400th anniversary of the landing of the Mayflower, a Pilgrim doll named Giles Hopkins will be sailing and blogging, as well.

The real Giles Hopkins was a child passenger on the Mayflower in 1620 and the son of Stephen Hopkins, assistant to the governor of Plymouth Colony.

All of Giles’ blog entries will be vetted for historical accuracy by the Plimoth Plantation’s director of special projects and strategic partnerships, Kate LaPrad.

The cadets will also be stopping in Balboa, Panama; Golfito, Costa Rica; Willemstad, Curaçao; and Tampa, Florida, during the seven-week voyage.

People are able to follow along with their travels by going to followthevoyage.org.

For safety and security reasons, the exact location of the ship is not available at any given time.

Living In 'Interesting Times?' Journal About Them

Storytellers Sought For 'Listen To Your Mother'