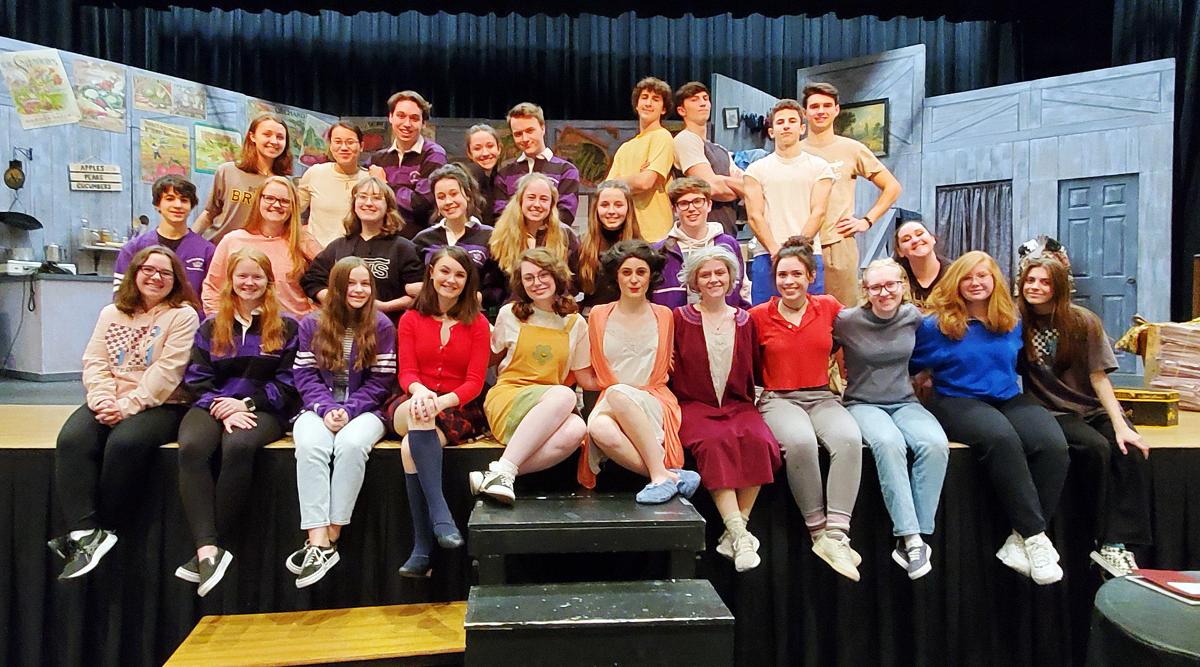 The cast and crew for Bourne High School’s festival theater team. The team will be performing “The Effect of Gamma Rays on Man-in-the-Moon-Marigolds” at the Massachusetts Educational Theater Guild’s High School Theater Festival. 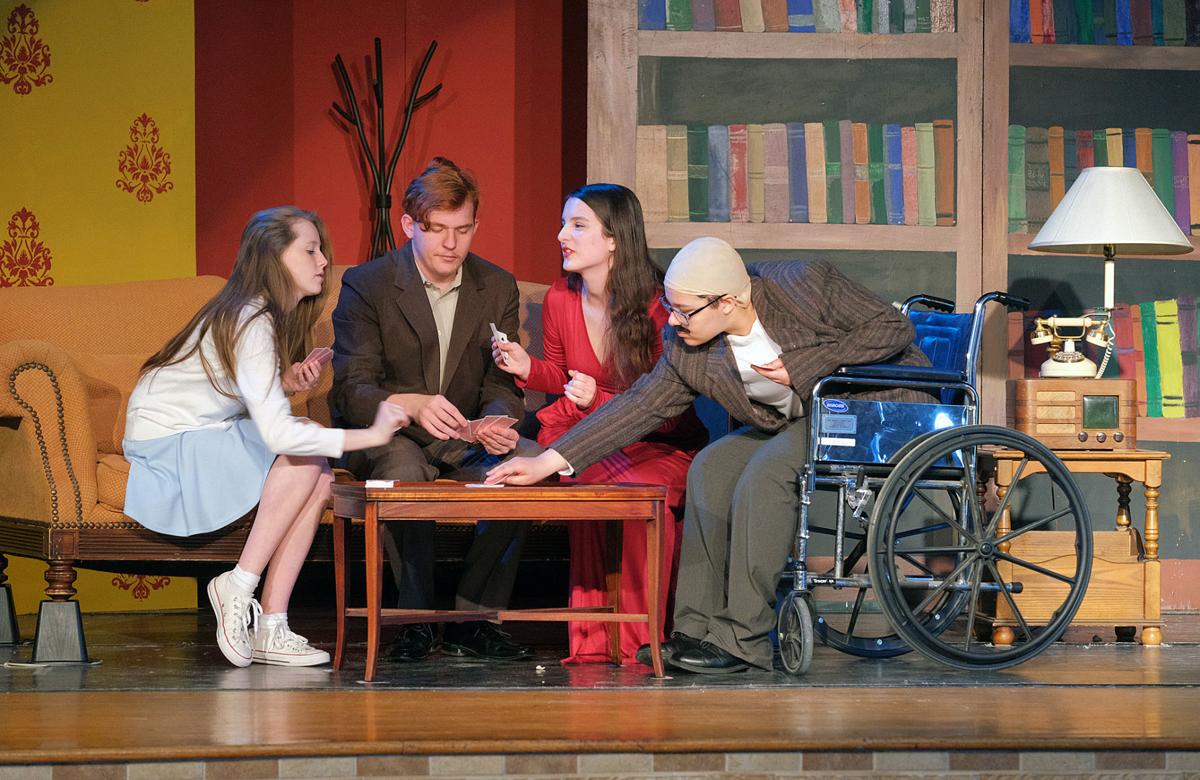 Emily Mello as Felicity, Tyler Brown as Simon, Allison Kaipainen as Cynthia and Issac Smith as Magnus rehearse for Upper Cape Tech’s performance of the comedy, “The Real Inspector Hound.”

The cast and crew for Bourne High School’s festival theater team. The team will be performing “The Effect of Gamma Rays on Man-in-the-Moon-Marigolds” at the Massachusetts Educational Theater Guild’s High School Theater Festival.

Emily Mello as Felicity, Tyler Brown as Simon, Allison Kaipainen as Cynthia and Issac Smith as Magnus rehearse for Upper Cape Tech’s performance of the comedy, “The Real Inspector Hound.”

Two Upper Cape schools are preparing to compete in this weekend’s Massachusetts Educational Theater Guild’s High School Theater Festival, which will be hosted by 14 schools across the state on Saturday, February 29.

Bourne High School will host six of the 104 competing schools starting at 9 AM.

From the preliminary round, three teams from each competition will be selected to compete at the next level. The semifinal round will take place on March 14 and state finals will be held from March 26 to March 28.

This will be UCT's Canalside Players' fourth year participating in the event.

Each year, senior Allison Kaipainen of Wareham said, the team gets better.

"I feel like every year we add something new," she said.

Allison plays Cynthia, the supposed widow of the manor in which the farcical show takes place. "The Real Inspector Hound," by Tom Stoppard, is a parody on murder mysteries in the vein of Agatha Christie.

Her twin sister, Amanda Kaipainen, plays the maid who is always walking in on other characters threatening to kill each other.

"This has been a real bonding experience for all of us," she said, noting that the cast and crew shared a number of emotional issues throughout the rehearsal period, which served to bring them all closer together.

Sophomore Tyler Brown of Buzzards Bay said that the experience has strengthened the connections he already had with his friends.

"This has been a great opportunity for me," he said. "It's just a blast."

Tyler plays Simon, a womanizing cad whom everyone seems to have motive to kill.

Senior Catherine Burroughs of Sandwich plays the role of the title character, Inspector Hound, who attempts to solve the murder—which may or may not have happened yet. She said that this is her first time competing in the festival.

"I'm honestly sorry that I didn't do it sooner," she said.

Joey said that this is his third show with the players, although his first in a comedic role.

"I usually prefer serious roles," he said. "Taking on a comedy show is out of my element."

Morgan said that this is her first festival show and that watching the set and costumes come together, as well as the bonding experience among the cast, has been wonderful.

Director Samantha McMahon said that she has helped to foster the relationships between the students by having them participate in trust exercises. She also had them work on their improvisation skills.

The cast rehearsed over February vacation week and one of the exercises Ms. McMahon had them do was to write short letters of support to each other.

"After we did that, I saw a big change in how proud they were of the work they've been doing," she said.

Ms. McMahon also gave a shout-out to Joey Ferro, who was unable to attend rehearsals in person during vacation week due to being sick with the flu. Even though he was too ill to attend, he still phoned in to recite his lines over a speaker phone.

This year it is presenting Paul Zindel's play revolving around the dysfunctional lives of single mother Beatrice and her daughters, Tillie and Ruth. The title of the play refers to Tillie's science fair project, which she completes despite her mother's constant efforts to hinder her progress.

Bourne's set is elaborate, featuring staircases, multiple prop pieces, and highly detailed paintings. Even though there is a lot to set up, the crew manages to put it all together in about three minutes under the direction of stage manager Joey Morisset, a senior.

Erin Hennessey, a senior, plays Tillie. Erin has also been involved with the school's non-festival productions and said that this is a unique experience as an actor.

"We really get to deep-dive into each character," she said, compared to the musical productions where they get less time to get to know the characters they are playing.

Junior Cassidy Fader plays the older sister, Ruth. This is her first time being involved with the festival as an actor. She said that performing in the musical productions is second nature for her and that the festival has been a stressful experience, [but] in a good way.

"This is an amazing experience," she said. "It's a lot of hard work. I'm proud of the work we do."

Playing the girls' mother is junior Gracie Healey. Gracie was the artistic director for last year's festival and this is her first year participating as an actor. The fact that the show has come together as well as it has is the direct result of all of the effort that they have all put into it, she said.

They have been working on the show for nearly the entire winter, and she said that it has absolutely been a community effort.

"Everyone will say that you come out of it with a sense of accomplishment," she said. "We go in as a team and we go out as a team."

Both schools will be competing at Bourne High School on Saturday, February 29. The Canalside Players are scheduled to start at 10 AM and Bourne High School will perform at 2 PM. Tickets to the festival can be purchased at the door and cost $15 to see all of the performances for that day.