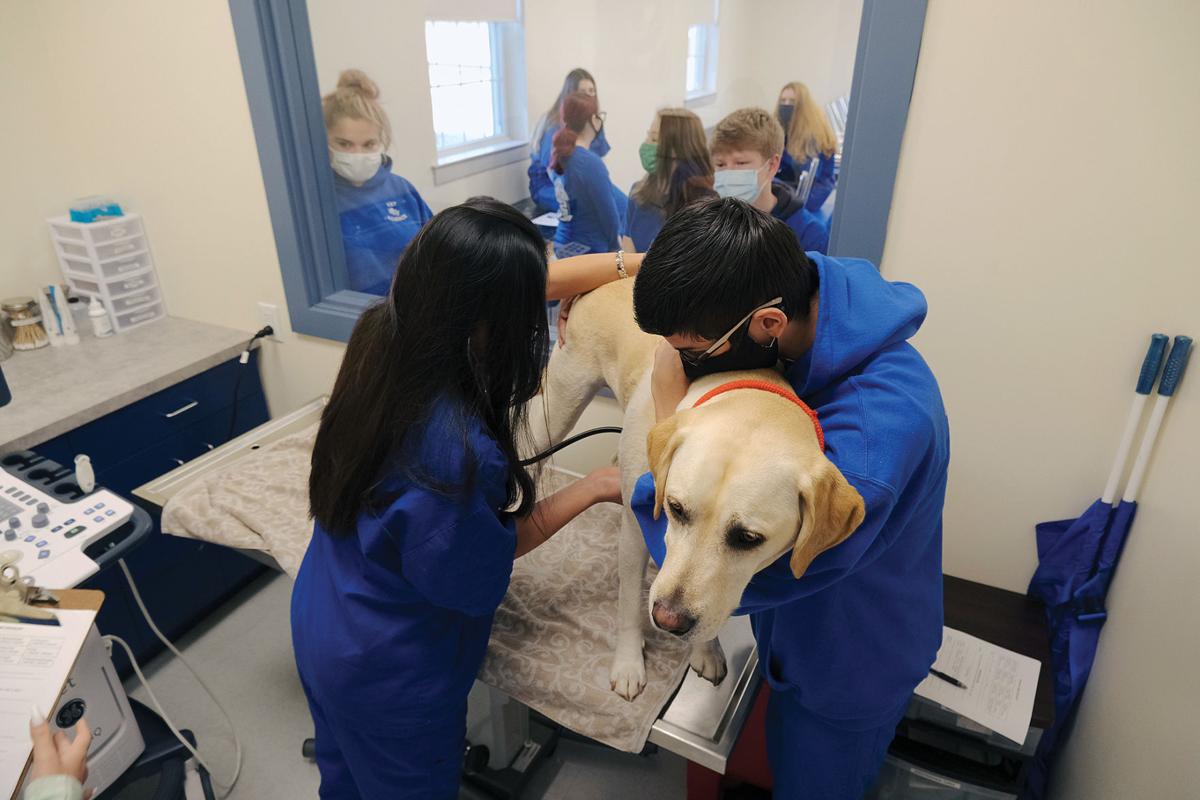 Upper Cape Tech sophomore Aidan Perez holds onto Labrador retriever Revis, while sophomore Meredith Connor listens to his chest with a stethoscope. Revis is a regular fixture in the classroom and belongs to veterinarian science instructor Elise McAllister. 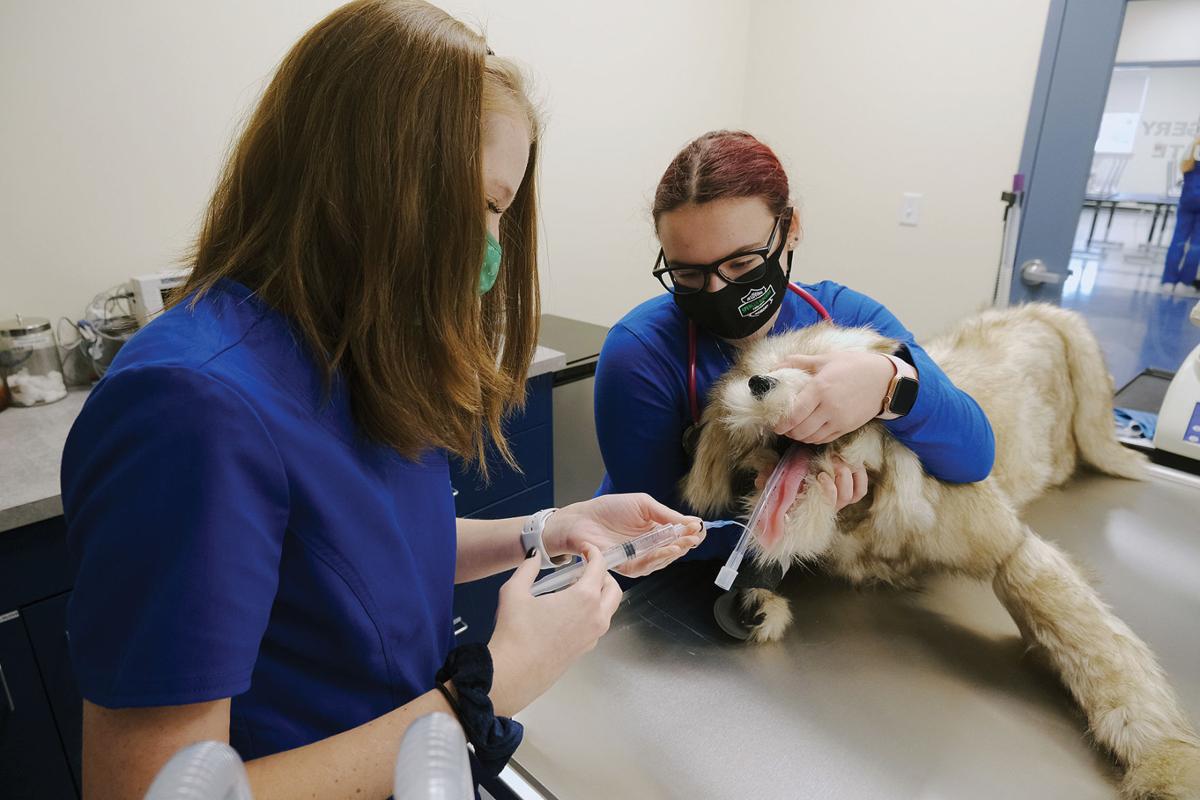 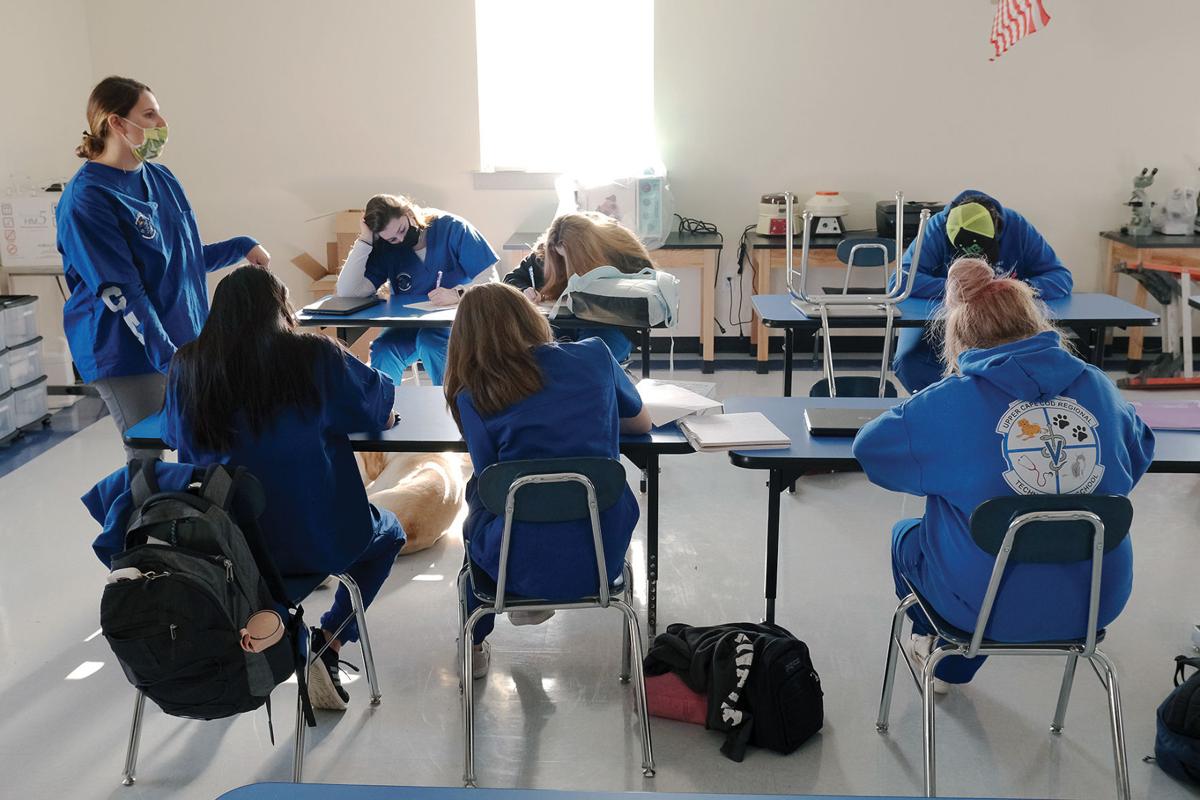 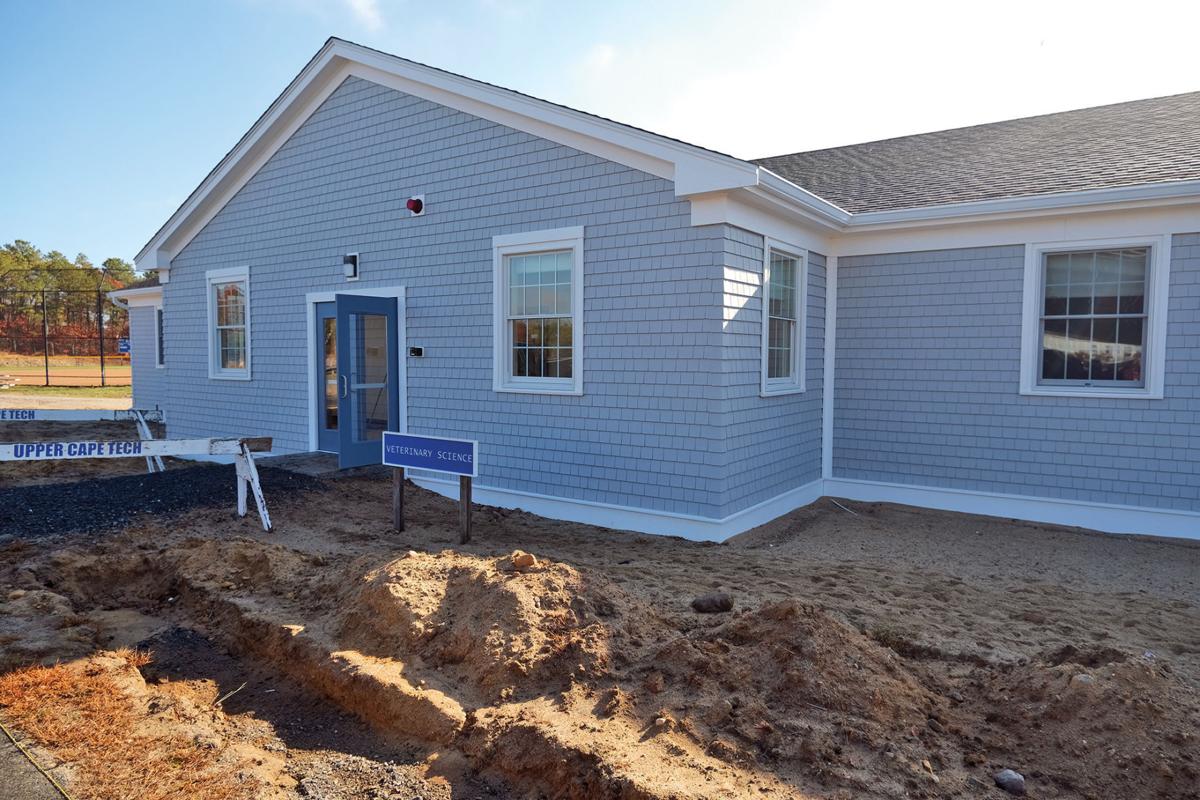 Upper Cape Tech sophomore Aidan Perez holds onto Labrador retriever Revis, while sophomore Meredith Connor listens to his chest with a stethoscope. Revis is a regular fixture in the classroom and belongs to veterinarian science instructor Elise McAllister.

In most high schools it might be unusual to find a classroom of sophomores performing an ultrasound on a dog’s bladder, but Upper Cape Cod Regional Technical High School is not most high schools.

The finishing touches are just about done on the school’s new veterinary science building, but the first class of students to be enrolled in the program is already making use of everything the facility offers. The program was included as an exploratory class last year, when it was housed in an existing lab space in the main building.

Now a full-blown program with its own new building, the 14 veterinary science students are starting to get hands-on experience working with sick and injured pets.

Technical Programs Supervisor Nolan LeRoy said that earlier in the year, a student conducting an eye examination on a dog found a benign tumor that had previously gone unnoticed.

Elise McAllister, the classroom aide, brings her yellow Labrador retriever, named Revis, in so that the students can practice exams on him.

Ms. McAllister said that she trained him as a therapy dog when he was about a year old. Revis is definitely used to his routine and follows the direction of the students when they need him to be in any given place.

Teacher and veterinarian Harry Ernst said other school staff members have also brought their pets in for the students to examine.

The new building contains two classroom spaces. It also provides exam, dental and surgical rooms. Each of the clinical rooms includes a large observation window so that students who are not taking part in a procedure can still watch what their peers are doing.

Among the students this year is Jacquelyn Stuart of Wareham, who said she plans to become a veterinary technician with a specialty in physical therapy. She said she has know that she wanted to work with animals since she was 8 years old, especially having grown up around a lot of animals.

Her classmate, Emily Mello of Bourne, said she wants to be a veterinarian at Walt Disney World’s Animal Kingdom before potentially opening up a clinic of her own.

“It’s so amazing and an honor,” Emily said. “To be the first class to be in veterinary is amazing.”

Both said that the course work is rigorous, but no more so than what they had expected it to be when they signed up for it.

“If you think you’re going to come in and play with dogs all day, you’re wrong,” Jacquelyn said after she and Emily had completed a demonstration of an endotracheal intubation on a surgical dummy named Jerry Seinfeld.

The program will not certify students to become veterinary technicians right out of high school, but Mr. LeRoy said that they will be earning hours toward that certification. Mr. LeRoy said students will be certified in animal CPR. They will also be Fear Free certified. Fear Free is initiative that aims to educate those who care for animals on how to reduce fear and anxiety in pets.

Dr. Ernst said the students coming out of the program will be well-prepared to enter the workforce in a veterinary field, as well as to pursue higher education in the field. Regardless of which path they choose, he said, the students will be hirable as soon as they graduate.

“This is the real deal,” he said. “These kids will be so well-trained and qualified.”