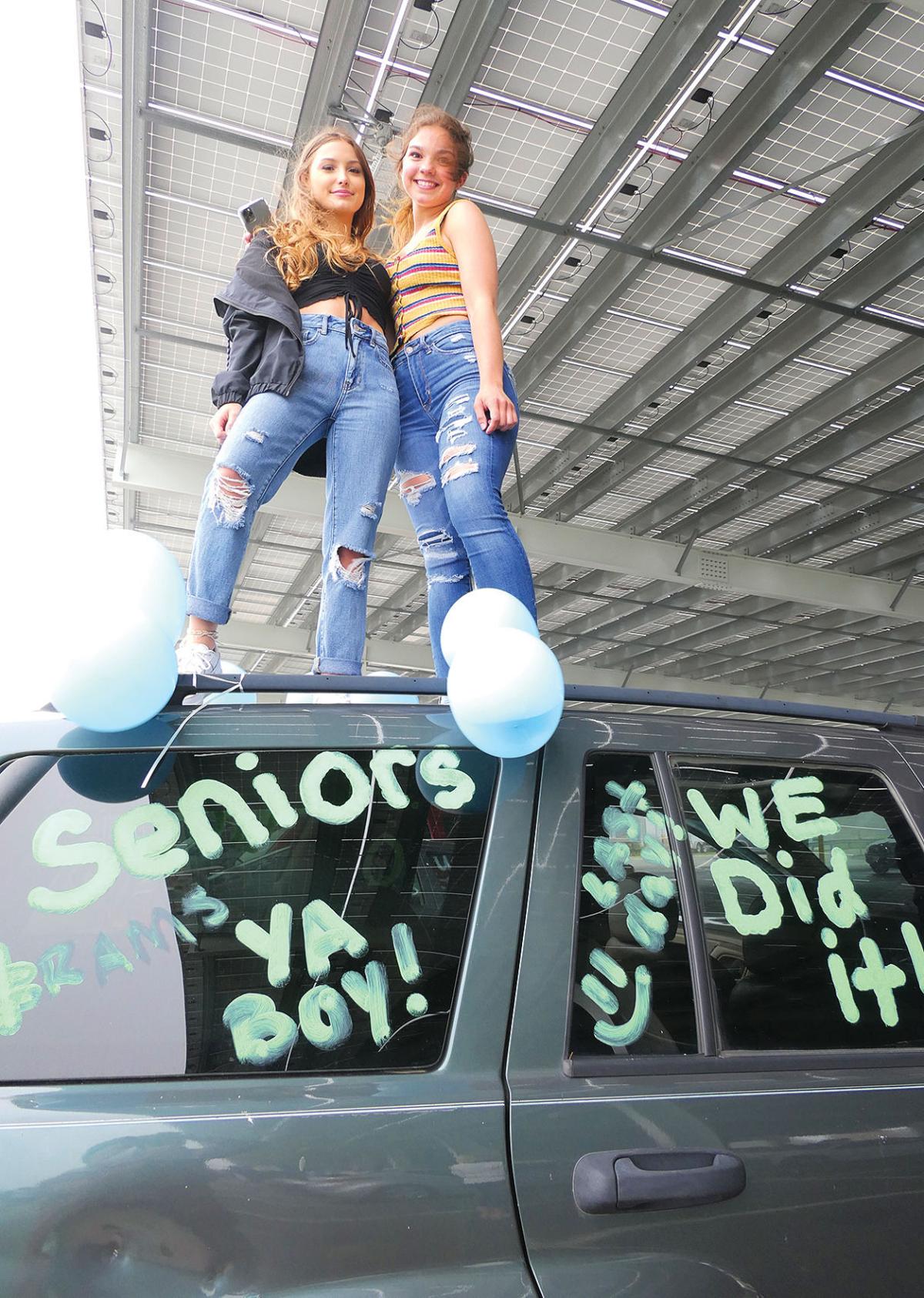 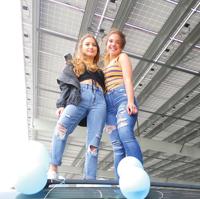 Upper Cape Tech students Remy Nelson and Danielle Casper stand atop a vehicle decorated for a gathering for the final bell of the seniors’ high school years at the school last Friday afternoon. 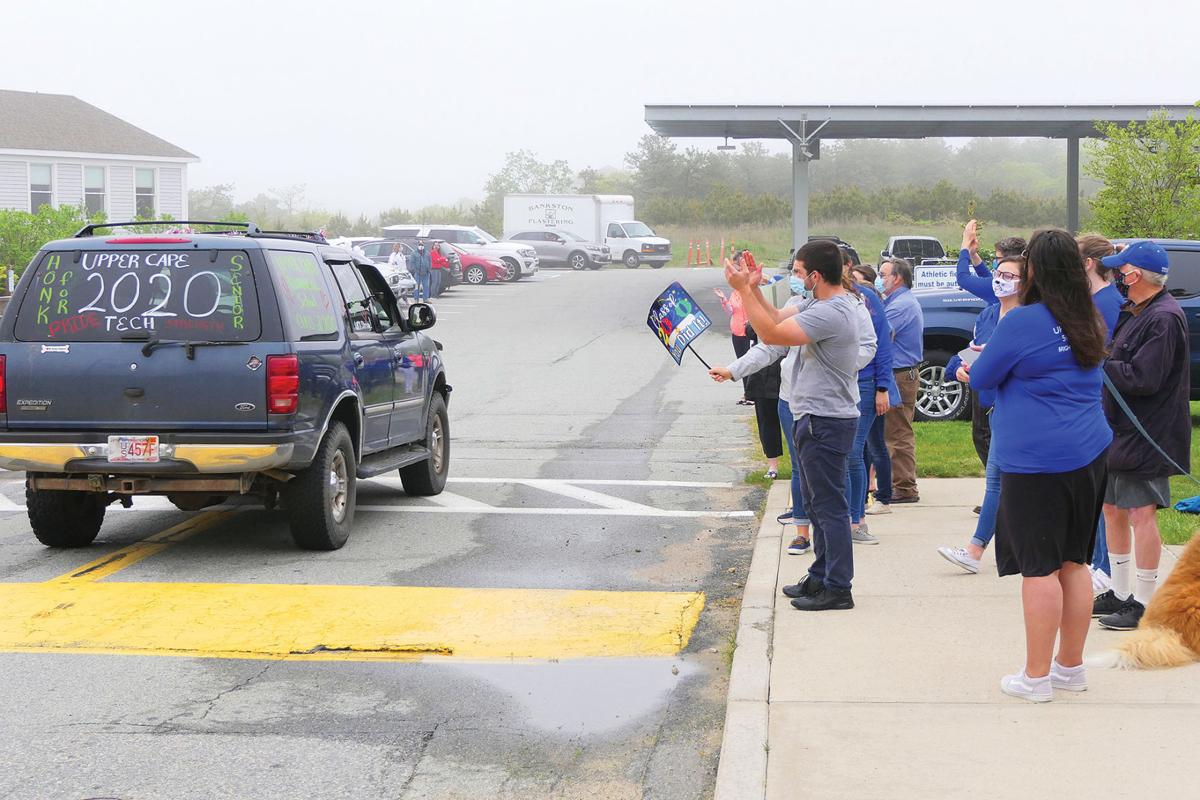 Upper Cape Tech staff applaud the students as they parade through the school’s parking lot in their decorated vehicles. 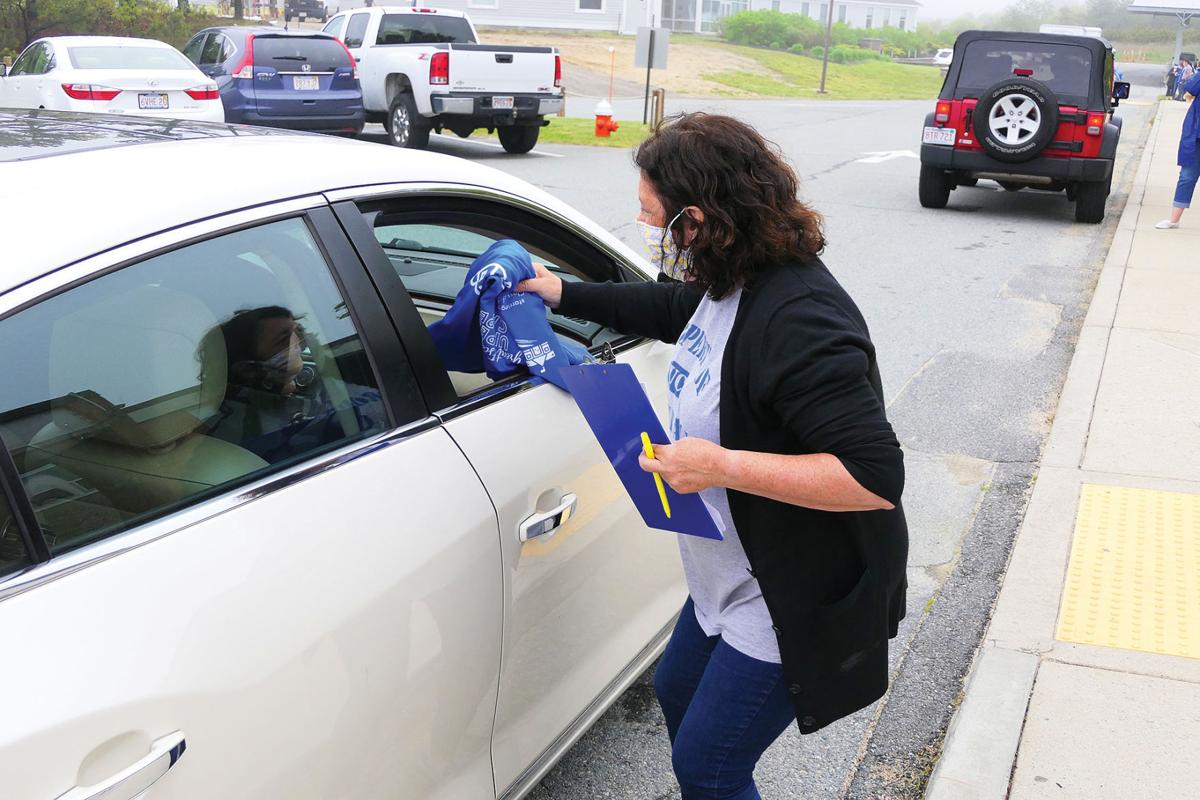 Kathy Burgess, administrative assistant to the principal, hands out tee-shirts to seniors as they arrive. 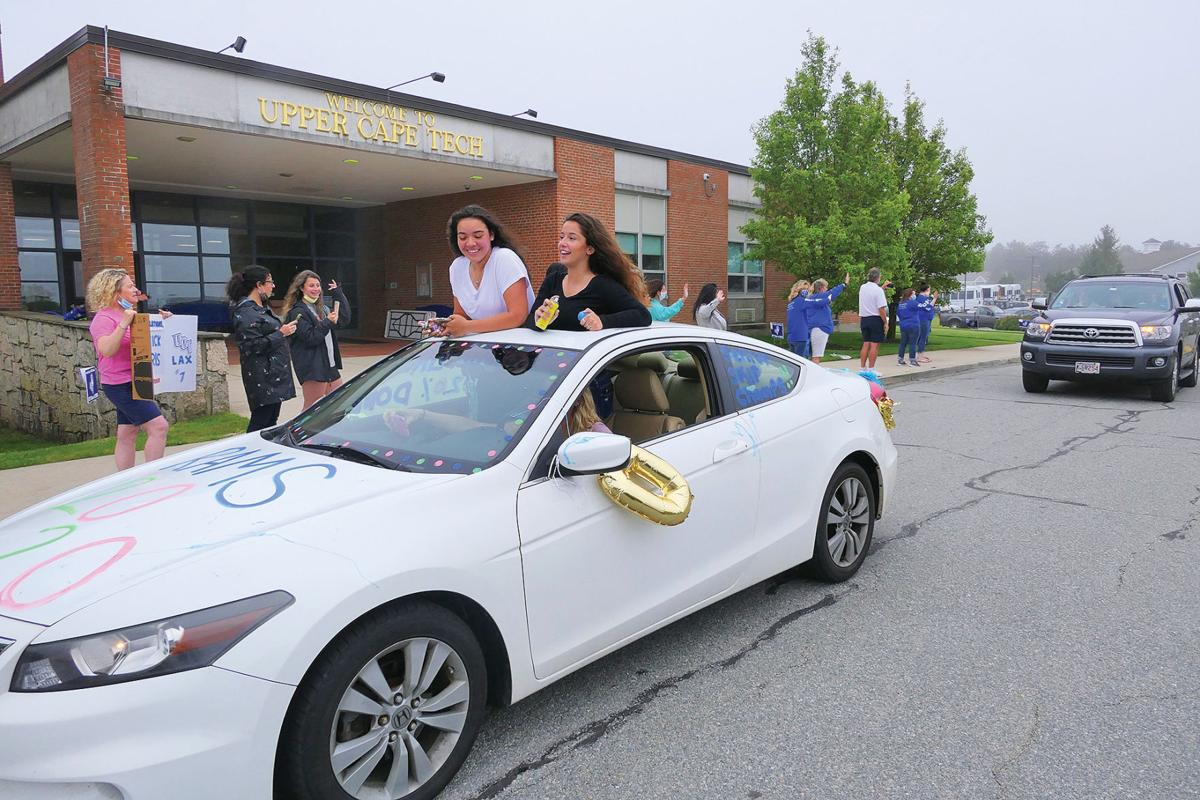 Upper Cape Tech seniors gathered at the school last Friday afternoon for the final bell. The students paraded around the building in their decorated cars.

Upper Cape Tech students Remy Nelson and Danielle Casper stand atop a vehicle decorated for a gathering for the final bell of the seniors’ high school years at the school last Friday afternoon.

Upper Cape Tech staff applaud the students as they parade through the school’s parking lot in their decorated vehicles.

Kathy Burgess, administrative assistant to the principal, hands out tee-shirts to seniors as they arrive.

Upper Cape Tech seniors gathered at the school last Friday afternoon for the final bell. The students paraded around the building in their decorated cars.

While students have not been able to attend classes at the Upper Cape Cod Regional Technical High School in Bourne since the middle of March, the Class of 2020 still gathered on campus last Friday afternoon, May 29, to hear their last ever final school bell.

School Principal and future superintendent Roger Forget said the senior class was invited to decorate its cars and come to campus one last time on Friday afternoon. By 1:25 PM, a backup of cars had started to form in the school’s driveway as the seniors and their families arrived.

Mr. Forget said the school bought T-shirts for every member of the class that say “Great Escape from Upper Cape.” As the students arrived, each one was handed a shirt.

The students then gathered in the parking lot next to the main school building underneath the solar canopy.

Some cars were decorated with balloons and “Class of 2020” signs, others with the names of the colleges that they would be attending in the fall. One car stated in capital letters that “COVID SUCKS.”

Shortly before the bell would have rung on a normal day, 2:10 PM, Mr. Forget spoke to the seniors to a cacophony of whoops and car horns.

“Let’s hear you make some noise that you are back on campus!” he said. “We have missed you.”

He let them know that, for the 170 soon-to-be graduates, getting to this point was no easy task and acknowledged that as a class they have been through a lot.

Additionally, he announced that any school issued-iPads were now theirs to keep as a gift from the school. This announcement was particularly well-received, garnering more cheers and car horns.

Retiring Superintendent Dutch spoke briefly, saying that he has learned that if a person is slated to speak before people eat or before people leave, brevity is best. He said that the seniors have certainly been missed in the building and joked that it took him eight years to graduate from Upper Cape Tech compared to their four years.

Mr. Forget then said that when the bell was rung the seniors would follow the school security officer behind the school, becoming the first students to drive along a newly paved roadway behind the school. They then made their way to the front of the building, driving around the rotary in front of the school and then leaving the campus for the day.

As the students started to drive away, Mr. Forget told them that he looked forward to seeing them on graduation day, scheduled for August 2.

“Please be safe over the summer,” he said. “I want to see all of you at graduation.”