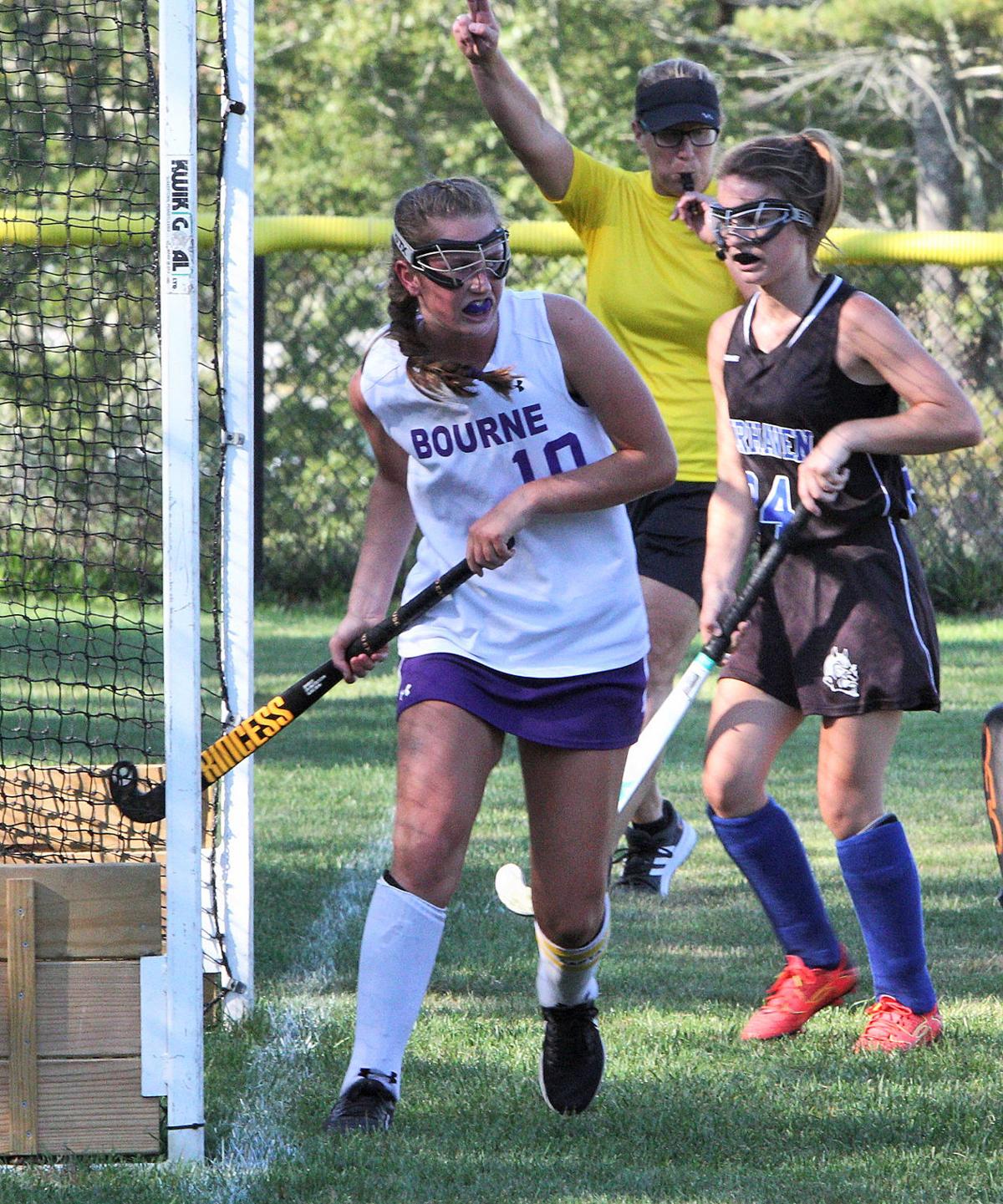 Forward Carly LaCasse was a go-to offensive player for the Bourne High field hockey team during her time in the purple and white. 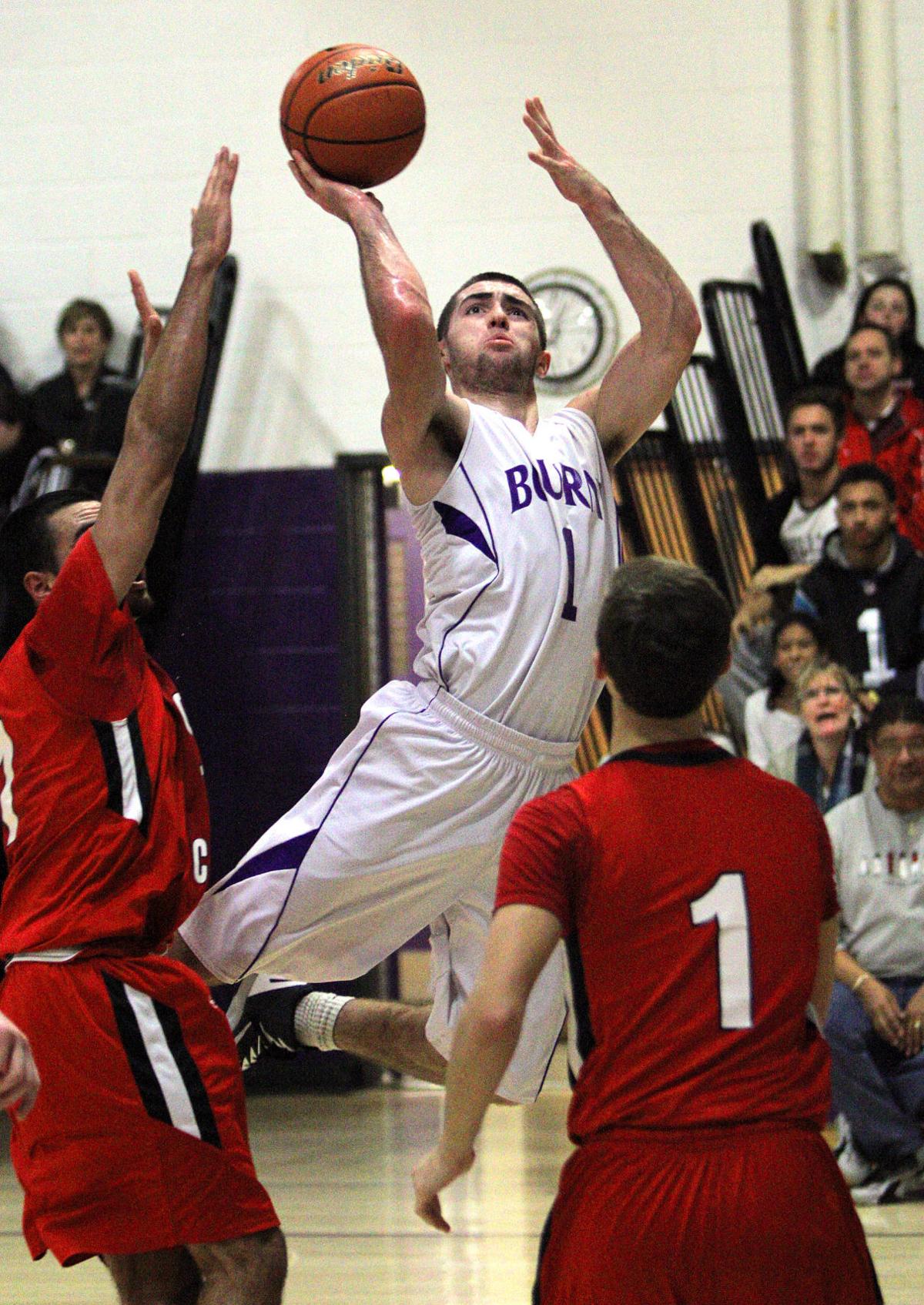 Jacob Ashworth takes one to the net in Monday’s basketball game with Old Rochester. Ashworth led the scoring for Bourne with 31 points. The Canalmen fell short 77-63. 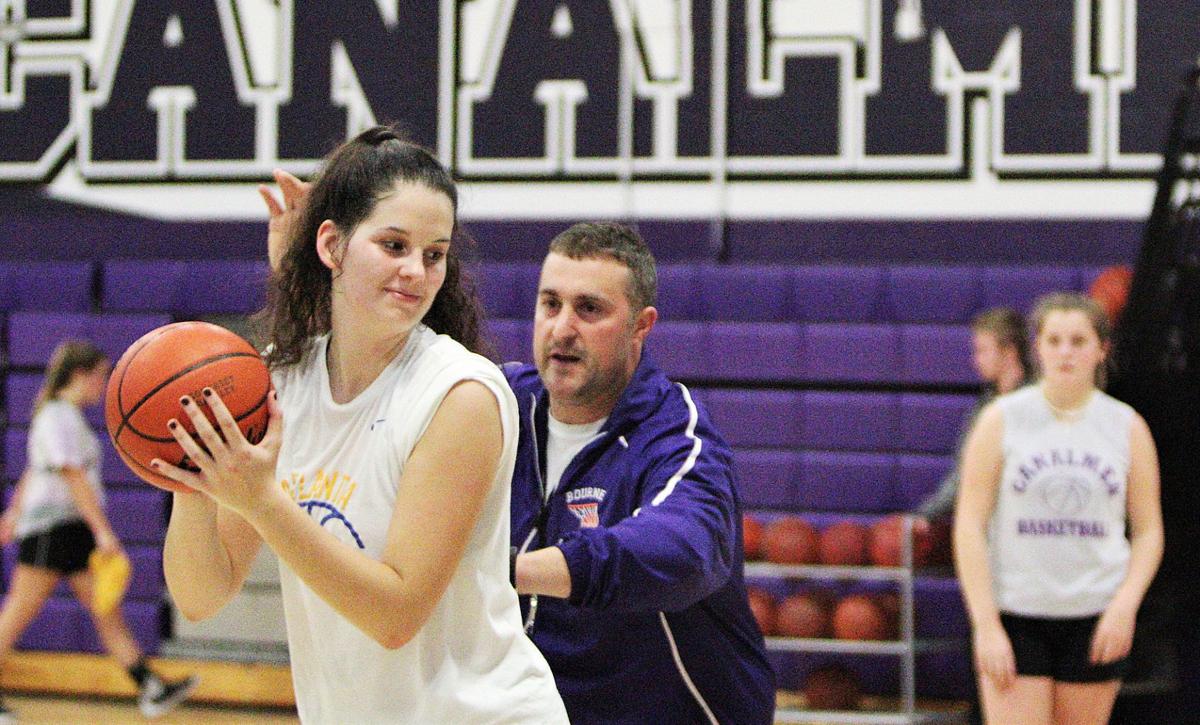 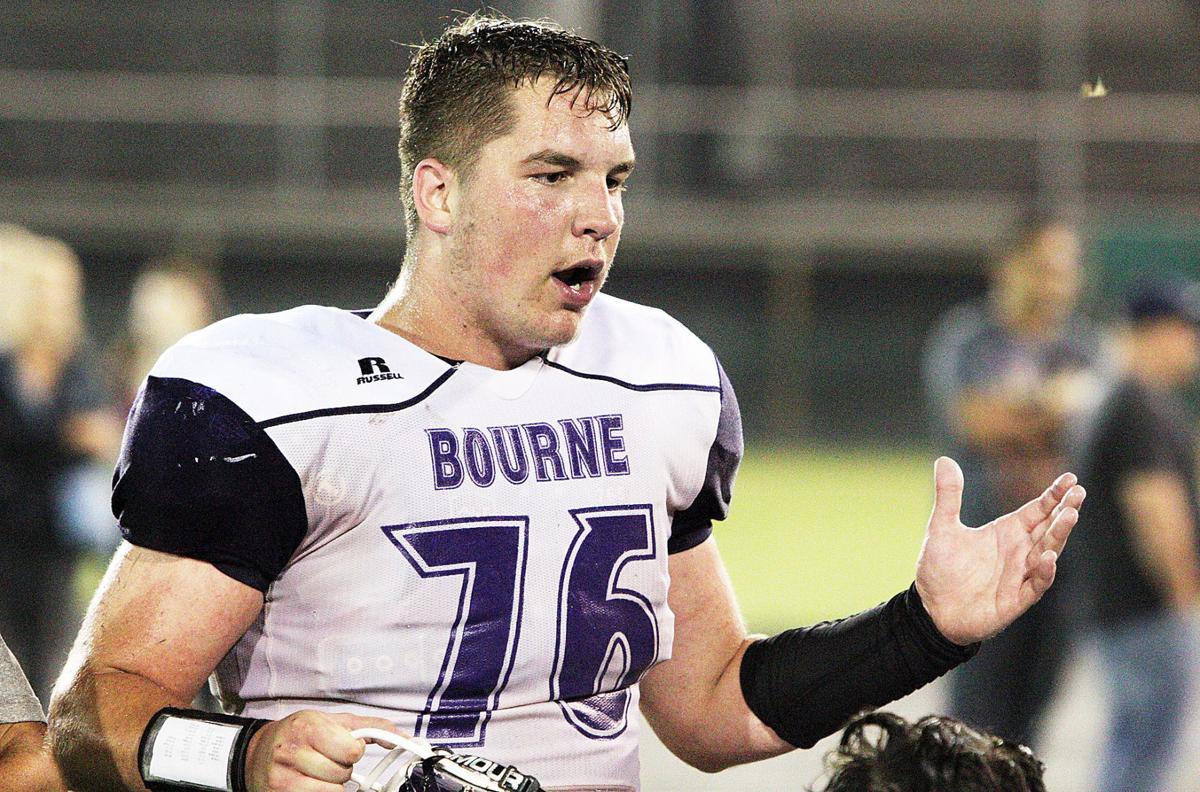 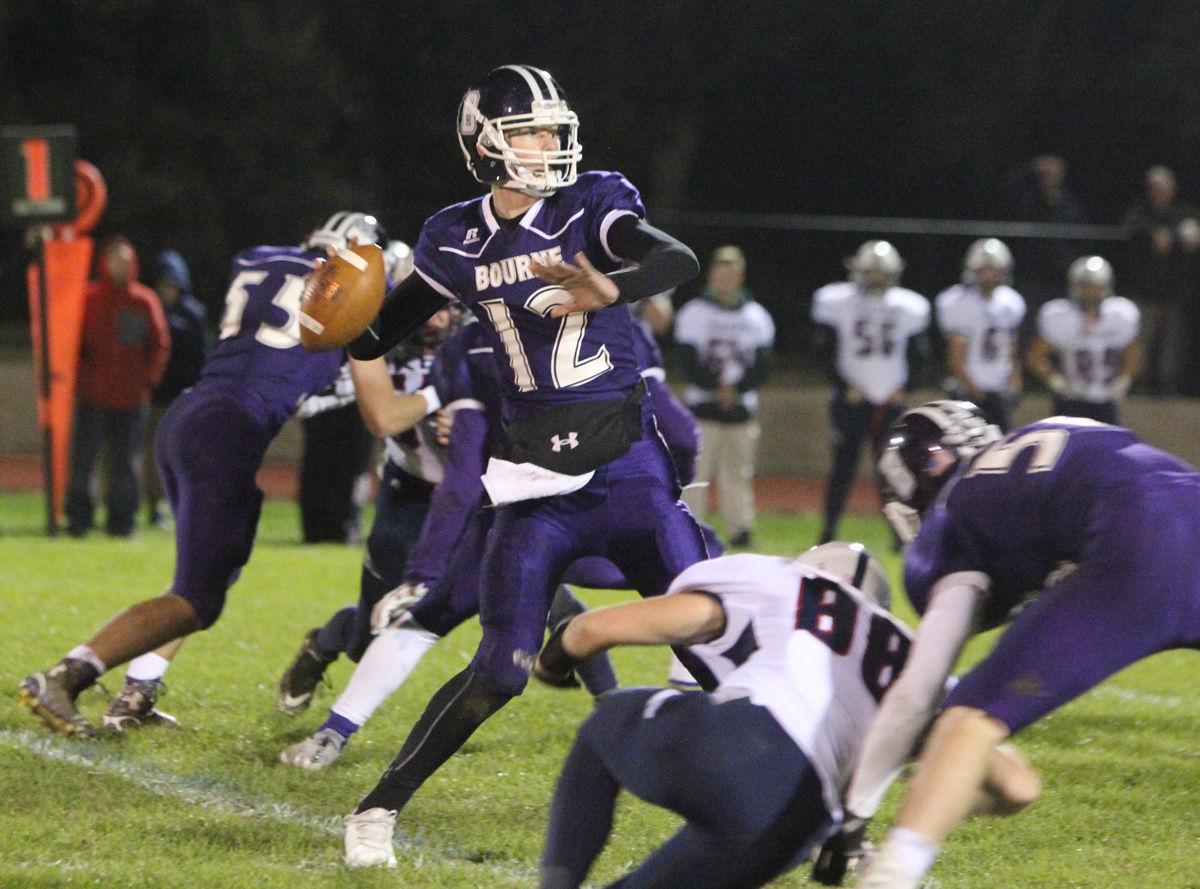 Bourne quarterback James Cahoon gets ready to unload a pass against Apponequet on Friday, October 19.

Forward Carly LaCasse was a go-to offensive player for the Bourne High field hockey team during her time in the purple and white.

Jacob Ashworth takes one to the net in Monday’s basketball game with Old Rochester. Ashworth led the scoring for Bourne with 31 points. The Canalmen fell short 77-63.

Bourne quarterback James Cahoon gets ready to unload a pass against Apponequet on Friday, October 19.

They may dominate the space in the sports section on a weekly basis, but high schoolers aren’t the only student-athletes the Enterprise sports department keeps tabs on. They no longer play for the Canalmen or Blue Knights, but on college campuses around New England, student-athletes are excelling at the next level at their sport of choice.

Whether it’s being named to an all-conference team, being named a collegiate captain or scoring game-winning goals, these student-athletes are representing their hometowns and high school alma maters in great fashion this fall sports season.

Below is a brief round-up of some local student-athletes who’ve made some lasting impressions this fall.

Now a sophomore at Saint Anselm’s College, LaCasse has played a key role in the Hawks winning their first-ever Northeast 10 Conference title. In 21 games, 19 of which have been starts, the former All-South Coast Conference player netted 12 goals and five assists for a total of 29 points en route to an appearance of the All-NE10 second team. The team overall is ranked third in the country.

With a record of 19-2, the season isn’t over for LaCasse. She’ll play in the NCAA Division II field hockey championship tournament as the Hawks earned the top seed in the East Region. They’ll play either East Stroudsburg or Assumption on Friday, November 22, at Millersville University in Pennsylvania.

The senior wide receiver has assumed the duties as the top wideout at Massachusetts Maritime Academy. Bennett is a big-play machine for the Bucs’ on offense and as a return man. He’s racked up 571 yards and two receiving scores on 23 catches for the 6-3 Buccaneers this season. He even gets in on some trick plays, as evident in MMA’s 28-14 win against UMass-Dartmouth last week, when Bennett found fellow receiver and Sandwich alum (more on that later) Ryan McNally for a 23-yard touchdown pass on a double-reverse play. On the year, he is 3-for-3 passing for 50 yards and a touchdown.

The 6-2, 200-pound Bennett ranks among the top five in the Massachusetts State College Athletic Conference in receiving with 63.5 yards per game.

A former captain of the Canalmen football team, Gordon did not see a single minute of action his freshman season at Colby College after playing as a linebacker and offensive lineman for Bourne. As a sophomore this year, Gordon played in all nine games for Colby as an offensive lineman.

The Mules struggled this season despite the 6-3, 260-pound Gordon in the lineup, going 2-7 against New England Small College Athletic Conference competition. Colby did win its final game of the year, 47-34, against Bowdoin College.

Now a senior at Lasell College, Sullivan won’t play for the baseball team until the spring, but the former Blue Knight made news this fall. The Lasers catcher was recently named a captain for 2020 season after posting a 2019 season with four homers, 29 RBI and 21 runs scored while hitting .354, slugging .583 and reaching base 42 percent of the time.

He played a key role, playing in 33 games, for the Lasers, who went 23-17 and 9-7 in the Greater Northeast Athletic Conference last season. Sullivan will be one of nine seniors on the roster come spring.

It didn’t take long for Fenton to make an impact at the collegiate level. A season after guiding the Canalmen to a Division 3 state volleyball title, she appeared in 26 matches for NCAA Division III Emmanuel College this fall. Getting 16 starts from the right-side hitter position, the freshman totaled 104 kills, 28 digs and 21 blocks this year for the Saints, who went 8-21 and 3-9 in the Greater Northeast Athletic Conference.

She won’t stop making headlines anytime soon as the basketball season is set to begin for the Saints. Fenton’s first collegiate basketball game is Saturday, November 16, against St. Joseph’s (Brooklyn) at home. She eclipsed the 1,000-point threshold for her career last year with Bourne.

A 1,000-point scorer for the Blue Knights showing a strong inside game to match a deft shooting hand from outside, Wilson enters her sophomore season with NCAA Division II Merrimack College. Last season she appeared in 14 games for the Warriors and averaged 2.5 points and 2.1 rebounds in 9.2 minutes per game as a freshman.

She has yet to appear in a game this season for Merrimack (1-1), but the Warriors play University of New Hampshire on Saturday, at 6 PM at home.

Entering his junior season, Ashworth has been bestowed with a leadership position with the UMass-Dartmouth basketball team. After averaging 13.8 points, 3.3 assists and 2.4 rebounds as a sophomore, Ashworth has been named a co-captain for the 2019-20 season.

“Jake is the vocal leader of our team, and he is blessed with a tone of energy he brings to practice every day,” said Corsairs head coach Brian Baptiste, in his 37th season with the team.

There’s a Blue Knight tandem atop the receiving corps for Massachusetts Maritime Academy. While Bennett is the veteran leader with a penchant for big plays, McNally is a methodical pass catcher blessed with sure hands. He has 23 receptions for 256 yards and two touchdowns for the 6-3 Buccaneers, a team known for its ground-and-pound style on offense.

He was on the receiving end of a 23-yard touchdown from Bennett in the Bucs’ 28-14 road win against UMass-Dartmouth last week.

A redshirt junior for the Division I Rutgers, Downes went from a walk-on to a full-scholarship player for the Scarlet Knights last season. The Sandwich alum is a two-time member of the Big 10 All-Academic team. Rutgers (2-0) plays St. Bonaventure on Saturday, November 16, in Toronto for the Naismith Classic.

As a goalkeeper for St. Michael’s College, Hurley started 14 games for the 4-14 Purple Knights. She posted a 3.88 goals against average and a .721 save percentage. St. Michael’s was 2-12 in games she started in net.

The 6-foot-4 quarterback responsible for bringing the Canalmen back to the playoffs last season did not see very much playing time his freshman season at Bridgewater State University. The Bears (5-4) have depth at the quarterback position, with senior Stefano D’Emilia and sophomore Brad Thiltgen, but Cahoon still has the physical traits to play at the college level.

He appeared in two games, briefly, this season for the Bears, who finish their season in Buzzards Bay on Saturday, November 16, against Massachusetts Maritime Academy in the 41st Cranberry Bowl.

A hard-nosed player under Sandwich head coach Kelsy Beaton in high school, Sorenson brought a similar mentality to collegiate level this season a freshman at Colby-Sawyer College. The Chargers went 8-9 on the year, playing an NCAA Division III schedule.

Sorenson scored one goal on three shots in six games played this year.

Last year’s captain of the Canalmen golf team is one of five freshmen on the UMass-Dartmouth golf team this season.

Not long after guiding the Blue Knights to a 2019 girls’ golf state title in the program’s first year of existence, Hunt is a part of the NCAA Division I Merrimack golf program this fall. The Warriors placed fifth out seventh in the Sacred Heart University Fall Classic in their last tournament of the year.