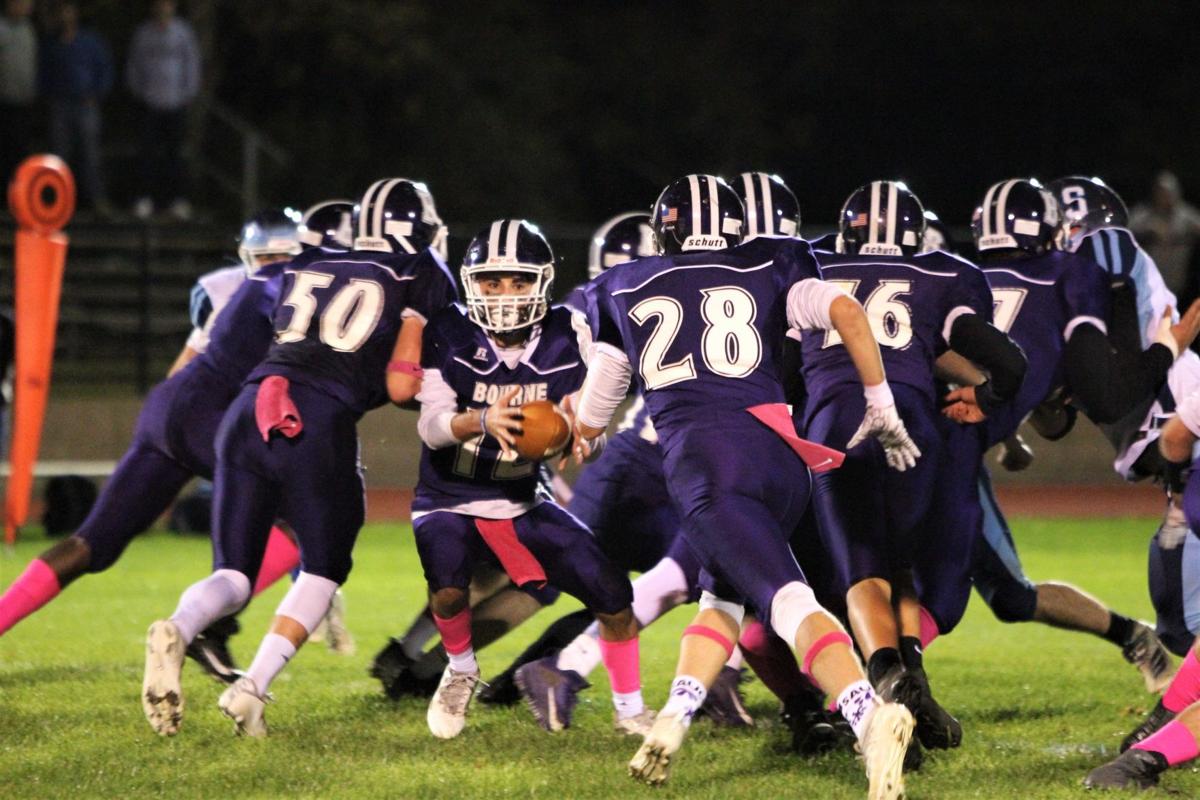 Bourne freshman quaterback Joseph Carrara readies to hand the ball off during a home game against Seekonk on Friday, October 18 at Jackson Field. 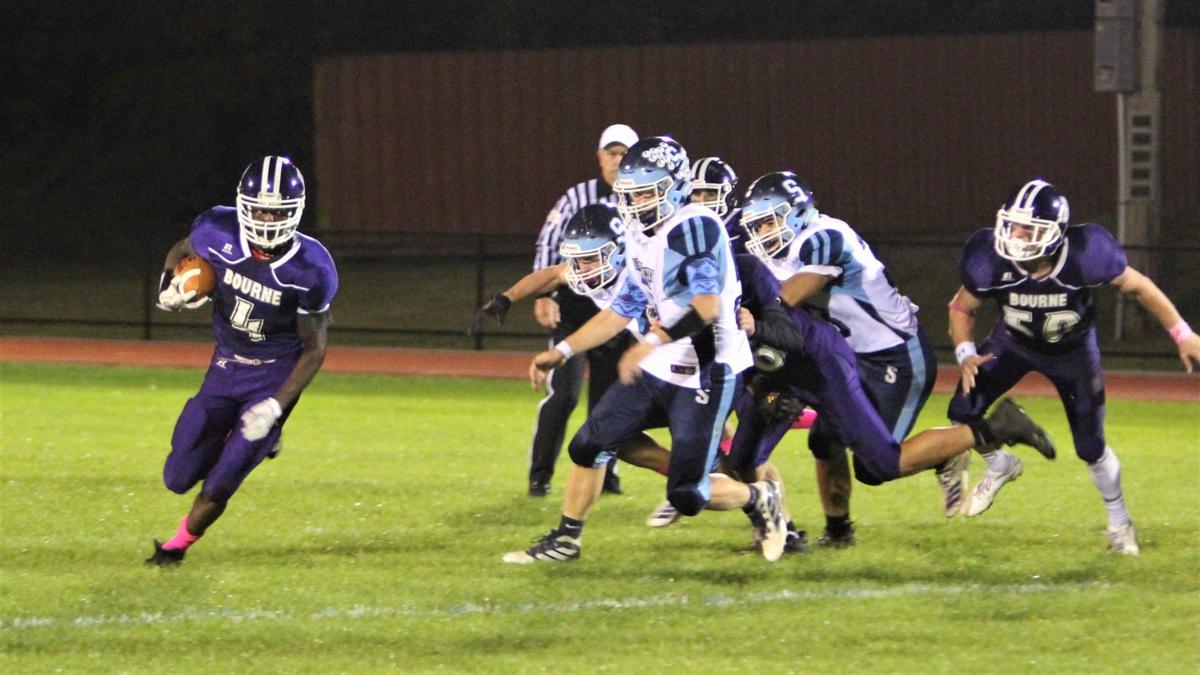 Bourne senior running back Jaimon Scott gained 80 yards and scored a touchdown as the Canalmen fell to Seekonk at home on Friday, October 18.

Bourne freshman quaterback Joseph Carrara readies to hand the ball off during a home game against Seekonk on Friday, October 18 at Jackson Field.

Bourne senior running back Jaimon Scott gained 80 yards and scored a touchdown as the Canalmen fell to Seekonk at home on Friday, October 18.

Hosting the Warriors in a South Coast Conference Small Division showdown at Jackson Field on Friday, October 18, the Canalmen opened the game by allowing 21 unanswered points and could never recover, falling to Seekonk, 35-14.

The Warriors, which won its fourth-straight game against the Canalmen, were led by junior quarterback Jared Moran, who threw for 203 yards and two touchdowns and rushed for 93 yards and scored two more on the ground. He found Jack Murphy for a 21-yard touchdown pass that put Seekonk on top 14-0 in the first quarter. Then, on his first drive of the second half, he connected with Nathan Clarke for a 48-yard touchdown to go up 21-0.

Although the Canalmen trailed by two scores at halftime, the play of their defense was a big reason their deficit stood at 14 for as long as it did. Senior Gabriel Sequiera had himself a defensive game to remember, coming up with 3.5 sacks—sharing one with classmate Josh Gonzalez.

Bourne got on the scoreboard in the third quarter. Senior running back Jaimon Scott scored from 11 yards out as he capped off a five-play, 40-yard drive in which he accounted for 24 yards on four carries. He finished the game 80 yards on 18 carries. The defense gifted the offense with a short field on that touchdown-scoring drive, as the Canalmen recovered a fumble to get the ball at their own 40.

In fact, on five occasions the Bourne offense began with the ball around midfield or in opponent’s territory. Those drives resulted in two turnovers on downs, a punt, a fumble and a touchdown. One of those drives included Bourne’s first of the second half, after senior Logan Hawkes successfully converted the onside kick attempt.

Trailing 35-7 in the fourth quarter with just under nine minutes left, the Canalmen embarked on their second scoring drive. Scott picked up 12 yards on three carries, including a fourth down conversion, while Shawn McDonough and Ryan O’Connor each had gains. But on the sixth play of the drive freshman quarterback Joseph Carrara kept the ball for a sneak. The signal called got lost in the moving pack before breaking free for a 44-yard touchdown run. Carrara finished the game with 66 rushing yards and 16 passing yards.

Hawkes converted both point-after kicks in the game.

NUMBER TO KNOW: 4 — The number of times senior defensive lineman Gabriel Sequeira got to the quarterback in the game. He finished with 3.5 sacks, sharing one with teammate Josh Gonzalez.

KEY PLAY: Trailing 14-0 at halftime the Canalmen elected to attempt an onside kick to begin the second half. Despite the two-score deficit, the Bourne defense had forced three-straight punts to close the first half. Senior Logan Hawkes executed the squib kick successfully, but Bourne’s offensive drive stalled out at the Seekonk 28-yard line.

ENTERPRISE SPORTS PLAYER OF THE GAME: Jared Moran, QB, Seekonk — The junior signal caller accounted for four touchdowns, two on the ground and two through the air. He also totaled 296 yards in the game, with 203 through the air and 93 more on the ground.