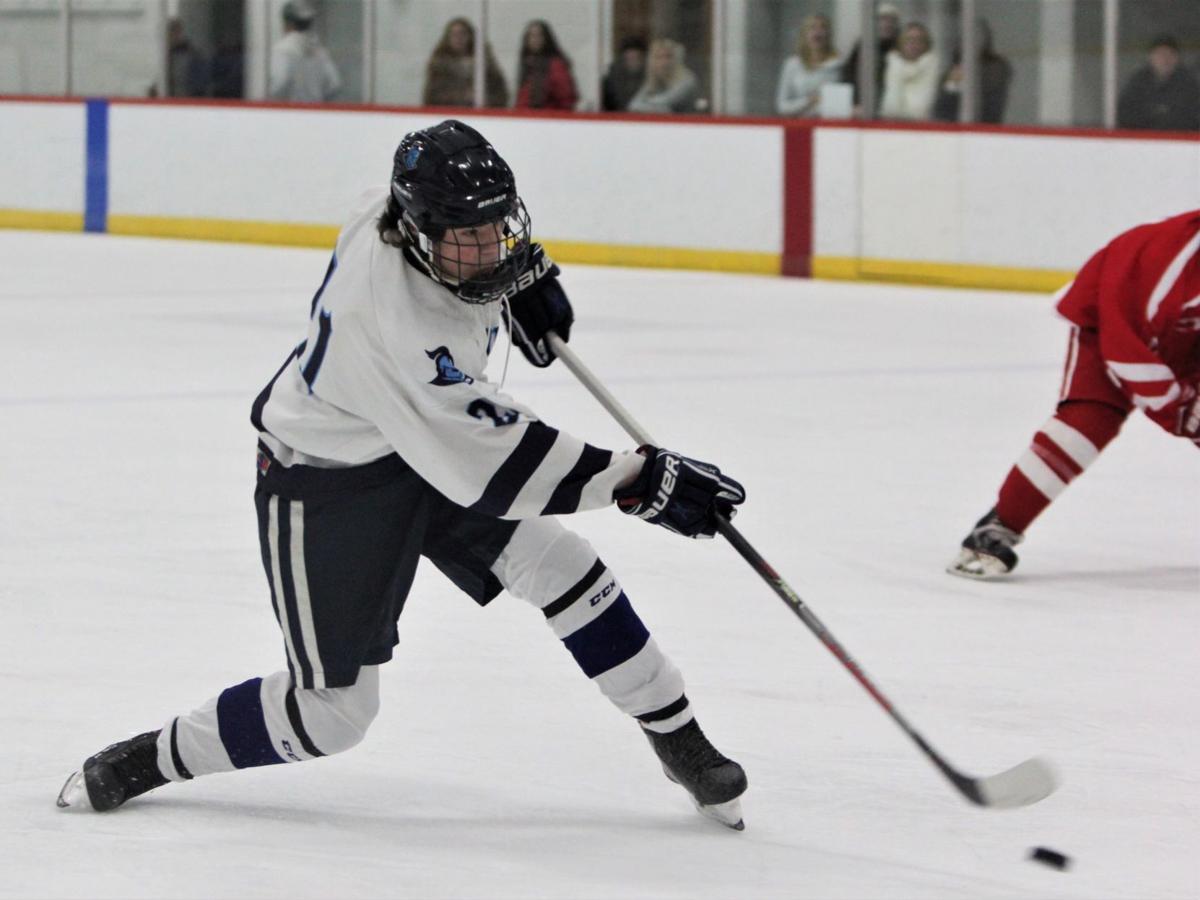 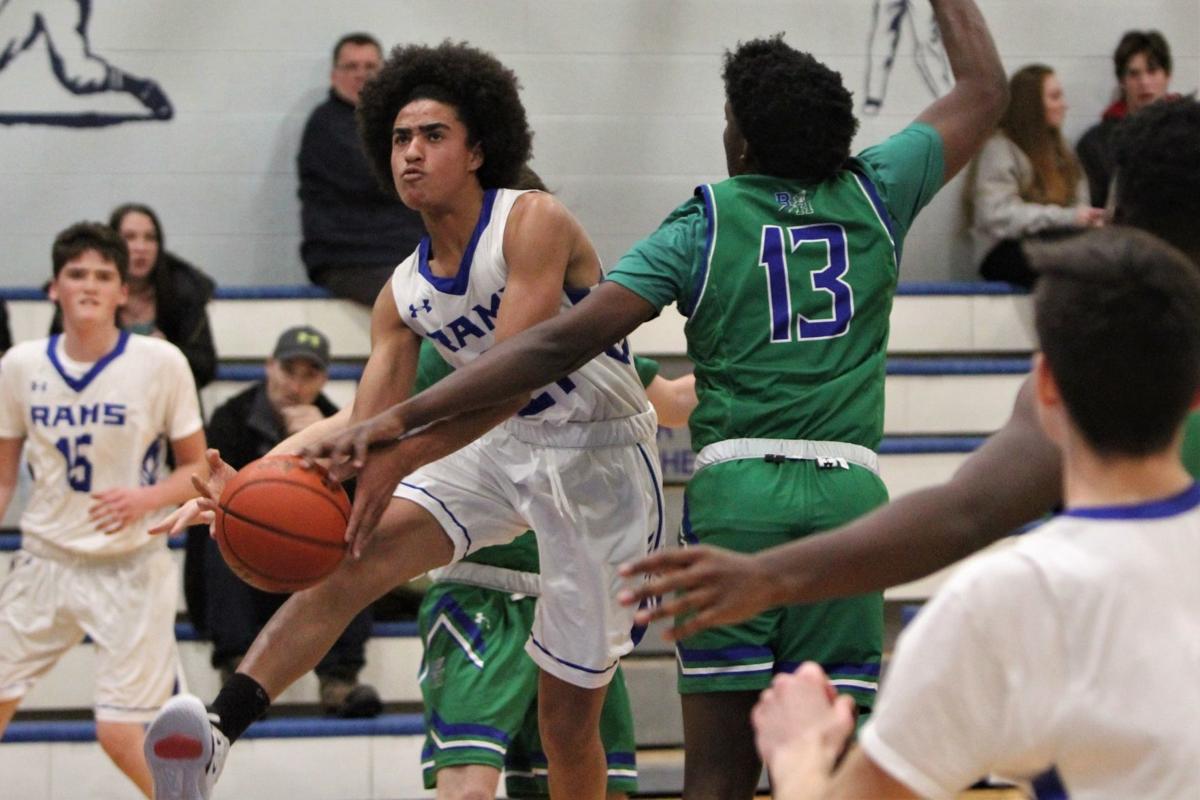 UCT junior guard Jayden Nascimento rises towards the hoop as the Rams boys' basketball team has risen to a 4-0 start on the 2019-2020 season.

Down, but never out, the Sandwich boys’ hockey team battled back from an early first-period deficit to pick up two hard-earned points on Saturday, January 4, at Gallo Ice Arena.

The Knights trailed visiting Shawsheen Valley Tech 1-0 through one period of play and found themselves tied heading into the second intermission before two unanswered third-period tallies gave the hosts the non-league win, 5-3.

Junior Jack Greeley scored the second of his two goals on the night to break the 3-3 tie in the third. Junior Rob Cardillo and senior Zack Hawkins assisted on the eventual game-winning score. But Sandwich wasn’t done in third. On the penalty kill with Shawsheen opting to pull its goalie for the extra skater, Cardillo fought his way through for the empty-net goal to ice the game.

While the Knights won the game in the third period, the comeback was sparked in the second period. Max Slicer got his team on the board, finishing off a pass from Connor Durant, to knot the game at one apiece. Following another Shawseen goal, Greeley put in his first of the game to tie things back up at two on an unassisted tally. Tim Clark gave Sandwich its first lead of the night, 3-2, when he was set up by Cardillo and Hawkins. After missing the last few games, senior Carson Schemenaur returned to his perch between the pipes.

The Knights didn’t let a late score from the visitors to tie the game, 3-3, heading into the second intermission derail their comeback efforts.

Sandwich (3-5, 0-1 C&I Atlantic) will look to pick up its first Cape & Islands League Atlantic Division win on Wednesday, January 8, when Nauset comes to Gallo Ice Arena for an 8 PM tilt.

The Lakers erupted for three goals following a scoreless first period and goals from junior Alex Duval and senior Karsten Becker weren’t enough to score the road win at Driscoll Arena in Fall River. Duval’s goal came in the high-scoring second frame, assisted by Owen Lapworth, that pulled the Canalmen within a goal, 2-1. Becker’s goal closed Bourne within a goal once again, 3-2, late in the third period. Senior Andrew Ariagno assisted on the goal.

Bourne (2-4, 1-2 SCC) will head back to Driscoll to meet Somerset-Berkley in another SCC clash on Wednesday, January 8 at 7 PM.

The Upper Cape Tech boys’ basketball shook off the rust of a long holiday layoff to score a non-league road win on Friday, January 3, at the Hyannis Youth & Community Center.

The Rams fell behind 10-0 to the Storm but quickly found their rhythm en route to their fourth-straight win to begin the season. Led by its trademark pestering defense, UCT went on a 30-3 between the end of the first quarter and into the second and was able to hang on for a 66-53 win.

After gaining a 30-23 halftime lead, UCT fell behind Sturgis East late in the second half, 49-47. But then the Rams kicked it back into high gear, ending the game on a 16-3 run.

In the game within the game, the Storm’s Nate Nawoichek outscored his younger brother Jared, a sophomore with the Rams, 10 to nine — mirroring the tightly-contested outcome between the two teams.

The Bourne girls’ basketball team surged in the first half, but fizzled down the stretch in a hard-fought South Coast Conference Gold Division loss on Friday, January 3.

Kaya Fernandes and Haley McCarthy combined to score 18 points in the first half, outscoring the entire Blue Devils team in the process, en route to a 21-17 halftime lead. But Fairhaven captured the lead in the second half and denied Bourne any points over the final 2:30 of action for the win, closing the game on a 5-0 run.

Another game, another back-and-forth nail-biter for the Sandwich boys’ basketball team.

Junior co-captain Chris Cronin scored a game-high 23 points, but only four other Blue Knights found their way into the scorebook as they came up just short once again against the Eagles on Friday, January 3.

Plymouth North jumped out to a 16-10 first quarter lead before Sandwich battled back to close the gap to four points, 25-21, at halftime. Coming out of the break, Cronin caught fire, scoring 12 of his team’s 20 points that frame. Senior co-captain JP Downes added two 3-pointers, six of his 11 points on the night, to add to the offensive outpour. The trouble was, the Eagles also scored 20 points in the third quarter to keep the Sandwich deficit at four points, 45-41, entering the final frame.

Sophomore Sean Lansing scored five of his nine points in the fourth quarter, including one of the team’s seven made 3-pointers, as the Knights won the quarter, 10-9, but not by enough.

The Eagles scored a 68-53 home win against Sandwich to open the season on December 13. In Sandwich’s four losses on the season, the average margin of difference is seven points, with two games being decided by one possession.

A strong quarter by the Blue Devils was enough to hand the Bourne boys’ basketball team its South Coast Conference Gold Division opener on Friday, January 3.

Steve Barmashi scored a game-high 17 points and classmate Cam Dunbury put up 12 points, 16 rebounds and six blocks in another closely-contested loss. Fairhaven came out of the half on a 17-10 run in the third quarter that broke open a 24-23 halftime lead.