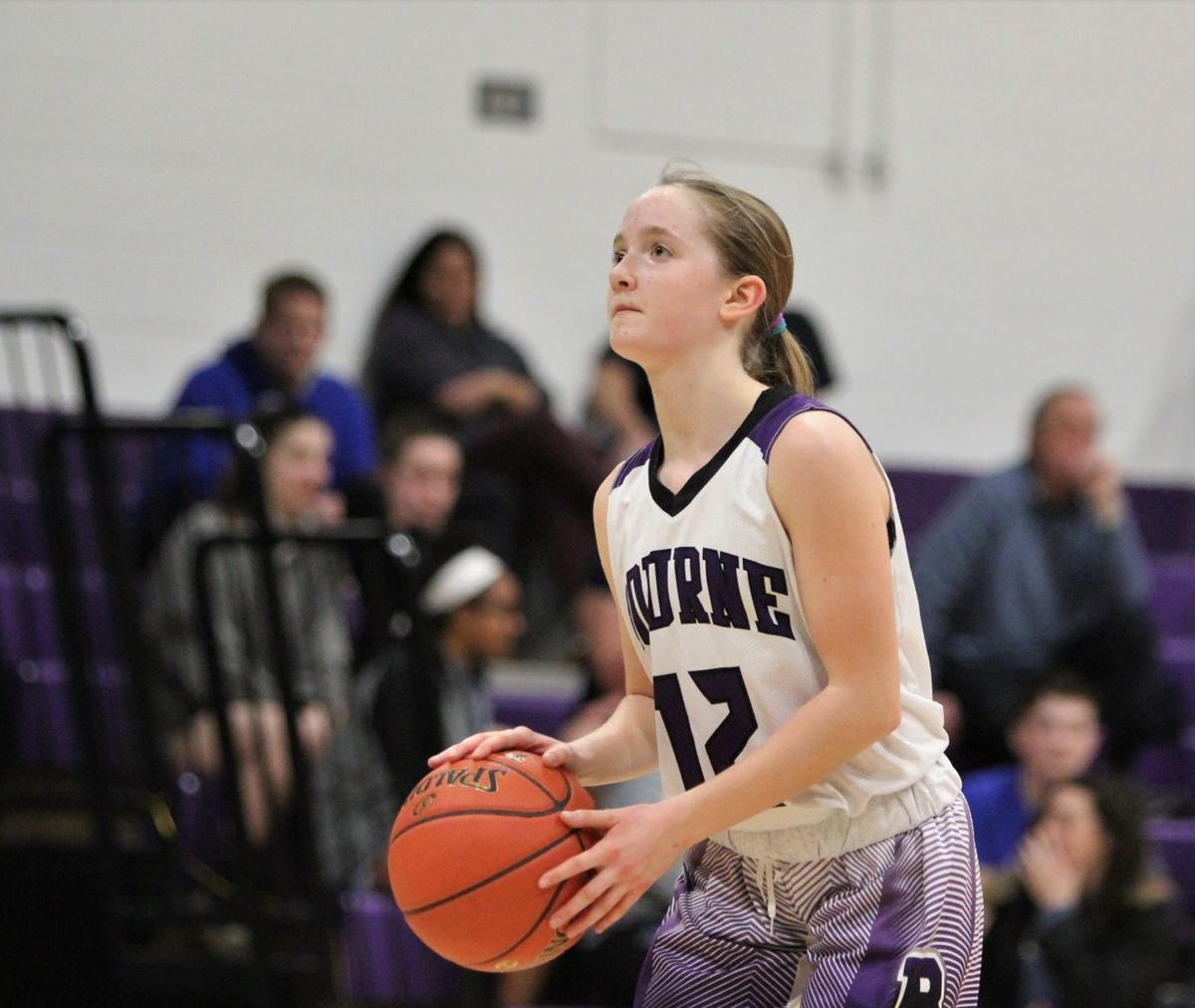 Bourne freshman Haley McCarthy has been a key contributor in her first season with the Canalmen girls' basketball team. She scored nine points, all for beyond the arc, in the team's 10th-straight win on Friday. 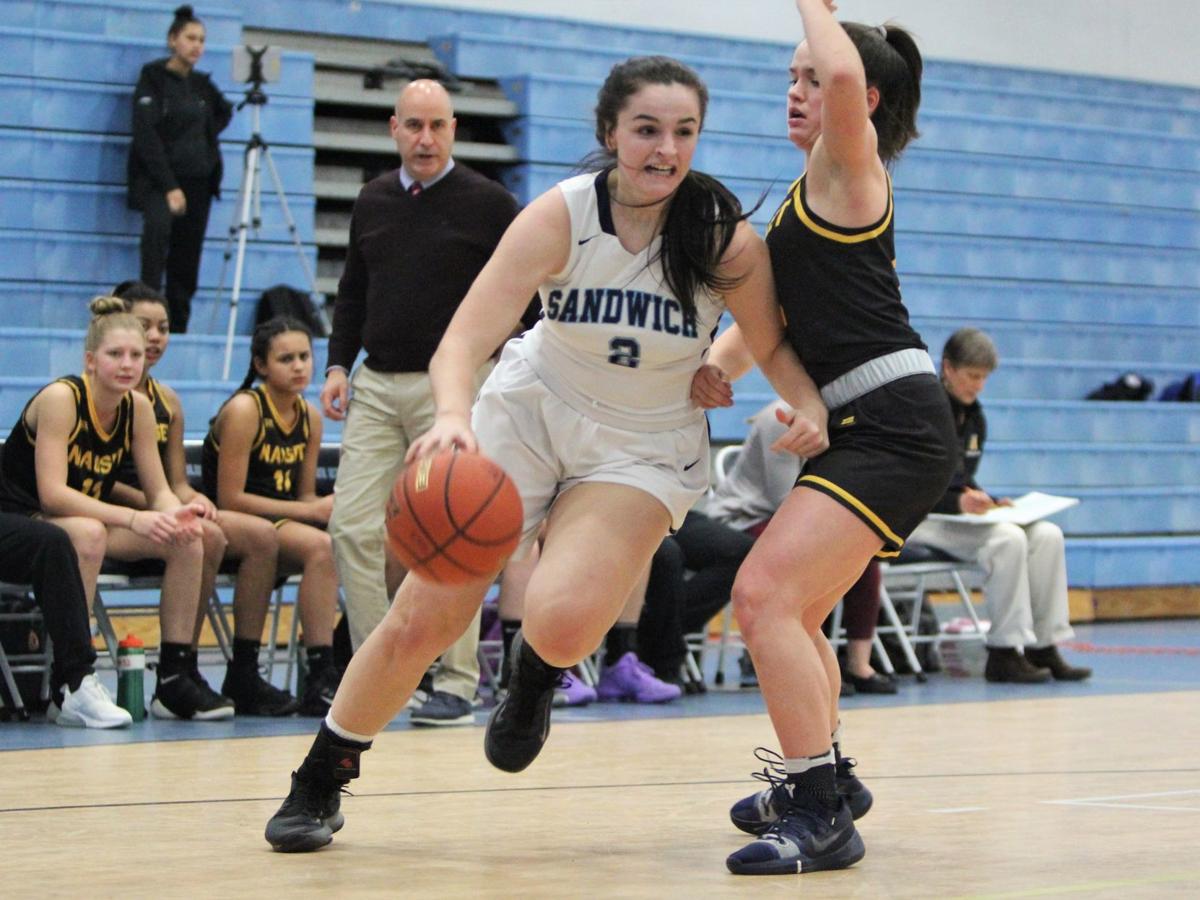 Sandwich senior Sadie Hunt was one of four seniors honored during the Blue Knights' home game on Sunday against Martha's Vineyard.

For the third straight season, the Bourne girls’ basketball team was crowned champions of the South Coast Conference Gold Division.

The Canalmen were led by sophomore Nora Barmashi’s game-high 22 points, guiding her team to their 10th straight victory against Case, 51-43, on Friday, February 7, in Swansea.

Knotted at 14 after the first eight minutes of action, Barmashi erupted for 18 points in the second quarter — scoring most of her buckets in transition under Bourne’s run-and-gun scheme. She was solely responsible for all of her team’s points that frame as the visitors took a 32-26 into the break at halftime.

But the game slowed down in the third quarter, as Bourne clamped down on defense to hold Case to just four points. The Canalmen, meanwhile, scored 10 to carry a 42-30 lead into the fourth.

Forward Jess LaFlamme posted career highs in points and rebounds, with fix and six, respectively, while freshman Haley McCarthy scored all of her points from beyond the arc, finishing with nine.

Senior Lauren Condon pushed the opening tip-off to classmate Sadie Hunt and she fed senior Maggie Nardini for a layup on the right block for the first points of the game on Sunday, February 9.

It was a memorable bucket for the senior co-captain Nardini, who has missed the  season after sustaining a knee injury this past summer. With her fellow classmates on the court celebrating the girls' basketball team's senior night, it was even more special.

From there, the Knights dominated the Vineyarders to earn the regular season sweep against the island squad, after previously scoring a 62-31 win on the Vineyard on January 14.

Sierra Brigham, a sophomore, put up a game-high 18 points while Hunt scored 12. The two teams were knotted 27 at halftime, but a 13-2 run over the course of the third quarter created a comfortable lead entering the final eight minutes of action.

Involved in yet another tightly-contested game, the Bourne boys’ basketball came out victorious against a South Coast Conference Gold rival on Friday, February 7.

The Canalmen received some clutch free throws from freshman Shea Ullo while getting quality minutes from freshman Trey Merritt as they hung on for a 68-64 win against Case at home.

Steve Barmashi and Chris Darcy — two senior co-captains — each finished with 17 points for the hosts while classmate Cam Dunbury posted 14 points, 10 rebounds and three blocks in the win. Barmashi opened the game nailing three-straight 3-pointers to give the Canalman an early 9-0 lead that turned into an 18-11 lead after the first quarter.

Bourne led by nine at halftime, 37-28, and extended the lead in the third by 18, 56-38. But the Cardinals’ Alex Levesque scored 12 of his game-high 20 points in the fourth quarter to close the gap and make things interesting. The Canalmen withstood the late surge with Ullo sinking two free throws late in the game to preserve the victory.

The Sandwich/Upper Cape Tech wrestling program ended the previous decade as the last-ever champions of the Atlantic Coast League. The Knights began this decade by staking claim to the first-ever Cape & Islands League title on Friday, February 7.

Hosting the tri-meet at the Wing School with fellow Cape & Islands league teams Nauset and Barnstable, the Knights boasted 10 undefeated grapplers en route to a sweep.

Connor Gill went 1-0 in his 132-pound weight class while Andre Penney, competing at 285 pounds, went 2-0 to round out the 10 undefeated wrestlers for Sandwich/UCT.

Sandwich (10-7-1, 4-0 C&I) awaits the Division 3 South Sectional tournament, which will be held on Saturday, February 15, at Foxboro High School.

Playing a non-conference regular season game at the Dunkin' Donuts Center in Providence, the Bourne boys' hockey team did not disappoint playing at a big venue.

Squaring off against the Indians on Sunday, February 9, the Canalmen took an early lead, but the one-loss Dartmouth team (16-1-1) came back to earn the regular season sweep against Bourne.

Junior Matt Glennon opened the game's scoring with an unassisted goal in the first period before Dartmouth knotted the game in the second period and went ahead in the third.

Senior co-captain Kyle McGuire stopped 40 of 42 shots on net in defeat. Dartmouth won 5-0 in the Canalmen Classic against Bourne on December 21.

The Blue Knights girls' hockey team scored in the opening minute of action on Sunday, February 9, and never looked back en route to the team's fifth shutout on the season.

Paige Hawkins scored early in the first period, scoring the only goal sophomore netminder Sophia Visceglio would need. Linemate and senior co-captain Kileigh Holt scored late in the period to stake the Knights to a 2-0 lead after the first intermission.

Hawkins' second of the game came late in the second period, giving the hosts a 3-0 game before senior co-captain Lauren MacPherson scored on assists from Emily Souke and Sydney Sawyer in the third period. Holt capped the scoring the for the game, finishing off a pass from Hawkins.

Visceglio stopped all 16 shots she faced on the afternoon.

“We had a great finish in the 4x400-meter relay. We’re looking forward to the spring,” Bourne indoor track coach Bob Gurkin said.

Scott went on to place third in the high jump, with a leap of five feet, eight inches and earned six points. He added four points to his team total in the 300-meter, where he placed fourth with a time of 0:37.61. More notably about that event, Scott broke the school record in the 300-meter by nearly a second — a record Scott previously held.

Sweeney posted a top-10 finish in the 600-meter, placing eighth with a time of 1:32.34. Gabriel Sequeira finished 13th in the shot put with a heave of 35 feet and nine inches while Aleks Cavanagh finished 20th with a toss of 32 feet, six inches.

Taylor Dodge was the only Canalmen on the girls’ side to record any points on the afternoon, as Bourne finished 10th out of 10 teams. Her time of 6:14 in the mile not only was a personal-best, but was also good for sixth place.

As winds gusted along the east coasts upwards of 70 miles per hour, multiple games that were on the slate for Friday, February 7, were cancelled. Both Upper Cape Tech boys’ and girls’ basketball games against Old Colony—with the girls traveling to Rochester—were postponed to later days.

Likewise in Sandwich, which had road and home basketball games against Martha’s Vineyard, were also rescheduled with the girls' game getting made up on Sunday, February 9.