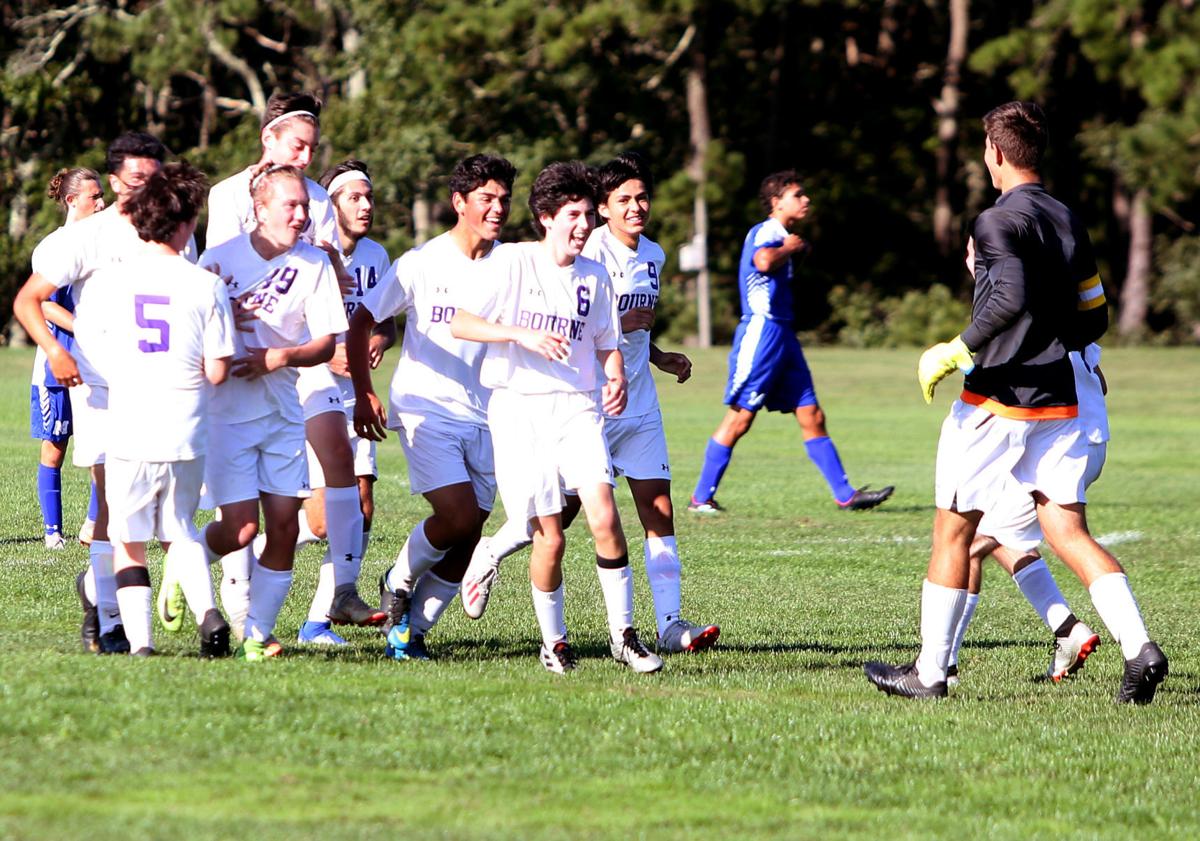 The Bourne Canalmen were all smiles after scoring their first goal of the year against Mashpee. 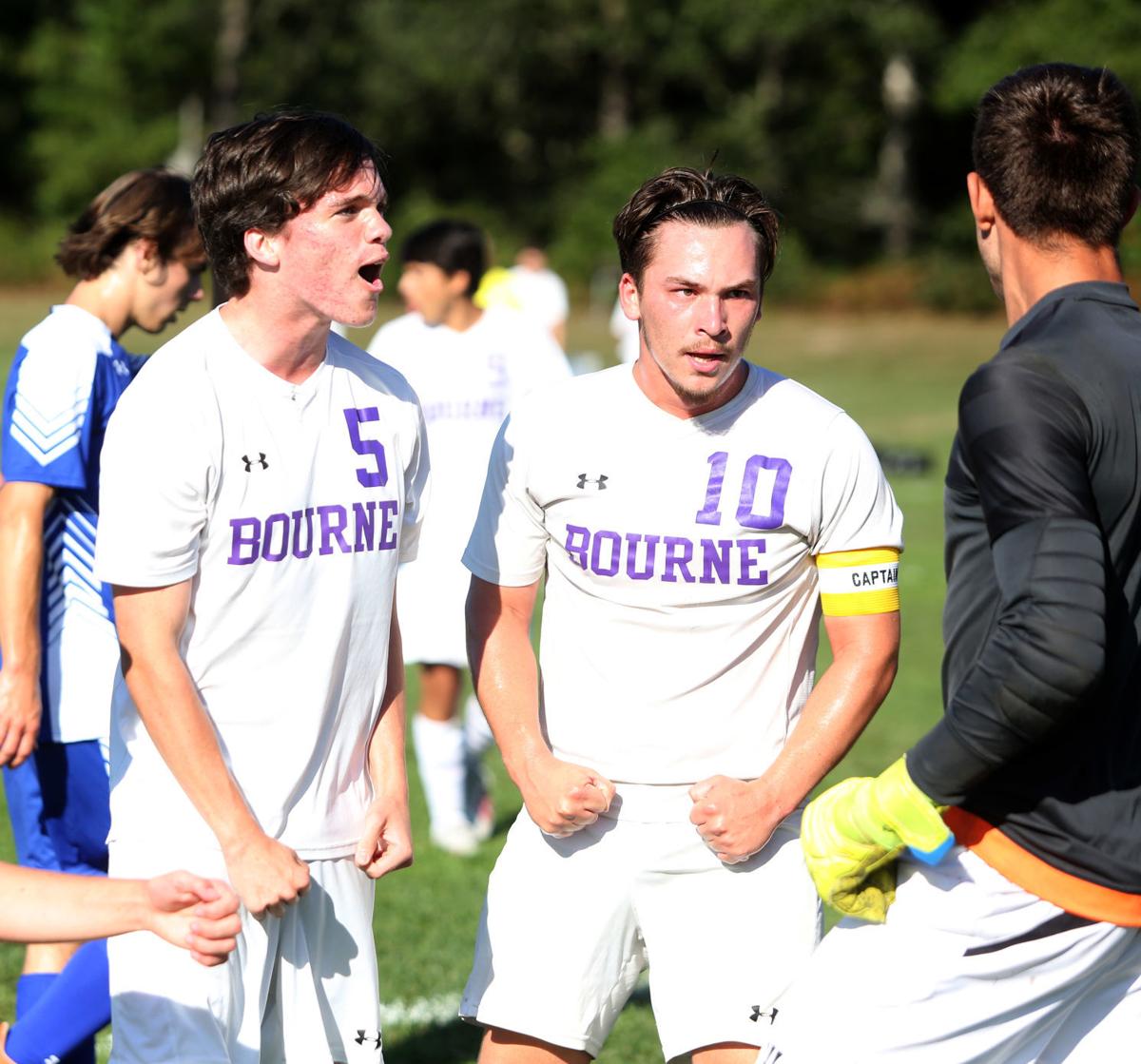 Thomas Sullivan and Armond Eldredge celebrate with goalie Shane Murray after the BHS keeper saved a penalty kick against Mashpee.

The Bourne Canalmen were all smiles after scoring their first goal of the year against Mashpee.

Thomas Sullivan and Armond Eldredge celebrate with goalie Shane Murray after the BHS keeper saved a penalty kick against Mashpee.

After posting consecutive shutout wins the Bourne High School boys’ soccer team ran into some trouble on the road on Wednesday, September 18. A bad case of bus legs and a slow start hampered the Canalmen in a 6-1 defeat against Greater New Bedford Voke Tech.

Sohrob Nyman had the lone goal for the Canalmen, who trailed 4-0 at the half. Nyman put in a breakaway that was set up by a sweet through ball by Armon Eldredge. Unfortunately that was it for offensive highlights for BHS.

Defensively Tom Sullivan had a strong game. Coach Andrew Arki noted Sullivan had 10 clear outs and 10 tackles in the match. Tyler Cass made eight tackles and also played well. Wyatt Ream made eights save in goal.

Senior captain Armond Eldredge had one heck of a second half for the Bourne High School boys’ soccer team against Wareham on Monday, September 16. Playing the roles of both sniper and facilitator, Eldredge scored one and set up three goals as the Canalmen topped their rivals from Wareham by a 4-0 score.

Sohrob Nyman also had a big game, scoring two goals and an assist. Nick Card had the other Bourne goal with a brilliant play on a free kick, heading it home past the goalie.

Wyatt Ream and Shane Murray shared time in goal, and split the shutout for the Canalmen, who won for the second game in a row. Andrew Ariagno had a big game in the midfield for the Knights.

The celebration said it all.

Through four games the Bourne High boys’ soccer team had not scored a goal, and the pressure was building. Coach Andrew Arki’s team had played some strong soccer during their scoreless streak, which lasted about 345 minutes, but could not break the seal.

Finally, after coming painfully close a number of times earlier in the first half, the Canalmen secured their first goal of the season as Matt Ziehl finished off a flurry of BHS chances with a hard shot by the lunging Luke Olson. The goal stood up as the Canalmen posted their first win of the season with a hard-fought 1-0 victory against the Mashpee Falcons (0-2) in Mashpee.

“That was big,” Sohrob Nyman said after assisting on the goal. Ziehl had started the play with a shot on net and then Nyman followed up with a blast that hit the crossbar. Ziehl got to the ball before Olson could recover and put it away.

The Falcons nearly came back to tie the score shortly after that when Nick Almeida was pulled down inside the box while trying to cut through traffic to get a shot off. Almeida was awarded a penalty kick and the opportunity to tie the score, but Shane Murray made the save of the day as he guessed correctly and went to his left to deflect the bid by Almeida. Murray allowed a rebound on the play, but Almeida’s rushed follow-up flew high and out of play and the Canalmen dodged a huge bullet.

Mashpee had another great opportunity in the 50th minute when Dylan Barger took a free kick from about 25-yards out. The shot by Barger was on line, but was ruled to have hit the crossbar. Mashpee argued that it had gone in, and later found video evidence that they were correct, but the referee’s ruling stood and the Falcons were left trailing despite Barger’s effort. The ball hit the inside support of the goal and immediately bounced out, fooling the referees.

“It’s a part of the game. I’d rather not have visually assisted refereeing go down to the high school level. You just have to deal with it. I’m sure it won’t be the last one... I don’t want to take anything away from Bourne. This hurts, but they beat us. You have to shake their hands and then look forward to getting them next time. It’s back to the drawing board, back to working hard.”