A nurse prepares a vaccine dose 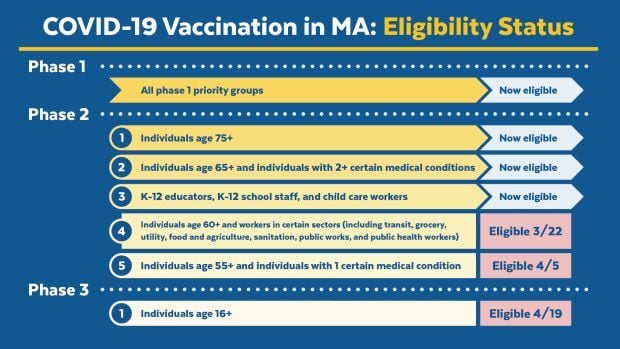 All Massachusetts residents over the age of 16 will be eligible to receive the COVID-19 vaccine by April 19.

Governor Charles D. Baker Jr. announced the eligibility timeline for all remaining cohorts in the state on Wednesday, March 17.

On Monday, April 5, residents over the age of 55 will become eligible alongside people who have one underlying condition.

Lastly, on Monday, April 19, the vaccine will become available to the general population. Currently, that includes residents over the age of 16.

The decision to accelerate the timeline comes as the federal government has promised an increase in vaccine distribution to all states.

The increase has started this week, with a total of 170,000 first doses being delivered. This includes 8,000 doses of the single-dose Johnson & Johnson vaccine, which was an unexpected addition as the state was not previously expecting more of that vaccine before the end of the month.

A boost from the federal government has also been provided for the pharmacy partnership, which will bring more doses to locations such as CVS Pharmacy, Walgreens and Stop & Shop.

Across the state, 106,440 first and second doses have been allocated to retail pharmacies.

"We can only move as fast as the manufacturers produce vaccines," Gov. Baker said. "Thankfully production is picking up."