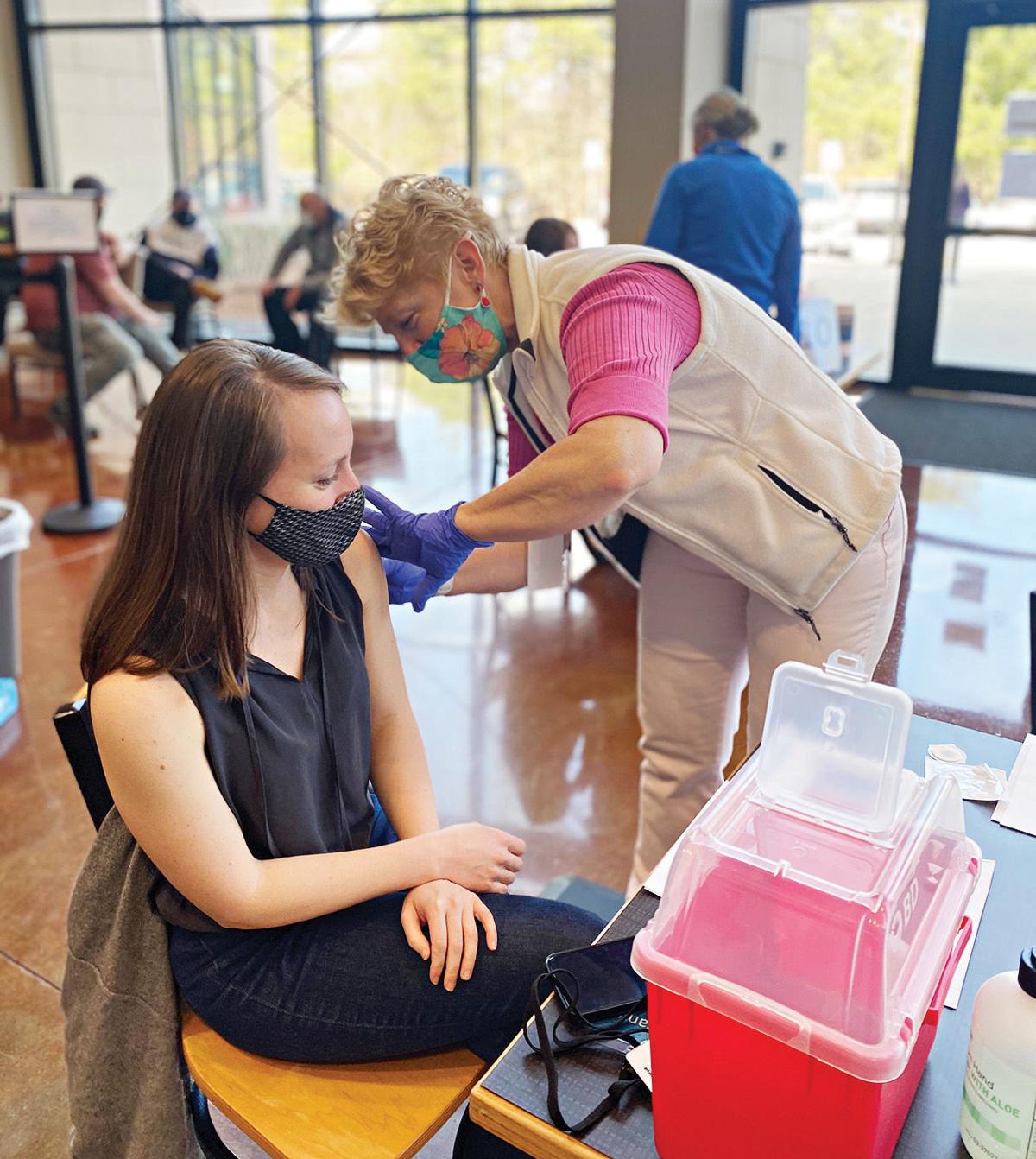 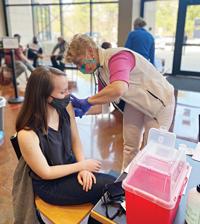 Brittany Feldott, 26, of Falmouth receives her first dose of the Moderna vaccine during a clinic last week at Cape Cod Church. The church lobby accommodated 10 workstations and a 15-minute waiting area for patients after vaccination. 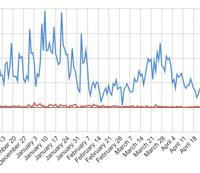 This graph shows the daily new confirmed and probable cases of COVID-19 as well as related deaths on Cape Cod from the first reported case in March 2020 through April 22 of this year.

To date, more than 450 Cape Codders have died because of COVID-19. One resident is making sure that these pandemic victims are not forgotten. Denise Harris, of Hyannis, lost her father to the disease this year and is now planning a memorial to recognize each of the lives lost to the virus on Cape Cod. The memorial will be installed in Hyannis, potentially through this summer.

The pandemic has also had a huge impact on education throughout the state. School districts have been pleading with the Massachusetts Department of Education to postpone MCAS, citing that the test will not show any useful data given the irregular nature of the school year. The test has not yet been completely canceled, but it will not be a graduation requirement for this year’s junior class.

When it comes to vaccines, all Massachusetts residents 16 years and older are now eligible to be vaccinated. More than half of Cape residents have already received at least one dose of a COVID-19 vaccine, including 94 percent of residents over the age of 75.

Residents are cautioned that while the vaccines have been found to be very effective, they are not impenetrable.

After her father died of COVID-19 in January, Ms. Harris was galvanized to create a memorial to the Cape Cod victims of the disease.

“I don’t have any title. I’m just a daddy’s girl who lost her father,” she said.

Her father had tested positive for the virus in early January and went 11 days without having any symptoms. On day 12, she said he was not able to carry on a phone conversation without losing his breath.

Ms. Harris had him go to the hospital, where he died 10 days later.

An only child, she said she would talk to her father two or three times a day.

“It turned my world around when he passed away,” she said.

After he died, she said she saw the numbers of people who died in the region continue to climb and realized that nothing had been done to recognize these people, so she decided to take on that work herself.

She brought the idea to her employers at CapeAir, who will be paying for the 500 flags in the COVID-19 colors—yellow and maroon—that will be placed at the Airport Rotary in Hyannis. The death toll on the Cape is currently at 459, but Ms. Harris said she will add flags to the memorial as necessary.

Additionally, she will personalize the flags with the names, towns and dates of death for anyone who wishes to have their loved one be a part of the memorial.

The information to be put on the flags can be sent to Ms. Harris at covidvictimsofcapecod@yahoo.com.

She said that 57 families have already asked to have their flags personalized.

The Massachusetts Department of Transportation has given Ms. Harris permission to have the memorial at the rotary starting on Sunday, May 2. As of right now, it will be in place through at least June 6, though Ms. Harris has been asked if she would like to have it there through the summer.

“When people go around the rotary, they can see the flags,” Ms. Harris said. “Families can drive by and see that their loved ones are being thought about and are not just a statistic.”

The Class of 2022 will not have to pass the MCAS test to graduate from high school, the state’s Department of Elementary and Secondary Education announced this week.

Passing the test as a graduation requirement had previously been lifted for the classes of 2020 and 2021 as well.

Instead of the test, these students will be able to show competency in core classes such as English and math in other ways including achieving course credits in those subjects. Juniors who wish to take the test this spring so that they qualify for the Adams Scholarship and the Koplik Certificate of Mastery will still be able to do so. They will also have the option to qualify by taking the test when it is offered as a retest in the fall.

Additionally, students in grades 3 through 8 who are in remote learning models will be able to take the test remotely.

All residents 16 years and older are now eligible to receive the COVID-19 vaccine in Massachusetts.

Demand is still expected to outweigh supply when it comes to vaccine doses and residents are urged to remain patient as the rollout continues.

Available appointments can be found at www.maimmunizations.org. All Cape Cod clinics will be listed at this site as they become available.

Residents can also preregister for a vaccine at www.vaccinesignup.mass.gov.

By preregistering, residents will be notified by their preferred contact method when they are able to schedule their first dose.

Residents are advised that if they are willing to travel off-Cape, their odds of securing an appointment may be better.

Retail pharmacies including CVS, Walgreens and Stop & Shop will be offering appointments to all eligible residents as well.

The New England Journal of Medicine released the results of a small study this week that suggests that fully vaccinated people have strong, but not complete, protection against the virus.

The study tracked 400 people who have been vaccinated against COVID-19. Of those people, two women tested positive for the illness. Those women both had mild cases of the disease and have recovered.

Vaira Harik, interim director of the Barnstable County Department of Human Services, said this is a rate of about half a percent.

She said that becoming infected after getting vaccinated has always been a known possibility.

“The likelihood exists, but it is very small,” she said.

While the chance of becoming ill after being vaccinated is minimal, she again reiterated the importance of continuing the follow then pandemic tenets that have been repeated for the past year and a half: Wear a mask, wash hands, maintain social distancing.

During the last week, 263 Cape Codders have been diagnosed with COVID-19.

This is down from last week, which saw 361 new cases of the virus in the county. As of this week, the infection rate in Barnstable County has decreased to 4.34 percent.

Officials say this means the region is on the other side of the most recent wave of the virus.

“We are gratified to see the DPH reporting on a 14-day moving average basis that our case rate is dropping below 5 percent,” Ms. Harik. “This is wonderful news.”

Hospitalizations are also down from last week, with 18 people being treated for the virus in area hospitals, compared to 27 last week.

A report from the Massachusetts Department of Public Health released yesterday indicates that 59 percent of Cape Codders have received at least one dose of a vaccine and 41 percent are fully vaccinated.