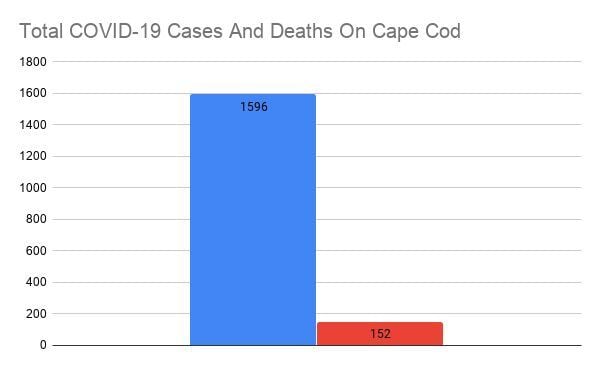 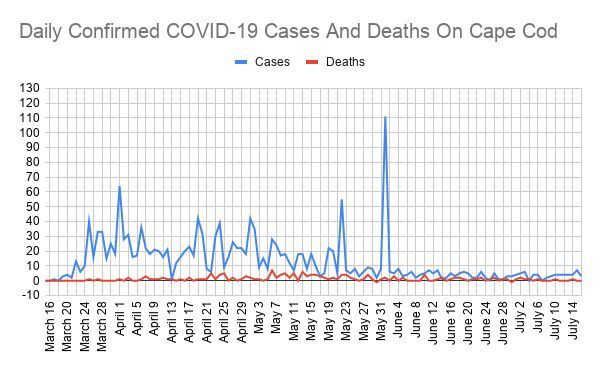 The average daily increase of COVID-19 cases on Cape Cod has risen over the past week compared to the week before.

The increase also applies at the state level, with an increase of about 18 cases per day statewide this week compared to the week before.

Even though the average number of daily cases has increased, it has not be a big enough jump to call it a spike, officials said.

There has been a marked influx of visitors coming to Cape Cod since Memorial Day weekend, but that does not appear to have impacted the health data in the region based on data released by the Massachusetts Department of Public Health.

Since the start of Memorial Day weekend, there have been a total of 391 cases of the disease reported in Barnstable County. This figure includes a large increase on June 1 of 111 cases due to the inclusion of probable cases dating back to March. Even with that increase, there has been an average of seven new cases daily of COVID-19 reported in the region since that weekend.

A total of 53 people have died of the disease on the Cape since the start of the tourist season.

Crowds On Beaches A Concern For Falmouth Officials

During a news conference Thursday, July 16, state Senator Julian A. Cyr (D-Truro) said several cases of the illness have been reported among restaurant workers in Harwich and Provincetown. He said he is specifically concerned about indoor dining when it comes to the spread of the disease.

As far as why there has not been a major spike in cases this summer, Sen. Cyr said there is no definitive reason why Cape Cod and New England have been faring better than other areas of the country. Among possible factors he noted that the state has been reopening slowly.

Additionally, he said there is a possible cultural factor of summertime on Cape Cod drawing more people to participate in outdoor activities such as going to the beach and choosing restaurants that have outdoor options. The risk of transmission is lower in outdoor spaces, health experts say.

The senator said he has noticed that nightlife on the Cape has been more subdued this season, too. Commercial Street in Provincetown during a typical season is busy past midnight but has been quiet earlier in the evening, Sen. Cyr said.

Sen. Cyr added that area residents and most visitors have been mindful of the health and safety advisories and are diligent about wearing facial coverings in public as well as maintaining social distancing.

All of these factors might contribute to the numbers being as low as they are, the senator said. A spike is not yet out of the question, though. Sen. Cyr said the Independence Day weekend on the Cape was a busy weekend and that people infected during the holiday might not be symptomatic yet.

“I’m cautiously waiting to see what those numbers look like,” he said.

Governor Charles D. Baker Jr. said at a news conference Wednesday, July 15, that he had concerns about changes made this week at the federal level pertaining to how COVID-19 data is collected and disseminated.

President Donald J. Trump’s administration ordered that hospital data related to the illness be sent to the Department of Health & Human Services instead of first being sent to the Centers for Disease Control and Prevention.

“The CDC has been the sort of source of truth, for lack of a better word, around what’s going on with regard to a lot of these issues for a long time. I think many of us believe that that is in fact where that data should be gathered,” the governor said, adding that the change will make it difficult to know exactly what the truth is when it comes to the COVID-19 data.