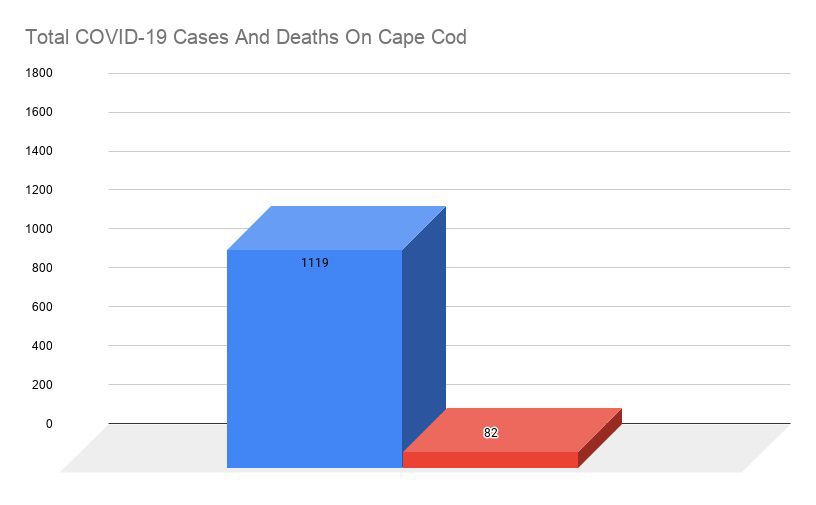 This graph shows the daily new cases of COVID-19 on Cape Cod since the first reported case in March.

Despite the coronavirus being a continual presence on Cape Cod, many towns are looking at what operations will look like once restrictions on businesses and social gatherings are lifted. The state is expected to offer some guidance to this effect next week.

A task force from varying sectors such as town administration and representatives from local businesses have developed their own task force that will operate using guidance from the state.

Meanwhile, people are working to ensure that people are still able to eat during this time.

At a news conference on Monday, May 11, Governor Charles D. Baker Jr. outlined the state’s plan for a phased reopening of businesses. The reopening would take place in four phases and will potentially begin on Monday, May 18, as long as certain metrics such as newly reported cases of the disease, hospitalization rates and death rates remain in a downward trend.

COVID-19 Numbers For This Week

Any business that is able to reopen will be required to adhere to strict standards—many of which are already in place—such as limits to the number of people allowed in a business at any given time as well as face mask requirements.

The four phases are as follows: Start, which would see the reopening of businesses and industries that already have limited face-to-face interactions; Cautious, industries with more face-to-face interactions would be able to reopen; Vigilant, restrictions from earlier phases could be loosened; and New Normal, at which point treatments or vaccines might be available, allowing for life to return to some version of normal.

Gov. Baker did not outline exactly which industries would be included in each phase and he is not expected to do so before Monday.

Additionally, he said that information will also be given on Monday about school graduations and what next fall might look like for students.

A task force consisting of a team of regional legislators, county officials, business leaders and healthcare administrators on Cape Cod has been organized to help provide clear guidance on how the region can safely begin opening up parts of the economy. The task force is also meant to provide a voice regarding the seasonal concerns that are unique to the Cape.

During a news conference Thursday, May 14, Senator Julian A. Cyr (D-Truro) said that they are looking for guidance from the state before they start to develop their own plans regarding which industries will reopen and when. Sen. Cyr said that Monday’s announcement from the governor will be a “big day with further guidance and clarity.”

Members of the public are invited to share their comments with the senator through his website. He has received more than 200 comments to date, which reflect concerns about the Cape’s economic stability as well as safety from a public health standpoint.

As the year inches closer to summer, towns on Cape Cod are working on plans to safely open up facilities to residents and tourists.

Sean O’Brien, the director of the Barnstable County Department of Health and Environment, said in a news conference May 14 that COVID-19 testing is going to be very important as summer arrives. Additionally, he said that there would also have to be increased surveillance in terms of keeping watch on what the pandemic is looking like in the areas where tourists live.

Sandwich Marina Set To Reopen To Boaters Next Week

“Do I think we can have a summer? Absolutely,” he said. “If we take care to make sure we use [personal protective equipment] and social distancing. All of the guidelines we make are going to play an important role in this. It’s going to be a very long summer path, but we’re going to make sure that we can stay on top of the data.”

In Falmouth, one consideration is what new regulations may have to be in place for the town’s beaches. The Falmouth Board of Selectmen discussed the topic at their Monday meeting.

While the board expects that Gov. Baker will provide some statewide guidelines, chairwoman Megan E. English Braga suggested that the town may want to implement different rules for different beaches. Among the considerations are adding police detail, extending the hours that parking attendants work and managing the size of gatherings that would be allowed.

Keeping the beaches open for the summer was favored by the board and by Health Agent Scott McGann, who said that outdoor activities are the “least risky” when it comes to spreading the coronavirus.

No firm decisions have been made and the board will continue the conversation at their June 1 meeting.

Officials in the towns of Sandwich and Falmouth discussed the possibility of allowing restaurants to expand outdoor seating options temporarily once dine-in service resumes. Occupancy will likely be required to be at a reduced rate.

Sandwich Fire Chief John J. Burke said that he wants restaurants in town to have the ability to recover financially as best as they can offer.

Both Falmouth and Sandwich are looking at allowing establishments to set up seating in their parking lots. Chief Burke said that some sort of fencing would likely be required so that people can not walk into the dining area or leave the premises with alcohol.

No final decisions have been made in either town, and it is unknown when people will be able to sit down at a restaurant.