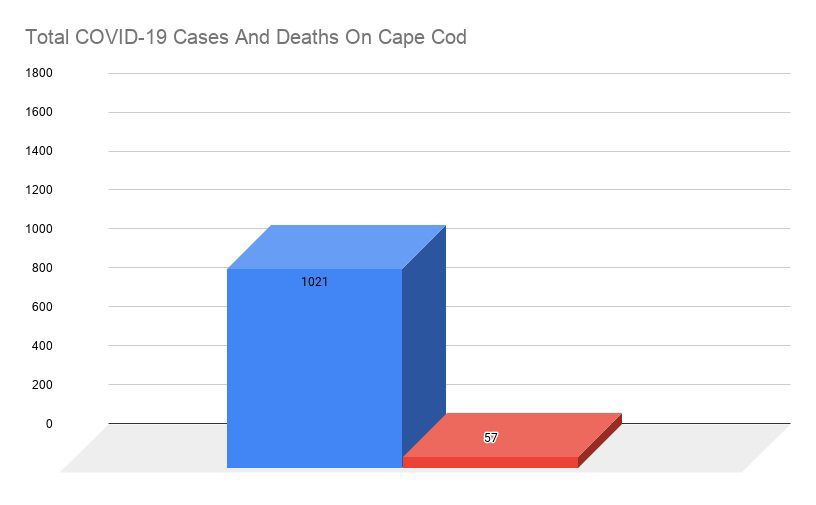 This graph shows the daily new cases of COVID-19 on Cape Cod since the first reported case in March.

Across Cape Cod this week, the numbers regarding new COVID-19 cases, deaths and hospitalizations have remained fairly steady in comparison with previous weeks.

The situation continues to evolve, as do the guidelines that residents are expected to follow. This week there is a new mandatory mask order to follow, but there are going to be some re-openings, such as golf courses and gun shops.

School districts continue to work on developing their remote learning platforms, and many are trying to determine how they will celebrate their senior classes while there are bans on large gatherings in place.

Governor Charles D. Baker Jr. mandated that most Massachusetts residents wear a mask while in public spaces as of Wednesday, May 6. The order does not apply to residents under age 2, nor does it apply to people with health conditions that would make wearing a mask dangerous.

Masks must be worn in places when social distancing is not possible. That includes grocery stores, pharmacies, retail stores, and while on public transportation.

Not wearing a mask could lead to a $300 fine, which is to be enforced by local health agents.

The field hospital that was opened at Joint Base Cape Cod is no longer being staffed as of Tuesday, May 5. The hospital was in operation for less than a month, having opened in a converted gymnasium on the base on April 20.

Cape Cod Healthcare president and chief executive officer Michael K. Lauf said that none of the beds at the facility had been used, since the hospitals in the area never reached surge capacity. The facility was designed to hold 125 to 150 beds.

The facility was opened due to projections that Cape Cod would be hit by the coronavirus pandemic especially hard. Those numbers never came to fruition, which Mr. Lauf said was due to residents taking the precautions and advisories seriously.

COVID-19 Numbers For This Week

Even though the facility was never used Mr. Lauf said that, based on the projections, opening it in the first place was the right call.

Experts in the area of child welfare suspect that the number of cases of child abuse may be higher than is currently being reported.

With a stay-at-home order in place and school buildings closed, there are children who are potentially stuck at home with their abusers. Under normal conditions, teachers are able to report when they suspect that a child is the victim of abuse. With schools closed, teachers have lost the day-to-day contact with their students.

Children’s Cove president Stacey Gallagher said that the number of reports of child abuse have decreased. There is usually a dip in reporting during summer months when school is not in session;the extended school closure is having the same effect.

Anyone suspecting that a child might be the victim of abuse should contact the Department of Children and Families Child-at-Risk hotline at 800-795-5200. Reports can be made anonymously.

Federal Judge Douglas P. Woodlock has issued a preliminary injunction that prevents the state from forcing the closure of gun shops during the pandemic.

Gov. Baker had not included gun shops on the state’s list of essential businesses that could remain open. This decision was challenged by the National Rifle Association and the Gun Owners’ Action League, calling it a threat to Second Amendment rights.

Per Judge Woodlock’s injunction, the state will be required to allow gun shops to reopen by, Saturday, May 9. Guidelines regarding their reopening is expected to be issued before that date.

The Buzzards Bay Swim fundraiser event that was scheduled for June has been canceled due to the coronavirus pandemic. The event has been held annually since 1993 and draws hundreds of swimmers to swim from New Bedford Harbor to Fort Phoenix State Park in Fairhaven.