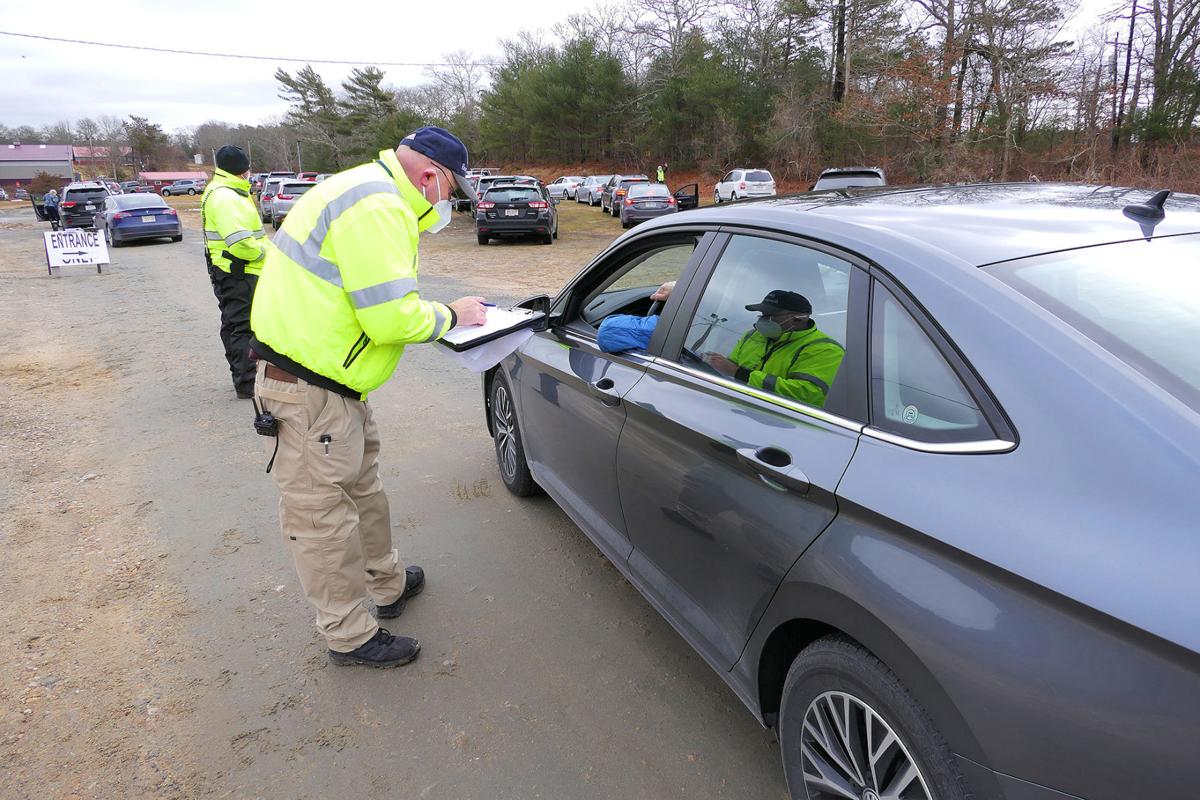 Mel Trott checks people in at the Cape Cod Fairgrounds and verifies their appointment time to receive the COVID-19 vaccine Wednesday afternoon.

Thousands of Cape Codders tuned in to a phone call this week where local officials discussed the COVID-19 vaccine.

The call was geared toward residents over the age of 65 and covered vaccine access as well as the science behind the vaccine.

Phase Two of the state’s vaccination plan began this week, with hundreds of Cape Cod residents age 75 and older receiving their first dose of the vaccine at the Cape Cod Fairgrounds and Melody Tent sites.

Across the state, people are getting sick at a declining rate. This data has led Governor Charles D. Baker Jr. to announce that some capacity restrictions will be eased starting next week.

While January was a particularly dire month for Cape Cod in terms of new COVID-19 cases and deaths, officials say the region is starting to see the other side of the second wave of the pandemic.

On Wednesday, February 3, Barnstable County officials placed calls to residents to join a telephonic presentation about the COVID-19 vaccine.

At the peak of the call, more than 13,000 individual phone numbers were connected to the call, and state Senator Julian A. Cyr (D-Truro) estimated that about 18,000 individuals were listening in.

During the call, local officials discussed the availability of the vaccine and shared some details about the science behind the vaccine.

Sen. Cyr said there remains a lack of vaccine doses coming to the Cape but that he sees this as a temporary obstacle to getting residents vaccinated.

“This has been a challenging 11 months, and we want to be honest that it will remain challenging for some time,” he said. “We are hopeful that we will see improvement as we get more vaccine on Cape Cod.”

Michael K. Lauf, chief executive officer of Cape Cod Healthcare, said more than 75 percent of his workforce has received both doses of the vaccine and an additional 10 percent are waiting on their second dose.

Additionally, he said the organization had about 2,000 first-dose shots left over from Phase One that were given to Cape Cod Healthcare patients during a clinic held at the Melody Tent this week.

Patients were invited directly by Cape Cod Healthcare, and Mr. Lauf said they started with patients over the age of 90 with more than one underlying condition.

“We did it to ensure that people got the vaccine,” he said. “As we get more vaccine, we will do whatever we can to vaccinate people.”

Cape Cod Healthcare senior vice president Dr. Kevin Mulroy went into detail about the science behind the vaccine to explain why it is a safe vaccine.

He said the vaccine was created using new technology, which has resulted in a vaccine that does not contain any live, deactivated or attenuated virus. This is called an mRNA vaccine.

Dr. Mulroy used the analogy that DNA is the architect and mRNA is just the blueprint.

After receiving the mRNA vaccine, cells are basically given the instructions on how to create a piece of the COVID-19 protein. This triggers an immune response, essentially teaching the immune system how to fight off the virus.

The second dose of the vaccine acts as a booster.

Dr. Mulroy said the vaccine itself is very fragile but very safe. Both the Pfizer and the Moderna vaccines have been found to be 100 percent effective at preventing severe illness as a result of the virus.

He said that with the vaccine, he is hopeful Cape Cod will be able to reach “herd immunity” sometime over the summer. He said about 70 percent of Cape Codders will have to be vaccinated to achieve herd immunity.

Addressing frustrations at the lack of vaccine supply, assistant commissioner of the Massachusetts Department of Public Health and director of the Bureau of Infectious Disease and Laboratory Science Kevin Cranston said the state is working with local officials to make sure that the infrastructure is ready to go when the vaccine supply becomes available.

“With patience, coordination and trust we’re all going to get through this together,” he said.

Sean O’Brien, director of the Barnstable County Department of Health and Environment, said there are about 1 million residents in Massachusetts who are over the age of 75, which means that about 2 million doses of vaccine will be needed to fully vaccinate them all. Currently, the state is receiving fewer than 100,000 doses each week.

Of those doses, Barnstable County sees about 975 weekly.

He said people will be able to sign up at www.barnstablecountyhealth.org for email notifications about 24 hours before vaccine clinic registrations open up.

“Signing up for an email notification does not guarantee you an appointment,” he cautioned.

Erika Woods, deputy director of the Barnstable County Department of Health and Environment, said no adverse reactions occurred at the fairgrounds that required medical attention, and only 15 people showed up without an appointment and were turned away without incident.

Representative Sarah Peake (D-Provincetown) said the state is working on a hotline for residents to call for vaccine information. Additionally, she said people who own second homes on the Cape will be able to get the vaccine when their turn comes in the rotation along with permanent residents.

He said the county will be working to ensure that those people receive the help they need.

Citing declining rates of infection, Gov. Baker announced Thursday that more people will be allowed into businesses starting next week.

Capacity in many businesses and industries will be increased from 25 percent to 40 percent, effective on Monday at 5 AM.

The announcement about gathering limits coincides with Super Bowl Sunday coming up this weekend.

In regard to the football holiday, Gov. Baker reiterated the same advice he has for every other holiday this past year—it is risky behavior to spend extended periods of time indoors with people who are not immediate household members.

January on Cape Cod was a dramatic month for the pandemic with 3,307 newly reported cases of COVID-19 and 104 related deaths.

These were the highest numbers in a single month to date.

However, officials have indicated that the rate of new cases and deaths have begun to decline, signaling that the region is on the other side of the surge that began after the Thanksgiving holiday.

Vaira Harik, deputy director of the Barnstable County Department of Human Services, noted that while case increases, deaths and hospitalizations are on the decline, the number of ICU hospital beds is still higher. The most recent data indicates that 17 ICU beds are occupied by COVID-19 patients, she said.

“That is a concern,” she said. “There are very ill people there.”

In February so far, 307 cases of COVID-19 have been identified, and four people have died from the virus.

Sandwich remains in the highest risk category and is highlighted in red while the other three Upper Cape towns are all higher risk, or yellow.

For more information about the COVID-19 pandemic, including up-to-date case numbers and links to valuable local resources, visit www.capenews.net/coronavirus.