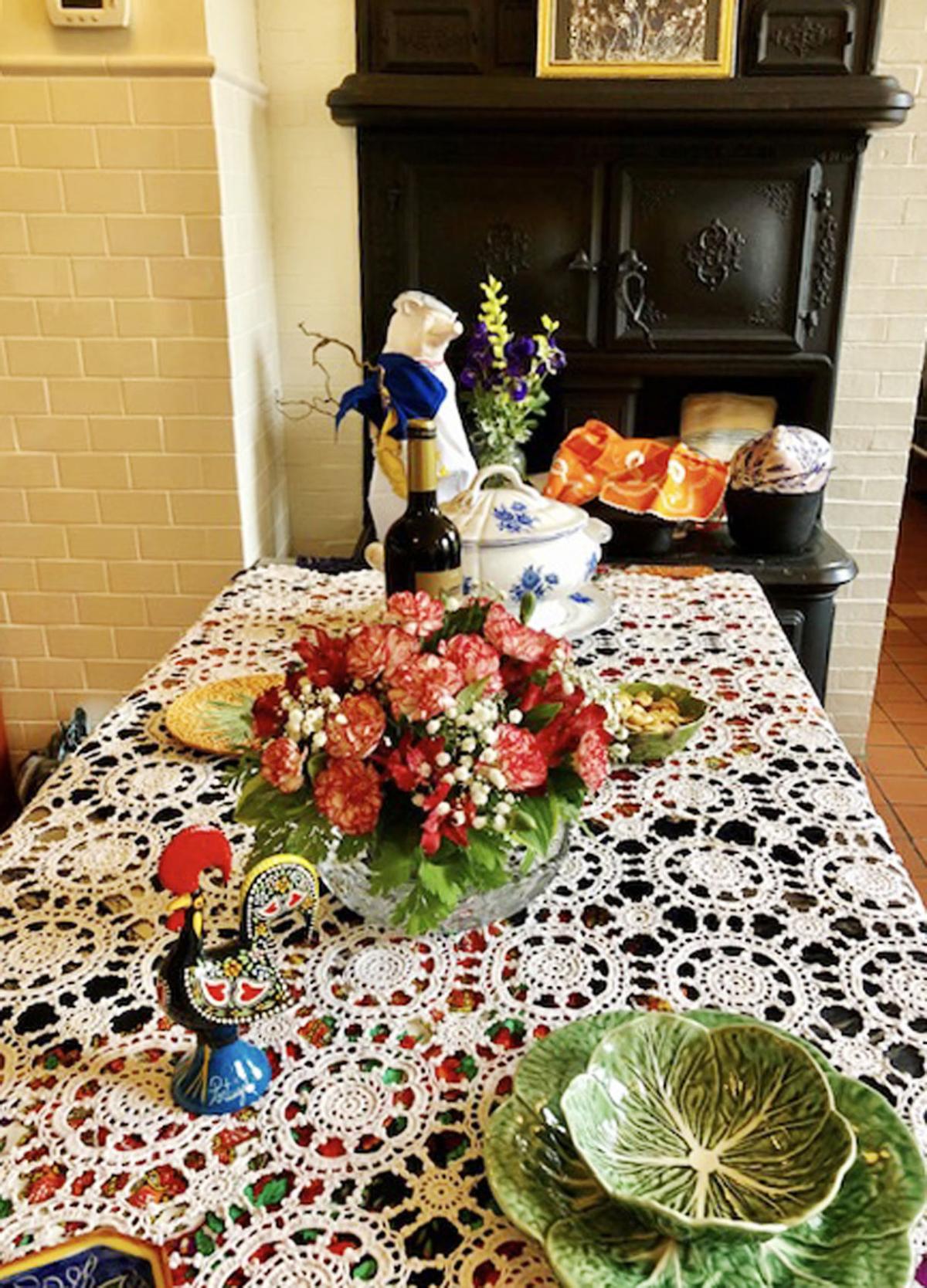 The table in the pantry kitchen, set in Portuguese style 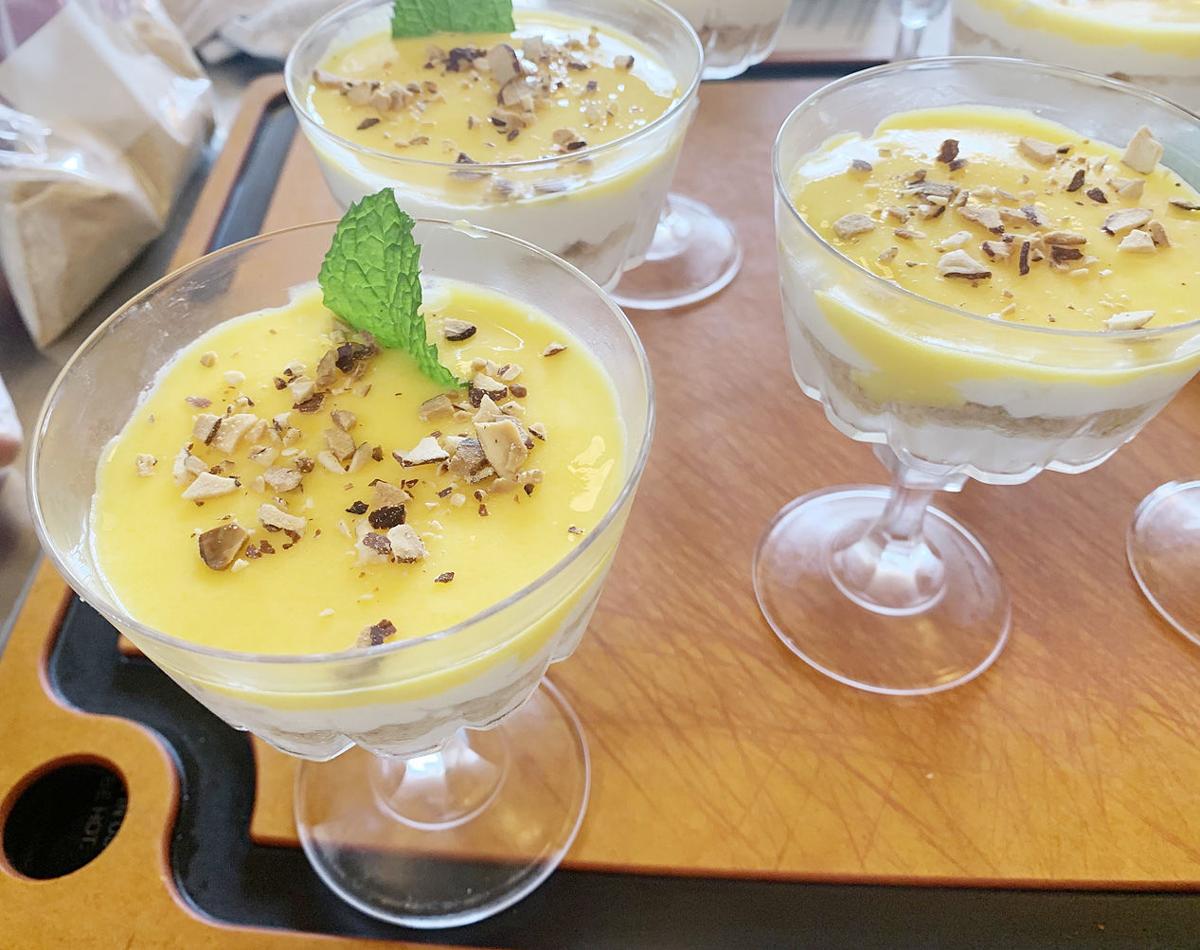 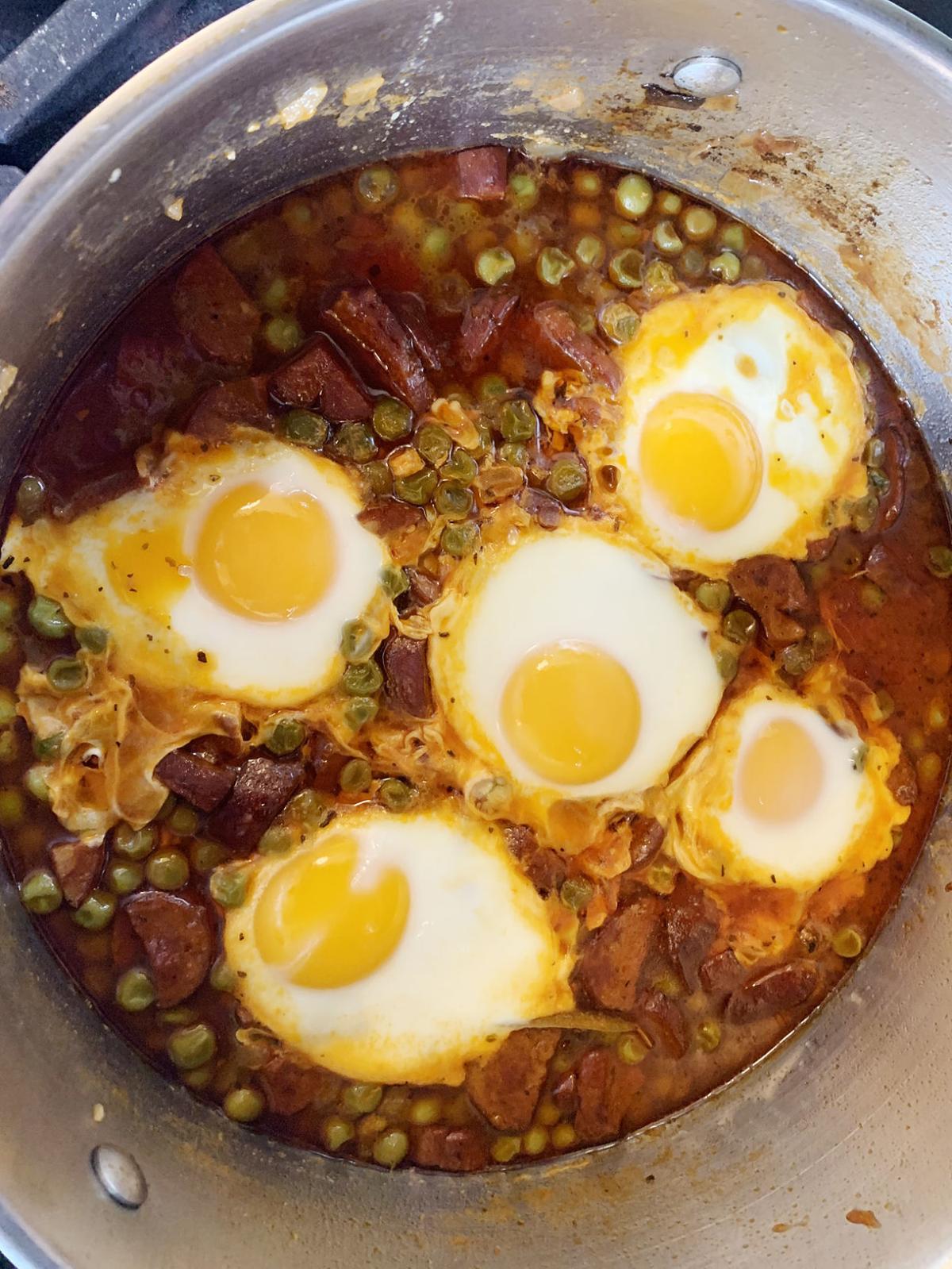 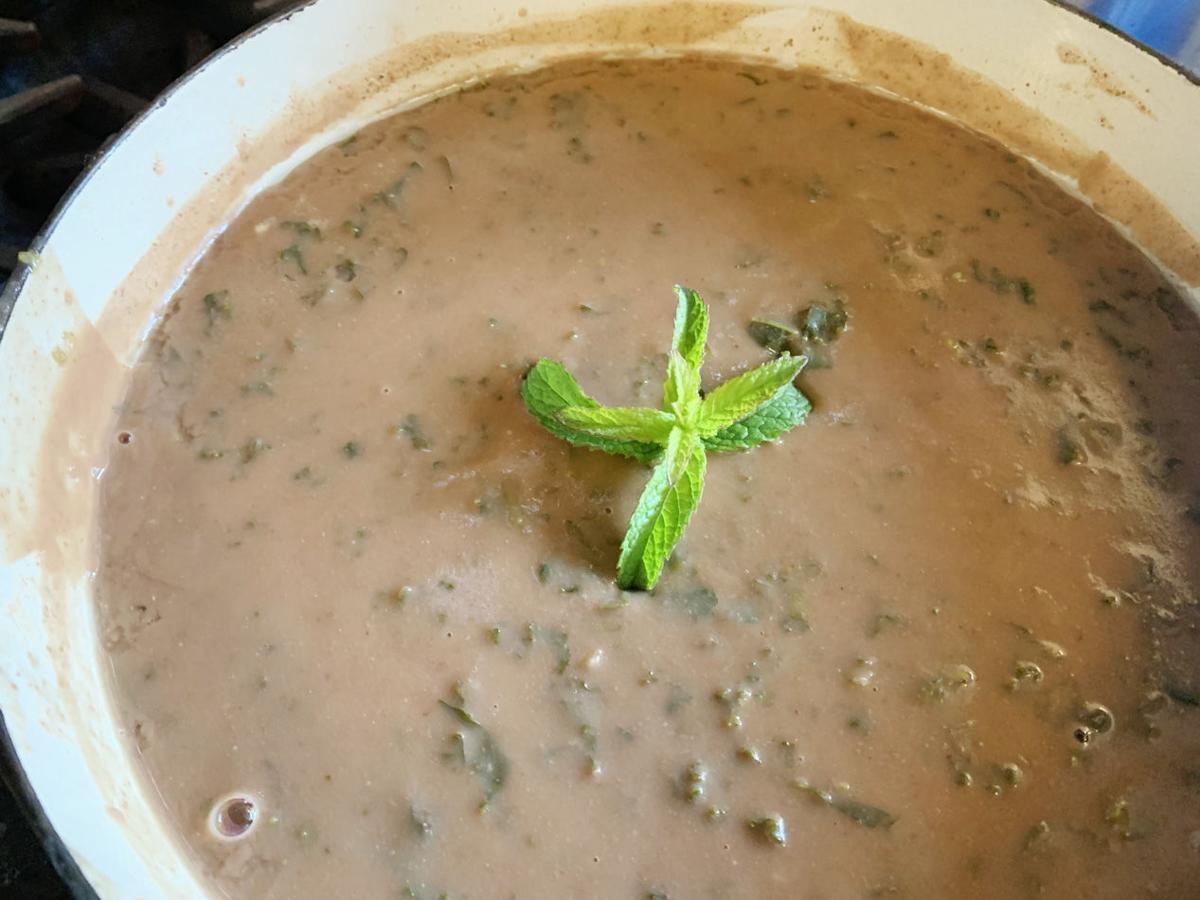 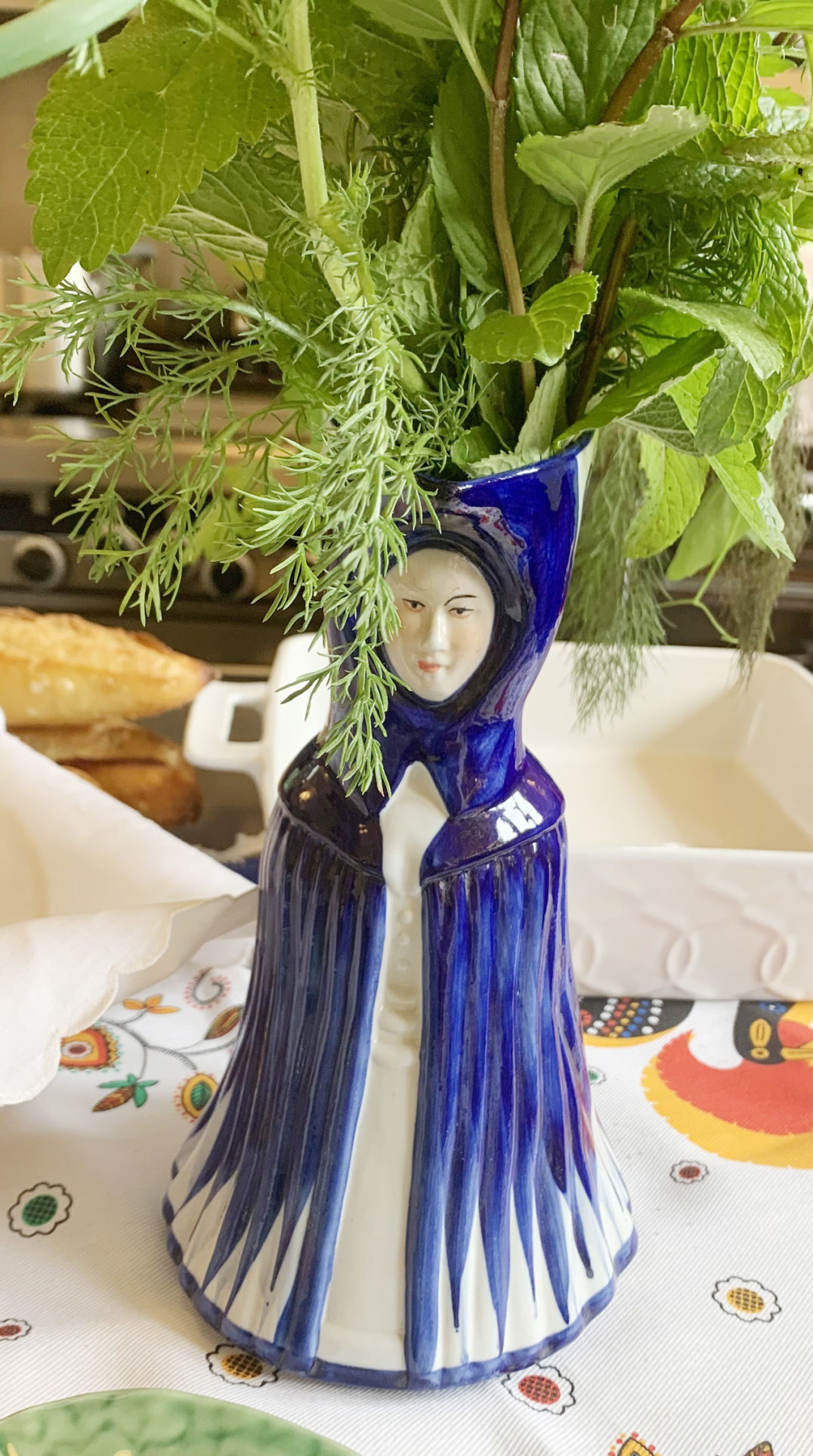 The lady in her hood 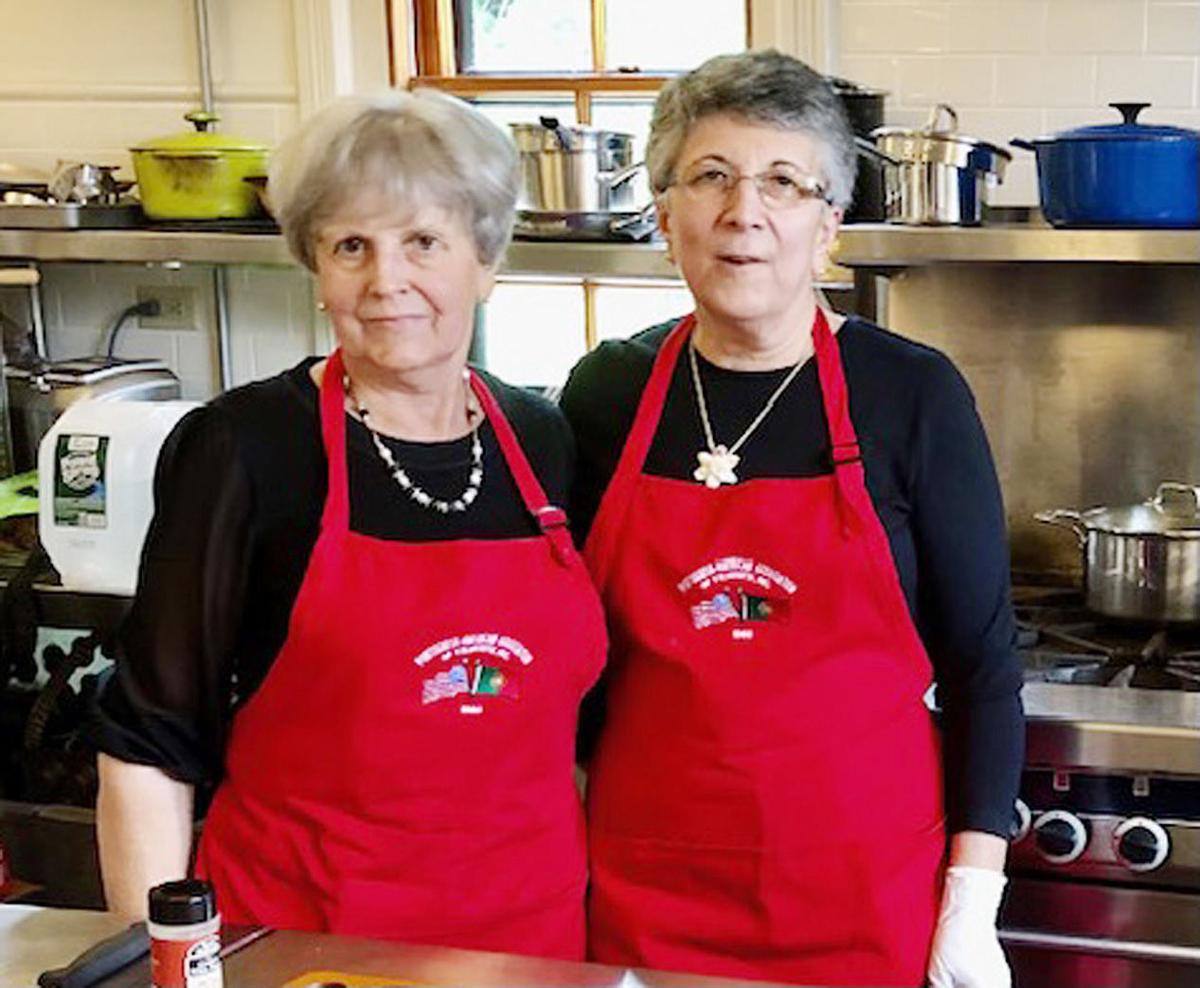 The table in the pantry kitchen, set in Portuguese style

The lady in her hood

Last week, when Isabel Melo and Alda Baron came to Highfield Hall, they taught us much more than recipes for Portuguese comfort food. We learned about Presidents Kennedy and Johnson, and the Immigration Bill of 1965, which stated: “… that from this day forth those wishing to immigrate to America shall be admitted on the basis of their skills and their close relationship to those already here.”

And we learned about the Catholic community of Falmouth (with three parishes and two chapels), along with the recent burst of work that went into Mary’s Garden in Woods Hole. The garden, which still needs care, according to Isabel, is located across from St. Joseph’s Chapel (the oldest Catholic church on Cape Cod) which The Most Reverend Edgar da Cunha, bishop of Fall River Diocese, visited on May 1st of this year.

Then there was the “capote,” the lady with the hood. “At the turn of the century all the ladies wore capes with hoods to church,” Alda told us. “It was very windy in the Azores. The capes were made of navy blue or black merino wool, and not everyone could afford them.” She gestured toward the pitcher she brought to class (which was filled with herbs from her garden)—and there she was, the lady with the hood.

We also learned about “cooking from the heart,” as the sisters showed us how to make incredibly flavorful dishes from rather simple ingredients. But back to the Immigration Bill: Isabel explained how one needed to be sponsored in order to come to this country in the late 1960s. “We came from Pico, an island in the Azores,” she said. “There was a volcano that erupted, so our uncle petitioned us to come here. I came first, on February 22nd, 1988, and Alda came later that year, on October 4th.”

They originally settled in the Boston area; now Isabel lives with her husband in Falmouth Heights, and Alda with her husband in Pocasset. Their families are grown, but still spend much of their time here. Both ladies have been very active at Highfield over the past few years, and I consider us fortunate to have gotten them to teach a class in our Ethnic Cooking Series.

This was the first time they were teachers, Isabel told us. “The hardest part of teaching is writing down the recipe—because that’s not how we cook. We don’t measure. I’m so used to cooking for eight that I still make most meals in a big pot,” she added, laughing, as they prepped the red bean and kale soup. “Here we are using the basics of Portuguese food: onions and garlic.”

Alda chopped away, telling us that she prefers Vidalia onions (“easier on the eyes”), and also makes this soup with butter beans or chickpeas. She said her mother always used white pepper, so that’s what she added to the soup. “And it doesn’t need to be kale,” she suggested. “It can be watercress or arugula—or even spinach. Just make sure it’s very thinly sliced. That’s how we knew when a young woman was ready for marriage—when she was able to slice the kale ever so thin!”

The soup was garnished with mint leaves (“for internal gas control”, Alda explained). The next dish was spring peas with chouriço. “Sometimes you can find frozen fava beans in the market,” Isabel stated. “They are good in this instead of peas. And I like to use Chili Garlic Sauce--a Thai ingredient, instead of the Pimenta Muida, which is Portuguese, but very, very spicy.” They brought chouriço with them, from Portugalia, the marketplace in Fall River.

Dessert was indeed heavenly. Natas do Ceú means heavenly cream, and it did not disappoint. A sort of Portuguese trifle, the dish was made with a custard mixture layered with crumbled Bolacha Maria, a rich tea biscuit available in the Portuguese section of our supermarkets. Serving it elegantly in parfait glasses, Alda topped it with slivers of toasted almonds—and added a sprig of mint from her garden.

This was certainly one of the more illuminating classes we have had at Highfield. I hope we can get these generous, and entertaining sisters back again to take us on another virtual trip to Portugal. Meanwhile, here are instructions for the dishes they prepared.

1 large onion diced, about one cup

Wash, pick through and soak beans overnight. Place soak beans into medium-size pan, cover with water and cook for about one and a half hours; empty them into a bowl. Wipe the pot and add the oil; heat over medium-high heat and sauté the onion until translucent. Add the bay leaf and the garlic and sauté until fragrant. Add the cooked beans and cover with the stock. Bring to a boil and simmer for 10 minutes. Remove bay leaf and puree the soup with an immersion blender. Add stock to achieve the consistency desired. Or, you can pass the bean mixture through a sieve to remove skins. Return the puree to the same pot and add the kale and simmer for half an hour, stirring and scraping the bottom of pan frequently to prevent burning. Serve with crusty bread.

Note: To make it a hardy meal, add cooked barley when adding the kale. Options: Instead of kale you might use spinach, watercress or arugula—it cuts the cooking time, and it is equally delicious.

6 cups of fresh or frozen peas

4 to 6 cups of chicken stock

Add peas along with enough stock to cover peas; bring to a boil and simmer for 20 minutes. Season with salt and pepper to taste. Lastly, add the eggs and poach for about 4 to 6 minutes. Serve with crusty bread.

Note: You might choose hot or mild chouriço—depending on your taste. Option: Finish your dish with either fresh chopped parsley or coriander.

Whip heavy cream till firm; fold in condensed milk and set in the refrigerator. In a small pot mix water, sugar and egg yolks. Stirring constantly, bring the mixture to simmer until it thickens; remove from heat and let the mixture cool completely. Assemble

dessert by making (multiple) layers of the heavy cream mixture, cookie crumble and finishing with the egg cream.

Note: You may use toasted almond slivers, pieces of fruit, mint leaves or wedged cracker to top dessert.

Option: You may use a pretty glass bowl or parfait glasses for serving.