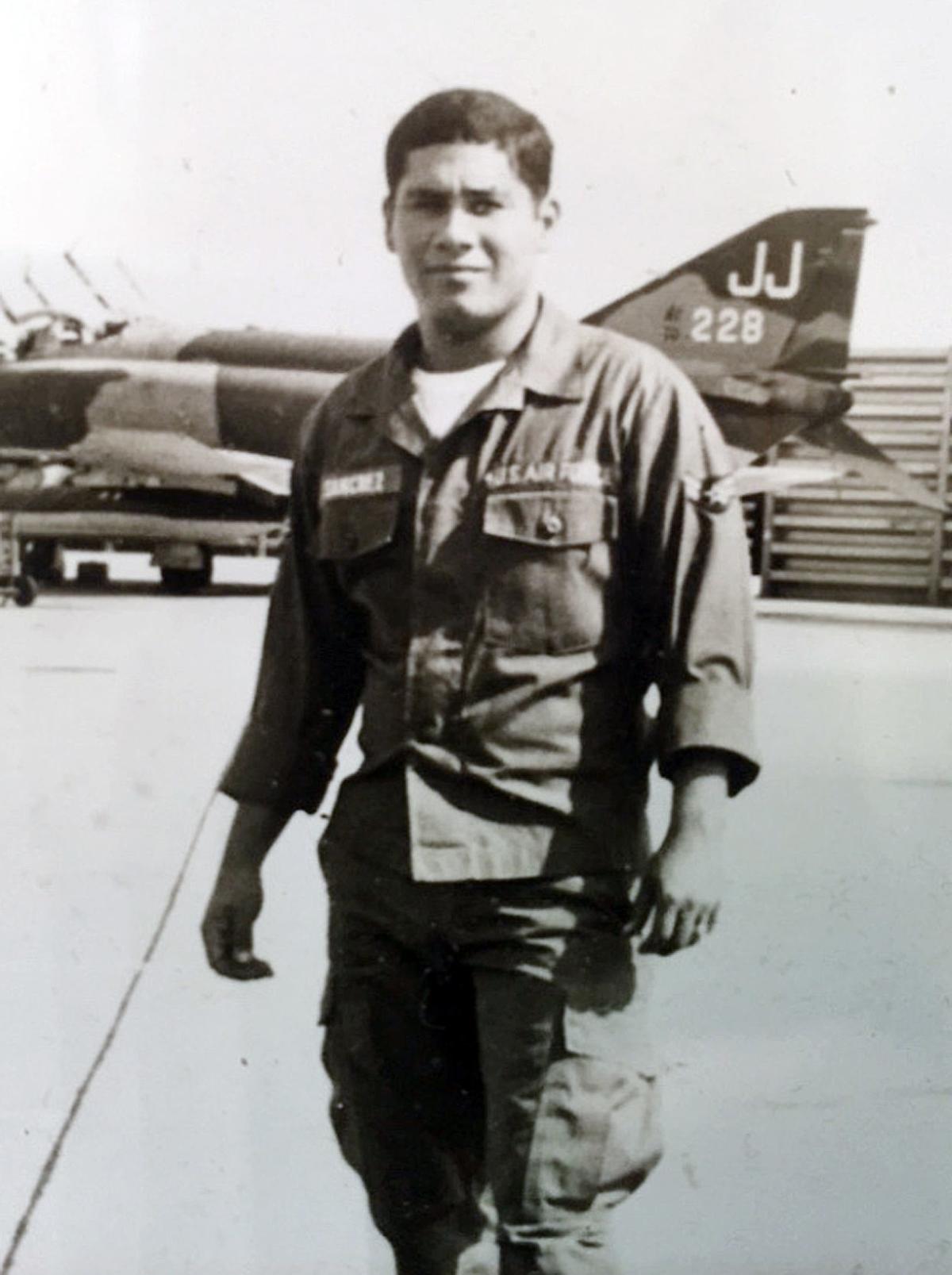 This week’s Veterans Spotlight feature subject enjoyed an amazing career in the armed forces. Chief Master Sergeant Frank Sanchez served his country in the US Air Force from 1968 to 1993. “I wanted to be in the service. My dad was a WWII Vet and first member of our family to serve. I was second. I still remember my service serial number. My brother Joe served in the Army and my brother David in the Marines,” he said, adding, “I came from a family that worked hard and never looked for or expected a pat on the back.”

When asked about being away for the holidays Chief Master Sgt. Sanchez said, “Every day was the same. Christmas Day we were loading 500-pound bombs on F-4E Phantom jets. The bombs were dropped to protect our guys on the ground…the Ground Pounders. Most people called them grunts. Had a lot of respect for those guys.”

I asked him about entertainment overseas. “I was in Thailand and Bob Hope brought his show to Camp Friendship. What it did for me is indescribable. It was hot as hell and we were out in the middle of nowhere. Mr. Hope gave us a great show that really lifted morale…shot morale up to a 10!” he said, still moved and enthusiastic about seeing the legendary entertainer.

I asked Chief Master Sgt. Sanchez what it was like to lose a pilot. He paused for a moment and offered this, his voice filled with emotion: “We lost three airplanes on missions. The Air Force, they never told you….you get to know the guy…then, they don’t come back…you personally take a step back and hope their family is able to cope with it…you don’t know if he’s a POW or he’s dead…it’s devastating and it’s something that you never forget but you have to deal with it and move on.”

Chief Master Sgt. Sanchez’s military career took him to air bases all over the world, including Pope in North Carolina; Reese and Bergstrom in Texas; Hurlburt Field and Elgin in Florida; and Sembach, Ramstein and Bitburg in Germany. Chief Master Sgt. Sanchez was stationed at Bitburg when the wall fell in West Germany in 1989. His unit also “supported” Air Force One in 1987, when President Ronald Reagan attended the Iceland Summit. He also recalled visiting the famous Checkpoint Charlie in 1977 in West Berlin.

Chief Master Sgt. Sanchez shared an unforgettable memory about his return home from the Vietnam War. “We came through San Francisco.…Everyone gave us dirty looks and made comments as we walked through the airport.…I never got into politics…I volunteered…you make choices in life and you live with them,” he said.

Chief Master Sgt. Frank Sanchez, thank you for your service to our great country.