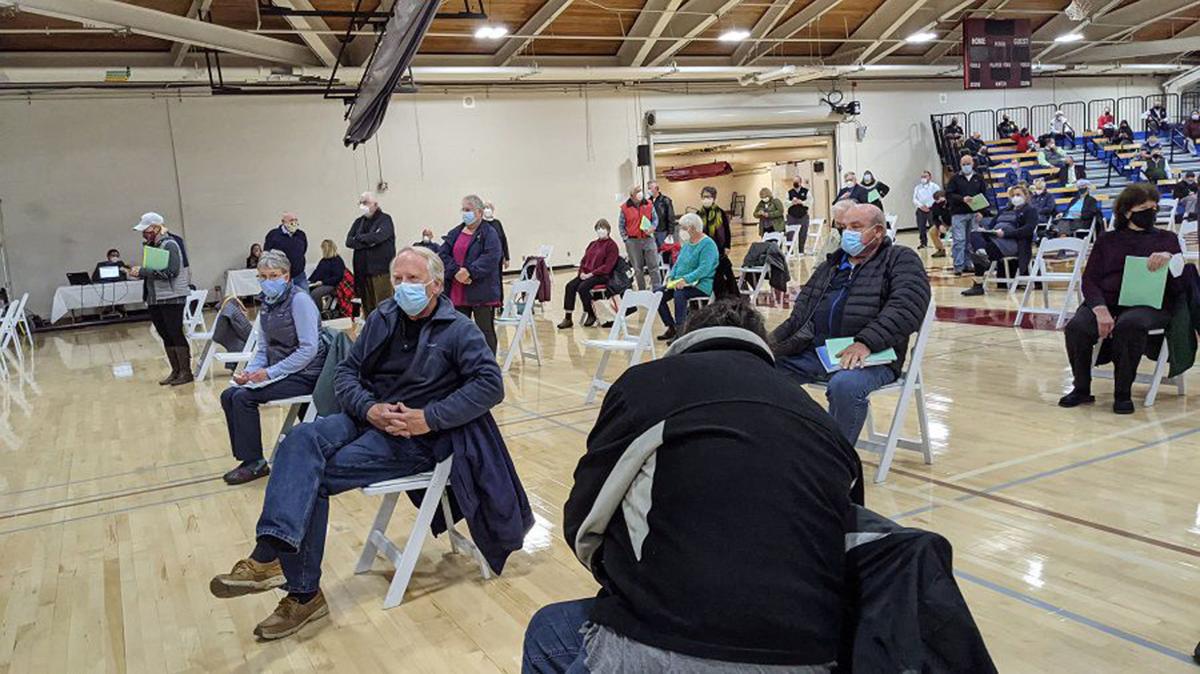 With a lack of a quorum, Falmouth Town Meeting members are in a waiting pattern. 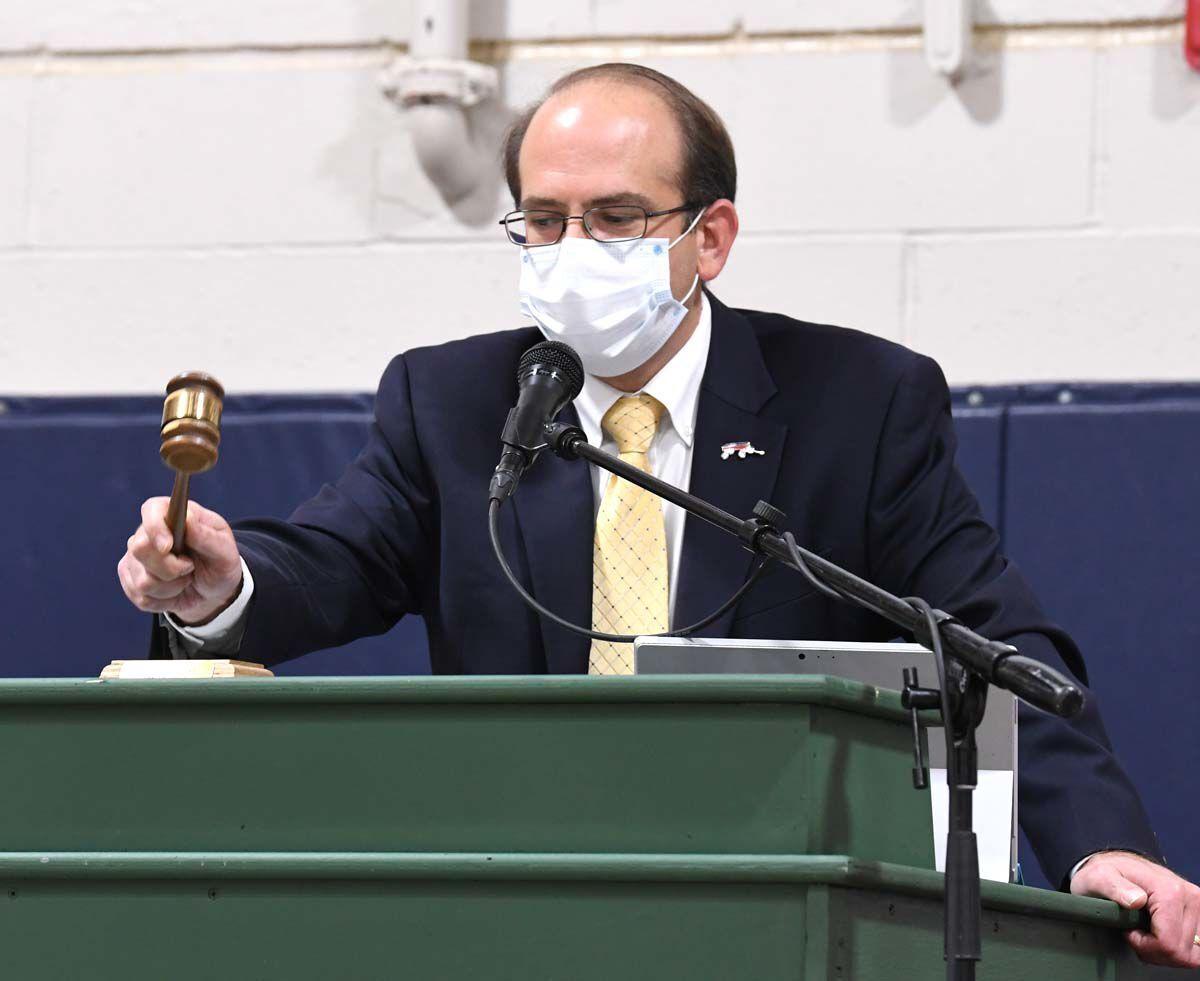 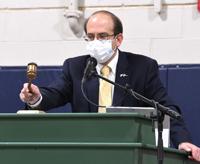 Moderator David Vieira declares there is no quorum.

With a lack of a quorum, Falmouth Town Meeting members are in a waiting pattern.

Moderator David Vieira declares there is no quorum.

After failing to meet a quorum of 124 members on Monday, November 16, Falmouth Town Meeting was adjourned until Monday, January 25, at 7 PM at the Falmouth High School field house.

“I don’t think there is any chance we will be meeting in person in January,” Select Board Chairwoman Megan E. English Braga said Tuesday.

Though COVID-19 case numbers are on the rise, Ms. English Braga said, the precautions taken would have allowed Town Meeting to proceed on Monday. With 113 members in attendance, Town Meeting was nine members short of reaching the quorum needed to conduct its business.

“I think we were obviously disappointed, but not completely surprised,” she said. “We had been tracking the number of excused absences.”

Fifty-two members had requested an excused absence by last Friday. That number nearly doubled to 102 members by Monday.

“It was pretty steady throughout the week, but over the weekend and on Monday, we got a lot of requests,” Town Clerk Michael C. Palmer said.

Catherine O. Bumpus, Precinct One, requested an excused absence a week in advance. She watched the nonmeeting on Falmouth Community Television.

“I wasn’t surprised,” Ms. Bumpus said. “I knew there were a lot of emails asking about excused absences or finding other ways to participate.”

Although Town Meeting is exempt from Governor Charles D. Baker Jr.’s guidance of a 10-person limit on indoor gatherings, she said, the possibility for spreading the coronavirus through the large group remains.

“I think we need to either have another outdoor meeting or a virtual meeting, given the age of Town Meeting members and all of the health concerns,” Ms. Bumpus said.

At least seven State House employees and lawmakers have tested positive for coronavirus since November 13. Though she praised Representative David T. Vieira’s skills as moderator, she noted that most Town Meeting members are older and at risk.

“Most of Town Meeting members, a lot of us, we’re just older than dirt,” Ms. Lichtenstein said. “We’re in that high-risk group.”

Though Precinct Two Town Meeting member Sandra L. Faiman-Silva attended on Monday night, she said the town administration should have planned for a virtual meeting.

Ken Buesseler, Precinct Two, sent an email to more than 200 Town Meeting members explaining why he sought an excused absence. In addition to a statewide increase in COVID-19 cases, the infection rate in Falmouth has nearly doubled from 2.3 to 4.4 cases per 100,000 residents per day since September.

“I’m disappointed that we have had little discussion since September about what we might do at Town Meeting to reduce COVID risks, including virtual or hybrid models, as successfully used elsewhere in this state,” Mr. Buesseler wrote. “By all estimates, this risk will still be with us for the April 2021 Town Meeting. Much of the discussion that I can find on this topic was at an Oct 5th BOS meeting, when improvements to the sound system at the high school and more careful microphone handling and mask wearing were discussed. But there seems to be no priority or urgency to consider other options than a large, multi-hour long, indoor gathering that has the potential to spread COVID-19 in Falmouth.”

Ms. English Braga said there was discussion prior to the November Town Meeting. Town administration attempted to mitigate the potential spread of the coronavirus by requiring all in attendance to wear masks, providing members with KN95 masks, enforcing social distancing, providing hand sanitizer and sanitizing the microphone between uses.

“Part of the reason we wanted to have it [Monday] night is because numbers are going in the direction we don’t want them too, statewide and nationally,” she said. “If the numbers continue to go in the direction they are, it wouldn’t make sense to have it in person in two months.”

In addition to the excused absences, several Town Meeting members did not show up on Monday. Attendance was further reduced by nine vacancies. Vacancies do not reduce the quorum of 124.

Ms. English Braga said there are some challenges with transitioning to a virtual Town Meeting. For example, Falmouth Town Meeting typically uses a voice vote to conduct its business. For a virtual Town Meeting, every vote would need to be a roll call vote. Town administration needs to evaluate which software best allows for recorded votes.

With 245 Town Meeting members, the number of people presents a challenge.

At least nine communities, including Lexington and Plymouth, have held virtual Town Meetings.

“Other towns have done it, and I’ve been saying it all along, we’re just as intelligent, if not more intelligent, than other towns,” Mr. Palmer said.

Though scheduled for January 25, if Town Meeting plans change, Mr. Vieira said, members will be notified via a declaration of continuance.

“We will continue to monitor the health situation going forward,” he said. “Looking at the trends in the region, we know if we just try to adjourn for a week or a few days, we won’t be able to meet the statutory requirements to do a remote meeting, and it would be futile to try to drag everyone back into here as things are not, quote-unquote, heading in the right direction.”

He thanked the 113 Town Meeting members who attended the Falmouth High School field house on Monday night, as well as the town staff members and department heads present.

Town Meeting was set to discuss nine articles, including $5.7 million in capital projects and $832,280 in noncapital expenses, six amendments to the Falmouth Town Charter, a transfer of land at the Mullen-Hall School from the school committee to the select board and authorization of a payment in lieu of taxes agreement for a solar array project at the Cape Cod Fairgrounds.

“I don’t think there was anything time sensitive, like last time,” Ms. English Braga said. “It is a delay, but I don’t think it will negatively effect our community in any substantive way.”