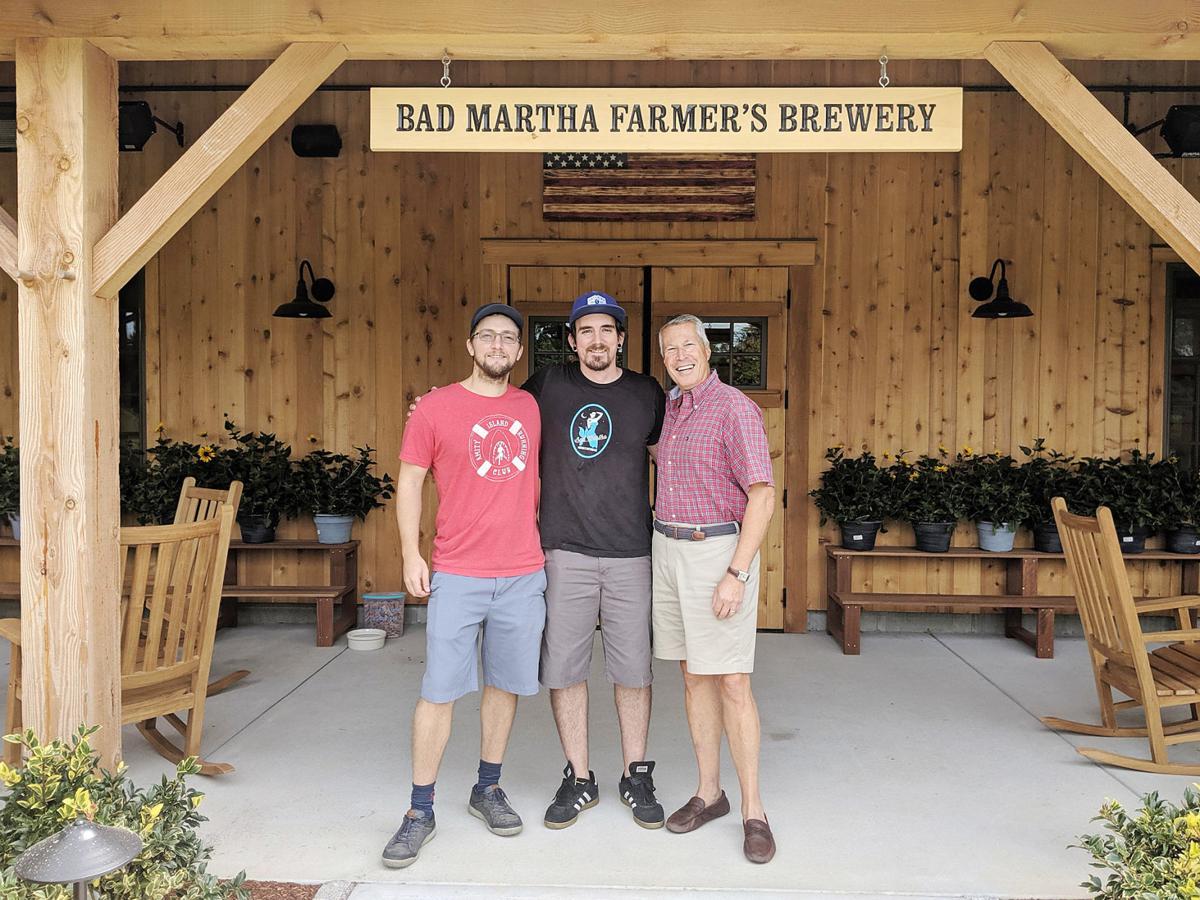 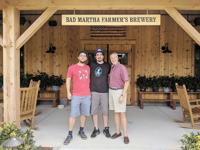 Bad Martha’s management team takes a break while preparing for the opening of Falmouth’s first-ever brewery. It is the company’s first location away from its Martha’s Vineyard home. The pole-and-barn structure is three times the size of its Edgartown predecessor. 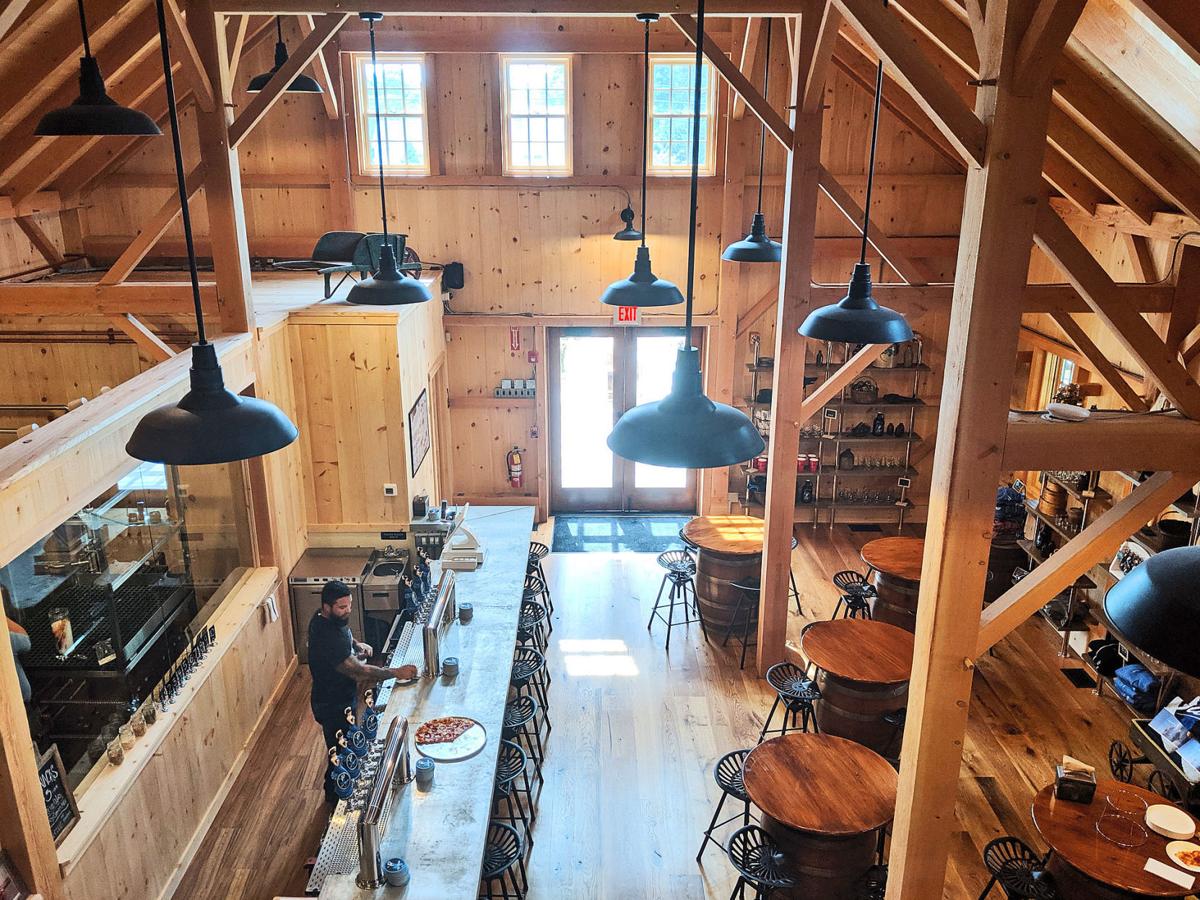 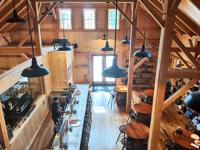 Bad Martha’s management team takes a break while preparing for the opening of Falmouth’s first-ever brewery. It is the company’s first location away from its Martha’s Vineyard home. The pole-and-barn structure is three times the size of its Edgartown predecessor.

Bad Martha Farmer’s Brewery, a pole-and-beam barn on Route 28 in East Falmouth, is the company’s first location away from its Martha’s Vineyard home.

Bad Martha’s general manager Joshua Flanders and master brewer Jacobi Reid were on site Thursday, September 5, working around the clock to get everything ready for the grand opening. Hours before the private, soft opening, the team was still working on finishing touches.

Every element of the new brewery has a story behind it. The barn that houses the brewing operation and taproom was designed by a Boston architect, constructed by members of the Amish community in Lancaster, Pennsylvania, and raised through a traditional barn-raising technique in Falmouth.

The building was then outfitted with insulation and a red cedar-shingled roof. A functioning grain silo along the street-facing side of the barn was designed and built in the Midwest before it settled into its new home in Falmouth. A blue mermaid, the signature mascot of the brand, was hand-painted onto the black background of the silo.

Even the wagon that greets customers as they turn into the parking lot has a backstory. It dates back to the 1870s, brewery owner Jonathan Blum explained. The barrel-wagon’s brakes still work and the green paint is original. He had it trucked in from Wisconsin.

Inside the barn doors, a cool-gray bar top, hammered together with copper nails, spans the length of one end of the room. High-top tables throughout the space are made out of bourbon barrels, supplemented with wooden tops.

Mr. Blum and Peter Rosback opened the Bad Martha’s Edgartown location in 2014. Falmouth was a natural extension for the local brewery because of the ferry connection between Falmouth and Martha’s Vineyard, Mr. Blum said. The new location also has a personal connection for Mr. Blum. His mother lived in North Falmouth for many years.

“For me this is all about doing something for the residents of Cape Cod and Falmouth in particular,” he said.

The brewery is both family friendly and dog friendly. An outdoor courtyard wraps in an “L” around the barn and supplements the indoor seating. The patio is filled with plants supplied by Mahoney’s Garden Center, the brewery’s neighbor. Many of the plants are available for purchase. A bocce court, sunken into the grass on one end of the courtyard, is filled with crushed oyster shells.

Most of the ingredients used by the brewery come from local farms. Some of the ingredients will eventually be harvested on site. Mahoney’s is planting 1½ acres of hops, strawberries, blueberries and other ingredients for the brewery to use. The Falmouth location will offer a food menu along with its beer selection, overseen by chef Aaron Smith. New to the brand is a thin-crust pizza made with a specialty sauce that took two years to perfect.

The taproom is a small part of the new location, with a majority of the interior of the barn taken up by a series of giant metal tanks and pumps.

Mr. Reid, the resident brewmaster, took a few minutes to walk through the brewing process, despite the hectic atmosphere Thursday, September 5. Brewing starts with grain and hot water, Mr. Reid explained. After a mill in the rear of the barn grinds the grain it travels to the front of the brewery, where it is combined with water heated to 175 degrees in a large silver tank. This creates a mash with an “oatmeal consistency,” Mr. Reid said.

The mash is then filtered through a false bottom in the tank, which results in a sugary liquid. The brewers run water on top, cycling through runoff until they reach about 15 barrels, or 500 gallons of liquid.

The grains, once removed from the brewing operation, are sent to local farms to be used as animal feed, Mr. Reid said.

They boil the liquid for about an hour, adding hops at varying times, depending on the type of brew. When time is up, they pre-filter the liquid by turning the interior of the tanks into a whirlpool. From there, a heat exchanger brings the temperature of the liquid down to about 65 degrees. “That cold water is being warmed up and actually put back into our hot water tank and that’s what we’re using for our next batch...so we’re able to recycle most of our water,” Mr. Reid said.

The liquid then gets pumped to one of the large tanks at the back of the brewery, where it ferments for a number of weeks. The temperature of the tanks drops once fermenting is through, which pulls the yeast to the bottom of the tank. That yeast is recycled for the next batch, Mr. Reid said. The beer is then carbonated and either directed to a canning system or to a tap.

The new location is close to three times the size of its Edgartown predecessor. The added space will allow Bad Martha’s to can its beer on site. In the same vein as the original brewery, a portion of the proceeds from the Falmouth brewery will go toward a local charity. The Falmouth location is still in the process of selecting that group, Mr. Flanders said.

The brewery was originally designed to function in harmony with its neighbor, Oysters Too. However, costly upgrades were needed to rehabilitate Oyster Too’s septic system. The owner chose to retire and the building was demolished earlier this year. Wildflowers have now taken its place. The 1½ acres where Oysters Too used to sit arenow a sea of green.

Mr. Flanders said he is looking forward to the first few weeks of operation to show what he and others have been working toward.

The Falmouth brewery will be open year-round, unlike its Edgartown counterpart. The hours, noon to 9 PM, will adjust based on seasonal demand.

Can't wait to come by. It looks amazing. Dog friendly!!! Thank you.

Collaboration Of Rodgers and Hammerstein Is Talk Subject