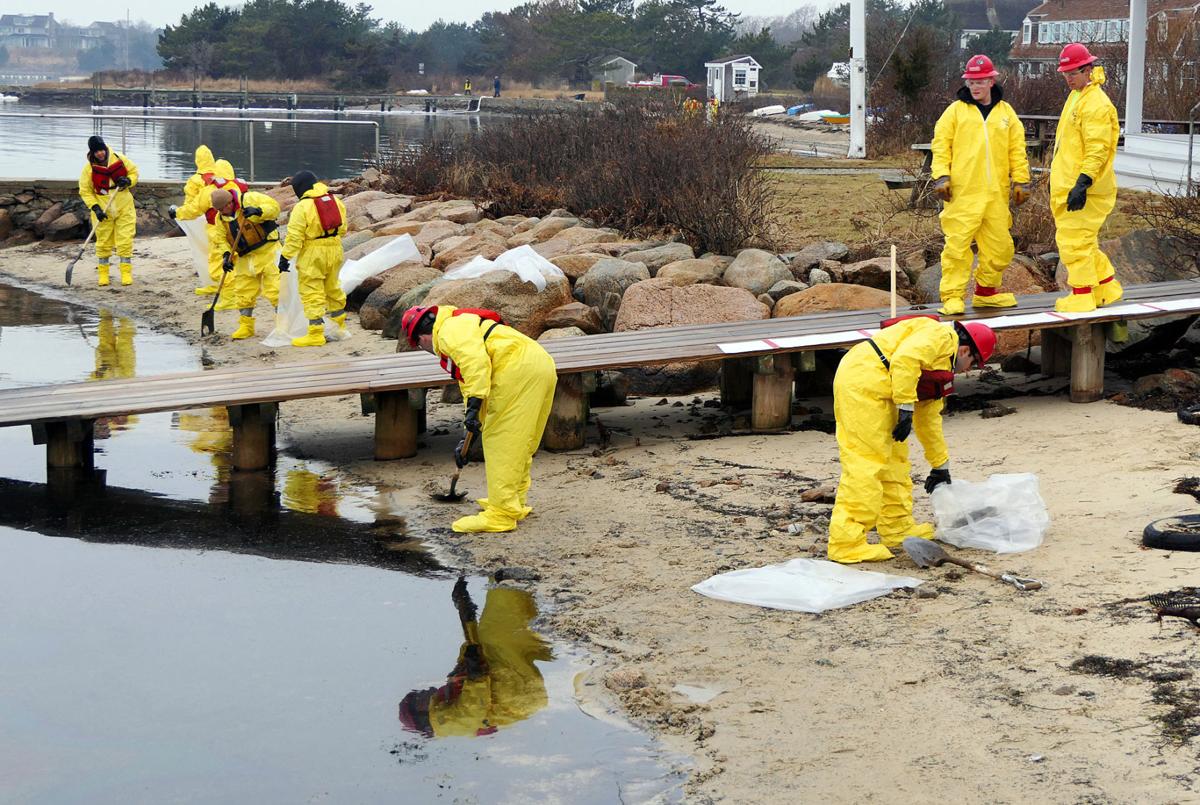 An oil spill originating Sunday night at the Woods Hole Science Aquarium closed a large portion of Great Harbor to boat travel. Crews from Clean Harbors, an environmental service, clean up affected sand and seaweed from the water line at the beach in front of the Woods Hole Yacht Club. 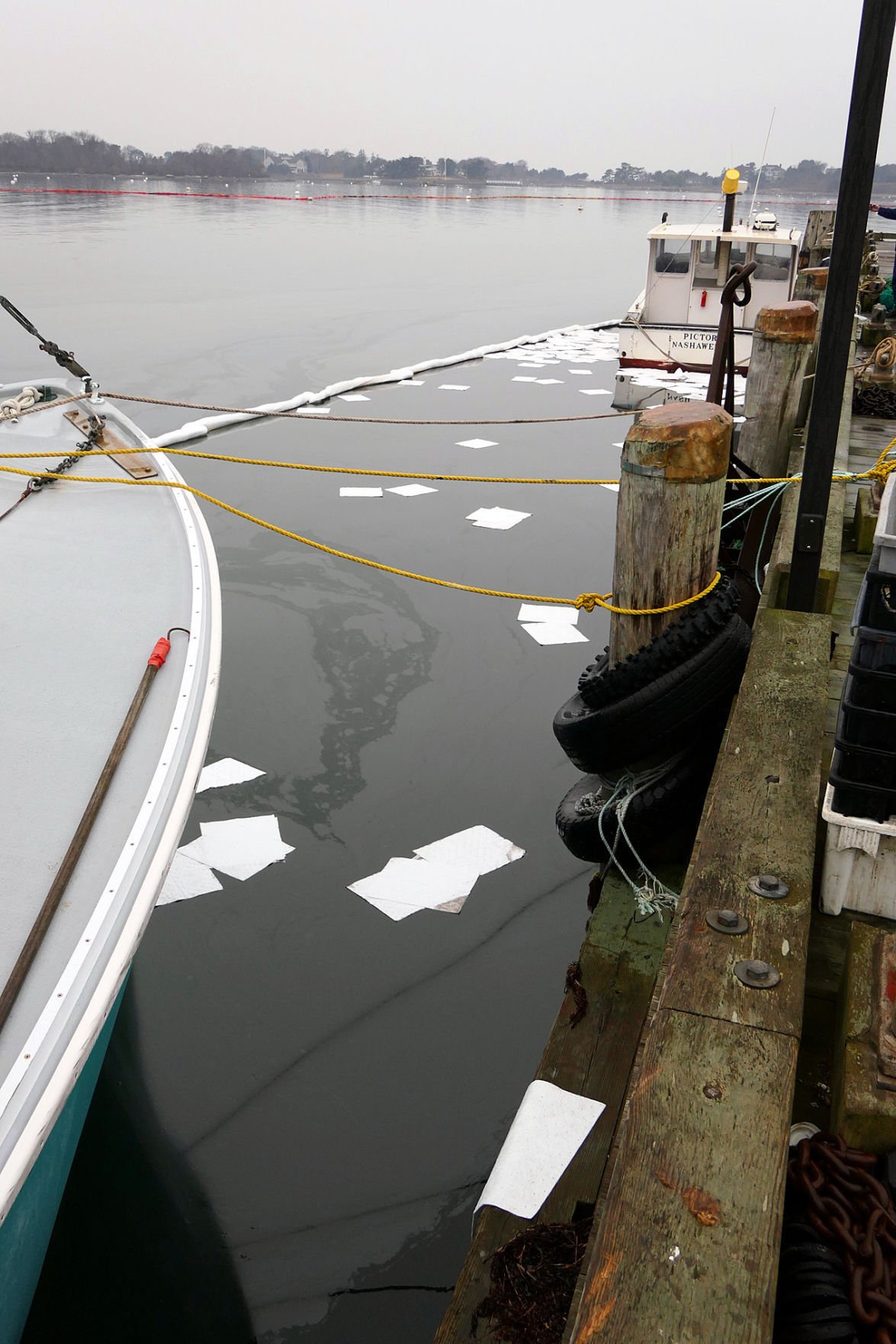 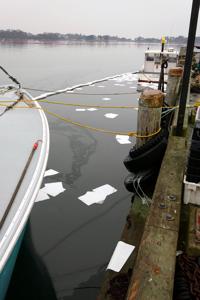 An oil spill originating Sunday night at the Woods Hole Science Aquarium closed a large portion of Great Harbor to boat travel. Sorbent pads absorb the spill from the surface. 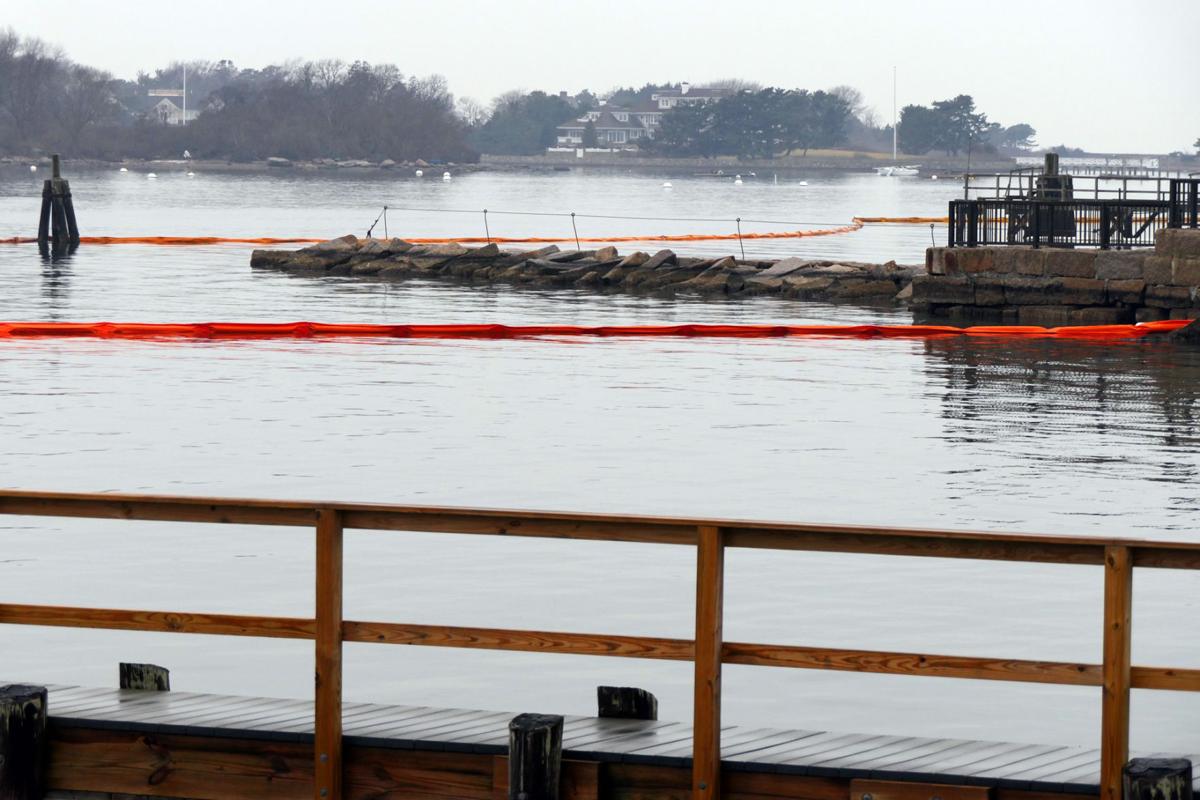 An oil spill originating Sunday night at the Woods Hole Science Aquarium closed a large portion of Great Harbor to boat travel. An orange floating barrier starting from the NOAA pier and stretching out across Great Harbor is used to limit traffic in the harbor.

An oil spill originating Sunday night at the Woods Hole Science Aquarium closed a large portion of Great Harbor to boat travel. Crews from Clean Harbors, an environmental service, clean up affected sand and seaweed from the water line at the beach in front of the Woods Hole Yacht Club.

An oil spill originating Sunday night at the Woods Hole Science Aquarium closed a large portion of Great Harbor to boat travel. Sorbent pads absorb the spill from the surface.

An oil spill originating Sunday night at the Woods Hole Science Aquarium closed a large portion of Great Harbor to boat travel. An orange floating barrier starting from the NOAA pier and stretching out across Great Harbor is used to limit traffic in the harbor.

The US Coast Guard provided an update on an oil spill in Great Harbor, Woods Hole, at a community forum on Thursday afternoon, January 25.

Coast Guard public affairs officer Ensign Nathan Mendes said they were notified of the spill at approximately 1:13 PM on Sunday, January 21. The initial sheen, located by the boat ramps near the Woods Hole Science Aquarium, was approximately 100 by 100 yards.

He described the spill as a mix of lubricating oil and diesel.

“The direction we’re moving in is to get the residual oil out of there and try to determine the responsible party,” Ensign Mendes said.

Several audience members in attendance suggested they knew the source of the oil spill. Woods Hole resident Daniel Cojanu, who reported the spill on Sunday, implicated the Ocean King, a commercial tugboat.

“I actually walked down to the boat and talked to crew and asked where the oil came from. They said ‘don’t you worry, it’s just vegetable oil from our hydraulic system’,” Mr. Cojanu said.

Coast Guard Captain Richard J. Schultz said this was one of several leads they were investigating.

They’re attempting to determine the source of the spill by comparing samples from the oil spill to samples taken from boats in the area of the spill.

“Those samples get sent to the Coast Guard marine safe laboratory in Groton, Connecticut, and as soon as we get the results back from those samples, then we’ll be able to see where that leads in the course of our investigation,” he said.

Without a match at this time, Captain Schultz was unable to name a responsible party.

“We know of the Ocean King, we know where it was, where it’s been and where it is now,” he said. “Part of our investigation, before we can conclude that they are the responsible party is to match the oil samples.”

Samples have also been investigated locally. Christopher M. Reddy, a scientist at WHOI, took a variety of different field samples by the Woods Hole dock and Woods Hole Yacht Club.

Crews applied sorbent pads and booms in the water and lined the shores with material to collect the spilled material.

“That strategy worked. The amount of recoverable product is almost gone at this point,” said Ensign Mendes.

The spill was not without its impact. Working with Sea Tow and Clean Harbors, marine and environmental services deputy director R. Charles Martinsen III searched the Falmouth shoreline to determine wildlife effected. They found 23 dead waterfowl.

“This is a high number for the amount of product in the water,” Ensign Mendes said.

The birds will be examined to determine the cause of death. Mr. Martinsen suggested some might have perished prior to the spill due to the cold snap.

The marine and environmental services department also worked with the three aquaculture farms located in Great Harbor. They needed to work quickly to get the necessary approvals to relocate the oyster farms prior to being damaged by the spill, he said.

“We were able to move two and half tons of oysters out of the area ahead of the sheen,” oyster farmer Eric A. Matzen said at the forum.

Since Sunday, Great Harbor has been closed to harvesting shellfish. Biologist John Mendes of the division of marine fisheries said they will continue to investigate the area. When they determine it is safe to harvest shellfish, they will likely continue the restriction for seven to 10 days as a buffer before reopening the area to harvest.

The cleanup will continue in Woods Hole.

“There is a unified effort here in making sure we get back to normal, if you will,” Captain Schultz said.

An oil spill occurred by the Woods Hole Science Aquarium on Sunday night, January 21, closing off a large portion of Great Harbor to boat travel.

Collaboration Of Rodgers and Hammerstein Is Talk Subject