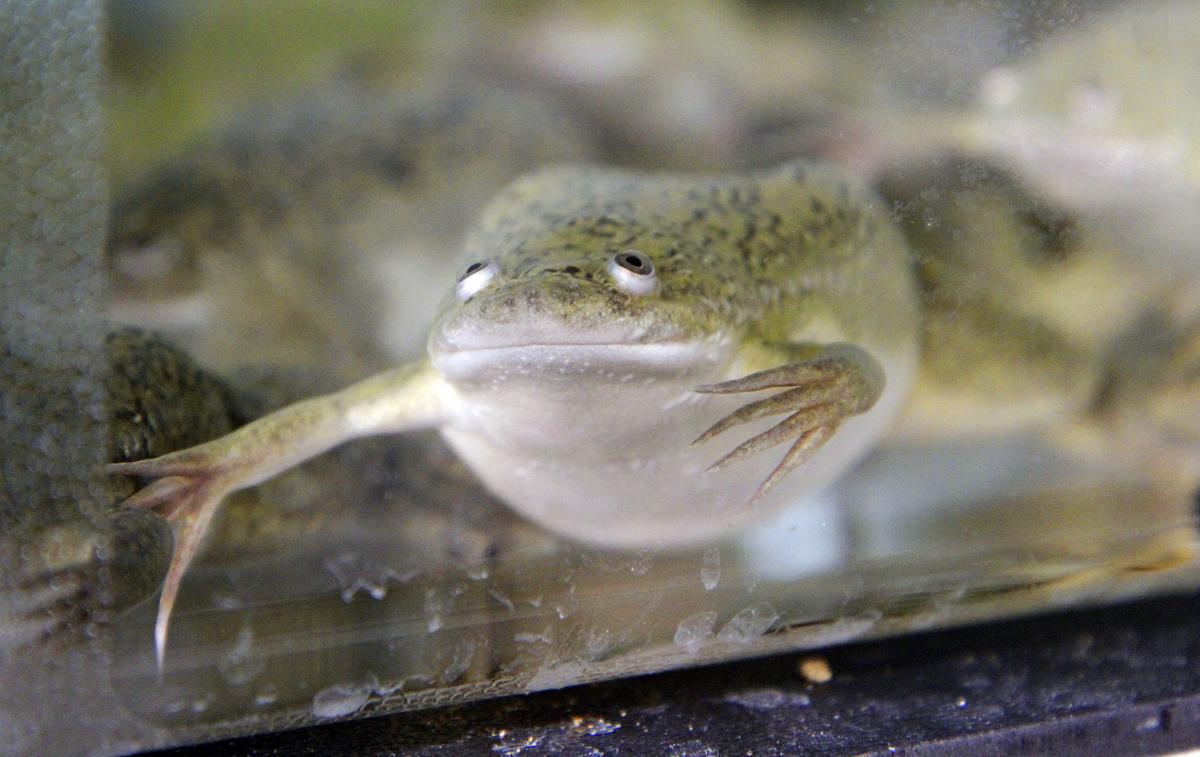 A freshwater South African clawed frog peers from a holding tank inside the Rowe Laboratories building in Woods Hole. 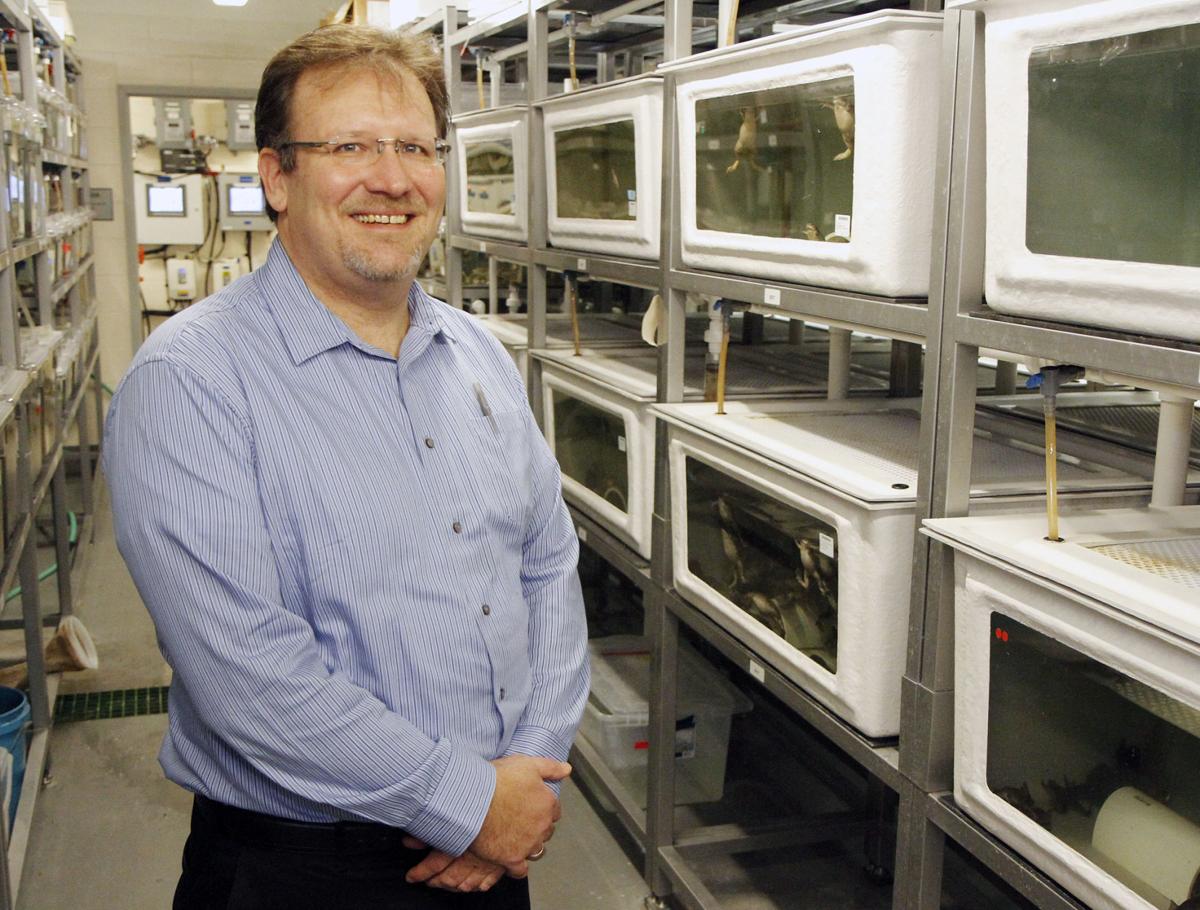 Marko Horb at his lab in Woods Hole.

A freshwater South African clawed frog peers from a holding tank inside the Rowe Laboratories building in Woods Hole.

Marko Horb at his lab in Woods Hole.

There are close to 6,000 frogs in the National Xenopus Resource Center at the Marine Biological Laboratory in Woods Hole.

The facility, funded by the National Institutes of Health, studies the freshwater African clawed frog and the western clawed frog, Xenopus laevis and Xenopus tropicalis, respectively. Shelves of plastic tanks containing the frogs line the walls. A separate room serves as a nursery for tadpoles as they develop a strong foothold toward adult life.

A number of these frogs are custom-designed.

Researchers have altered their DNA to answer specific scientific questions, such as which genes give them their green spotted coloring. Making these changes in the frog also can serve as a model for human diseases, such as kidney disease or diabetes. Scientists study these frogs to learn about the genetic causes of these diseases.

A technique called CRISPR-Cas 9 allows scientists to make a targeted mutation in the frog’s DNA, creating about 50 different strains which are sent worldwide to other scientists for research.

Cas stands for a CRISPR-associated protein. The number “9” refers to a specific protein.

The bacteria uses this genetic information and enzyme protein to home in on an invading virus and cut it apart.

Scientists saw its potential. In 2013, they learned how to harness this immune tool in bacteria to make it a genome editor in animal cells.

CRISPR-Cas 9 technology was named as the breakthrough of the year by Science magazine in December 2015 and continues to make headlines today, hailing a new era in molecular discovery.

“We have not yet seen what the impact will be,” said Mark E. Hahn, senior scientist at the Woods Hole Oceanographic Institution. “The technology is still evolving.”

Scientists in Woods Hole have caught the CRISPR wave, using it to deepen their scientific inquiry in a variety of ways.

Dr. Hahn uses the tool to understand the function of specific genes in killifish, a small fish common along the Eastern seaboard, and how they may control how the fish responds to chemical pollutants in the environment.

By designing their own guides to match up with a targeted gene, scientists can edit, remove, and replace genes using this tool. When a gene is removed, mutations result as the DNA repairs itself.

“It’s one of the cleanest ways to knock out gene function—by cutting the DNA out,” said Rae Nishi, director of education at MBL.

By disabling a gene, scientists can better understand what it does in a living cell.

“The excitement comes not from the technology, but how you use it to ask scientific questions and what kind of answers you get. That’s really the big excitement,” Dr. Nishi said.

Dr. Nishi said that MBL started teaching the technique in 2014 in a number of its advanced research training courses offered from April through October each year.

CRISPR has opened up these types of genetic studies to a wider range of animals—those whose genomes have been sequenced, including the Xenopus frog species.

Only a few species traditionally have served as animal models for molecular studies and human disease: mice, rats, a species of nematode, zebrafish and the fruit fly.

Now, with CRISPR-Cas 9, scientists are able to conduct genetic experiments on a huge variety of organisms, according to MBL scientist Joshua J. Rosenthal.

“I look at it as a universal tool,” Dr. Rosenthal said of CRISPR Cas-9.

Scientist Marko E. Horb, the director of the National Xenopus Resource Center, started using CRISPR in his own research in 2014 to study diabetes, using the frogs as a disease model. Their genome is structurally similar to humans, making it a relevant model for human disease.

Xenopus frog eggs had been used in embryology studies before this, but the frogs themselves were not used for genetic studies.

With the CRISPR tool, MBL hopes to expand the human disease animal model to marine life. MBL has a long history of studying animals from the sea since the organization began in 1888.

In the early days at MBL, scientists came to Woods Hole to study squid because they have a large axon. The electrical currents that pass through nerves are easy to observe. Scientists also studied neural circuitry—how neurons talk with one another—in sea slugs, which have a relatively simple nerve system.

“The organisms were selected because they had a key attribute, well-qualified to answer a question,” Dr. Rosenthal said.

These animals, however, were left out as genetic studies came to the forefront of research.

“Now it’s time for us to turn back to marine organisms, which is a big part of the strategic plan at MBL because we don’t understand 98 percent of the life in the ocean,” Dr. Nishi said.

Dr. Rosenthal is planning on using CRISPR-Cas 9 to study cephalopods such as octopus and squid, which have fairly sophisticated behavior compared to other marine animals.

“You don’t see smart clams,” Dr. Rosenthal said. “Squid, your basic calamari, have six times as many neurons as rats.”

Octopuses have light-sensing molecules called opsins in their skin. Knocking out the genes for the opsins could shed light on if they are truly “seeing” through their skin.

Understanding why clams can live up to 200 years and how a starfish regenerates its arms are other avenues to explore.

“Marine organisms have developed many clever ways to adapt to living in the ocean,” Dr. Nishi said.

But as science moves forward, certain ethical questions may arise with CRISPR, such as its potential use in editing human genomes.

“The most vexing question on people’s minds these days is the question whether to use this technology to edit human genomes,” Dr. Hahn said. “It is a great concern that needs to be addressed.”

'It’s one of the cleanest ways to knock out gene function—by cutting the DNA out.'