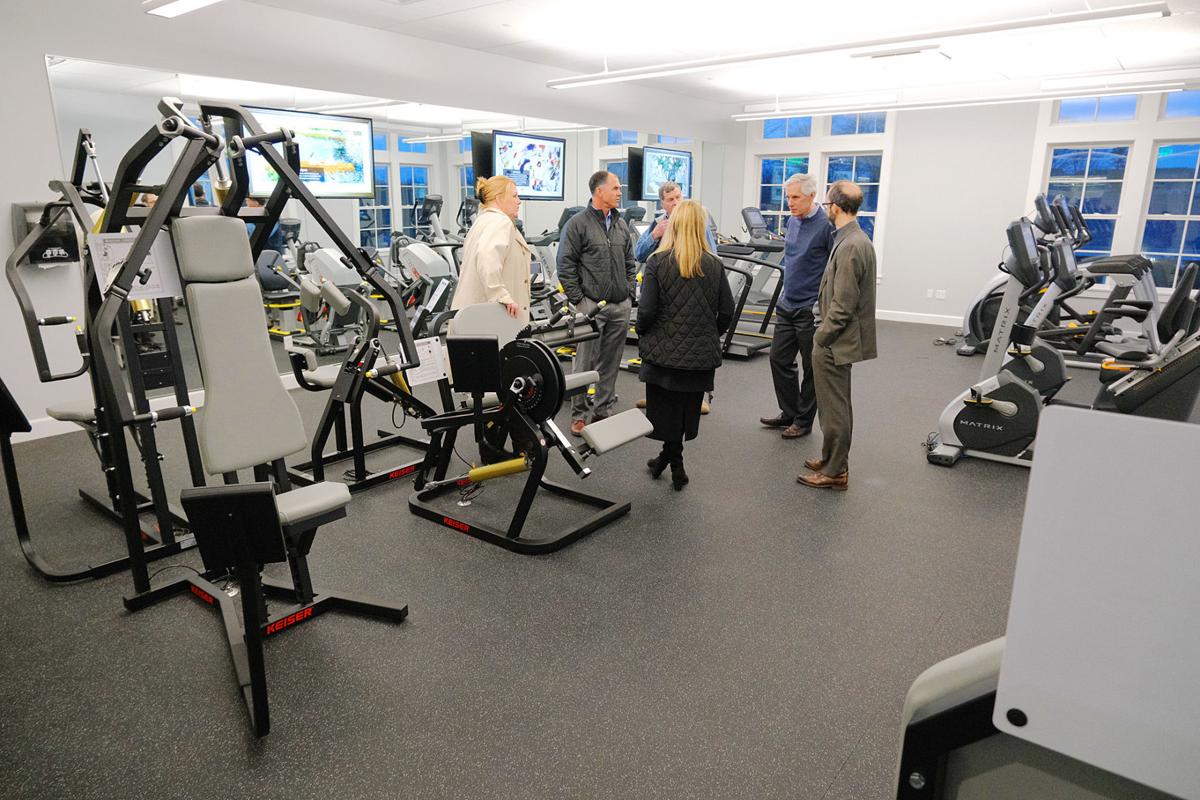 The Senior Center Building Committee gets a tour Tuesday of the gym, which is named “Heights Finish Line” in honor of a donation from Falmouth Road Race, Inc. 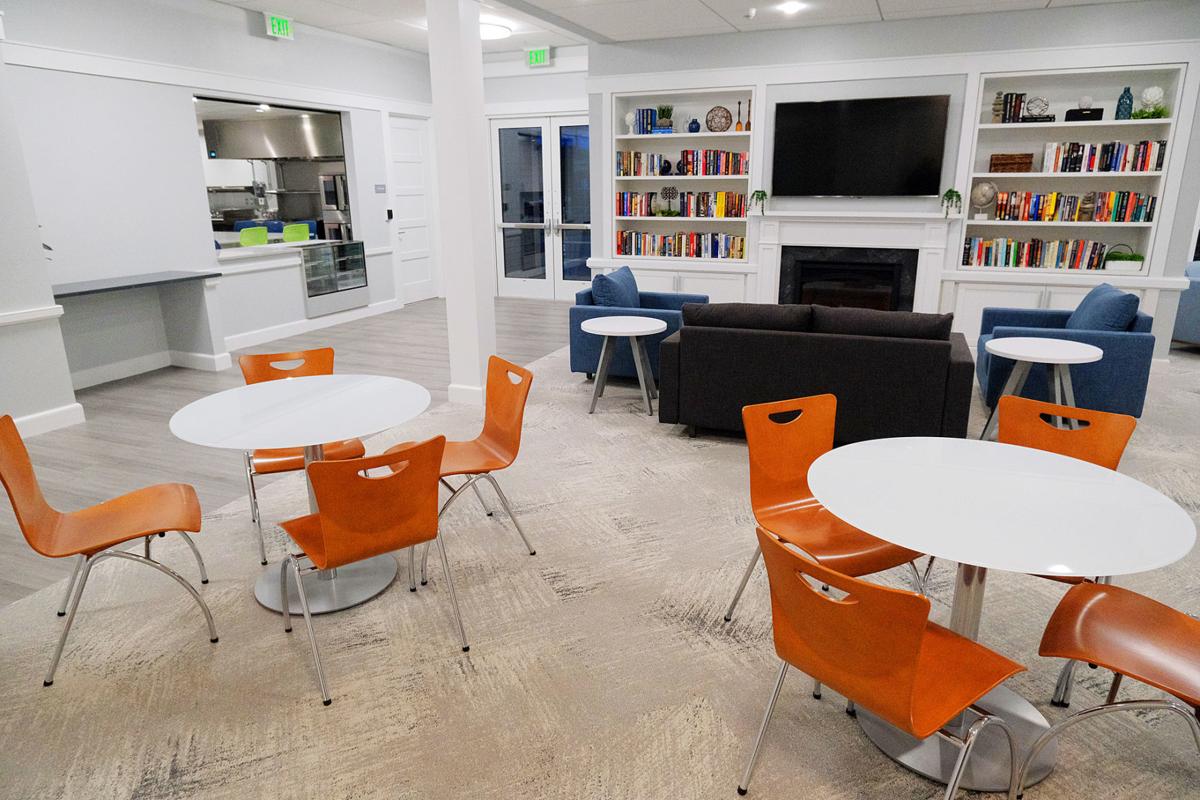 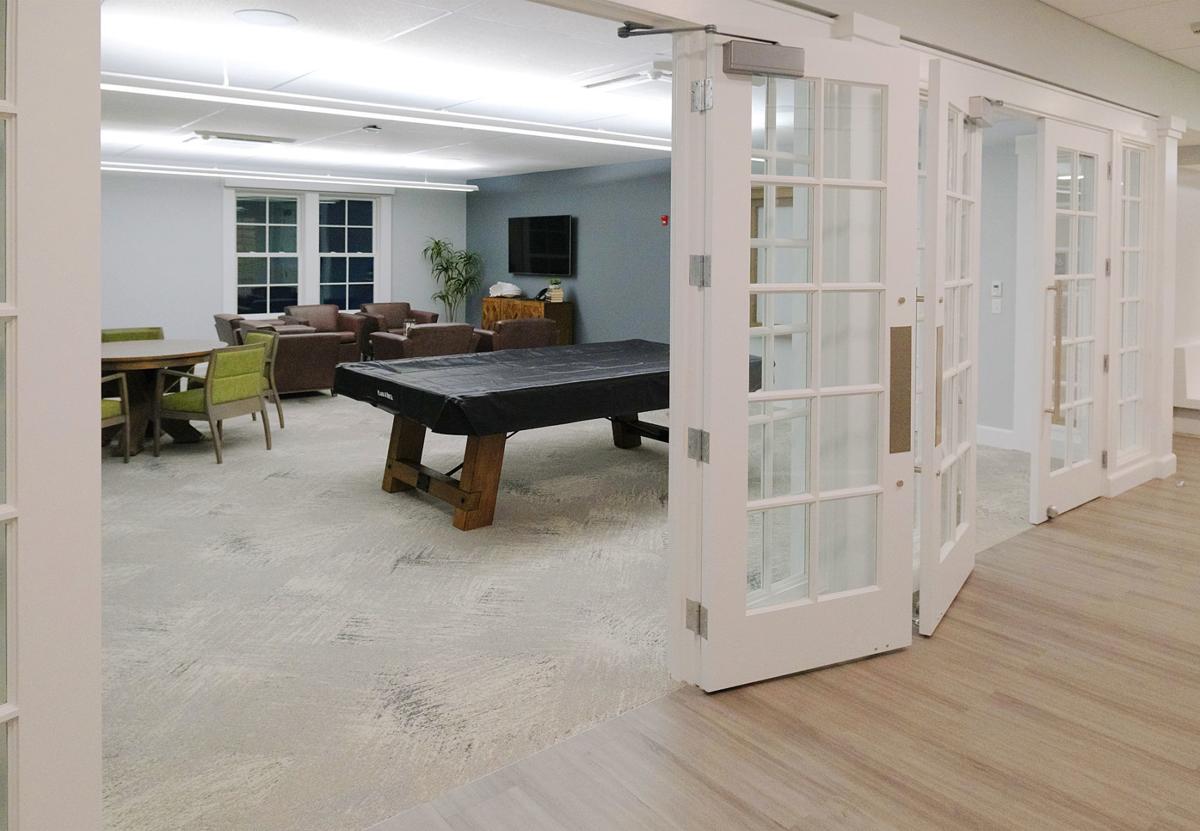 This photo shows the modern pool table that is the centerpiece of the “Bristol” Room. Some rooms are named after Falmouth beaches.

The Falmouth Senior Center project is progressing and will be ready for its opening in March.

“All in all, we are in pretty good shape,” project manager Michael A. DelVecchio said at the Tuesday, February 18, meeting of the senior center building committee. “There are a few items that are still incomplete, but the building is operable.”

One item of concern for the building committee is the wooden handrail on the front stairs going to the second floor.

“There are very few issues in this building, but that is one that has plagued us for a bit,” committee chairman James A. Vieira said.

He asked building committee members if they had taken a look at the handrail, or put their hands on it, as they toured the building prior to the meeting, held in the Old Silver Room, the multi-purpose room within the new senior center.

Committee member Christopher R. Simmler asked if the handrail could be sanded and repainted.

“I know that the painter did sand it, at least once, and it’s just a matter of if we want to press the general contractor,” Mr. Vieira said.

Owners Project Manager Daniel A. Pallotta of Project Planning Professionals said he will work with the general contractor to see what they can do to smooth out the handrail prior to the center’s March 20 opening.

“We have some time to try to get it right,” Mr. Pallotta said.

He will also work with contractor Walpole Woodworking on the exterior gate. The gate does not have a closer, meaning it remains open after use. The project called for a spring-loaded hinge.

Mr. Vieira said, “It’s not the end of the world, but if we’re supposed to have a spring-loaded hinge, it should have one.”

Mr. Pallotta said it is possible the gate has the proper hinge, but that it is not working. He will explore the matter further.

There are several other items on the list, including the two exterior doors for the building’s restrooms. The new senior center has two restrooms that are accessible from the outside.

The doors will feature a special locking mechanism, one that will allow building staff to lock and unlock the doors remotely or on a timer. Other items include the mill work on senior center director Jill Irving Bishop’s office window and a control panel for the elevator to regulate basement access.

“There is not really public space down there, so we don’t want our patrons ending up in the basement,” Mr. Vieira said.

Access to the basement via elevator will be controlled with a card swipe.

Mr. Johnson-Staub provided the building committee with an update on potential signage at the Falmouth Senior Center. This includes both signage on the building, as well as a sign for the complex as a whole.

“We’re looking at a sign to identify all the municipal functions that are there, at least all the buildings that share that space,” Mr. Johnson-Staub said.

While the design of the sign has not been finalized, he said it will be approximately 20 square feet and located across from the Marks building.

“The purpose of that sign is very much functional, with big letters to identify the buildings that are here,” Mr. Johnson Staub said.

“There would be a lot of information, programs and activities we could use that sign for, in addition to general PSAs, like Town Meeting and elections,” Mr. Johnson-Staub said.

He asked the committee for input regarding an electric sign.

“I like it,” committee member Patrick L. Callahan said. “We could get more information out, at the end of the day.”

He asked if installing an electronic sign near the Falmouth Senior Center would set a precedent and allow nearby businesses to do the same.

“It doesn’t legally, but they could go before the board of selectmen for a variance and make that argument,” Mr. Johnson-Staub said.

“Frankly, I’m not sure we want our drivers on 28 to be distracted,” he said. “It’s pretty horrific out there in July and August already.”

Committee member Peggy S. Nickerson said she reads the sign, which is a letterboard that can be changed manually.

“I think it would be very beneficial,” Ms. Nickerson said.

“If we move forward with it, a lot of attention will be paid to the design, with opportunity for comment,” he said.

There will also be lettering on the building, identifying the building as the Falmouth Senior Center. This sign will be externally illuminated.

A celebration of the opening of the new Falmouth Senior Center will be held on Friday, March 20, from 3 to 5 PM.

“I think the public is going to love this place,” Mr. Pallotta said.

Although the building will open on March 20, some outstanding work will remain, including the landscaping.

“There is not a tremendous amount to be done out there, and some needs to be redone,” Mr. Vieira said. “It will be done when it is time-appropriate.”

In addition, the owner’s project manager and architect will conduct a walk-through of the building 10 months after opening. This will enable them to find any outstanding issues during the warranty period.

“And there will be things,” Mr. Pallotta said. “There are two million parts in this building, and there are going to be 100 that aren’t perfect.”