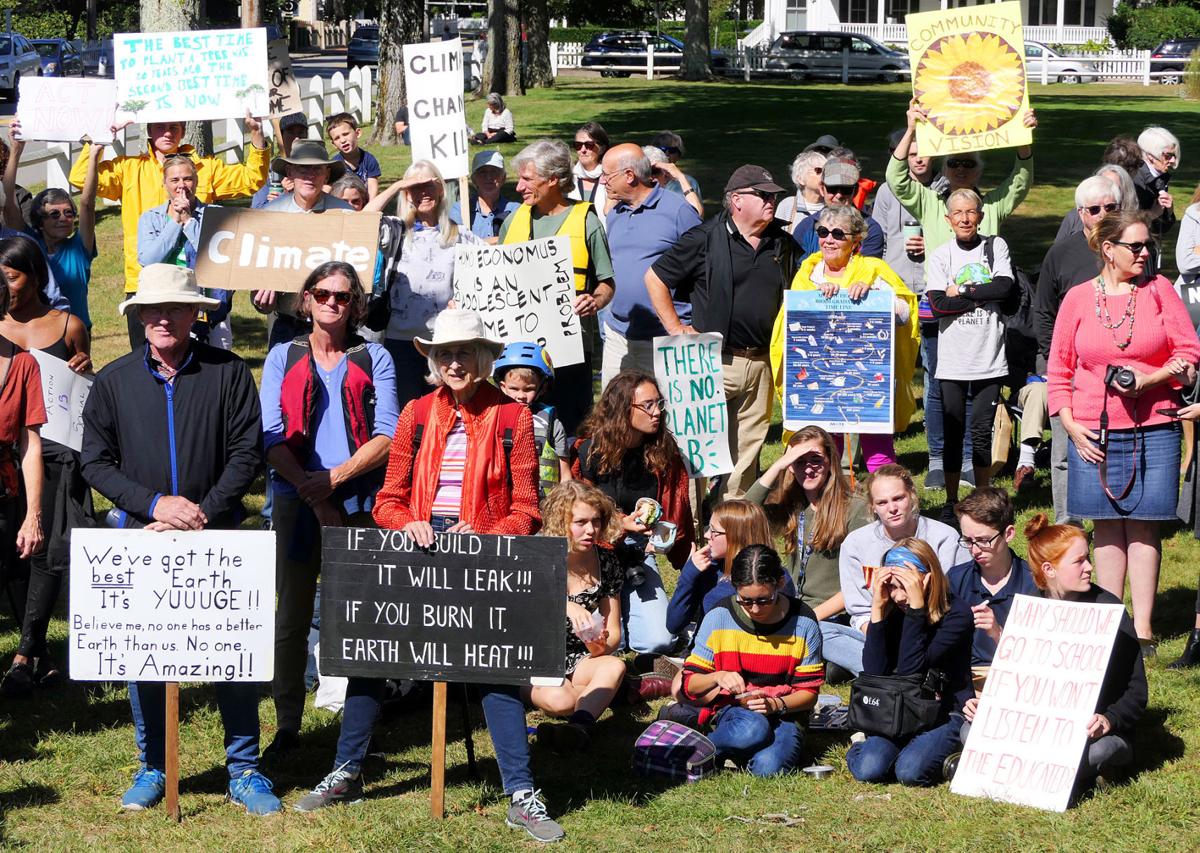 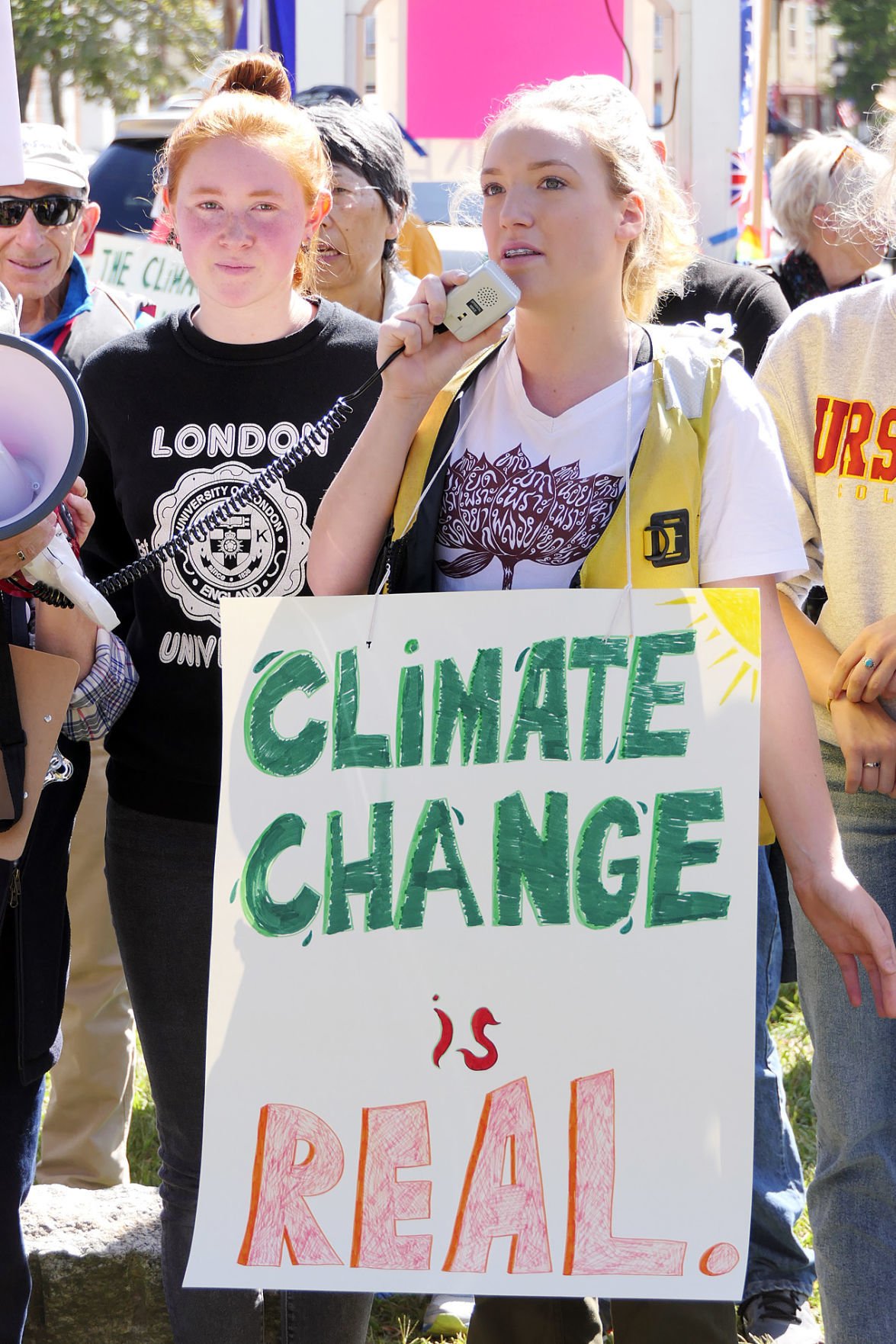 Ella Warner, a freshman at Falmouth Academy, speaks as FA fellow freshman Sadie Leveque looks on. A group of Falmouth Academy students chose to skip school to be at the event in spite of any risk of consequences. 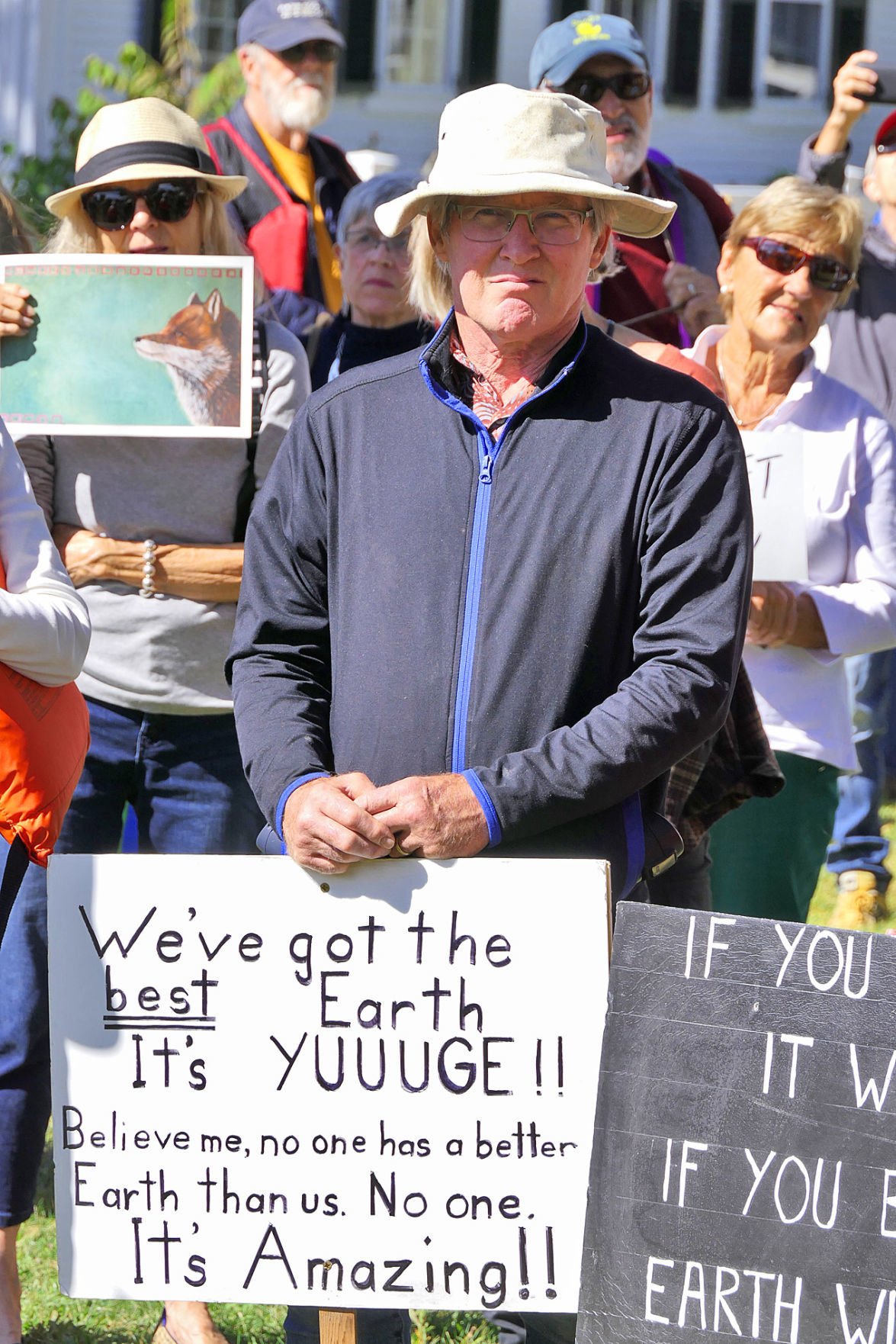 About 160 people gathered on the Falmouth Village Green Friday for a "climate strike." Earle Barnhart of East Falmouth puts a spin on Presidents Trump's style of speech. 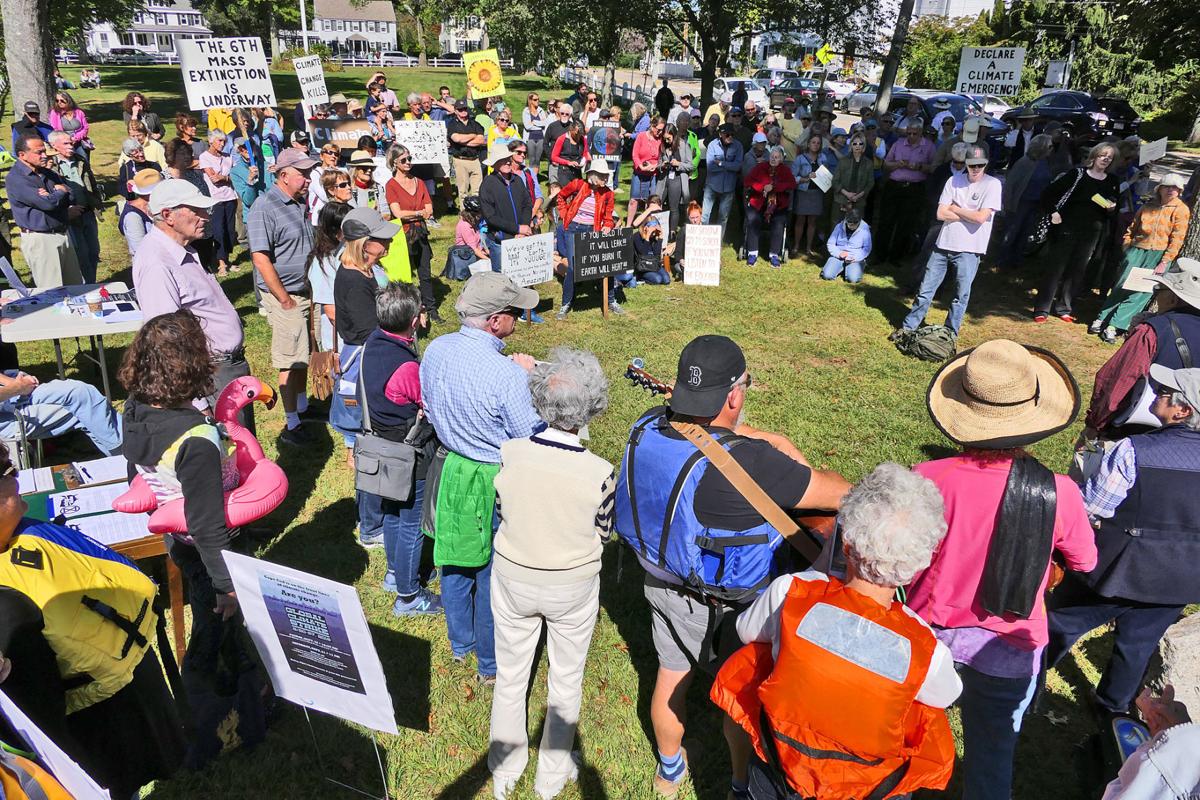 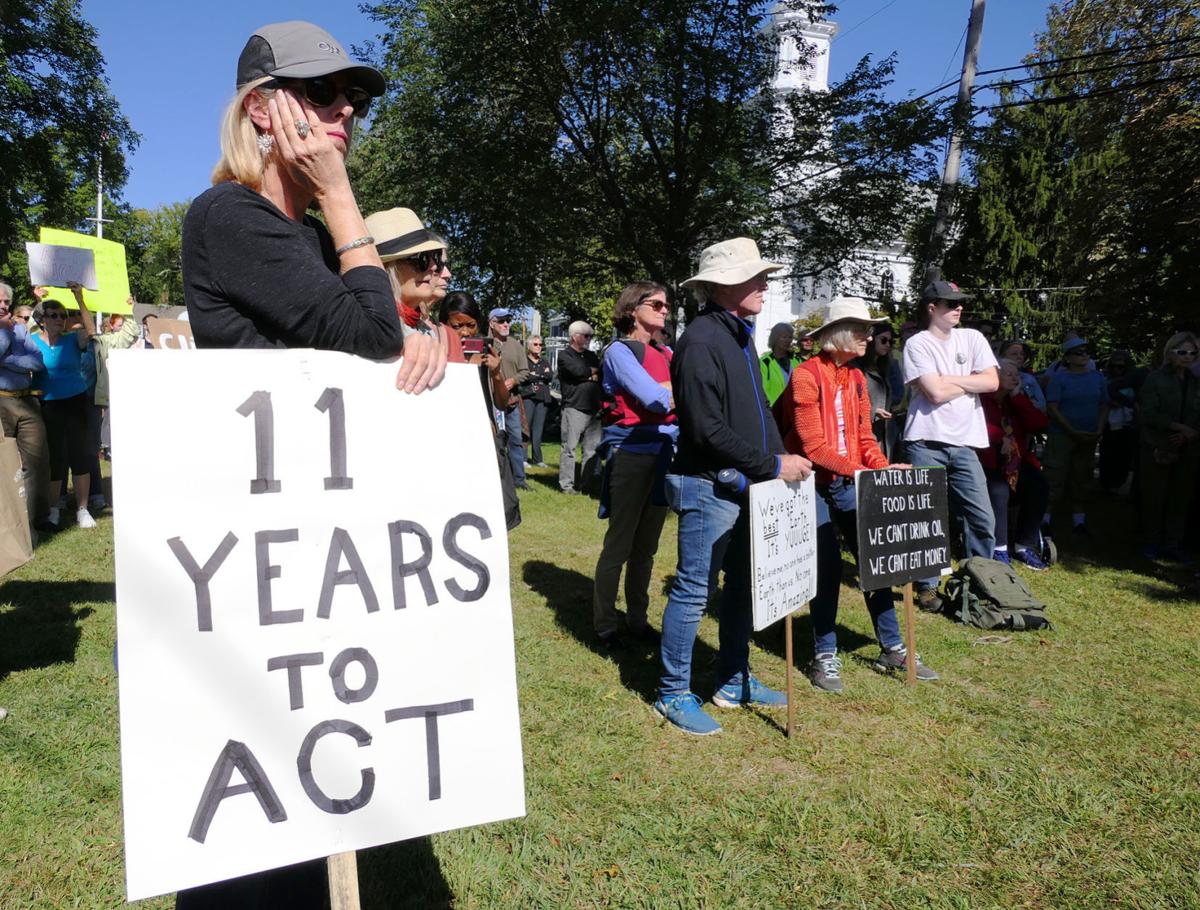 About 160 people gathered on the Falmouth Village Green Friday for a "climate strike." Maureen Costa of Waquoit holds a sign.

Ella Warner, a freshman at Falmouth Academy, speaks as FA fellow freshman Sadie Leveque looks on. A group of Falmouth Academy students chose to skip school to be at the event in spite of any risk of consequences.

About 160 people gathered on the Falmouth Village Green Friday for a "climate strike." Earle Barnhart of East Falmouth puts a spin on Presidents Trump's style of speech.

About 160 people gathered on the Falmouth Village Green Friday for a "climate strike." Maureen Costa of Waquoit holds a sign.

More than 100 people gathered on the Falmouth Village Green to urge action against climate change, on Friday, September 20.

The demonstration was part of an international strike organized by Swedish climate activist Greta Thunberg. Ms. Thunberg led the New York City climate strike on Friday. Students walked out of schools in cities around the world.

In Falmouth, a small group of students from Falmouth Academy and Falmouth High School attended the strike, which was organized by members of Engage Falmouth, 350 Cape Cod, the Coalition for Social Justice, Move to Remove, and the Upper Cape Cod Women’s Coalition.

Lori S. Duerr, Falmouth Public School Superintendent notified families earlier this week that Friday, September 20 would be declared Take Care of the Earth! Day. “As you can imagine, it is not safe to allow students to ‘strike’ or walk out of school. However, we do want to be responsive to the importance of advocacy around climate change,” Dr. Deurr wrote.

“Each of our schools will be engaged in activities specifically focused on ways we can positively impact our earth,” she added. Students and staff were asked to wear green and participated in discussions about ways to help the Earth such as recycling, composting, and cleaning up beaches, according to the letter.

At the strike, Falmouth Academy student Sadie Leveque brought along her mother, grandmother, and younger sister, ensuring that three generations of her family were present to advocate for action. She said that climate change is not a “future issue.”

“People are thinking, ‘Oh, it’s in the future. We have time.’ But we don’t have that much time. So it’s scary,” Ms. Leveque said.

Ms. Leveque’s mother, Lauren Leveque, said she was proud that her children were motivated to attend. “I want the kids to feel empowered to use what they have. They can’t vote right now, but they can influence us. They can help encourage the adults, who have the power right now, to make better decisions.”

Ms. Leveque's grandmother, Ruthanne Molyneaux said her granddaughters were the reason she decided to attend the strike.

Sally Hawck, another attendee, said she was striking because of her children and grandchildren. “We have to act now… I want to do as much as I can,” she said.

Speakers at the strike included Massachusetts State House Representative Dylan Fernandes. Mr. Fernandes spoke about the ways that residents can make a difference on an individual level, such as increasing energy efficiency in their homes. Penny Duby, co-founder of several women’s organizations on Cape Cod, including Upper Cape Women’s Coalition and Falmouth Supporting Women in Financial Transition (SWIFT), addressed the impact of climate change on women.

Susan M. Natali, an associate scientist at the Woods Hole Research Center, shared her experience working in the Arctic tundra this year.

"This past July was the warmest month that was ever recorded in the Earth’s history. I was in the arctic tundra in July and it was 90 degrees fahrenheit. It’s not supposed to be 90 degrees in the tundra. It was really, really hot. At the same time it was also hard to breathe because we were surrounded by smoke... there were extensive wildfires that were happening across Alaska,” Dr. Natali said.

Dr. Natali echoed Rep. Fernandes’ statements. “Every one of us can take an action that will impact the globe, as Dylan said, by using renewable energies, by thinking about… our travel and how we are heating our homes…,” she said.

“And how we vote,” a member of the crowd shouted.

“And how we vote,” Dr. Natalie repeated.

Everyone who took the microphone to speak reiterated a sense of urgency. George M. Woodwell, an ecologist and founder of Woods Hole Research Center, noted, “while you’ve heard a splendid array of comments about the crisis that we are in, there’s one point that I would make and that is: the crisis is now. It’s not five years from now, three years from now, ten years from now.”

One attendee, Susan Kaiser, noted that the crisis was a long time coming. “We could have had this event in the 80’s, in the 70’s and it would have been just as pertinent and we wouldn’t have had to have seen as much destruction as we’re seeing,” she said.

Mary O’Brien Tyrrell stood at the edge of the grass on the Village Green, holding a sign for cars passing by. “I’m 76 and I’m a Vietnam veteran. I’m very proud of my country, but not about what our ability is to ignore this problem,” she said.

The entire strike lasted about an hour and a half. As numbers waned around 12PM, Sandra Faiman-Silva, one of the organizers who had introduced all of the speakers, continued passing out leaflets with instructions for how to contact legislators to urge action.

“We wanted to do something. It’s such an important issue and it’s really a crisis,” Ms. Faiman-Silva said.

Friday’s strike on the Village Green coincided with strikes in Sandwich, Truro, Barnstable and Dennis.

The climate strike continues in Falmouth on Saturday, September 21 with demonstrations at Clinton Road, Oyster Pond, Falmouth Mall, and the Village Green from 11AM to 12PM.