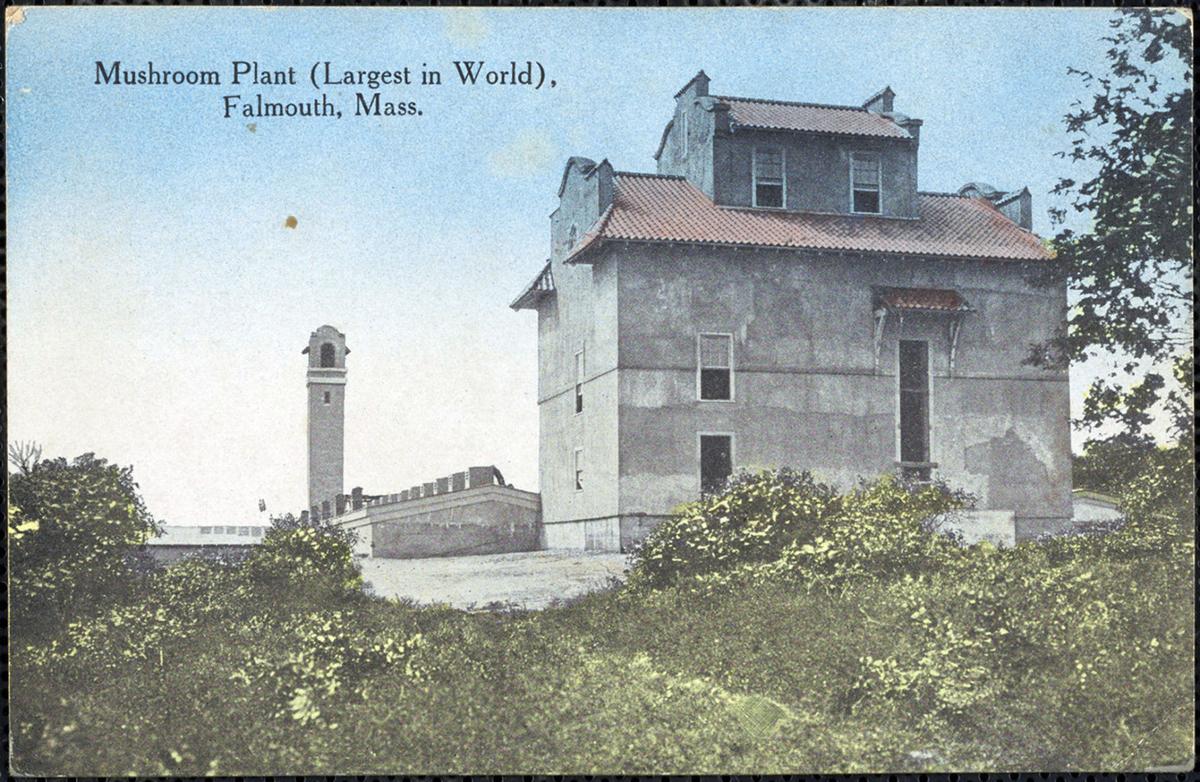 This postcard from the Falmouth Public Library’s collection depicts the mushroom plant. The exact date is unknown. 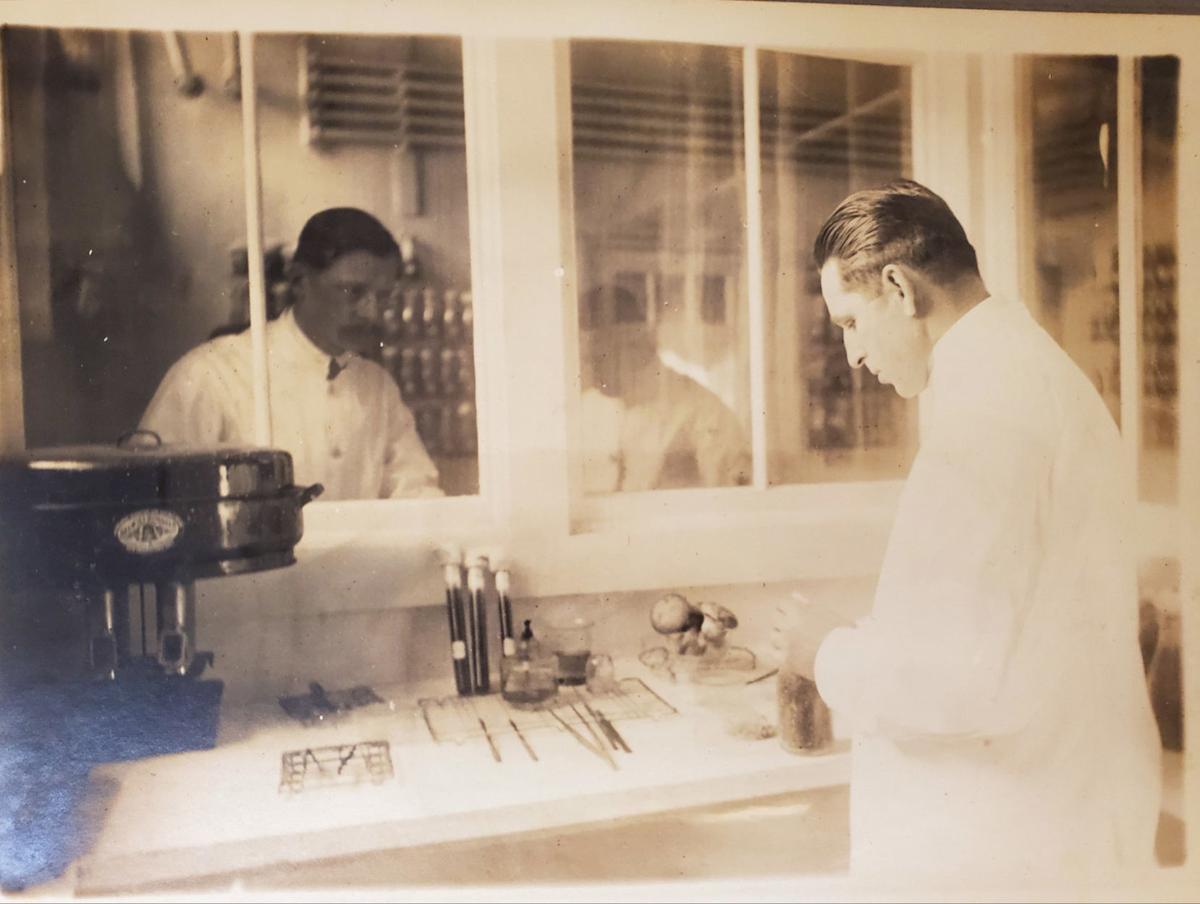 A photo from about 1912 depicts employees of the mushroom plant experimenting with spawning. The photos are from the Falmouth Historical Society’s archives. 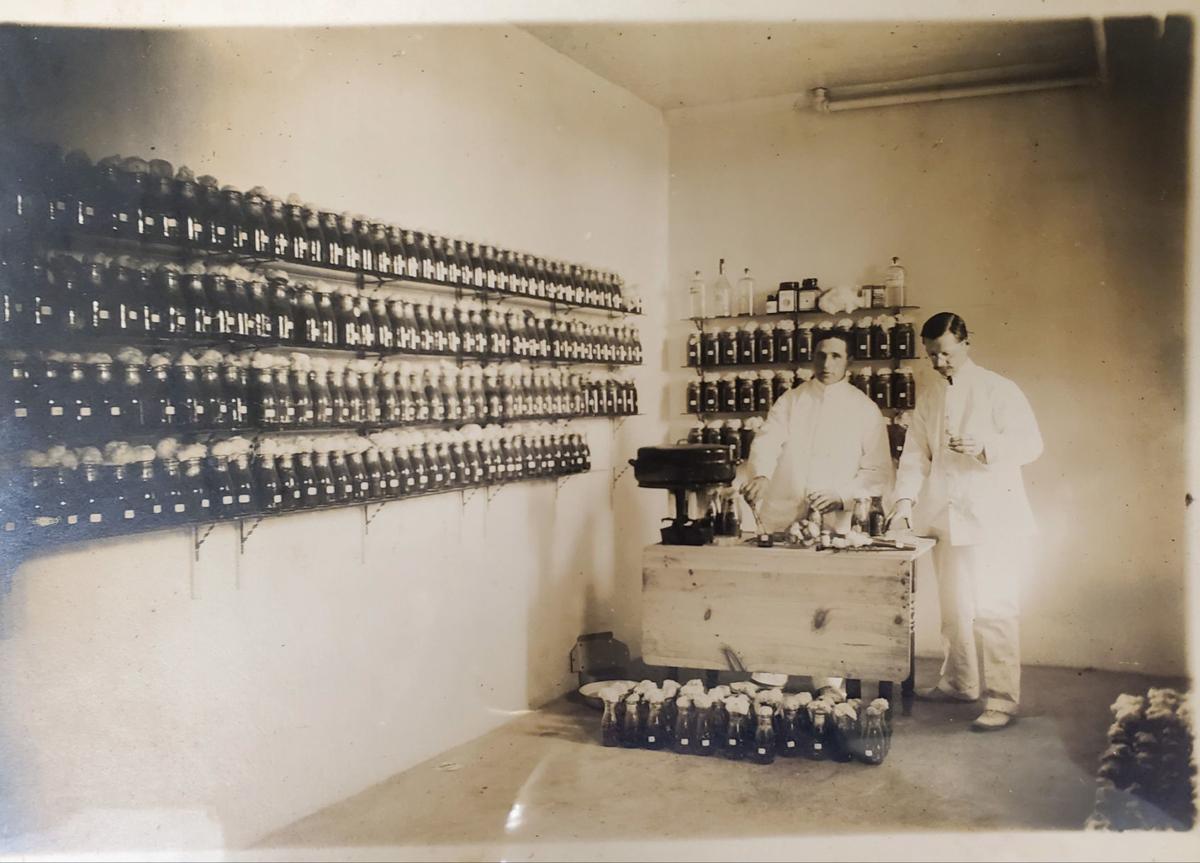 A photo from about 1912 depicts employees of the mushroom plant experimenting with spawning. The photos are from the Falmouth Historical Society’s archives.

This side view of the mushroom plant depicts the length of the factory. 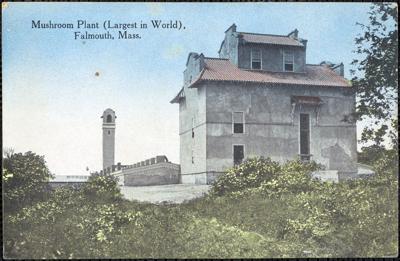 On Gifford Street and abutting Jones Road there once sat a successful mushroom plant that has been largely forgotten.

“It’s one of the more interesting things in Falmouth that people don’t know about,” said Meg Costello, research manager at Museums on the Green. “It’s a great mystery.”

Where the current Coonamessett Inn sits was a colossal, southern California-style complex made up of a tower, greenhouses and an office building.

In the small, rural area, the mushroom plant loomed over the rest of the town, Ms. Costello said.

R.M. Morse, a wealthy and prominent resident, was the main investor in the operation, Ms. Costello said, and the mushroom plant was the idea of L.C. Whiting, Mr. Morse’s son-in-law.

Other wealthy summer residents in Falmouth were stockholders of the company, according to an Enterprise article from 1911.

The article said the plan for the 18-acre property was to build eight houses, each 150 feet long and 11 feet underground with 6,000 square feet of floor space. Four of the houses would be refrigerated for use in the summer, and four would be heated for winter mushrooms.

Ice from Jones Pond was harvested and wagoned to use in the ice house, Harry C. Richardson wrote in “The Book of Falmouth.”

Only four cellars were completed, as well as a tower, ice house and power, heating and canning plants, according to “The Book of Falmouth.”

At the time profits from the mushroom industry were said to be very large, and all growers had seen “handsome” returns. The retail price of mushrooms back then was between 75 cents and $2 per pound. That would be between $20 and $54.50 today.

The mushrooms made out of the plant on Gifford Street were sold all over the country but particularly in New England. Mushroom houses in Pennsylvania previously supplied the Boston market before the Falmouth plant was created. The mushrooms were sold to Boston and New York markets and consumers, according to a 1911 article.

The plant also canned its mushrooms. It was difficult to successfully can mushrooms and retain all of their natural flavor, but the Falmouth Mushroom Cellars used a new process that canned them while also keeping their flavor.

In a laboratory of the cellars, scientists experimented with growing mushrooms.

From 1911 to 1914 Gustaf Husberg was the foreman, according to an article from July 1938. He had grown up hunting mushrooms with his father and was a garden landscaper for the Beebe family at Highfield.

“Mushrooms are very hard to raise,” he said in the article. “We had to take the spawn from field mushrooms and propagate it in the laboratory. Mushrooms grow in a curious way. We used to take the spawn, treat it until it developed into mycelium, which looks like thin white threads. I was really proud of the way we grew mushrooms from the mycelium.”

The mycelium was placed between bricks of mixed soil and horse manure, which was brought in by the railroad station. The mycelium grew into the bricks and became a part of them, he said. The plant mailed mushroom bricks all over the country.

“Then the job was easy, for in the dark cellars, the mushrooms grew quickly,” Mr. Husberg said.

About 250 pounds of mushrooms were shipped daily to Boston markets, according to the 1938 Falmouth Enterprise article.

Mr. Husberg worked to discover the correct temperature and moisture conditions for developing the spawn. At one point his laboratory in the plant got too small, and Mr. Husberg took his experiments home to his kitchen.

At one point the employees organized a baseball team called the Mushroom team and played the high school’s baseball team.

But after only a few years, the mushroom plant was closed. By fall 1916 the mushroom business ended. Some say a blight infected the cellars, while others say transportation problems caused the plant’s demise, according to “The Book of Falmouth.”

With the United States’ involvement in World War I, the conservation of food was on everybody’s mind, according to “The Book of Falmouth.”

Roger I. Sherman took over the property and installed a refrigeration system. By September 1917 Mr. Sherman’s canning factory started preserving foods, such as tomatoes, string beans and corn. The factory employed many locals, specifically women who took over factories as the men fought in the war. About 160 people were employed there, according to a 1920 Enterprise article.

Thousands of cans were produced every day and shipped throughout the country.

When the war was over, the need for preserving food was less important, according to “The Book of Falmouth.”

In 1924 the property was sold to Mr. John A. Davis of Falmouth Heights. The building still had its greenhouses, mushroom cellars and a large ice house. He built two bungalows on the property.

Several years later Mr. and Mrs. Alexander Morin of Jones Road bought the property for $1,500. After only a couple of weeks they sold the property to Alvin H. Emery of West Falmouth for development.

By July 1941 the only remaining piece of the plant was its chimney. Soldiers of the 101st Engineers at Camp Edwards toppled the chimney using a charge of TNT. The chimney provided no value to the town and was seen as a danger, according to a Falmouth Enterprise article from 1941.

In 1952 neighbors opposed the permit for a new plant on Gifford Street where the mushroom plant once sat. F.V. Lawrence had bought the property and intended to create a contracting yard for the “purpose of casting concrete building units.”

Mr. Lawrence built Homeport Village, a colonial shopping center, in 1963. In 1969 Cornelius J. Hickey purchased the property and constructed colonial professional office buildings, according to “The Book of Falmouth.”

With new buildings on the site and its chimney toppled long ago, the only remnants of the mushroom plant are old newspaper articles and documents, although some jokingly say that if the wind blows right, a smell of mushrooms wafts through the air.