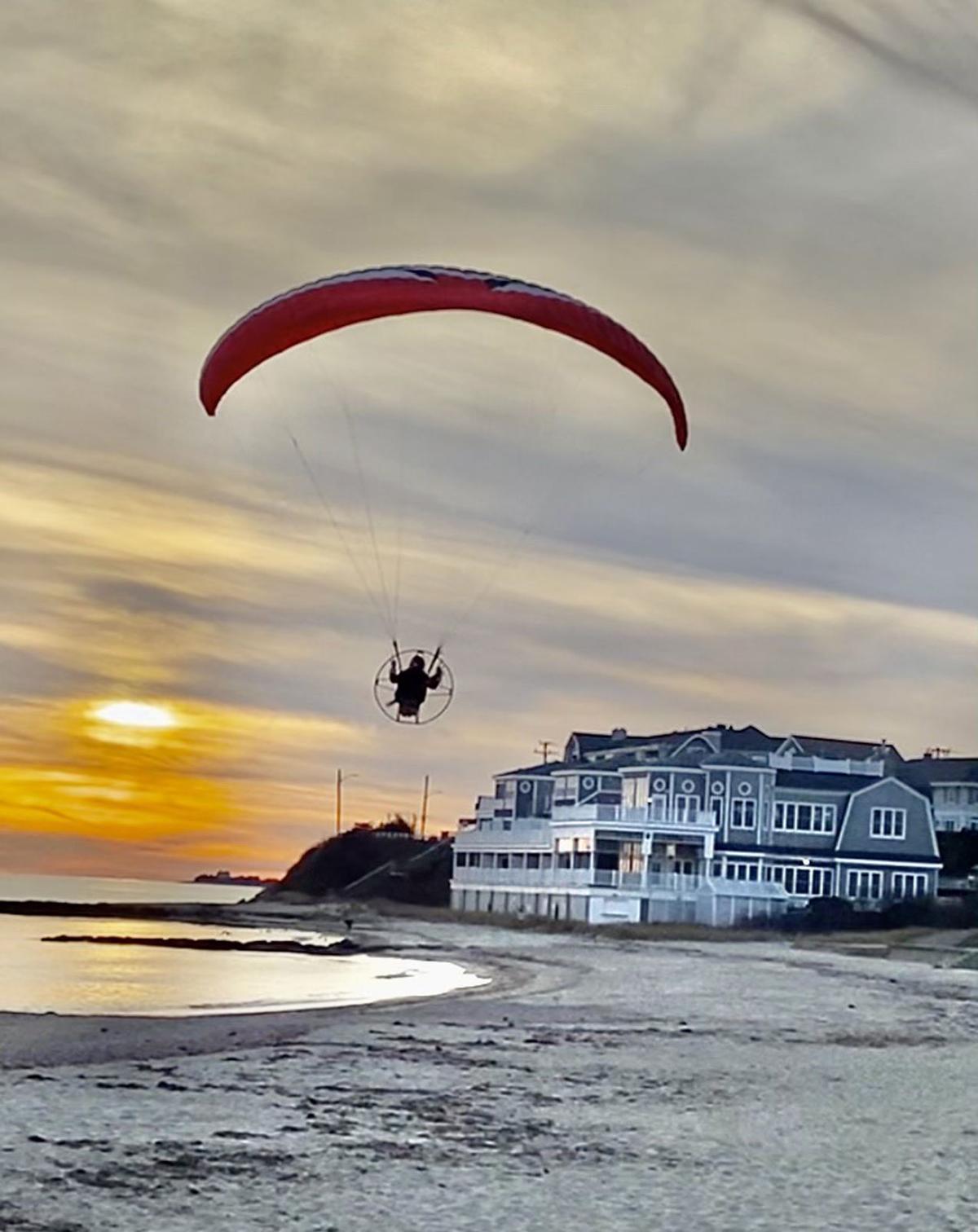 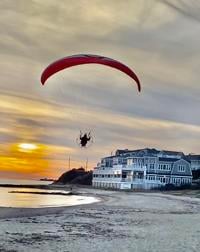 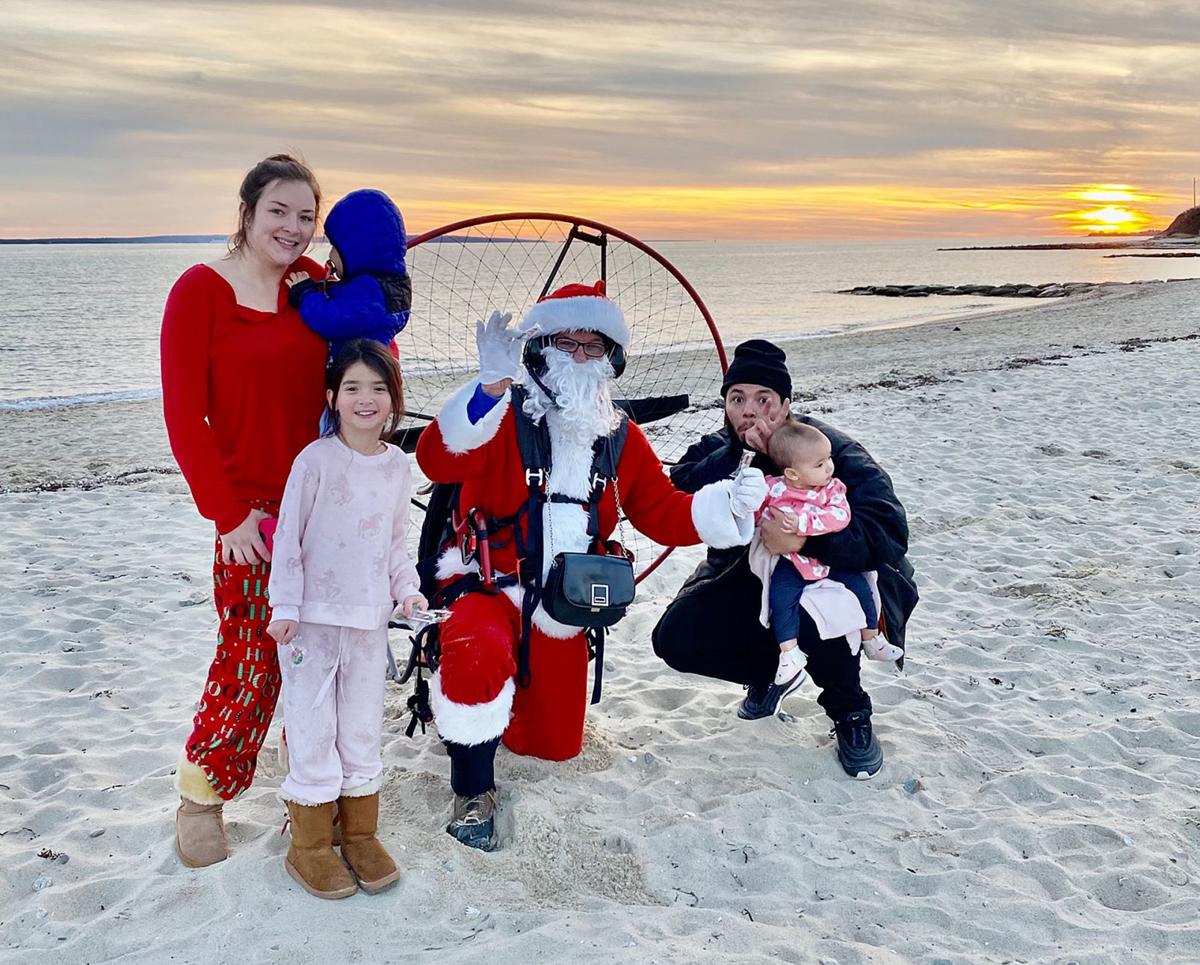 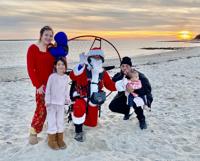 Santa flew onto Falmouth Heights Beach last week. Above, (from left) Lauren Nee holds her 1-year-old daughter Caydian Nee; in front of her is her daughter, Aubriella Benton, 8. At right, her partner, Edwin Rivera, holds his 10-month-old daughter Alessia Rivera. At left, Santa comes in for a landing.

Santa flew onto Falmouth Heights Beach last week. Above, (from left) Lauren Nee holds her 1-year-old daughter Caydian Nee; in front of her is her daughter, Aubriella Benton, 8. At right, her partner, Edwin Rivera, holds his 10-month-old daughter Alessia Rivera. At left, Santa comes in for a landing.

Falmouth resident Edwin D. Rivera was driving by Falmouth Heights Beach on December 23 when he saw a man in a Santa costume strapping on powered paragliding gear.

He stopped to ask if he had time to go get his children. When the answer was yes, he rushed to his home nearby and said to his family, “I found Santa!”

The five of them made it back to the beach, one of them still in pajamas, in time to see Santa fly, dropping candy canes to those down below as he did.

“My kids loved the candy dropping from the sky,” Mr. Rivera’s partner, Lauren H. Nee, said. “They didn’t want to leave; they stood there the whole time in the freezing cold,” she said of Santa’s visit.

For the last few years, Ronald R. Petrie, owner of the local real estate management company Cape Cod Property Solutions and a powered paragliding (PPG) pilot, has dressed as Santa Claus and taken to the skies over Falmouth Heights Beach, circling and dropping candy before landing to have photos taken with his delighted audience, made up of whomever happens to be on the beach at the time.

“The parking lot was full this year,” Mr. Petrie said, “so a lot of people saw me. Even the adults love what I do. Especially with what is going on in the world this year, it’s good to keep the Christmas spirit alive.”

Mr. Petrie, who lives in Falmouth Village, moved to town about three years ago from Rhode Island, where, for many years, he was Santa for underprivileged children.

He has been “flying” for about seven years, taking to the sky in a large parachute wing with a gas-powered propeller strapped to his back.

While the FAA regulates a maximum ceiling of 17,999 feet for a paramotor operator, Mr. Petrie said that most pilots he knows stay to just a few thousand feet.

“At 10,000 feet I’m freezing and I need supplemental oxygen, and that’s just not much fun. We like to stay pretty low and slow,” he said.

Although he can stay up in the air for three or four hours and cover 100 miles, on his Christmas flights Mr. Petrie concentrates on sailing over the beach, tossing candy from the sky from the pouch he wears around his neck for easy access, and then landing, so people can take photos.

“I love this sport, so why not have a little fun with it?” Mr. Petrie said “It’s pretty cool for me, giving back in the spirit of Christmas.”

Next year, Mr. Petrie plans to advertise his Christmas flight—which is always wind- and weather-dependent but intended for Christmas Eve—through social media in advance.

He also might take off from a different beach, to prevent children waiting at Falmouth Heights Beach from seeing Santa donning his costume and flying gear before the flight.

“He brought the sparkle of Christmas back,” Ms. Nee said of Mr. Petrie’s Santa flight. “He achieved it. We are going to make it a tradition to go back every year.”