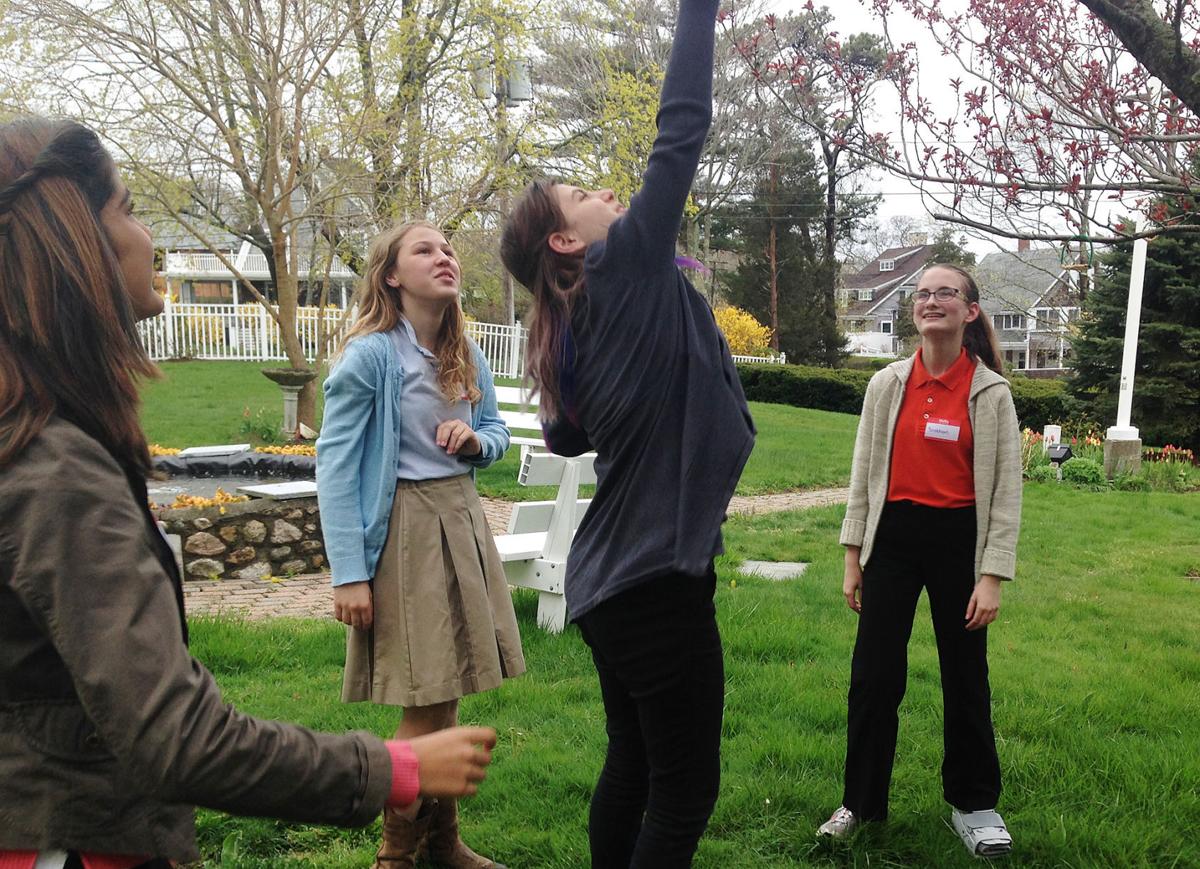 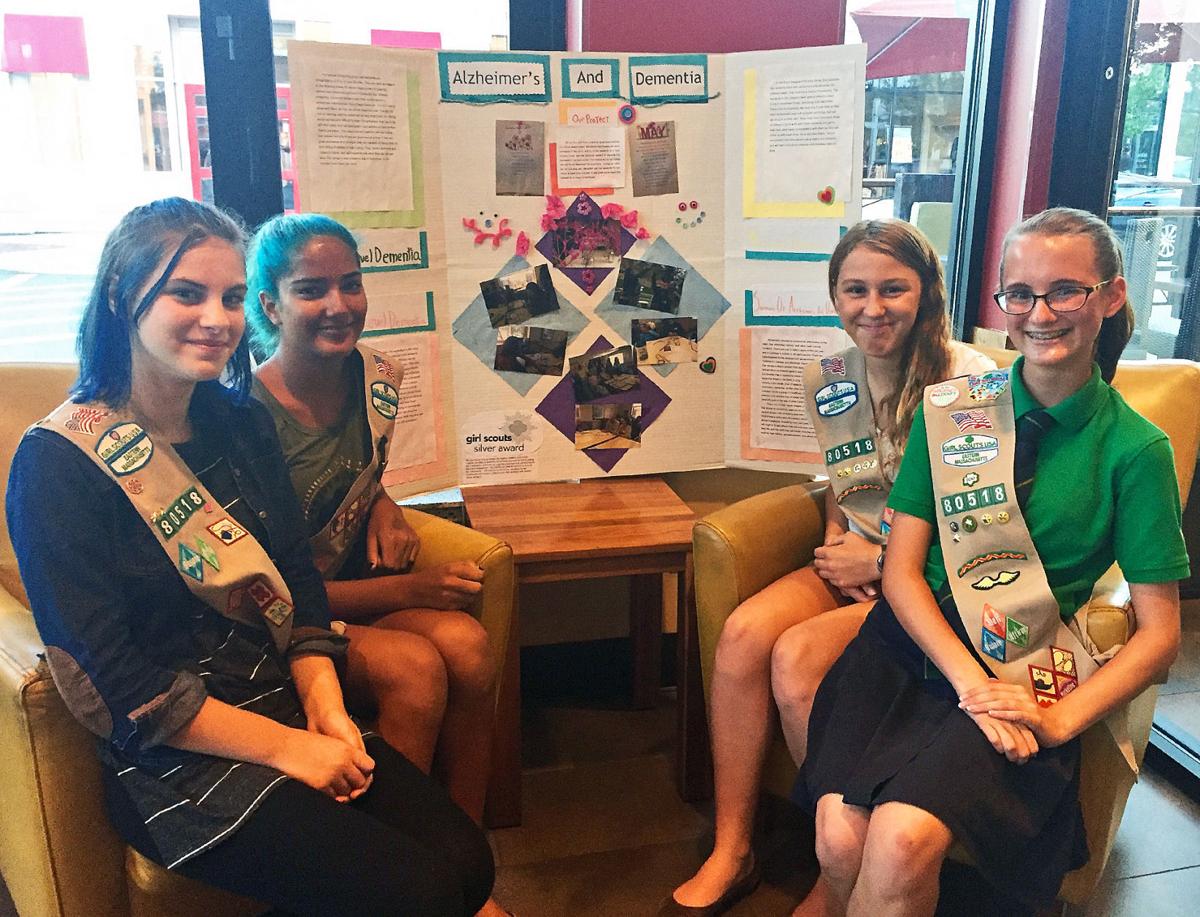 Girl Scout cadettes (from left) Sierra Sullivan, Lily Scott, Maria Armitage and Siobhan Morris spent 50 hours outside of school working on their Silver Award Project on the topic of dementia. 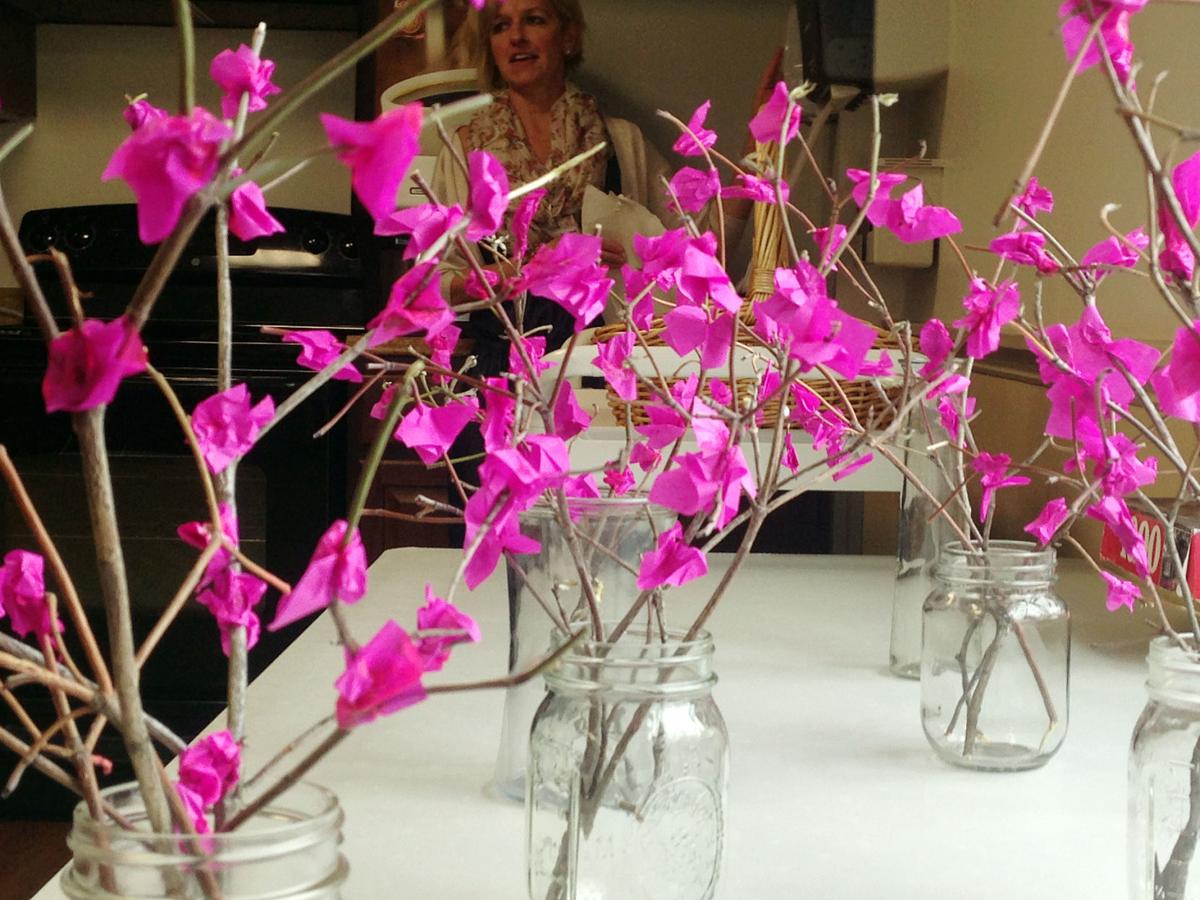 Girl Scout cadettes (from left) Sierra Sullivan, Lily Scott, Maria Armitage and Siobhan Morris spent 50 hours outside of school working on their Silver Award Project on the topic of dementia.

A Girl Scouts project to raise awareness about dementia has benefited residents of local nursing homes, but it has also provided a learning experience for the four cadettes leading the charge.

In order to receive a Silver Award, a scout must complete a 50-hour service project, either independently or with others, that leaves a “lasting impact” on the community.

The girls first became interested in working with aging individuals when they went caroling at the Atria Woodbriar assisted living facility during the Christmas season. Employees at the nursing home were looking for volunteers, and it caught the interest of cadettes Maria and Lily; the pair soon drafted the help of fellow scouts Sierra and Siobhan, and the group collectively decided to make nursing home residents the focus of their Silver Award project.

During an interview at Panera Bread in Mashpee Commons recently, Girl Scout sashes decked with colorful badges and shining pins were strewn across the table as the four girls settled into chairs to describe their project.

Somewhat shy at first, the four were soon talking over one another to share stories about the residents they had met.

“It kind of grew into being about Alzheimer’s and dementia, the more we learned about it and the people,” Maria said.

The team spent several meetings researching dementia and writings essays on different aspects of the topic, and then prepared a poster board to feature in the Falmouth Public Library.

The cadettes also started an afterschool club to visit the Royal Megansett Nursing & Retirement Home in North Falmouth, which they said receives fewer student volunteers than Atria Woodbriar. Although no other students joined their efforts, the four girls faithfully visited the nursing home every week in the spring.

The cadettes were able to design their own craft projects for residents in the dementia unit as part of the Royal Innovation: Alzheimer’s Care program. They mined the Internet for project ideas, such as bird feeders made out of pipe cleaners and Cheerios, painted rainbows with cotton ball clouds and pink paper flowers attached to wooden branches set up in mason jars.

The four also participated in scheduled activities, including “chair Zumba,” which Maria reported was not particularly taxing for young people.

When asked what the most difficult part of the project was, the cadettes unanimously agreed that connecting with the residents was a struggle.

“Well, I mean they were all nice, but we’re not the best at talking,” Sierra said, laughing.

Despite the challenge of connecting with the adults, the girls also said those conversations were the most rewarding aspect of their work.

“I think my favorite part was hearing what they had to say about when they were younger,” Sierra said.

The group grew animated as they remembered the residents’ stories: Lily recalled a female resident who had worked at the Pentagon, and the cadettes were all impressed with one woman who had 13 children—and remembered all of their names.

Many of the female residents used to be in the Girl Scouts themselves, back when cadettes were called “bluebirds.”

“I love Joe!” Lily said at the mention of his name, smiling. “He said I reminded him of his daughter.”

Residents and employees of the nursing home alike were disappointed to see the cadettes go at the start of the summer.

“[The employees] told us that we were helping a lot, because they were seeing them interact more and engage with the crafts,” Siobhan said.

“I guess they just liked to have visitors.” Sierra added.

Much like in the nursing home, the cadettes’ favorite thing about the Girl Scouts is getting to know one another and having fun with crafts—especially when there is glitter involved.

“Most of our posters end up covered in glitter,” Maria said. “My mom stopped letting us use glitter because we used way too much.” Maria’s mother, Alexandra H. Armitage, is the group’s troop leader.

Ms. Armitage said she has seen a resurgence in the Falmouth Girl Scouts since she and Maria moved to Falmouth four years ago.

The social aspect of the Girl Scouts may speak to its growth. Lily, too, joined the troop after recently moving to Falmouth, and Ms. Armitage said the troop has been a good place for the girls to make new friends.

“I think it was helpful for them to feel like they had a place they belonged,” she said.

Although the Girl Scouts are most popular for girls in Kindergarten through 6th grade, sticking with the Girl Scouts in middle school may provide a supportive community during a pivotal stage in adolescents’ lives.

A large body of research shows an overall self-esteem gap between girls and boys as they enter adolescence, and the Girl Scouts of the USA report that those years see a jump in female depression, suicide and eating disorders.

To fight against those statistics, the Girl Scouts attempt to send the message to young girls that “intelligence is cool” and leadership comes in all forms.

“Definitely one of the things Girl Scouts promotes is girl leadership. They really encourage girls to plan their activities and to organize them themselves and run them themselves,” Ms. Armitage said.

The Girl Scouts of the USA believe that the positive results of an emphasis on leadership are self-evident: every former female secretary of state is a previous girl scout, and so were 70 percent of the women in the United States Senate.

The Falmouth cadettes of Troop 80518, however, are preoccupied with surviving freshman year.

The four girls are hopeful that the afterschool volunteer club they established will continue at Lawrence School this year, but three of the girls have moved on to high school: Maria and Lily now attend Falmouth High School, and Sierra is enrolled at Sturgis Charter Public School West. Siobhan will continue to hold down the fort at Lawrence School.

The new schools are a little daunting for the newly minted freshman.

“It all looks exactly the same,” Maria said of the Falmouth High School building. “And people are really tall,” Lily added.

Despite the split, the four cadettes will continue to meet up at weekly troop meetings.

For all their hard work in the nursing home, and for their expertise in handling glitter, the four cadettes received their Silver Award certificates in the mail last week, along with new pins for their sashes.

As they enter a new season in their lives, they know exactly what to expect in the troop: it is on to the Gold Award project.

“We should definitely start working on that,” Maria said.