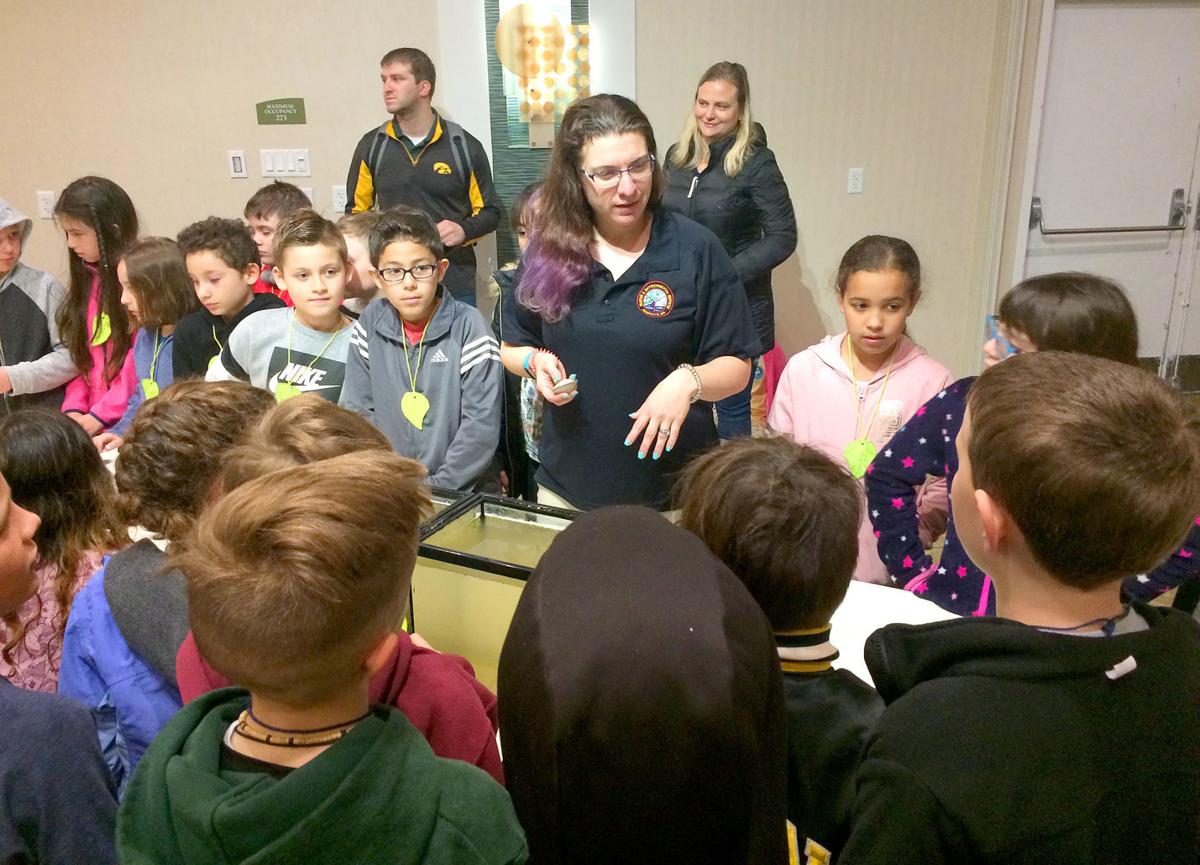 Christina Lovely, biologist for the Falmouth Marine and Environmental Services department, teaches a group of Falmouth 3rd graders about the water-purifying abilities of shellfish such as oysters and quahogs. 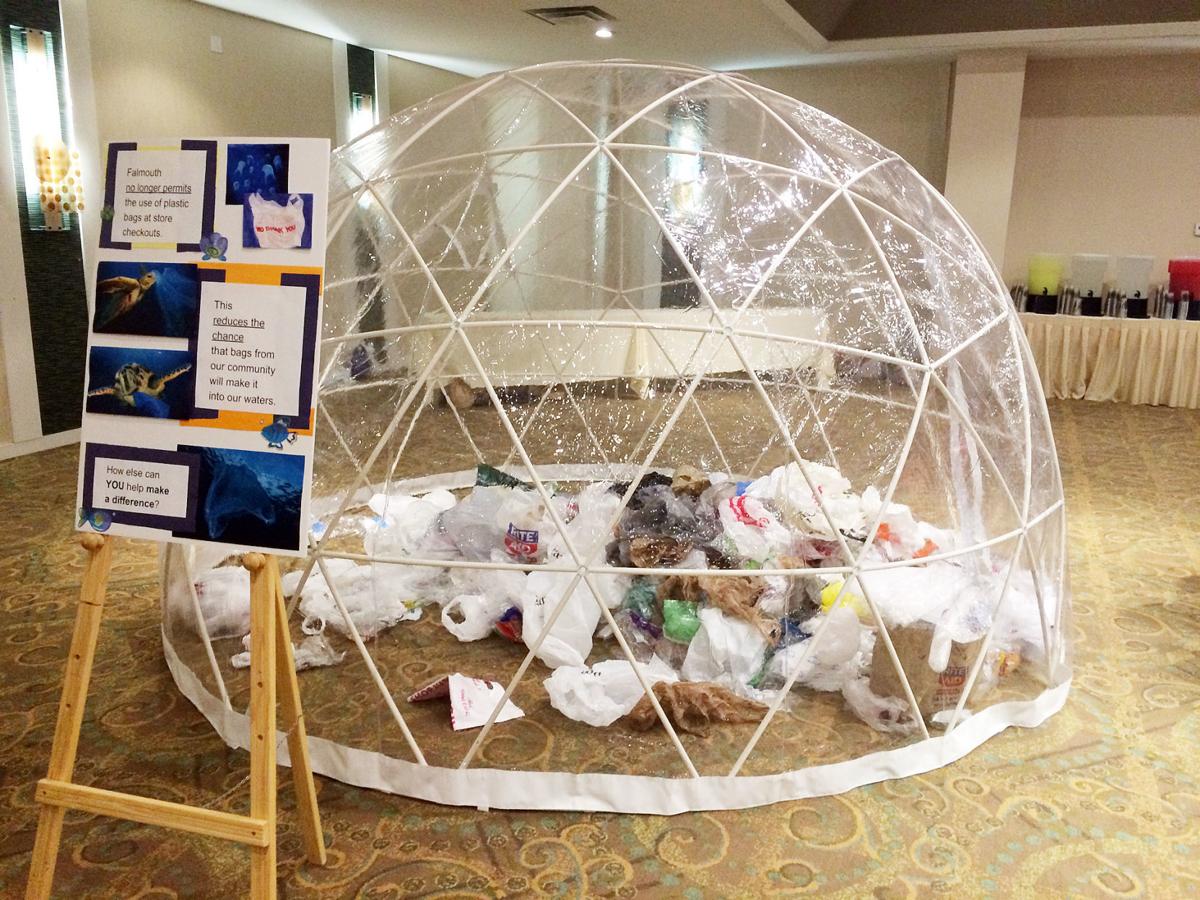 Falmouth 3rd graders collected plastic bags from home and added their contributions to a dome provided by the Sea Crest Beach Hotel. Students counted each classroom’s contributions as part of a recycling and math project.

Christina Lovely, biologist for the Falmouth Marine and Environmental Services department, teaches a group of Falmouth 3rd graders about the water-purifying abilities of shellfish such as oysters and quahogs.

Falmouth 3rd graders collected plastic bags from home and added their contributions to a dome provided by the Sea Crest Beach Hotel. Students counted each classroom’s contributions as part of a recycling and math project.

Sea Crest Beach Hotel in North Falmouth opened its doors to all Falmouth 3rd graders and their teachers for an Earth Day celebration Monday, April 22.

A sudden steady rain curtailed planned outdoor activities on the beach, but Sea Crest staff quickly directed the 260 students indoors to one of the hotel’s conference spaces. During the three-hour event, groups moved around a series of stations that included a recycling relay race, cornhole games, a math exercise that involved collecting and counting plastic bags in a large see-through dome, and the chance to see the Town of Falmouth’s new environmental patrol boat.

Christina Lovely, a fisheries biologist for the Falmouth Department of Marine and Environmental Services, demonstrated how the town is using oysters and quahogs to filter and clean its nutrient-loaded estuaries.

One of the event’s organizers, John J. Furnari—the Sea Crest’s operations manager and a Falmouth School Committee member—said that the Sea Crest and its parent company, Delaware North, were happy to host the 3rd graders from across the school district as part of its “GreenPath” environmental stewardship program.

“We’d love to host the 3rd graders every year. That’s the age when students really start to learn about the world around them and about being good stewards of the environment,” he said. “Chef Glenn, for instance, is teaching them, ‘We live on Cape Cod. Wouldn’t it be great to still have cod to serve years from now?’ With the dome exercise, we asked the students to bring in plastic bags from home and we’re teaching them about how to take as many plastic bags out of circulation as we can. We also learned that it can be challenging to find a plastic bag at home, which is great and shows that the town is doing a good job already.”

While Earth Day has been in existence since 1970, Falmouth Public Schools Superintendent Lori S. Duerr said a focus for young people today is on sustainable products, foods and materials.

“As part of the 3rd grade standards, we’re trying to get young minds at 3rd grade starting to think about the idea that we can help our Earth just by little things, like reducing plastic water bottles and bags, that kids can do now at their age and that they can then share with their parents,” she said.

Chef MacNayr said the students should remember that while cod tastes good, there are many other, more sustainable options such as redfish and hake.

“My message to you is it’s okay to be adventurous; it’s okay to eat other fish; it’s okay to try new things; it’s okay to help sustain codfish,” he said. “As the chef of the restaurant of a big hotel, I’m not going to use cod on my menu this year. I’m going to be using a fish called hake. It’s going to sustain codfish so that we have it for future use, and it’s also going to help educate people, to help them try a type of fish they might not have tried.”

“Oysters have an amazing filtering capacity, and we can actually use these animals to clean up our impacted estuaries. So by modeling that oysters can clean up the water by filtering phytoplankton out of the water in the tank where they’re present, we can make these kids aware of the important role that oysters have as ecosystem engineers,” she said.

In the hallway outside the conference space, Mr. Martinsen asked a group of students what they thought he did each day in his job as deputy director of marine and environmental services.

Mr. Martinsen said he has never seen a bear in Falmouth, but he did see a manatee in Falmouth waters in recent years.

“Somebody called our office and said, ‘There’s a manatee in Falmouth,’ and I laughed at him, but sure enough, we went down to the water and found a manatee, a sea cow that swam up from Florida and weighed hundreds of pounds,” he said.

When the topic turned to fishing, Mr. Martinsen explained that his department tries to keep people from catching younger, smaller fish.

“If we want to keep having those fish for our kids and our grandchildren and people in the future, we want to have those animals reproduce and to make baby fish. If people catch those smaller fish, that won’t happen. That’s one of the most critical things that we do is protect those smaller animals to give them a chance to spawn,” he said.

After talking briefly about life-jacket safety and his work helping animals, he led the group outside to see Falmouth’s newest patrol boat in the Sea Crest parking lot.