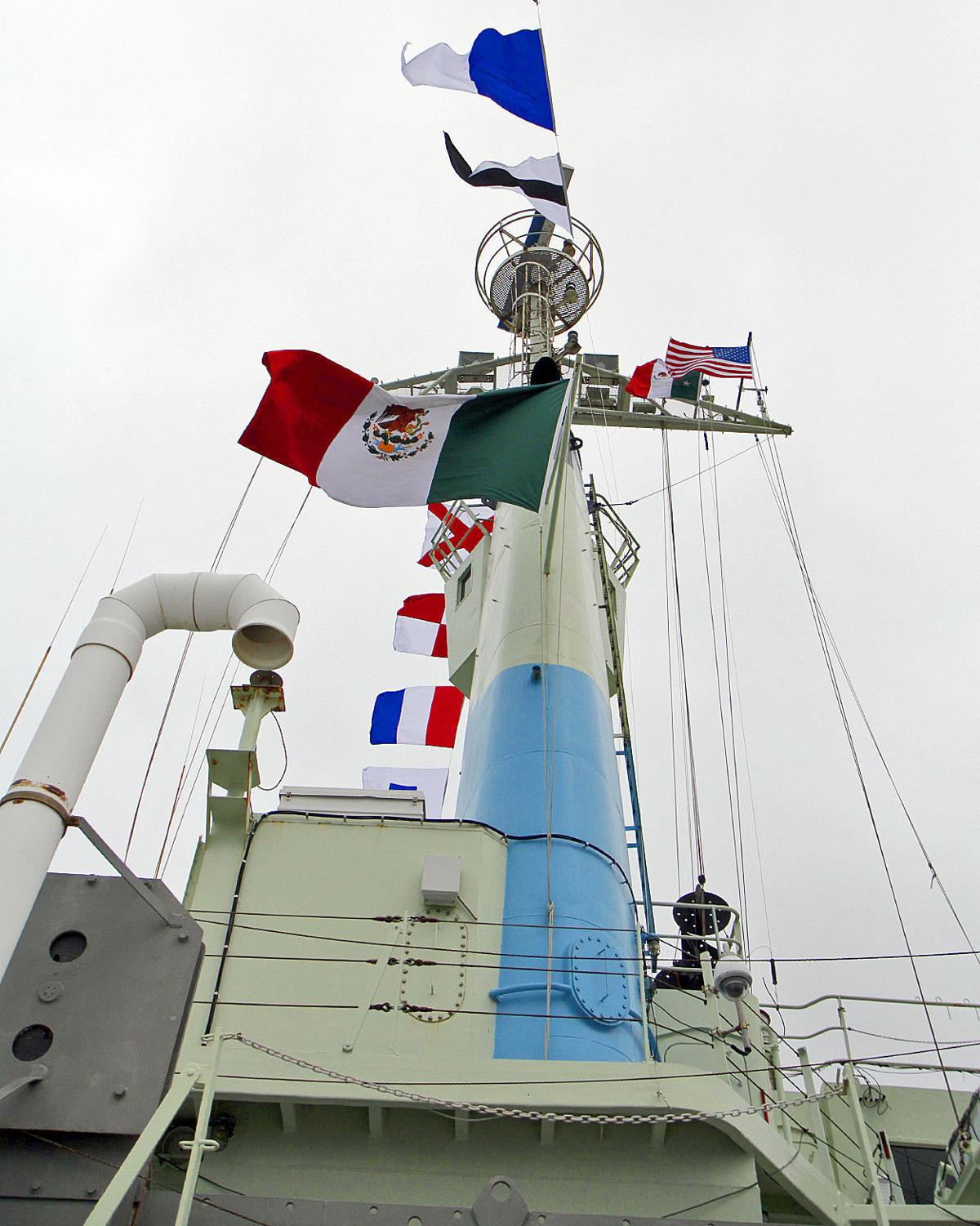 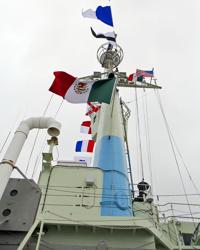 The Mexican flag flies high above the deck of the R/V Knorr, now known as the ARM Rio Tecolutla. The ship was officially transferred to the Mexican Navy in a ceremony Monday afternoon. 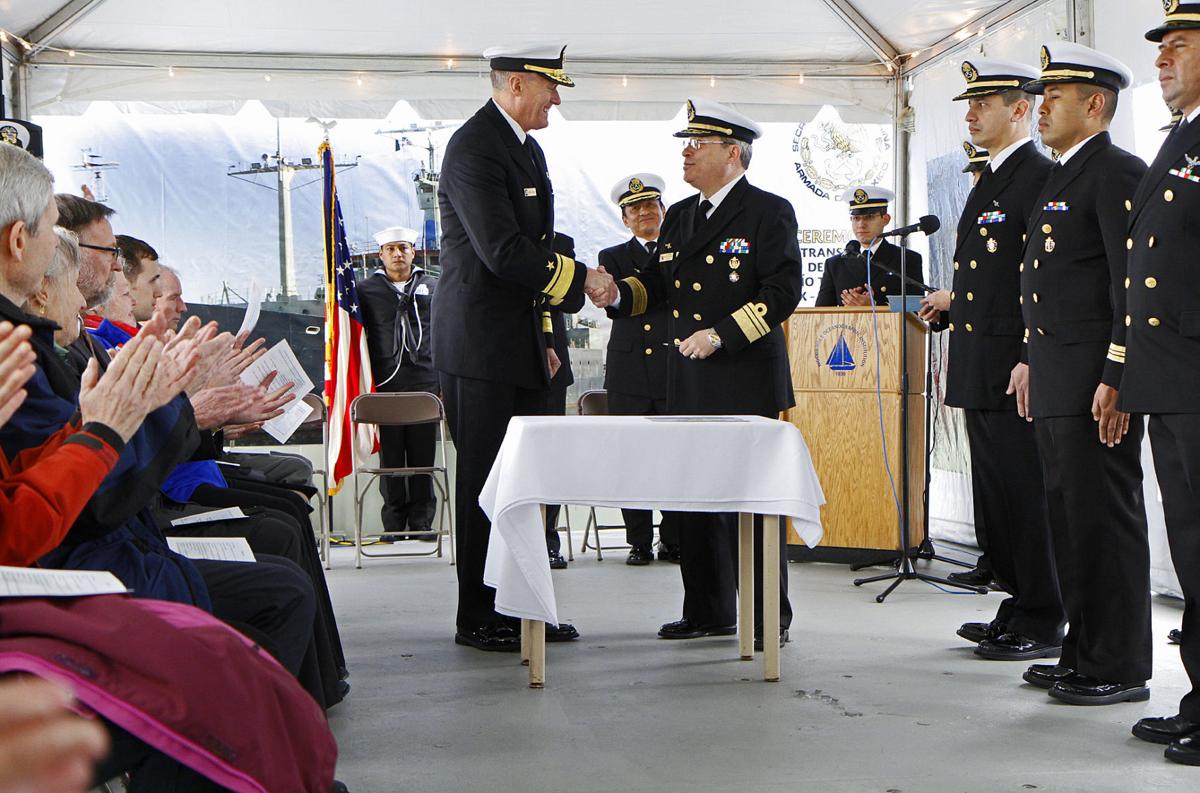 Rear Admiral Chris Sadler shakes hands with Vice Admiral Francisco Perez Rico, Naval attache to the Mexican Embassy in Washington DC, after signing the transfer of the ship R/V Knorr to the Mexican Navy. The ceremony took place on the deck of the ship at the WHOI dock on Monday afternoon.

The Mexican flag flies high above the deck of the R/V Knorr, now known as the ARM Rio Tecolutla. The ship was officially transferred to the Mexican Navy in a ceremony Monday afternoon.

Rear Admiral Chris Sadler shakes hands with Vice Admiral Francisco Perez Rico, Naval attache to the Mexican Embassy in Washington DC, after signing the transfer of the ship R/V Knorr to the Mexican Navy. The ceremony took place on the deck of the ship at the WHOI dock on Monday afternoon.

The Mexican flag flew from the ship known for the past 40 years as the R/V Knorr at the vessel’s transfer ceremony from the United States Navy to the Mexican Navy. The ceremony took place at the Woods Hole Oceanographic Institution dock on Monday, March 14.

The name Knorr has been painted over, and the vessel, now called the ARM Rio Tecolutla, set sail Tuesday afternoon for Veracruz, Mexico.

Representatives from WHOI, the US Navy and the Mexican Navy along with the ship’s crew and about 30 invited guests, sat under a tent on the ship’s deck to watch the ceremony, which began with the sound of a bosun’s whistle and introductions of the official guests, first read in Spanish and then translated to English.

Mark Abbott, WHOI president and director, welcomed the guests, speaking briefly about the history of the vessel that arrived at WHOI in 1970.

Over the years the R/V Knorr, owned by the US Navy and operated by WHOI, traveled 1.3 million miles and on 250 missions, becoming a significant contributor to the scientific research culture at WHOI and nationwide.

“Our time with the Knorr is now done; congratulations and smooth sailing to the people of Mexico,” Dr. Abbott said.

Rear Admiral Chris Sadler, reserve deputy director, Maritime Operations, US Fleet Forces Command, spoke about the significant discoveries made with the R/V Knorr that included deep ocean thermal vents in 1977 and the Titanic in 1985.

The US Navy has supported scientific research since after World War II with its fleet of vessels operated by difference institutions throughout the country.

The ship was named after Ernest R. Knorr, who was appointed chief engineer cartographer of the US Navy hydrographic office in 1860.

“From one mariner to another, you are getting a fine ship,” Admiral Sadler said before he and Vice Admiral Francisco Perez Rico, Naval attache to the Mexican Embassy in Washington, DC, signed the transfer certificate.

The ship is to carry on the work of Ernest Knorr, doing hydrographic and bathymetric measurements mapping the sea floor, and joins a fleet of four other scientific vessels owned by the Mexican Navy.

“The receipt of the Knorr represents a singular importance synonymous with strength and opportunity in the area of oceanographic research,” said Rear Admiral Fernando Alfonso Angli Rodriguez, deputy director of oceanography, hydrography and meteorology with the Mexican Navy.

“It’s an honor to be on a vessel with a lot of history,” said Lieutenant Francisco Ortiz after the ceremony.

A total of 40 crew members came to Woods Hole in the past month to train on the ship. Lieutenant Ortiz said more crew are to be added once the ship arrives in Mexico.

“It’s definitely melancholy to see her leaving, but we know that she is going to be in good hands,” Dr. Abbott said.

WHOI is now anticipating the arrival of the Knorr’s replacement, the R/V Neil Armstrong, which is to arrive in the spring.