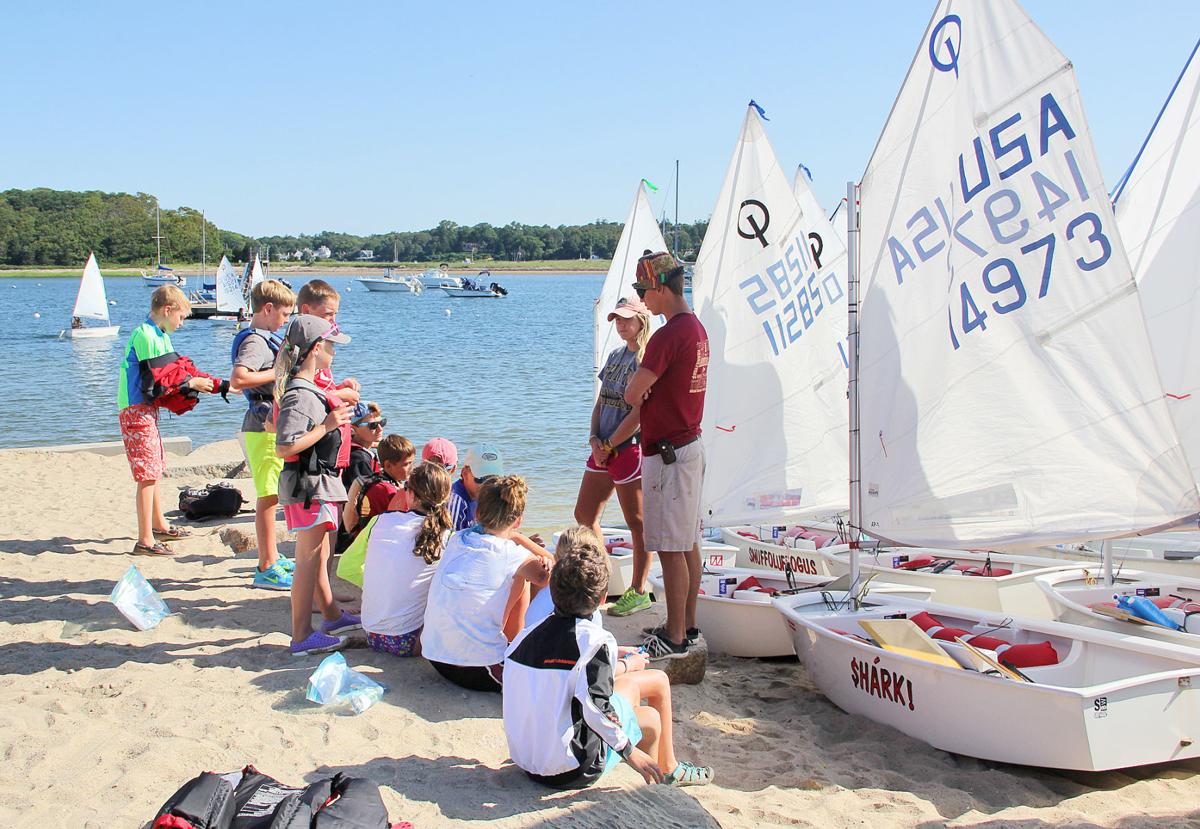 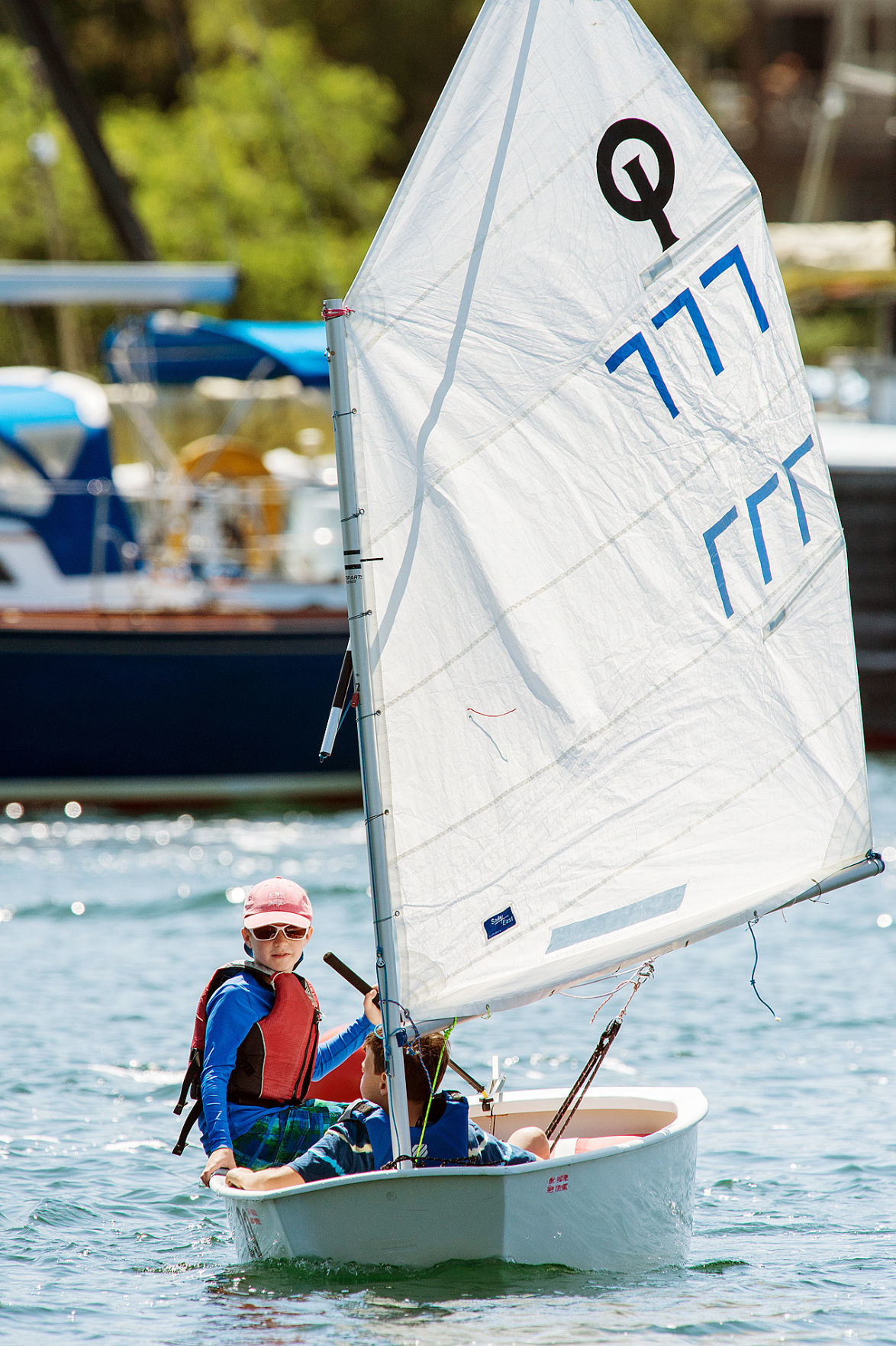 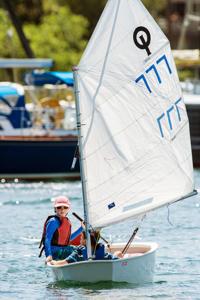 For more than 70 years, the Quissett Yacht Club has taught children to sail in the protected waters of Quissett Harbor on Buzzards Bay.

In boats provided by the yacht club and in an indoor and an outdoor classroom in one wing of the grand old hotel owned by the Quissett Harbor House Land Trust, children from age 8 through the last year of high school learn “the joy of being on the water while learning the basics of sailing at their own pace,” the program flyer says.

Many of these students go on to sail in college, the yacht club’s Vice Commodore Weatherly B. Dorris said. “Sailing is a great college sport and it’s co-ed. There aren’t many co-ed sports out there,” she said.

Ms. Dorris, who was born during the 1962 America’s Cup Race and named after that year’s winning boat, learned to sail at the Quissett Yacht Club sailing school, as did her children.

Yacht club Commodore John R. (Randy) Evans, whose children also learned to sail at the yacht club, said the club wants to get the word out that sailing classes are beginning soon and are open to yacht club members as well as nonmembers. The junior sailing program is made up of about half of each.

Ms. Dorris emphasized that enrollment for sailing classes at the yacht club, which begin Monday, June 24, is open and ongoing throughout the season. It is never too late to register, she said.

“This little yacht club has been teaching kids for a long time. It is a local program with a long tradition that welcomes new sailors,” he said.

Children learn first on an Optimus Pram, or “opti,” which is a model used all over the world to teach youngsters to sail, Ms. Dorris said. These boats are shaped like a shoe box and can hold two children at a time until they are brave enough to sail solo.

“We use them for the youngest students. They give the kids the confidence to sail on their own,” she said, remembering her own experience of sailing in the club’s first optis, which were made of wood and named after the seven dwarves.

When young sailors get older and heavier, they move to the two-person 420, which is named for the overall length of the boat in centimeters. It is an international racing class boat used in high schools and colleges.

Of his experience learning to sail at the Quissett Yacht Club, 14-year-old Alden Burt said, “What I like about Quissett sailing is that anyone can come and learn. I look forward to going every day.”

The Quissett Yacht Club sailing program offers a variety of options and an abundance of racing opportunities at various skill levels.

Students who want to learn to sail and race sailboats can sign up for one or both of the summer’s one-month sessions.

Students who want to learn to sail but are not interested in racing can attend the Adventure Sailing Programs and sign up one week at a time. These classes are also good for families who might only be staying on the Cape a week or two.

“We provide the boats, and that is key,” Mr. Evans said of the junior sailing program, which is an “all-weather” program.

“The only investment the students have to make is in a life jacket, a whistle and a hat,” Ms. Dorris said.

“We have a longstanding tradition of working with the Falmouth Public Schools to identify candidates (for the scholarships),” Ms. Dorris said.

The two scholarships that have been awarded for this season have gone to a student in the 420 Introduction class and a student on the race team, who is also now a junior instructor.

Sailing program director Quentin Chafee was previously the assistant sailing coach at Brown University and is currently the head coach at Eckerd College in St. Petersburg, Florida. Sailing instructors are graduates and current members of the sailing program.

Students are taught boat safety, seamanship and rigorous sailing knowledge, with an emphasis on having fun in the boats, Mr. Evans said.

Several times during a session, Mr. Evans said, students are taken for a sail in a club member’s Herreshoff 12 1⁄2 to “introduce them to the fleet,” and give them the feel of sailing in the larger boats. Herreshoff 12 1⁄2s have been raced continuously in Quissett Harbor since they were first built in 1914.

Members of the Quissett Yacht Club pride themselves on being a close-knit community which “delights in welcoming new sailors,” the website states.

“Our members are committed to continuing time-honored traditions, exploring news ways to expand their love of sailing and classic wooden boats in particular and to preserve our unspoiled environment.”

Questions can be directed to Camilla King, who can be reached at camillaking@verizon.net or 508-574-2602.