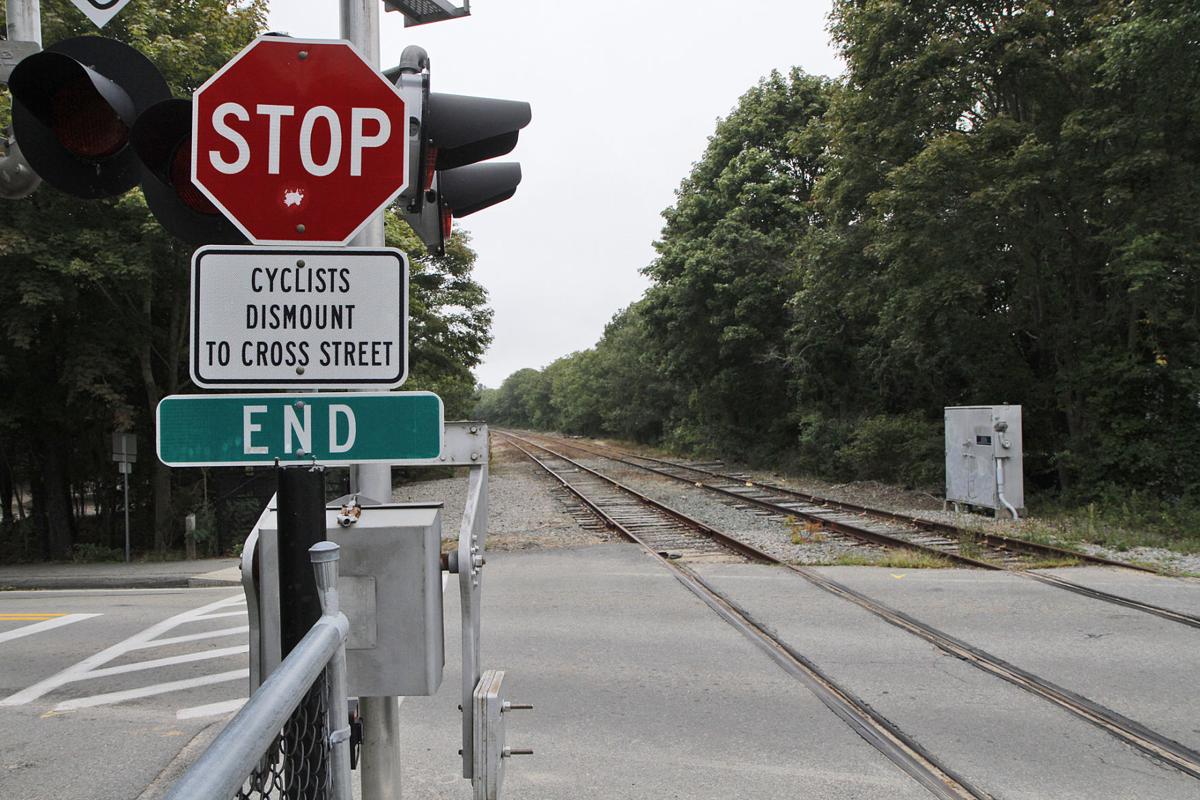 The end of the Shining Sea Bikeway in North Falmouth shows the train tracks heading toward Bourne. 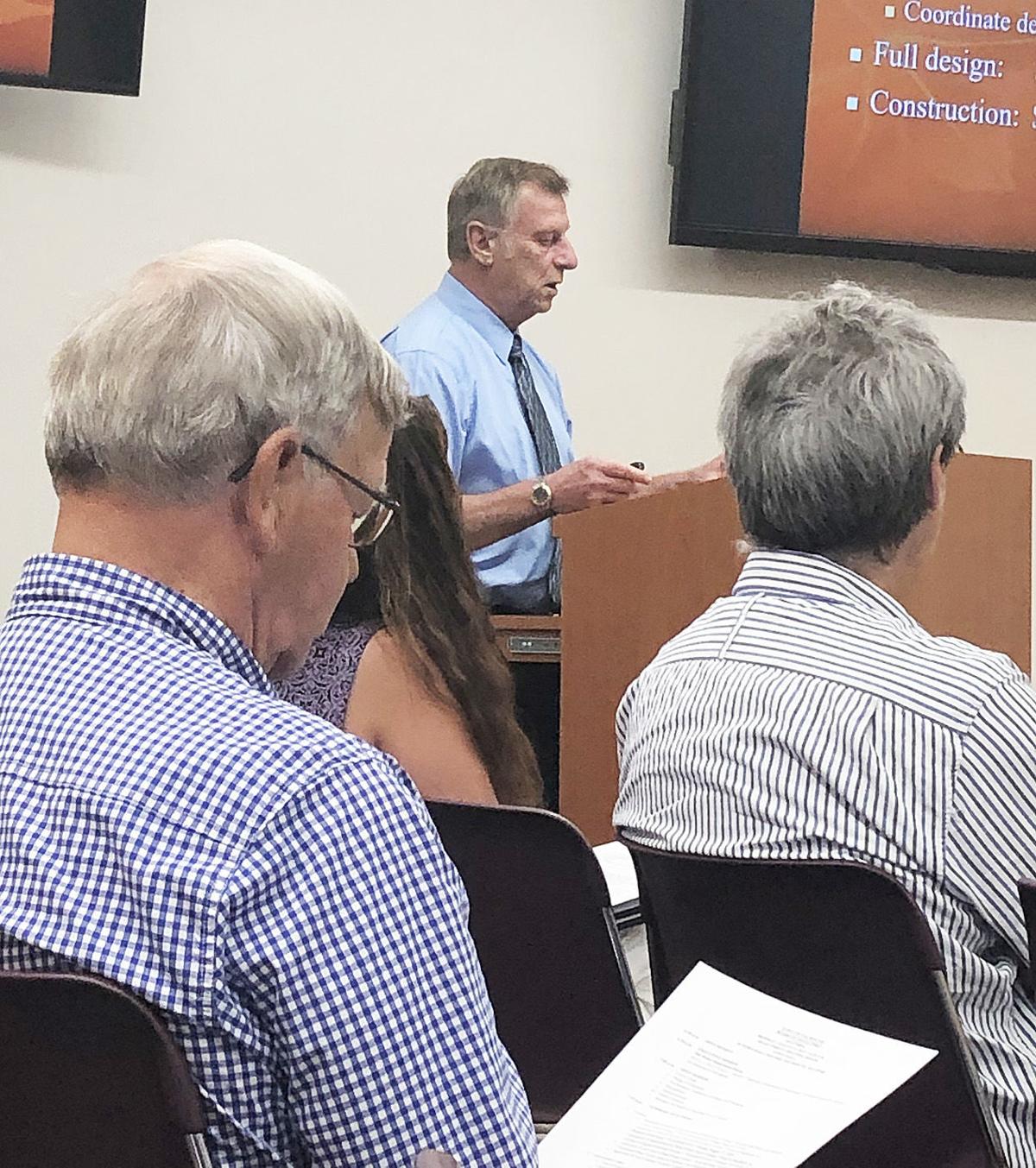 Raymond Jack, Falmouth DPW director, presents to selectmen about an extension to the bike path between Bourne and North Falmouth.

The end of the Shining Sea Bikeway in North Falmouth shows the train tracks heading toward Bourne.

Raymond Jack, Falmouth DPW director, presents to selectmen about an extension to the bike path between Bourne and North Falmouth.

The Falmouth Board of Selectmen affirmed Community Preservation Committee funding of $694,000 for the design of the North Falmouth Bikeway Extension Monday, August 5.

The overall project—a collaboration of the towns of Falmouth and Bourne and the Massachusetts Department of Transportation—aims to create a recreational corridor from the Cape Cod Canal to Vineyard Sound.

Director of Public Works Raymond A. Jack said the plan is to construct a 10-to-12-foot-wide bike path 0.7 mile in length from County Road to the North Falmouth-Bourne line. It also includes a dirt parking lot on County Road.

“This will have a number of improvements to that parking area,” he said. “We intend to work closely with the Town of Bourne on this. They have been looking at this initiative for a number of years. Their extension is going to be in the range of about 6.5 miles. They are currently working on phase one of four phases, with the design and permitting concurrently, starting in the canal area and coming south.”

Falmouth’s involvement of the project will come in the fourth and final phase, Mr. Jack said.

Because of physical constraints at certain points along the bikeway, the bike path will narrow from 12 feet to 10 feet in width.

The construction of the North Falmouth extension would be done under MassDOT at a cost of about $5.4 million, he said.

“Why are we doing this? It provides a safe, natural-environmental, recreational experience for all people of all ages and abilities. It expands our recreational inventory for cyclists, pedestrians, hikers, rollerbladers and cross-country skiers,” Mr. Jack said.

The existing bike path in Falmouth is 10.7 miles in length, and with the extensions in North Falmouth and Bourne, the total length of the contiguous bike path will be 18 miles.

While the primary purpose of the bikeway is recreation, it also serves as a pathway for commuters, Mr. Jack said, noting that a fence will separate the bike path from an active train line along County Road.

The Department of Public Works plans to pave the County Road parking area and “will be creative” about maximizing the number of parking spaces in the lot, Mr. Jack said.

Regarding the project’s overall cost, he said that if all four phases of the project, for the entire length of the extension, were completed at the same time, the total cost would be approximately $6 million.

“It’s going to be very challenging. There are a number of different wetlands issues. Sections one and four are the easy parts. It’s two and three that are the tough parts,” he said. “Our particular section does call for a bridge to go across the existing train bridge on Old Main Road.”

Beyond the town-funded design money, the rest of the funding for the project would come from MassDOT STIP, or state transportation improvement program, funding, Mr. Jack said.

“It runs concurrently with the local TIP, or transportation improvement program, for us. They have a separate segment on there that is for state initiatives, and phase one, which is currently under design for Bourne, has already been placed into that program under MassDOT, so we will be doing the same thing and my goal would be not to wait for all four phases for Bourne to be completed before we actually construct it,” he said.

This extension in Falmouth and Bourne will enhance the bikeway experience materially. Hats off to all those involved in its planning! Cornelius Hurley, North Falmouth

Glad to see that this will run parallel to the rail line. It makes no sense whatsoever to remove an active railroad line.