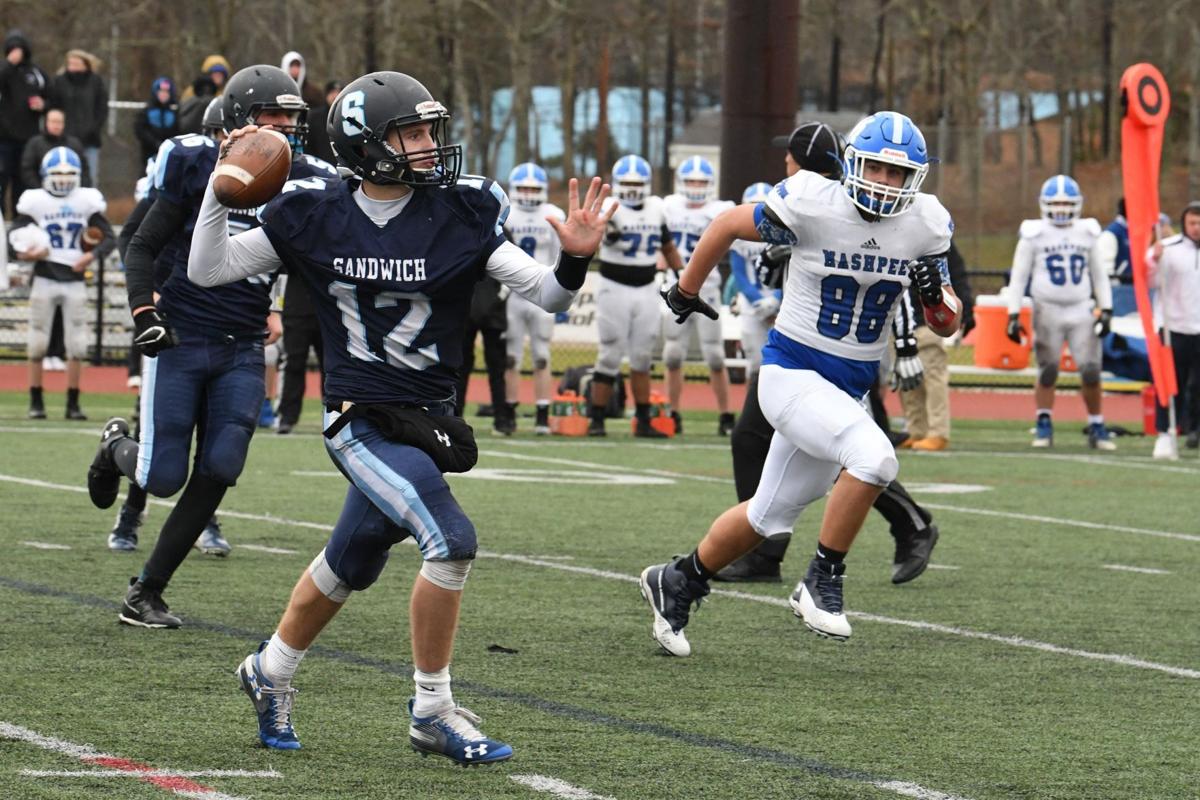 Sandwich freshman quarterback Tim Bengtson rolls out of the pocket to find an open receiver during the Blue Knights’ Thanksgiving Day game against Mashpee last year. 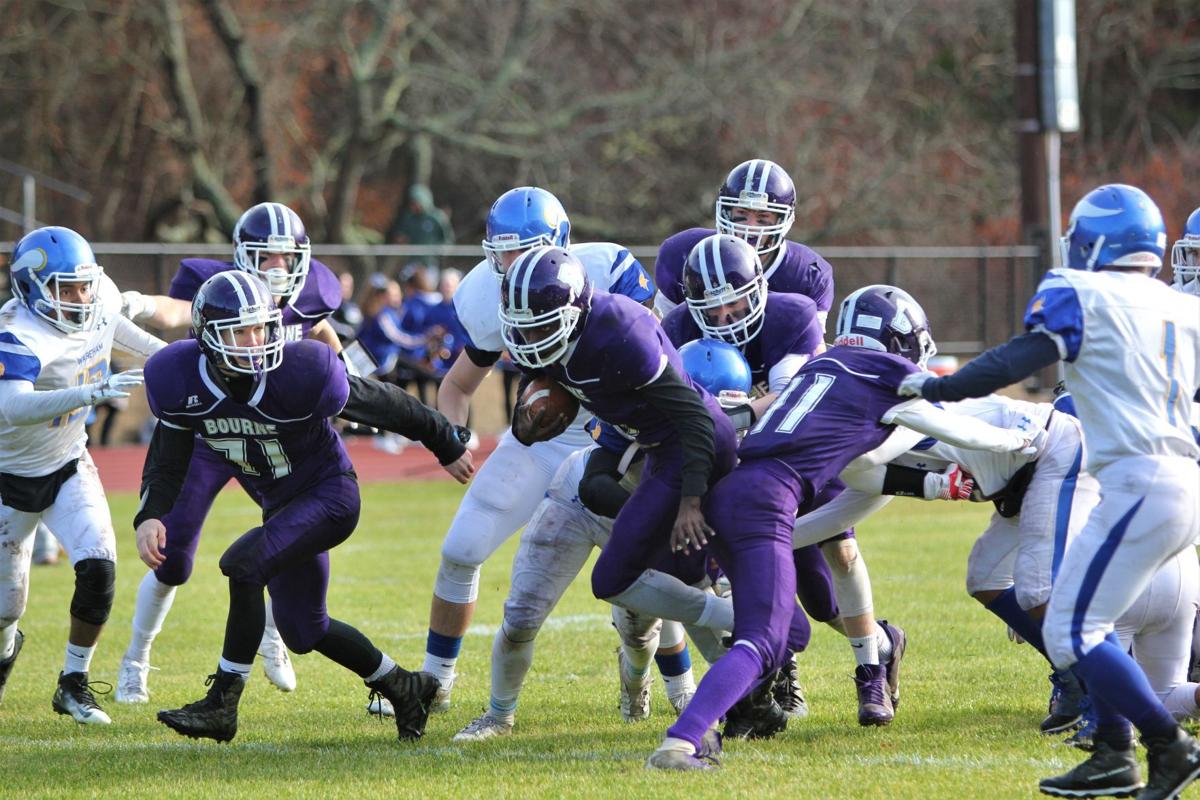 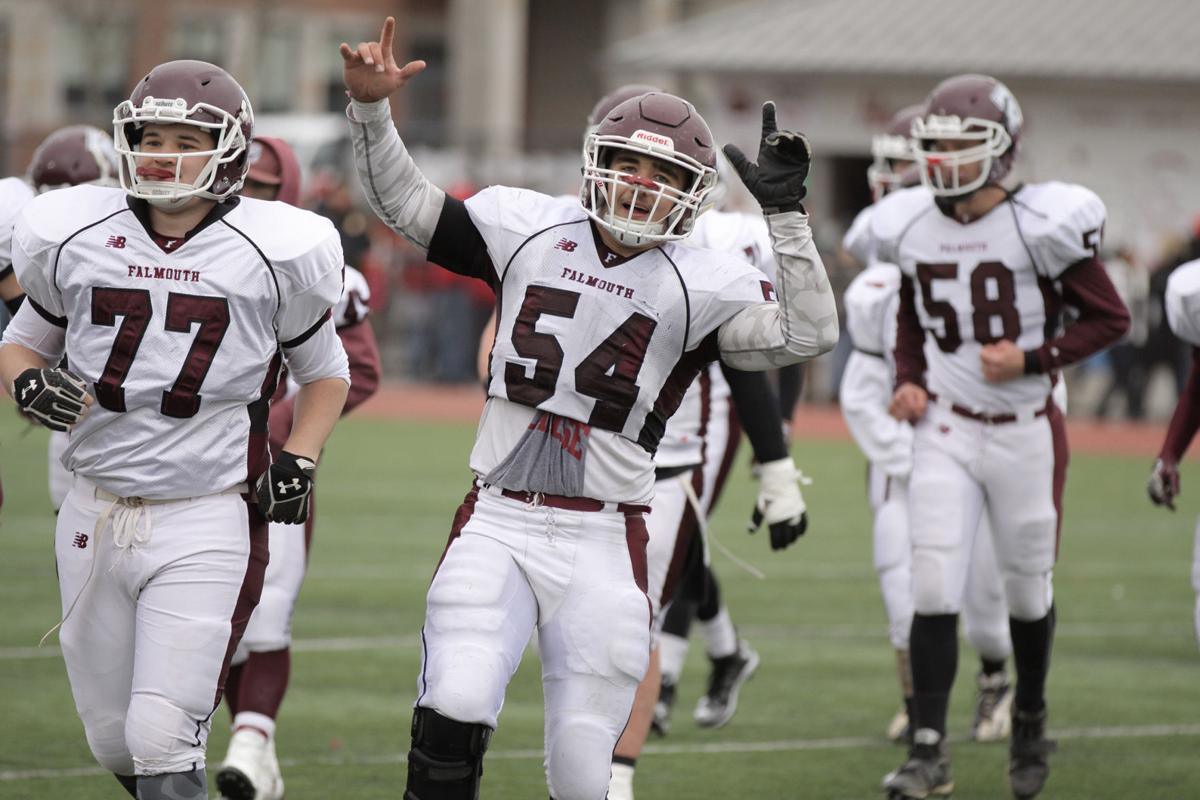 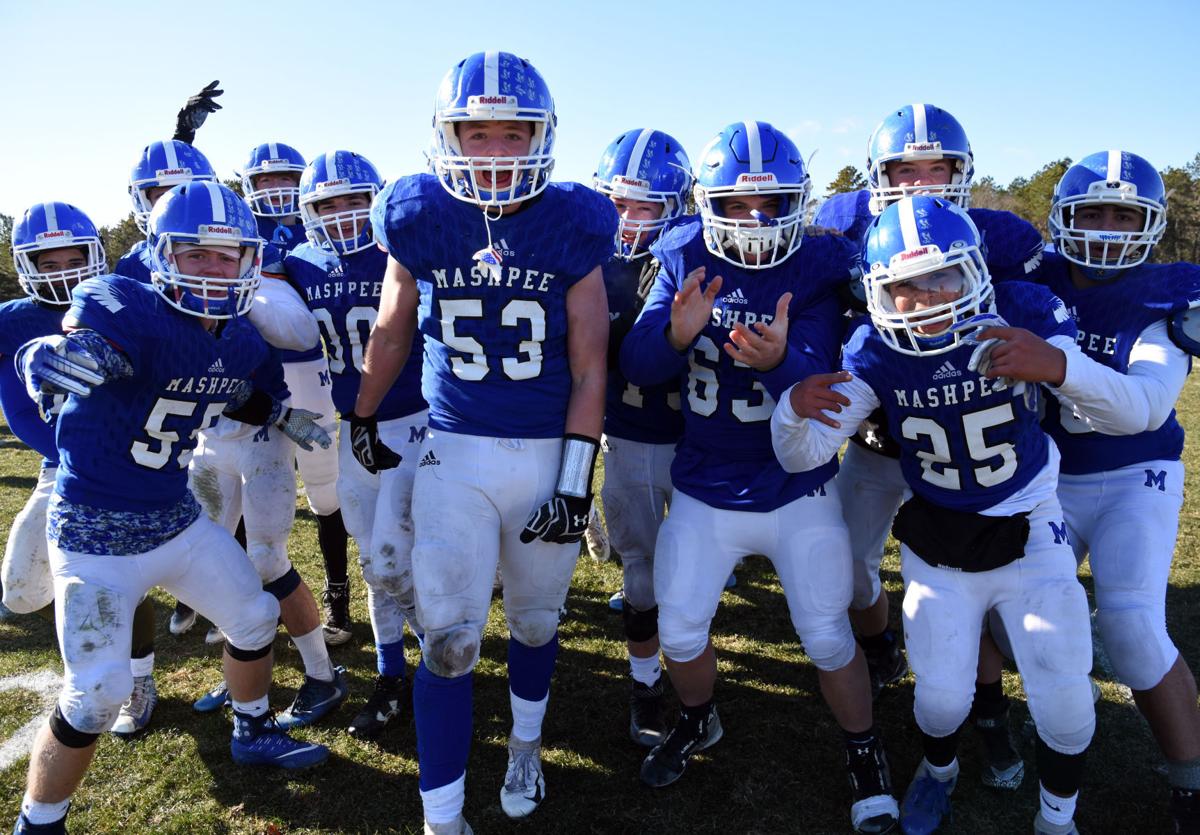 The members of the Mashpee High School football team were all smiles after knocking off Sandwich High School in the annual Cranberry Friendship Bowl at Michael Horne Stadium on Thanksgiving in 2017.

Sandwich freshman quarterback Tim Bengtson rolls out of the pocket to find an open receiver during the Blue Knights’ Thanksgiving Day game against Mashpee last year.

The members of the Mashpee High School football team were all smiles after knocking off Sandwich High School in the annual Cranberry Friendship Bowl at Michael Horne Stadium on Thanksgiving in 2017.

For more than three-quarters of a century there has always been at least one Falmouth versus Barnstable football game in a calendar year. Not since the 1943 game was not held because the nation was fighting World War II have the Clippers and Raiders failed to meet up to determine bragging rights for the calendar year.

Nearly all of the 76 games in a row that have been played have taken place on Thanksgiving Day. Inclement weather caused the postponing of a handful of games to later in the weekend that followed, but for the most part Turkey Day has been accompanied by one of the nation’s oldest rivalries being played in either Falmouth or Hyannis. Almost every year since 1895 there has been a game between the teams.

Mashpee and Sandwich do not have the same depth to their rivalry, but the Falcons and Blue Knights have been laying the foundation for a long-tenured border war. The two teams have met 17 times on Thanksgiving, and each of the past 10 years. The Knights would have been looking to end a four-year Mashpee winning streak.

Those rivalries have hit the pause button for 2020. There was no fall football this year, and the games are being postponed until the spring, of Fall II, season. In the case of Falmouth versus Barnstable, the teams may meet twice this spring, with games at each team’s home field. Should life get back to normal by this time next year, that would make for three football games between the two rivals in the calendar year 2021, which would be the most ever played in one year between the historic foes.

Joe Morency hoped that he’d be coaching on Thanksgiving when he accepted the job as head coach of the Clippers, but shortly after taking the job the season was postponed. Rather than putting his own spin on Falmouth’s traditional option attack offense this fall, he has been overseeing positional workouts with players and prepping for the coming season, which he hopes will be happening.

Morency, who came up through the FHS system as a player before taking on an assistant job after college, said that this Turkey Day is going to be “a strange one” for him.

“I think the last time I wasn’t at Falmouth-Barnstable was 8th grade, maybe,” he said. “Since 2001 I’ve been playing or coaching, or going when I was in college.”

Falmouth Athletic Director Kathleen Burke also said that this has been a weird holiday season for her. Typically in the week leading up to the big game she is busy delivering tickets to local businesses for sales, setting up game-day operations and just hoping that everything gets off without a hitch. Making sure that the details are taken care of before the 10 AM kickoff can be stressful, but once the ball is in the air, she can relax a little bit and watch the game unfold.

This year her focus will be somewhere else altogether.

Her counterpart in Sandwich, Neil Murphy, said that he will be enjoying his time with family as well, but will miss watching the Knights and Falcons go at it.

“All of the Thanksgiving games, they’re just fun. It’s a big part of the experience,” he said.

The experience, for Mashpee High AD and head coach Matt Triveri, revolves around the people that he works with and the kids who play for him. More than anything he said that he’ll miss that. His introduction to the Thanksgiving tradition came as a freshman at Barnstable High School when he was called up to the varsity team for the 100th-ever meeting between the Clippers and Red Raiders. After graduating from BHS with three wins in four games under his belt, he began student teaching and volunteering as an assistant coach. He’s been coaching every year since 1998.

“I think I’m going to have to put the kids in the back yard and make them play each other,” he said with a laugh. “It’s going to be weird not getting ready for the game and going to the field.”

Triveri said that the rivalry between MHS and SHS has not delivered many nail-biters, but that’s not the point to him.

“They’re kind of all the same in a lot of respects. It’s tradition. It’s getting together with the coaches before the game, and after,” he said. “That’s the stuff you remember: the people you spend the time with and work with.”