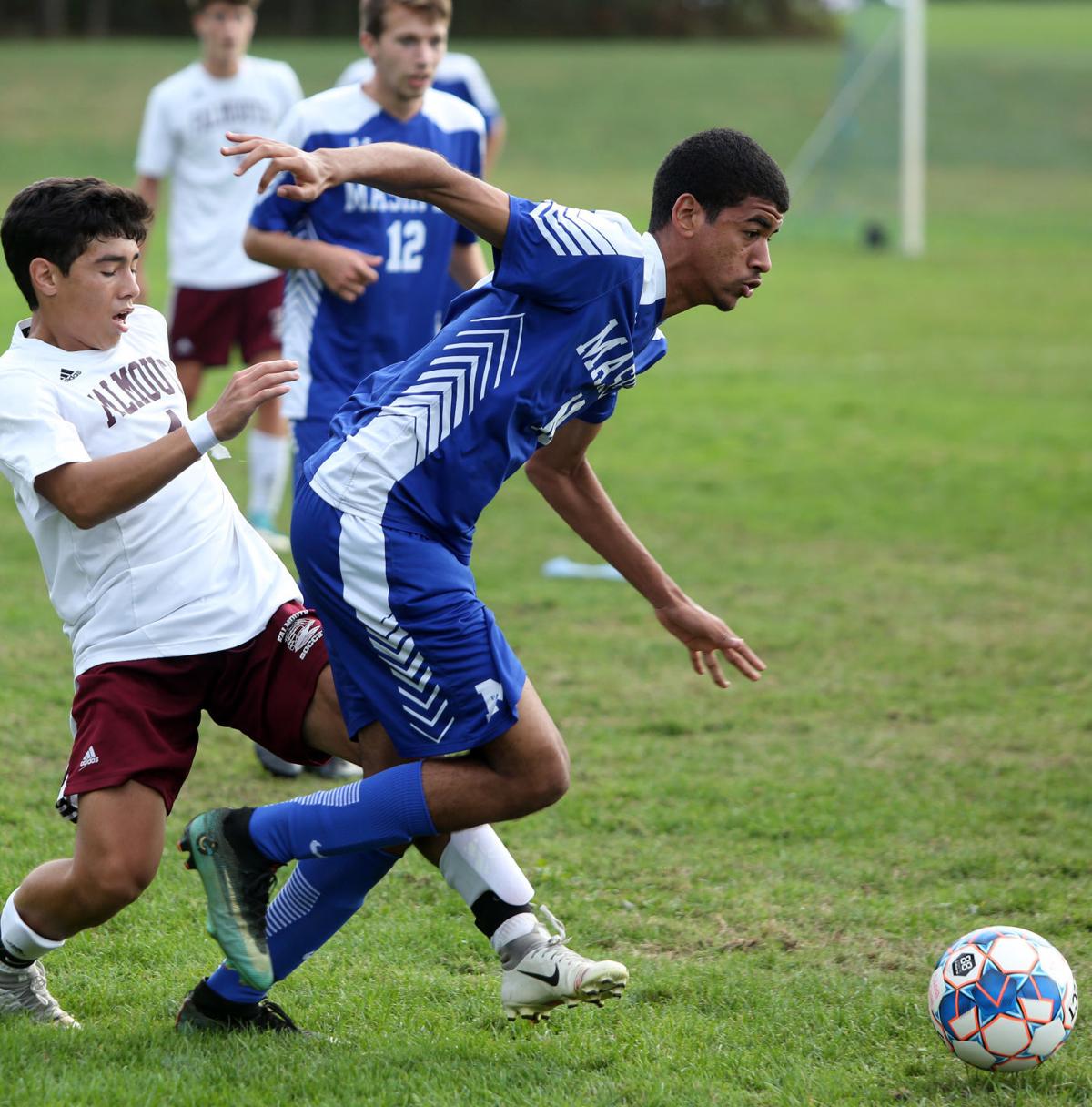 Mashpee High School’s Gabe Perreira moves the ball past a Falmouth defender during action at MHS earlier this week. 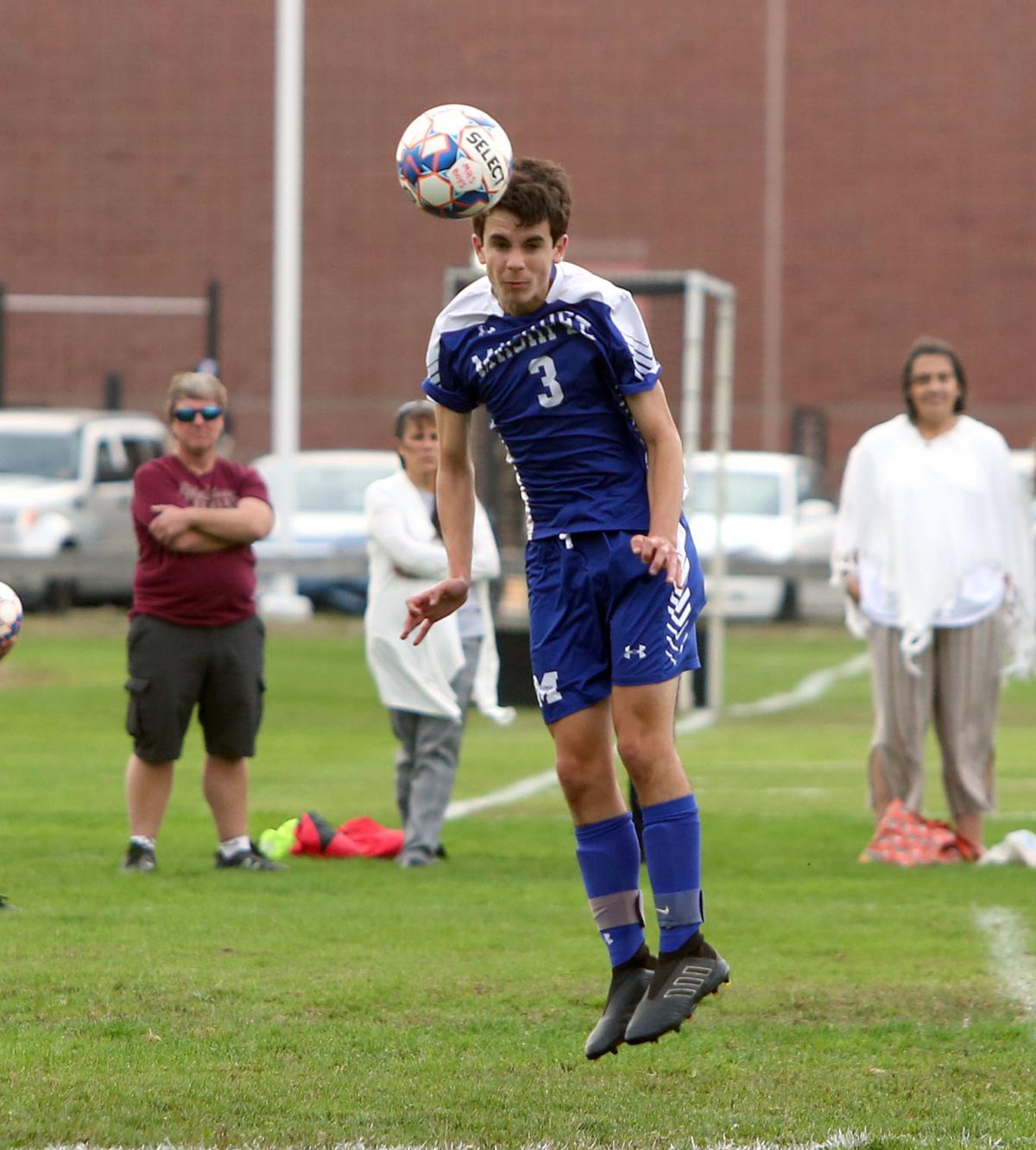 Midfielder Gabe Tellez gets up in the air to head the ball to a teammate.

Mashpee High School’s Gabe Perreira moves the ball past a Falmouth defender during action at MHS earlier this week.

Midfielder Gabe Tellez gets up in the air to head the ball to a teammate.

Sometimes after taking a tough loss the easiest way to rebound is to get right back out on the field. That was the case for the Mashpee High School boys’ soccer team just 24 hours after getting roughed up by neighboring Falmouth on Monday, October 7.

Mashpee was right back on the pitch against, visiting Hull High School, and survived a sometimes contentious affair with the Pirates in which Hull lost a player for the entire second half after he took some liberties along the sideline after Mashpee had scored the go-ahead, and eventual game-winning, goal. Gabe Palhais’s bomb from 40 yards away stood up the remaining 40 minutes and Mashpee scored its third win of the season, taking a 2-1 decision over the visitors from suburbs on Tuesday, October 8.

Palhais put home a long direct kick following a Hull foul just before the halftime whistle. The junior stepped into a long volley that he struck absolutely perfectly, banking it in off the bottom of the crossbar to put his team ahead.

After that, Mashpee tried to play ball control through the second half and did a good job of controlling the action until Hull made a last-ditch effort to tie the game in the last five minutes. During that portion of the game the contest hinged on the play of MHS goalie Luke Olson, who played like a Jedi to keep his team from coughing up the advantage.

Olson made three saves in the last three minutes that were all the difference. He robbed Max Iorrio on back-to-back bids to keep it 2-1. The first was a diving save, going to his right, that erased a shot that was labeled for the far corner. He then stopped another Iorio bid from in close, on the ensuing corner kick. With under two minutes to play he laid out to make another fantastic stop, this time robbing Sean Marois.

“He was the difference late in the game for sure,” Coach Ed Furtek said. “Will Baker played a great game. I put him on (Iorio) and he was basically a non-factor for most of the game.”

Mashpee took the lead early in the game, going up 1-0 on a goal by Nick Almeida. Gabe Perreira set it up with a fantastic move up the wing and cross to the far post.

Hull tied it up 15 minutes later, in the 26th minute, on a goal by Marois. Hull looked like it would give the Falcons all they could handle, but things turned after the goal by Palhais that Furtek called a “shot from heaven.”

Mashpee High School had a strategy against the Falmouth High School boys’ soccer team on Monday, October 7. The Clippers had an answer for it, though.

MHS attempted to flummox the Falmouth offense with an offside trap in an attempt to shorten the field for FHS and frustrate the visitors. FHS was able to shred through that trap thanks to seniors Thomas Charrette and Coleby Andrade. With adept passing by that pair in the midfield, the Clippers were able to lay out perfect lead passes early in the game that led to prime scoring opportunities.

With three goals in the first half, including two by Daniel Holt, Falmouth powered by its neighbors to the east by a 4-0 score. FHS improved to 4-6-1 overall with the win, its second in a row.

“Dan broke it open for us with those two quick goals, poised play in the box by him,” Falmouth coach Bill Andrade said.

The first goal was a thing of beauty for the Clippers in the ninth minute of the game. Charrette feathered a pass up the middle of the field, timing it perfectly with a burst of speed by Holt. The ball rolled past the defenders just as Holt found an extra gear. He ran on it and went in uncontested against MHS goaltender Luke Olson, who was hung out to dry.

Eleven minutes later the Clippers struck again with a similar goal. Andrade threaded a pass through traffic for Holt this time and the junior did the hard work, wheeling through a number of defenders to get to the net to make it 2-0.

Andrade made it a 3-0 affair with less than three minutes to play in the half with a nice move through the middle. In the second half Gabe Girourd put home a feed from Charrette to finish off the scoring.

“We’ve been working the trap, and it’s been tough because we’ve had guys out injured, and there’s not the consistency that you want,” MHS coach Ed Furtek said. “The trap, you’ve got to be consistent. The idea is to squeeze the space a bit, and give the other team less space to operate in. When it works it’s great, but when it doesn’t you have to be ready to get back real fast or have your goalie make some saves one-on-one.”

Mashpee’s offense had a hard time getting on track throughout the game. The Falmouth back line was very strong, keeping the ball to the perimeter for most of the day thanks to the play of Alec Small, Nick Harden and Rowan Gallant. Goalie Gio Borgese earned his first career shutout for the Clippers, making a couple of tough saves.

Mashpee nearly broke the shutout before Falmouth had even gotten on the board, early in the first half, but a shot from the doorstep by Nick Almeida popped over the top of the net. Almeida had another chance late in the first half when his team was still within two goals. A free kick from Dylan Barger, from deep in his own end of the field, sailed to the top of the Falmouth box, where Kyle Soares headed it along for Almeida. This time a flick by Almeida went a bit wide. In the final minute of the first half Borgese made his best save, diving to his right to rob a bid by Almeida.