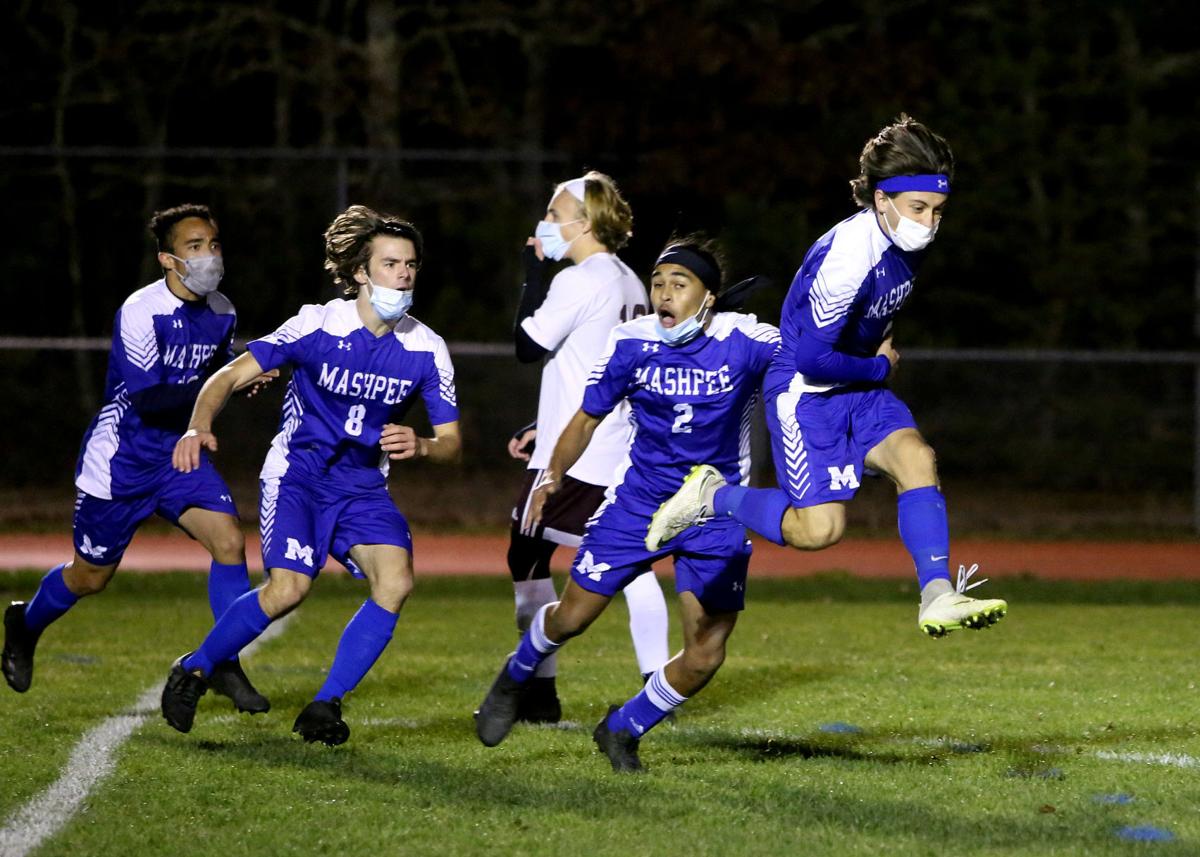 The Mashpee boys’ soccer team celebrates the game’s first goal, by Gabe Palhais (in air), during the team’s 4-1 win on Tuesday evening at Horne Stadium in Mashpee. 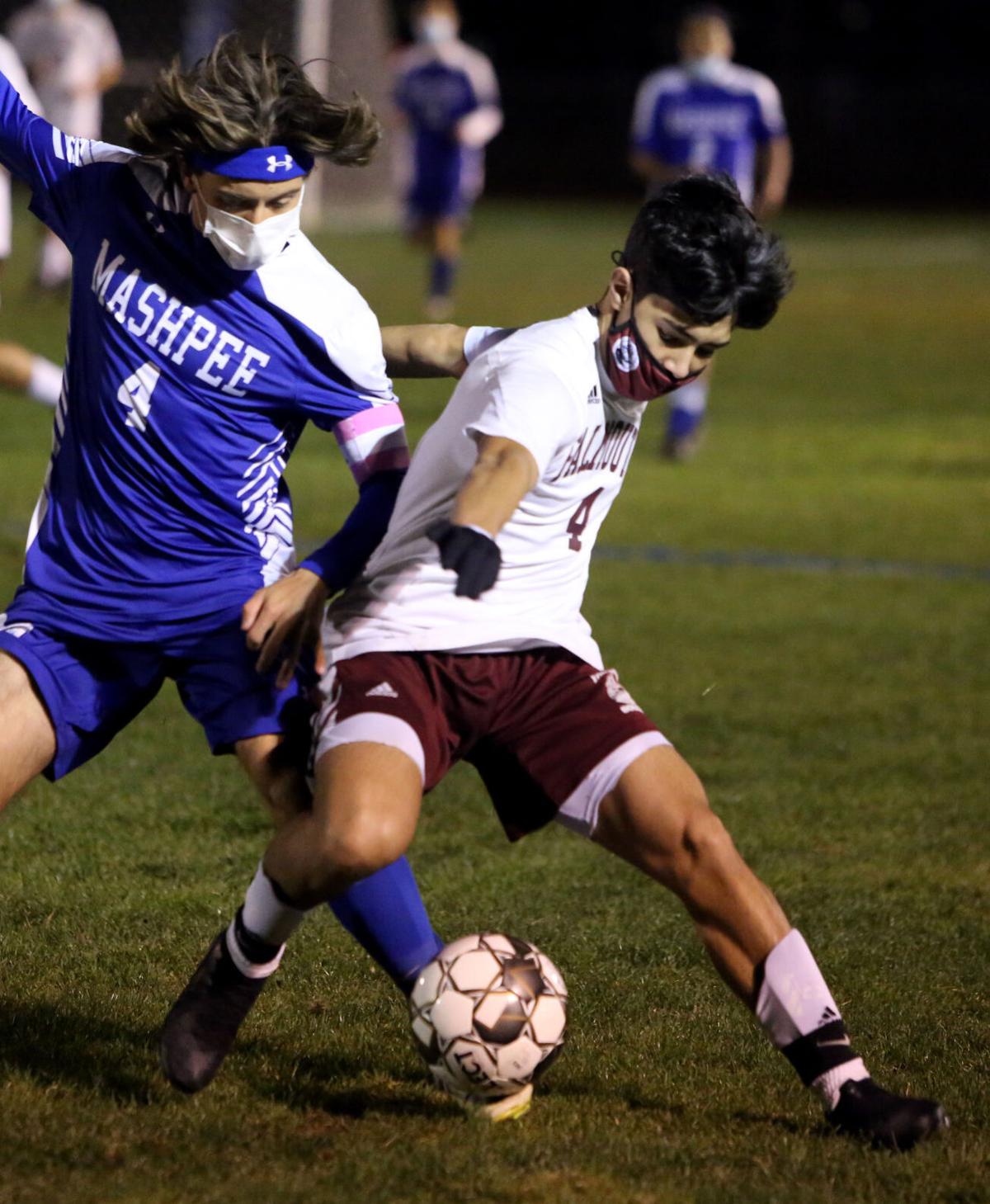 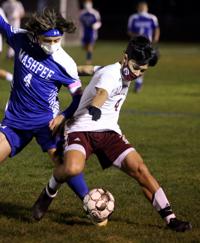 The Mashpee boys’ soccer team celebrates the game’s first goal, by Gabe Palhais (in air), during the team’s 4-1 win on Tuesday evening at Horne Stadium in Mashpee.

On Senior Night at Horne Stadium the Mashpee High School boys’ soccer team realized something that the visitors from Falmouth High did not until it was too late. MHS played with passion and intensity from the opening whistle, knowing that after 80 minutes had been played on the pitch that there would be no more soccer games this year.

For the seniors on both sides, that meant no more high school soccer at all once full time had been achieved.

The Falcons exploded from the opening whistle and rocked the Clippers early, scoring three times in the first quarter to open up a commanding lead. Despite being outplayed by Falmouth for a good portion of the following 60 minutes, Mashpee eased to the finish line to take the game by a 4-1 count, ending its year on a very high note.

“It’s good to get a win like that and play with the boys like we always wanted,” MHS co-captain Gabe Palhais said. “For our last game ever, that’s probably one of the best things ever (to defeat Falmouth) for us. It was hard for us the first and second year I played, and even harder last year, and this year we made it happen.”

Palhais got the team going with the first goal just four minutes into the game, popping one in during a scramble in front of the Clippers’ net.

Moments later Mashpee got another one as senior Caesar Hendricks collected his first varsity goal by touching in a lob out of the corner to double the lead. It is believed that Hendricks became the first Falcon to ever both score a goal for the varsity soccer team and a touchdown for the varsity football team. Both sports typically are played during the fall, but with no football this autumn Hendricks was the lone football player to try the Euro version of the game.

With two minutes to go in the first quarter Gabe Perreira-DaSilva made it 3-0 with a bomb from the top of the zone. Jack Richardson stepped in front of the shot but could not hold onto the high-speed offering.

Matthew Fisch, Jake Cutter and Robbie Foster all got the Senior Night start for MHS and brought something extra to the lineup that inspired the Falcons, head coach Ed Furtek explained.

While Mashpee was flying, the Clippers could not get off the ground. Co-captain Eben Delinks, who scored the lone FHS goal, said he felt like his squad waited too long to find its game.

“We came out too weak,” he said. “We didn’t have the energy. Once we got rattled, though, I think we started picking it back up, putting in some more effort and we were able to pick it up, we just weren’t able to break lines.”

FHS coach Dave Plourde said the first quarter was an accident, of the motor vehicle variety.

“We got hit by a truck,” he said. “We talked about the rivalry, and being the neighbor and all of that, but it wasn’t enough. We were flat.”

In the second half especially, Falmouth picked it up and turned the game on its side. Mashpee grabbed a 4-0 lead when Gabe Tellez banged in a rebound of a Nick Almeida shot in the 56th minute, but Falmouth clearly had more chances. The Clippers tied it on a gorgeous play that saw Gerald Mahoney feed the front of the net for a one-timer by Delinks two minutes after the last Mashpee goal, making it 4-1.

On some nights Falmouth would have come all the way back, especially the way it was pressuring the MHS end, but Luke Olson was not having it. The MHS keeper was fantastic, making remarkable save after remarkable save.

The biggest robberies made by Olson came on a 30-yard volley by Nathan Chbarbi that was labeled for just under the bar, and on a leaping bicycle strike by Lucas Reis off a feed from Delinks. Thad Lincolne was also robbed on a run up the middle, and FHS had a couple of nice bids sail just wide or high.

“I’d be lying if I said I wasn’t disappointed with the effort in the beginning,” Plourde said. “But, we reeled that in during one of the intervals and started to put some things together, but their goaltender was standing on his head. How he got to Nathan’s drive, from outside the box, and he had a couple of other saves, and how he got to Lucas’s bicycle kick, I don’t know.”

Furtek said Olson was fantastic, and gave his team exactly what it needed.

“He kept us in it. They very easily could have scored five or six more goals. He was tremendous, what a difference maker.”

The coach also said his defense was strong. He pointed to the play of seniors Will Baker and Ben Kennedy in particular.