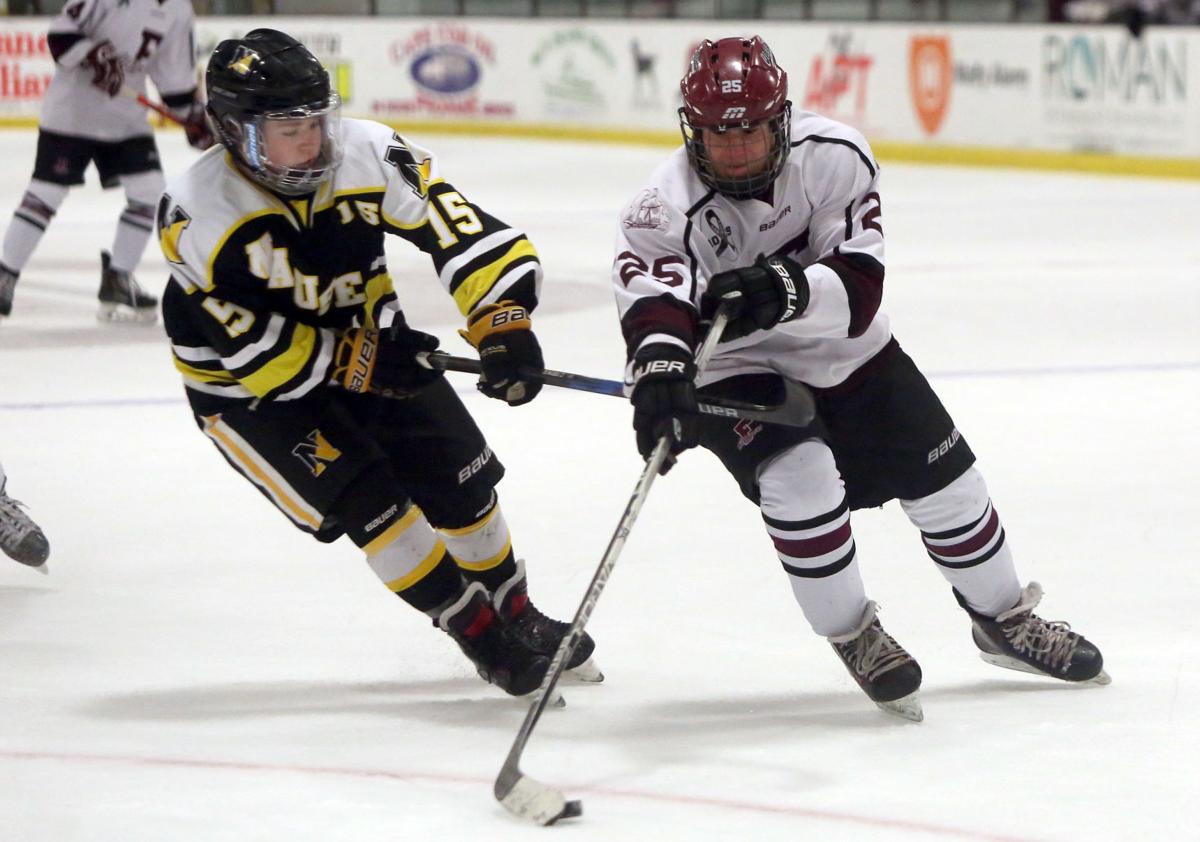 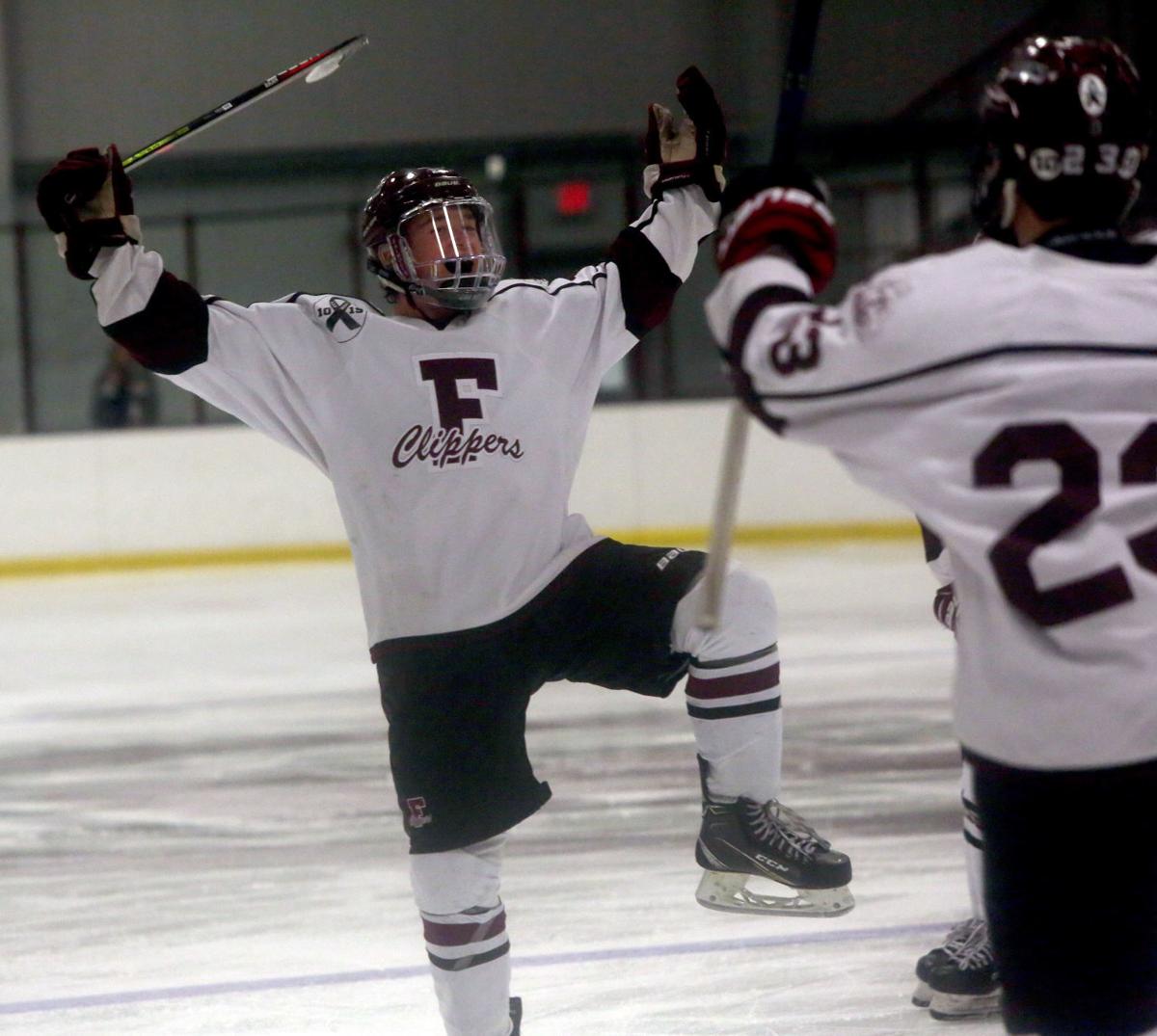 Sophomore Kyle Souza celebrates his first goal of the season, which came early in the second period against Nauset High on Saturday night. Falmouth won 7-0. 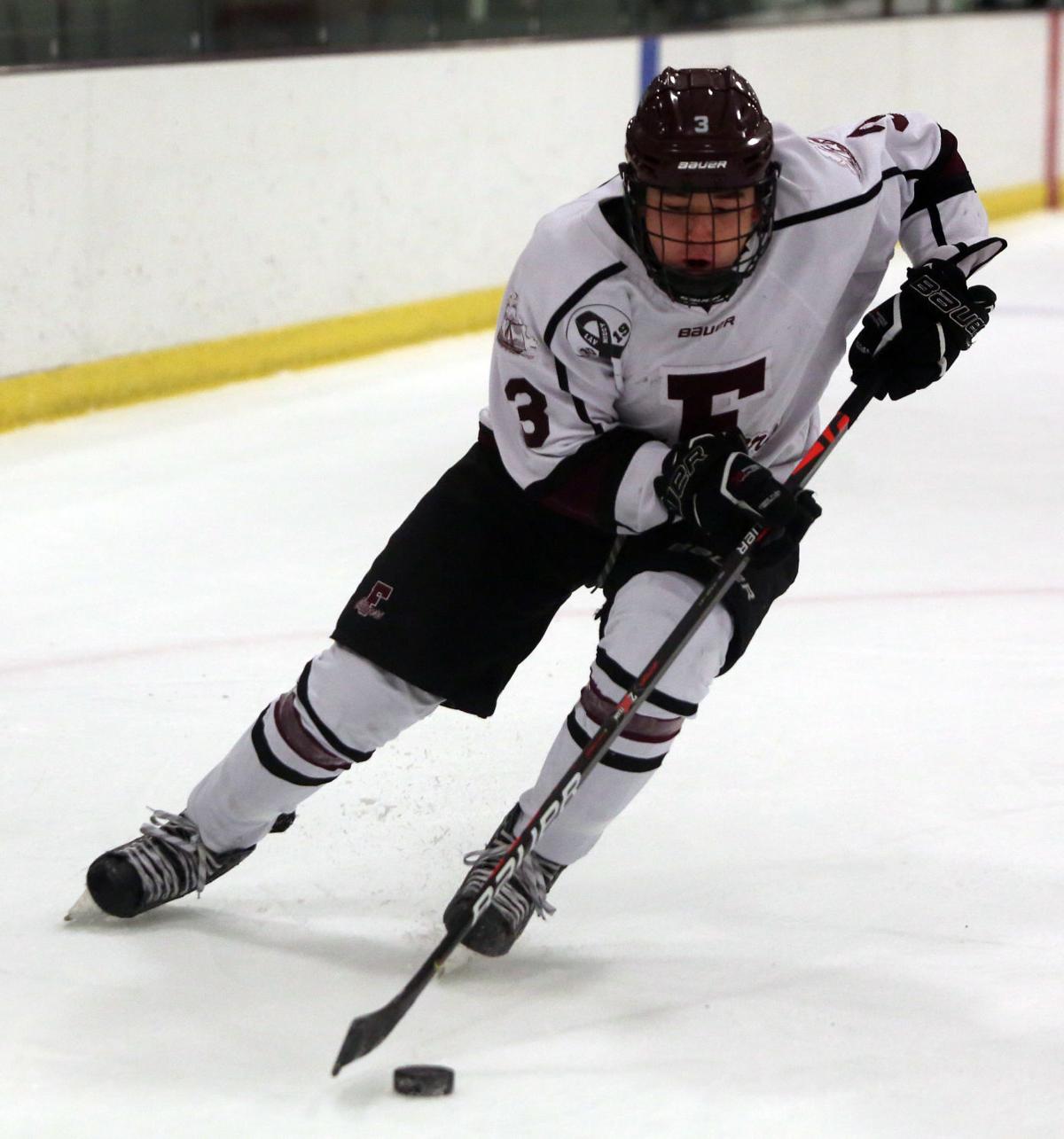 Senior James Marathas charges up the wing before dishing the puck off to Aaron Schlezinger for Falmouth’s first goal against Nauset.

It took a little over a half of a period for the floodgates to open, but once they did Nauset could not stop the offensive torrent that the Falmouth High School boys’ ice hockey team overpowered them with. Rolling four lines all evening long, the Clippers did whatever they wanted in a 7-0 shellacking of the visiting Warriors in the first Cape and Islands League game of the year for the Clippers.

Six different players scored goals in the game and freshman Stephen Mello picked up the victory in his first varsity start for FHS.

Coach Paul Moore took the victory in stride. Entering the game his team, which is now 6-2 overall, was just on the outside looking in at most statewide Top 25 polls. Nauset (1-4-1, 0-1 C&I) had not scored a goal in its last three games prior to facing FHS, and has a total of just three all season long.

“I liked our effort. It is what it is. We try to preach doing things the right way in games like this,” Moore said. “It’s good for Stevie Mello, getting a shot and getting a shutout, it’s big for him. The league games, that’s our goal right now, to compete for the league and you’ve got to get games like this.”

Sophomore Aaron Schlezinger broke the ice eight minutes into the contest with his first varsity goal, a tap-in that was set up nicely by senior James Marathas, who charged up the right wing and centered the puck to the slot. A few minutes later the Clippers made it 2-0 on the power play as sophomore Kevin Coyne netted his second varsity goal. Coyne, who potted an empty-netter last year, finished off a play from Cole Johnsen and Max McDonald.

The sophomore was a bit sheepish about his accomplishment, but certainly was happy to do his part.

In the third period the game started to get out of hand, with FHS putting two more on the baord in the first two minutes. Sophomore Kyle Souza picked up his first of the year with a wrist shot from the right point through traffic. Jake McKenzie then got his first of two for the night, on a rebound, at 1:19 to make it a 4-0 game.

In the third period FHS added three more. Eric Wainwright set up a snap by Daren McDonald 37 seconds into the period. Stone Devlin broke in to score on a dangle at 1:58 and McKenzie got another on a shot from the point at 5:23.

“We went four lines right away, the structure was there, we moved the puck and did things the right way to get ready for Saturday. We’ve got to be responsible with the puck, we have to get good entries, get pucks deep,” Moore said.

Moore said that it was nice for some of the players that do not usually see as much ice time as the top line guys be able to contribute in a big way. Marathas, who had only seen sparing time this season, was rewarded with the 10-19 Player of the Game hard hat for his effort.

“It’s a team game, and you’ve got to earn your playing time and a lot of those kids don’t get to play as much and they played tonight and they played well,” Moore said. “It’s good for their confidence, and some of these kids I saw some things where they might get a chance in tighter games... because it gives me confidence in them that I can put them out there.”

Marathas said he felt great to be able to be a factor in the game.

“It’s hard work in practice and it correlates,” Marathas said. “If you try hard in practice it turns out in the games, and it’s a fun time.”

Coyne echoed his coach and teammate. He said that the Clippers have a style of play that every line wants to emulate with each shift.

“We want every team to know that we work hard and go hard on the forecheck and get pucks deep,” he said.

The competition level moves up several notches the next time the Clippers hit the ice. FHS will be at Catholic Memorial Saturday, January 11, at the Warrior Arena, for a 6 PM tilt.