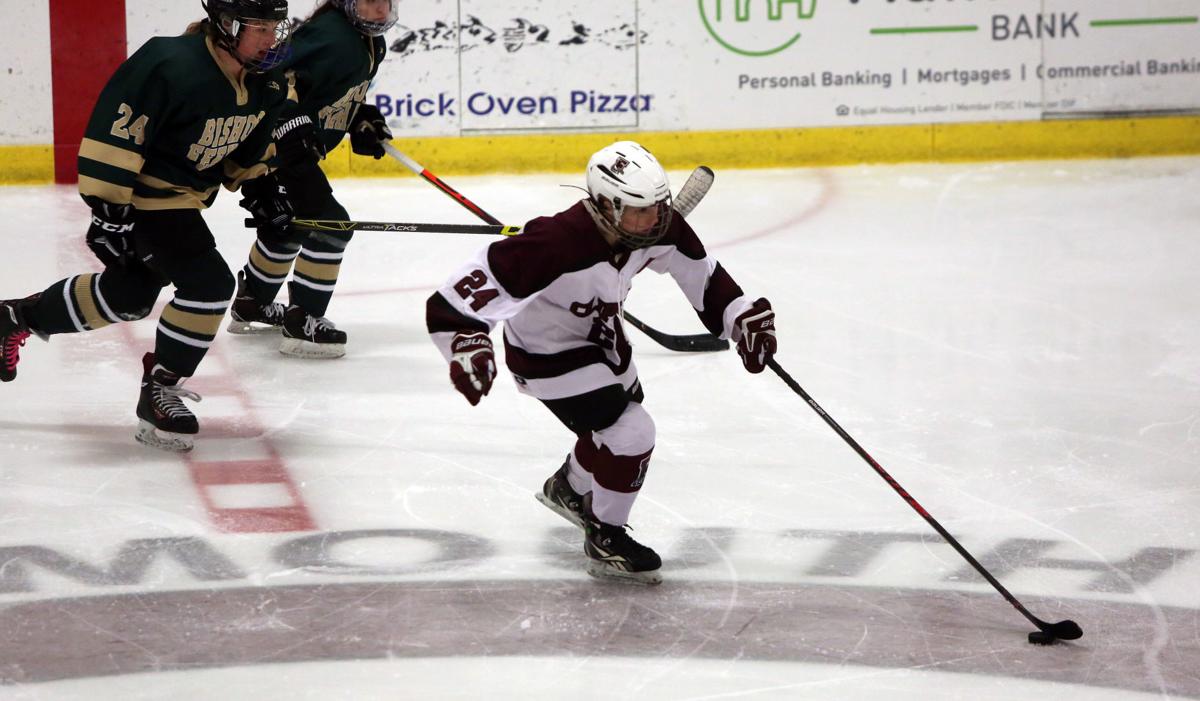 Assistant captain Brianna Waggett skates the puck through the neutral zone against Bishop Feehan last Saturday during a 4-0 Falmouth win.

Falmouth freshman Abby McDonald pivots her way past the defense and toward the Cape Cod Furies’ net during action at the Falmouth Ice Arena on Wednesday night.

Falmouth was lucky to get a point out of their game against the Cape Cod Furies on Wednesday night. The Clippers gave an uneven effort against a team that has just one win to its credit this season, and very nearly gave the Nauset-based cooperative program its second of the year. If not for a perfectly struck knucklepuck with less than two minutes to play, FHS would have suffered a loss to a team that coach Brian Ferreira said “we should beat.”

Senior Cate Brodie’s end-over-end wrist shot from high in the zone with 1:24 to play secured the 2-2 deadlock for Falmouth as they moved to 6-1-1 overall. A scoreless overtime period was played by the two teams for league standings. Had either team scored, it would not have changed the outcome for MIAA seeding purposes.

“Nauset had 12 skaters, they worked harder than us for 48 of 50 minutes,” Ferreira said. “They shouldn’t have even been able to be on the ice with us at the end, but we didn’t work nearly as hard as they did. One shift we played as a five-person unit and we tied the game up… it was extremely disappointing.”

FHS held a lead after one period when freshman Katie Shanahan one-timed home a buzzer-beater from the slot with 0.3 seconds showing on the game clock. Ryann McDonald dug the puck out of some skates from behind the net and centered it to Shanahan for a rocket that beat Connor Boucher to the glove side just before the horn to put Falmouth on top by a goal.

The lead did not last long, though. Sophie Coehlo directed in a one-handed shot on a break at the 2:50 mark of the middle frame to knot the score up at 1-1. The score stood tied until the late in the game, when things got crazy.

In a game in which zero penalties had been called since the opening puck drop, the referees awarded the visitors a power play with 4:38 left to play in the contest. The Furies’ power play provided several scoring chances, with Lucy Armour making a couple of key saves to keep the game knotted up. However, with exactly two minutes left to play, shortly after the completion of the power play, Armour made a kick stop that put the puck right onto Julia Weiner’s blade at the bottom of the right wing circle. She snapped it home at the 13:00 mark and gave the Furies a lead. Like the one Falmouth had earlier, it was shortlived.

Playing the one shift of the night that coach Ferreira was truly happy with, Falmouth fired right back to get the puck in the offensive zone where it found Brodie up high. The senior, who had scored goals as an eighth grader and as a sophomore, snapped a shot toward Boucher that fluttered through traffic and through the keeper’s five hole to tie the game with just 1:24 to go on the clock.

Boucher was the reason that Falmouth did not win after that. Just moments later Megan Azzato’s redirection from the doorstep was kicked aside by the keeper. Then, eight seconds after that, the goalie gloved a hard Sam McKenzie offering.

In the overtime Falmouth had several chances to get the winner—for league purposes—but Boucher stopped them cold. Both Azzato and McKenize came close. Then, with 1:45 left in OT, Coehlo stung a shot that hit a Falmouth stick and trickled past Armour, but not over the goal line. Azzato won a foot race to the puck and cleared it off the line to preserve the draw. The tie was the fourth in a row for Cape Cod, which is now 1-3-4 overall.

Last Saturday, January 4, Falmouth beat visiting Bishop Feehan by a 4-0 score. The Clippers scored two goals in the first period and two in the third to take down the Shamrocks.

Shanahan got things going for Falmouth with an early snipe, and then Taytum Cox snapped a shot through the five-hole, off a feed from Natalie Bosselman, late in the period to double the lead. Ryann McDonald scored a pair in the third period for the Clippers.

Falmouth will look to bounce back Saturday, January 11,on Nantucket. The Clippers take on the Whalers at Nantucket Ice Arena at 5 PM.